UK hip hop legend, Verb T, and pioneering producer, Pitch 92, have teamed up on their new joint album, Good Evening. The album is a glorious blend of funk and soul based hip hop beats and Verb T’s thought provoking, and often self-aware, lyricism. The record was written over a three year period and features guest appearances from across the UK hip hop scene. FMS were lucky enough to catch up with the duo ahead of the release of the album.

Good Evening came together after the pair had crossed paths whilst on tour, starting at a Fliptrix album launch in Brighton three years ago. From there, Pitch produced three tracks for Verb on The Mouse Outfit record Step Steadier (2015). More tracks followed over the intervening years and eventually they developed a vision for how the record would come together and Good Evening was born, an organic collaboration of two artists with shared ideals.

Modern technology facilitated the recording of the album, as Pitch and Verb spoke a lot on the phone and online during the making of the album, with beats and lyrics put together separately. Pitch would, “send Verb batches of beats periodically [from his base in Manchester] and he would write and record in a studio in London.” Pitch would then receive a rough guide of each track back to structure the tracks and record. Despite this very modern, remote approach there is still a cohesion as you listen to the tracks and it does not suffer from the sensation of being phoned in. UK hip hop stalwarts Jehst and Chemo helped engineer the record as well as featuring on some tracks.

Lyrically, there are moments of stark honesty and self-reflection from Verb across the album, as he continues to prove why he is such an important figure for UK rap fans. He, “never lost the love for making music, the art of rhyming and constantly staying sharp at it.” This passion has long come across in his releases and Good Evening is no different. Tracks such as ‘I Arrived Late’ present a powerful and engaging lyricist who can capture the emotions of daily life in a way most musicians can only aspire to. As a member of supergroup, The Four Owls, he has enjoyed international success and tours, but working solo allows Verb ‘a bit more freedom’ to decide content and sound, whilst benefiting from the competitive spirit which underpins their work together and drives standards ever higher.

As well as Verb’s lyrical prowess, the other defining feature of the album is the standard of production courtesy of Pitch 92. The roots of his style lie in his childhood, having grown up in Germany and Switzerland and been inspired by a group called ASM at the early age of 10. Pitch ‘was hugely inspired by their stuff’ and asked producer Fade to show him how to use an MPC. This provided a gateway to the likes of Madlib, J DIlla, and MF Doom, which is mixed with the influences of funk, soul, jazz and prog rock. This mixed stylistic palette is reflected in the lead singles from Good Evening, including ‘Sugar’, with its horn lines and organ riff, proving why he is such an influential figure.

Through The Mouse Outfit, Pitch has also been able to provide a platform for many emerging Manchester artists, with Sparkz and Black Josh featured on the album. There are also spots for High Focus recording artists such as Fliptrix, Ocean Wisdom and King Kashmere. Verb credits the label’s success with both their energetic live performances and label head Fliptrix’s work in, “building up the platform and pushing the audio and video content consistently.” The Good Evening collaboration has allowed Pitch and Verb to benefit from this international platform, with the video to ‘Getaway Car’ almost cinematic in scope and helping elevate their music to another level.

The result is a project which marks another high point in the already stellar careers of Pitch and Verb. There is a consistency throughout, with Verb asking that people, “give this album a few listens from start to finish on a flight or long car journey or something,” to really appreciate it. No doubt fans will be more than willing to give the record the time and space it deserves, as expectations continue to build ahead of the release date.

Good Evening is due to be released via High Focus Records on October 6th and can be pre-ordered on CD/ vinyl HERE or digitally HERE.

The duo are also in the process of booking an album tour to showcase the music, with details to follow. 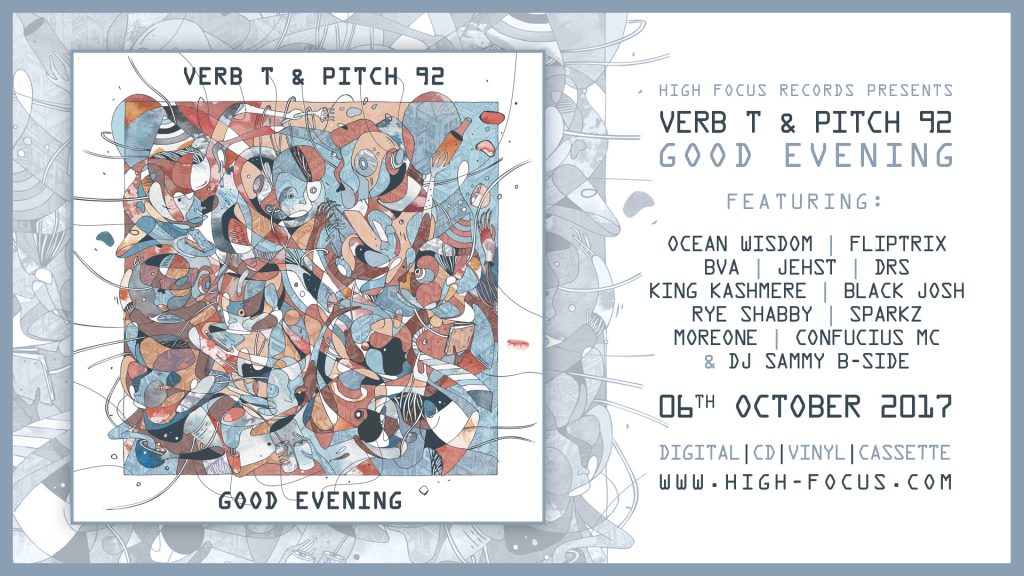