“It’s horseradish moonshine. I get it from a guy in Kiev.” The best there is, according to Gleb Lisichkin, ГШ’s manager, who smuggled it to Reykjavik in a steel water bottle.

I couldn’t argue with that assertion. I had no reference point. I love horseradish, it was long past the time when people have their first drink of the day at Iceland Airwaves, and I hadn’t had mine yet.

“Bud’em” I said, repeating the toast I’ve been taught by the band, taking down the first of many in two swigs.
And this is how I ended up interviewing my new favourite band while drunk on contraband hooch.

I first saw ГШ last April at the increasingly hip Tallinn Music Week. The schedule was mostly packed with acts I wasn’t familiar with, so I decided to fall into the slipstream of my friend Bernadette, who knows a thing or two about music. It’s an exciting time, since the world is no longer caught in a stranglehold dominated by U.S. and U.K. gatekeepers, and I wanted to see what the rest of Europe had on offer these days. That week I saw jaw dropping performances by Denmark’s The Entrepreneurs, Russia’s Lucidvox, and Estonia’s guitar hero in the making, Erki Pärnoja, all of whom should be household names. In this age of unfettered access to music, that is now more possible than ever. We are all potential tastemakers, and we get to pass around our discoveries.

While we were waiting for another band, ГШ started their set. Standing next to me were talismans Kevin Cole and Chris Kellogg of KEXP. It’s always a good sign when they are at shows. The band’s style was a perfect confluence of Post Punk legends, ranging from The Pop Group, The Slits, The Au Pairs, and Gang of Four, to Lene Lovich, Pylon, and early Talking Heads. Not just musically, but stylistically as well. This was bonafide art rock, which I had come to love though cult music zeitgeist films like Urgh! A Music War.

Singer/guitarist Kate Shilonosova’s stage persona and body language recalled Byrne and Bowie, as well as iconoclast, and style maven, Annie Clark, aka St. Vincent. The rest of the band, consisting of guitarist Jenya Gorbunov, drummer Alexey Evlanov, and bassist Yegor Sargsyan, followed her lead, and had her back, freeing her up to do anything. Jazzbos invented the term ‘shit hot’ to describe musicians of their calibre. It was the first time any of us had seen the band, and it was clear we were witnessing something special.

ГШ started life as Glintshake, a band solidly rooted in ’90s revival who gave no hint that they would soon rip it up, start again, begin singing in their native Russian, and spelling song titles in cyrillic. The name change was part of that transition, but with ГШ phonetically sounding like ‘gleh shuh,’ it’s a reference to their former incarnation. In true punk form it was an act of rebellion, perhaps bigger than they anticipated, as I discovered while reaching out to potential fans in the U.S.

“‘Glintshake?’” I’d hear,  “I looked them up. They don’t sing in Russian and it’s not as angular as you describe.”

“No, no,” I’d constantly find myself saying, “you have to spell their name, uh, kind of like a capitalized version of a lowercase ‘r’ and ‘w.’ It’s in cyrillic! You’ll have to cut and paste ‘ГШ’ into your browser… I guess.”

“I don’t know how the hell to say it. It’s spelled in Russian! Just play the third one and the last one on the record and you’ll get the idea!”

I’ve never had a harder time promoting a new discovery, but Dave Allen, a founding member of Gang Of Four responded: “After seeing that live video of a performance at 16 Tons I’m convinced they are the real deal. I don’t understand the lyrics, but musically they are exceptional. [Получеловек] incorporates Talking Heads-style rhythm guitar, which is quite a feat to pull off. I’m interested to see what they do next.” 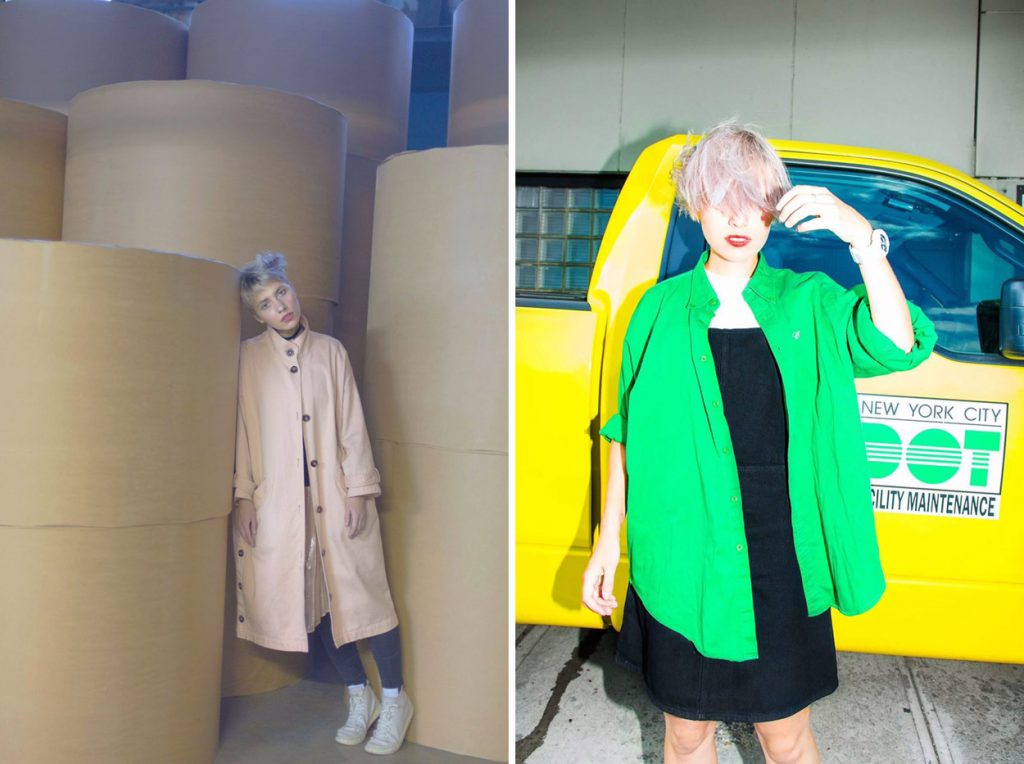 So, six months later I found myself at the KEX Hostel in Reykjavik where, coincidentally, KEXP was showcasing their discoveries of the year, including ГШ. It was  a reunion of sorts. With my brain growing increasingly more addled by the moonshine, I decided I should start the interview with the question everyone asked me when I told them the story of the band: What made them decide to start singing in Russian?

Jenya – “We were living in Berlin for awhile. One day we were walking around the area where Bowie made his ‘Berlin’ records. I was standing there at the former East/West border. It’s so modern there now. The chaos of that different time is gone, and everything is in order, whereas Russia is still very chaotic in so many ways. Right then, I began to understand my own country better. We had been trying to find our own musical language and decided we should explore our own, literally.”

Kate – “In every artist’s life there is a point where you have to stop copying your heroes. If you don’t eventually evolve it’s like a small death. In our case the ‘new language’ involved me singing in my native one. Before that it was more like playing a game, or pretending to be someone else. I’m not from the ’90s and hadn’t been to the U.S. yet. It wasn’t like anyone even expected us to sing in English, it was just the first step we chose to take. Switching to Russian didn’t mean rejecting everything all of a sudden, but we did start focusing on our natural abilities. Improvisation became more like having a conversation, like you and I are having now. We’ve had different experiences, but we’re able to sit here and talk to each other. So this change felt like opening the window, and was more unpredictable than we expected.”

It must have presented some real challenges in the searchable world, though, right?

K – “The decision to sing in Russian was based on no longer caring if we became popular around the world, or thinking anyone abroad might Google it. Singing in English there may have been that expectation. When you’re swimming and you expect the bottom to be there, but there’s nothing, your choices are to either surface or sink. So, the bottom wasn’t there, and we realized that wasn’t the reason we were making music in the first place. When we rejected what we thought we were expected to do things started to happen.”

Did that feel like validation for trusting your instincts?

J – “Right after that change, people outside of Russia actually started noticing this weird combination of letters. When the songs were in English people asked why we didn’t sing in Russian. Now they are in Russian and we get asked why we don’t sing in English. I feel it’s irrelevant. Moomintrolls are very popular in Russia. Even though they are very Nordic everyone can follow the storyline.”

K – “In the end it doesn’t matter. I’m proud of the songs and feel they would be good in any language. The world changes every year, so do I, and though I don’t mean it to sound as pretentious as it does, it’s important for me to make music that reflects where my soul is now. I’m certain that will be the case next year too.”

Do you feel connected to what’s happening in Moscow now?

J – “We don’t know our place in our scene, which has a strong connection to what comes to mind when you think of ’80s Post Punk. Our influences aren’t the same, but it’s close enough that we play the same festivals.”

K – “I didn’t even know about that music. I found out about bands like The Slits from Jenya, later in life. I grew up listening to a lot of ABBA, pop, and classical music. I moved to Moscow and Jenya showed me a lot of post punk and new wave stuff from the ’80s.”

Does that play into the band’s sense of fashion? It seems to be a strong component.

J –  “I like to look neutral. I’m not trying to get any point across.”

K – “I feel a little bit like a character. Probably not even a girl. I’m a bit mannish. I usually wear a suit three sizes too big. I’ve even borrowed clothes from our drummer, Sasha. He always saves the day. He lent Yegor a t-shirt today before we played, in fact.

“As a performer I can explore myself more as an androgynous character. I feel that’s the way I need to look to say what I’m saying and translate the songs, since a lot of people don’t speak Russian. I don’t understand any of the Japanese music I like. It’s a complicated language and it’s hard to Google lyrics. I have before, though, and found out many of the songs were actually what I thought they were about. From that point on I decided language was secondary to ГШ, and that it’s more like another instrument. That’s what the Futurists were trying to do. They were deconstructing the language, and breaking up the syllables, to get people to feel the poem without even paying attention to the words.”

You often mention The Russian Futurists, Dadaism, and Absurdism as a big influence.

J – “Well, Russian life is absurd. The only way to survive is to be ironic or you’ll slip into a real depression. It’s how we deal with reality.”

K – “It’s hard to explain to someone from the U.S. Maybe they are getting some of the same vibe with Donald Trump, but it’s only starting, and we’ve been dealing with this shit for centuries. It’s not only easier, it’s healthier to joke about it.”

So that level of cynicism produces great art?

K – “I think it’s more accurate to say sometimes things actually do grow in a wasteland. You get a harvest, but nobody can tell you how it happened so they can’t repeat it. That’s what happened with the Russian Avant Garde. Nobody knows how it happened. Russians don’t even understand the impact of our own legacy. The biggest collection of it is in Chicago, so Russians who write about it have to travel to the U.S. Everyone in America. 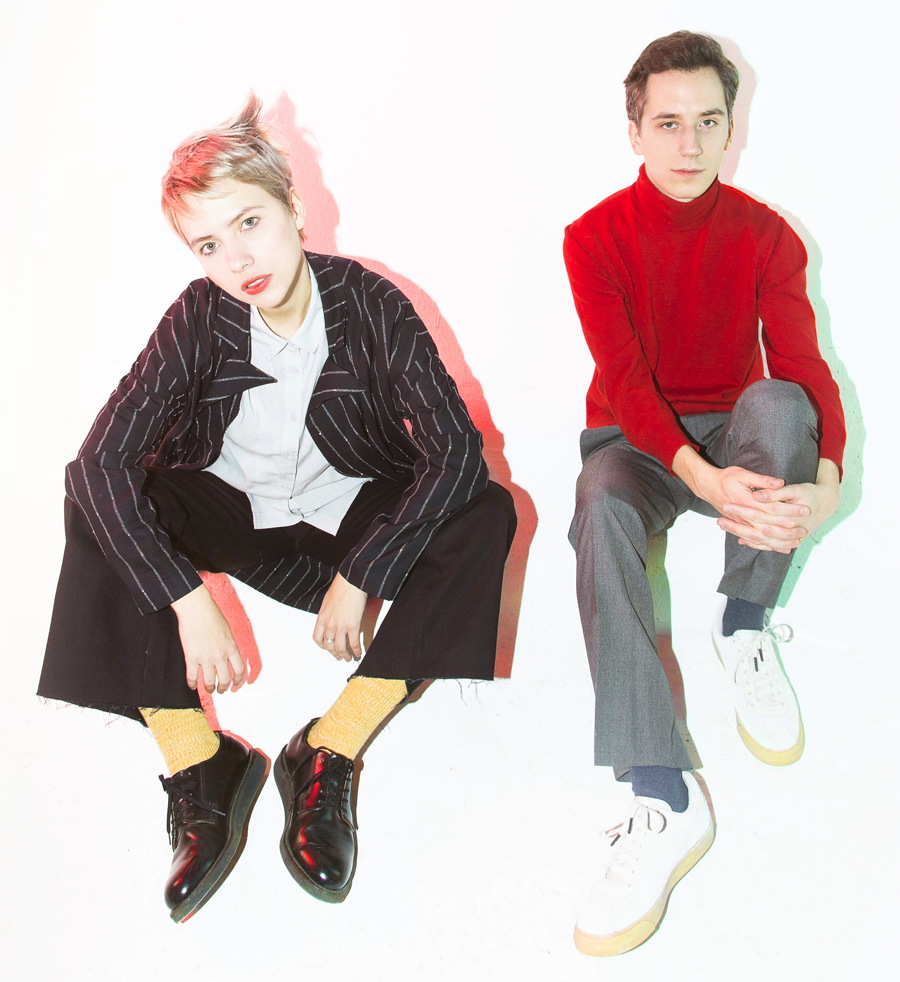 seems to know what to do to make a certain thing. So Jenya and I had these conversations about it. We were interested in how those connections are lost and how they can be made, which led to the beginning of ГШ. We lived together and we both played guitar. In those cases it just makes sense to form a band, otherwise you’re just wasting your time. It doesn’t mean you’re going to have a musical connection but you need to try.”

J – “Authors talk about ‘the wide Russian soul,’ which is an allegory for vast empty spaces in our country. Russian people relate to that personally and want to fill that space, but they don’t know how. It’s why they drink a lot. It’s why they like bombastic music. The way ГШ ‘fills the wide spaces’ is with guitar improvisations. We take it very seriously, but it sounds silly when I hear myself say it.”