Third Culture Kings, a new project led by Jan Johansen (Glorybox) and Alap Momin (dälek), have just released their debut record, Is That Light You Carry?, via 100.000 and Internet & Weed Recordings.

Filtering classic vibes through modern interpretation, 3CK reimagine The Velvet Underground or Leonard Cohen as if they had been mixed by King Tubby and Afrika Bambaataa, all the while incorporating influences as diverse as Indian drone, early 80’s synth pads and Miami booty bass.

“I made Is That Light You Carry? with my friend Jan Johansen,” says Momin. “Both he and I had been doing older projects for a very long time and were burnt on our old sounds/vibes. We both needed something new to help shift our perspectives and create in a fresh new way. Besides all the new hip hop/trap, we got very influenced by modern R&B, Pop, Vogue, Juke, Jersey Club, Baile Funk, Baltimore Club, Freestyle, and more. I feel very lucky to have all these young new cats in my life giving this old man a whole new wave to work with. Hahahaha…”

As for his playlist for FMS, “I made noisy/spacey rap with my old group dälek for 15 years from 1995 to 2010. Around 2007 I heard a whole new generation and sound coming out of hip hop, especially from the South and Chicago. After leaving dälek I began working with young 14/15 year old rappers from all over NYC. They put me on to a lot of incredible tracks with an updated version of the production I had done.

“These new skool tracks became a huge part of the foundation of my new sound I call Womb Music/Dubbed, Drugged, & Ghosted. Although Third Culture Kings is more of a pop/song driven project, I wouldn’t have been able to make the record without these new influences I’ve been obsessed with for the past decade. BIG UPs to all my young homies, keep doin your thing. This is in no particular order a taste of some of the stuff I’ve been loving.”

“The vocal and bass relationship/production is literally what I did to Jan’s voice and how I treated our subs on the 3CK album. Kanye did a lot of this on 808s and Heartbreaks a few years ago as well. Mind blowing.”

“The video rules, total psychedelic thug vibes. The atmosphere and chords really remind me of a vibe I was doin’ back in 2007 but way updated with that sub. I give the whole A$AP crew a LOT of respect cause NO NY cats were fuckin’ with the South before these guys brought the South to Harlem and The Bronx. So dope.”

“This track is so fuckin lit. It reminds me of an updated version of Outkast‘s ‘SpottieOttieDopaliscious’ which I LOOOVEE! The horns on this are so fuckin’ sick.”

“Easily one of the heaviest beats and flows I’ve EVER heard. This is the epitome of everything I love about rap old or new. And she speaks that Brooklynese which I love.”

“This was one of the first newer rap tracks that blew my mind. Total new level of blackness. These Chicago cats sound like Digital Chain Gang music. Reminds me of old negro work songs over an 808 and wavvy beat.”

“So, I live right off 5th Ave near the FDR in Harlem. I get amazing music coming in thru my windows all day and night. This is one I heard at like 3AM just LOUD as fuck bass bouncing off everything. Love the ambience/chords and laid-back beat with the aggro flow on top.”

“My teens got me into this last year. I remember being blown away. It sounds like Black Kurt Cobain/Nirvana to me. It makes me wanna mosh around my room and break everything. Fuckin’ lit.”

“Another early one I was turned onto about four years ago. One of the sickest flows I’ve ever heard! This is for them old heads who think the young cats can’t spit.”

“Mell is one of my teen rappers from Brooklyn I’ve been working with the past four years. He is one of my favourite rappers and a murderer. Hahahahaha … Zelly Klan is on the track as well and he reps Harlem like no other. Love his flow and style.”

“Maxo Kream is one of the newer cats out of Houston. He might literally be my favourite rapper at the moment. I got three of his mix tapes and they are all FIRE!!!!!! I don’t even know where to begin with him. The beat is fuckin INSANE, his flow and voice are amazing. This shit really makes old rap sound OLD. Hahahahahahahaha…”

Third Culture Kings’ Is That Light You Carry? is available digitally via Internet & Weed Recordings. Vinyl, CD, and Cassette formats are available now via 100,000. Order HERE. 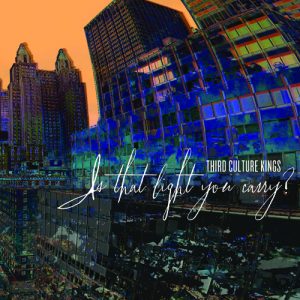