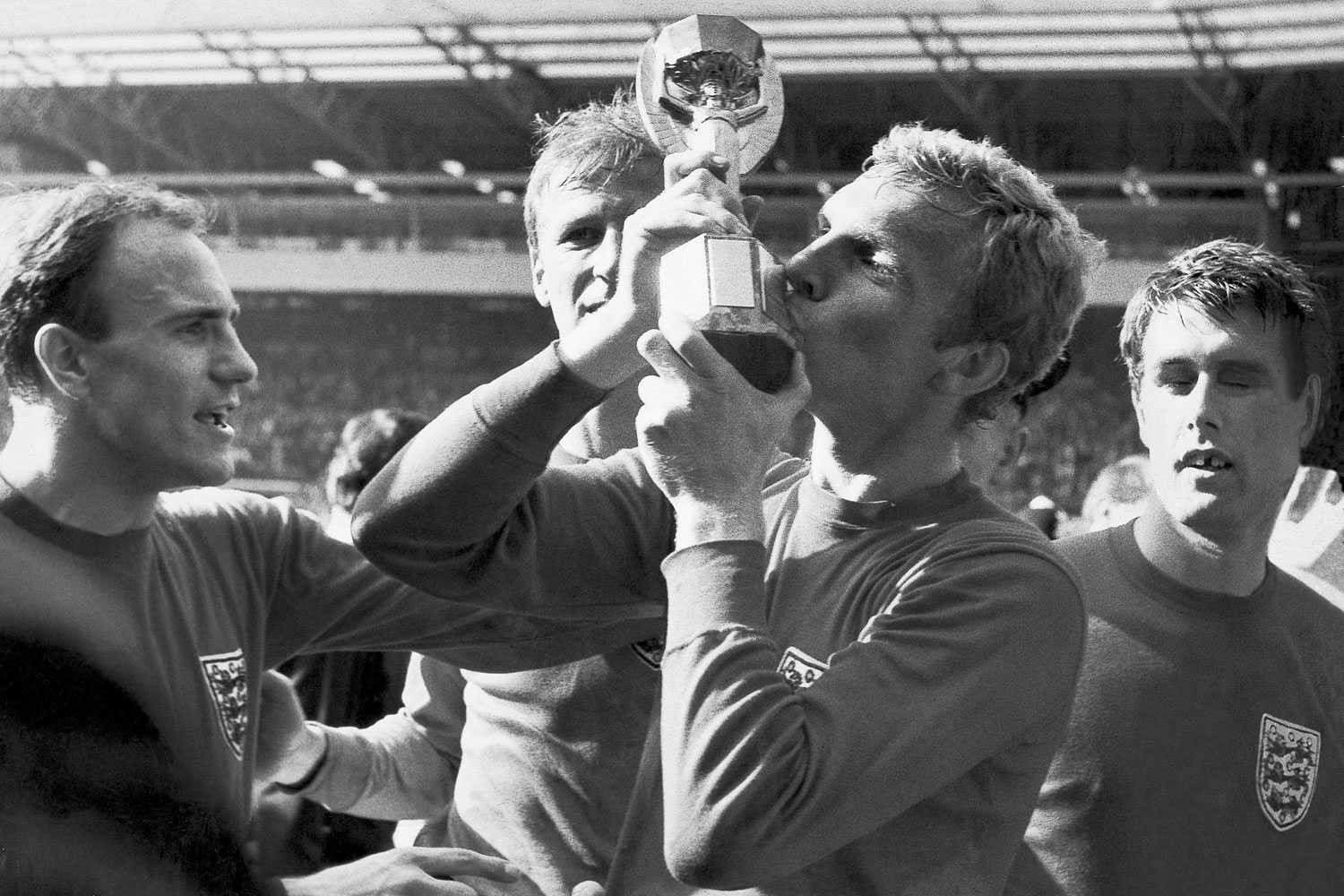 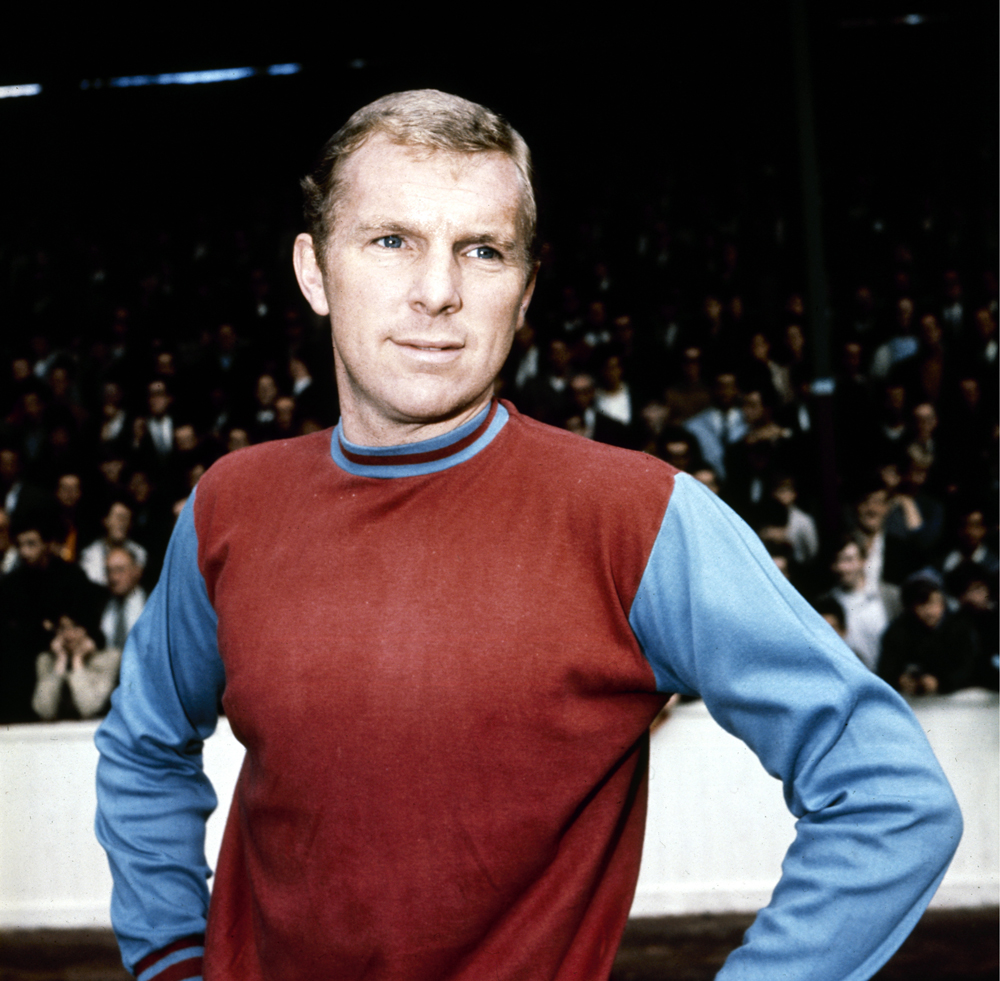 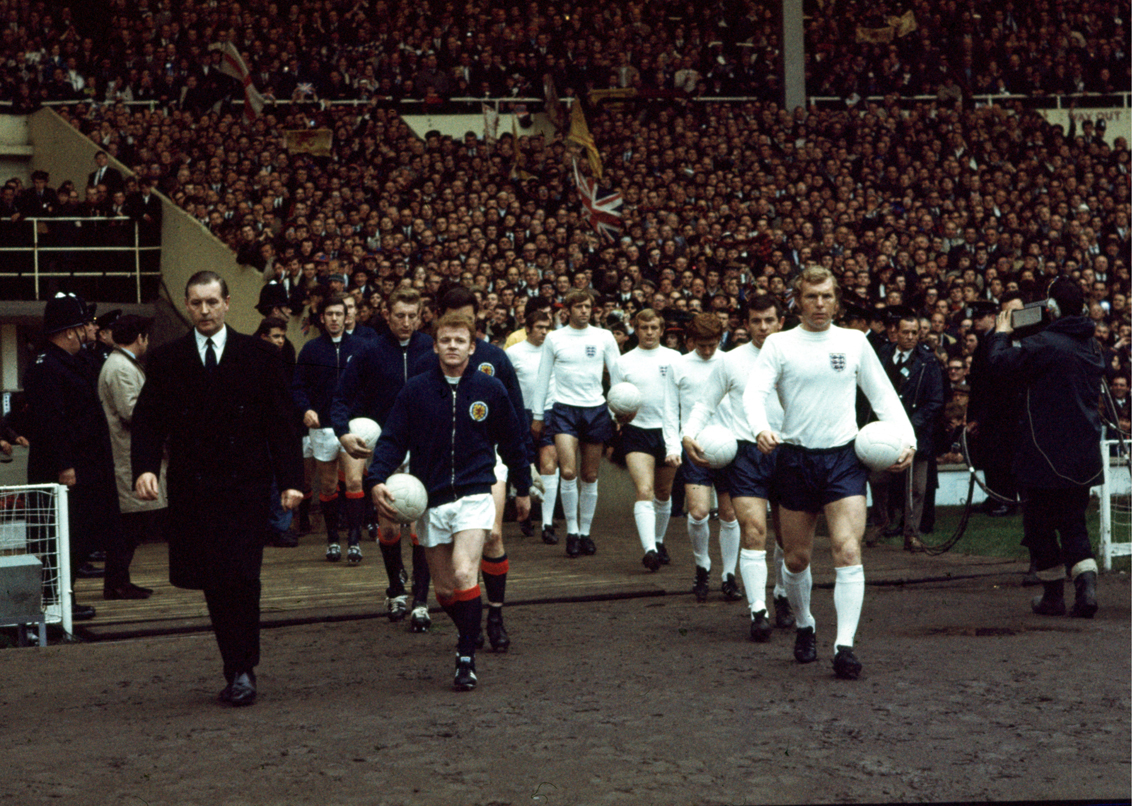 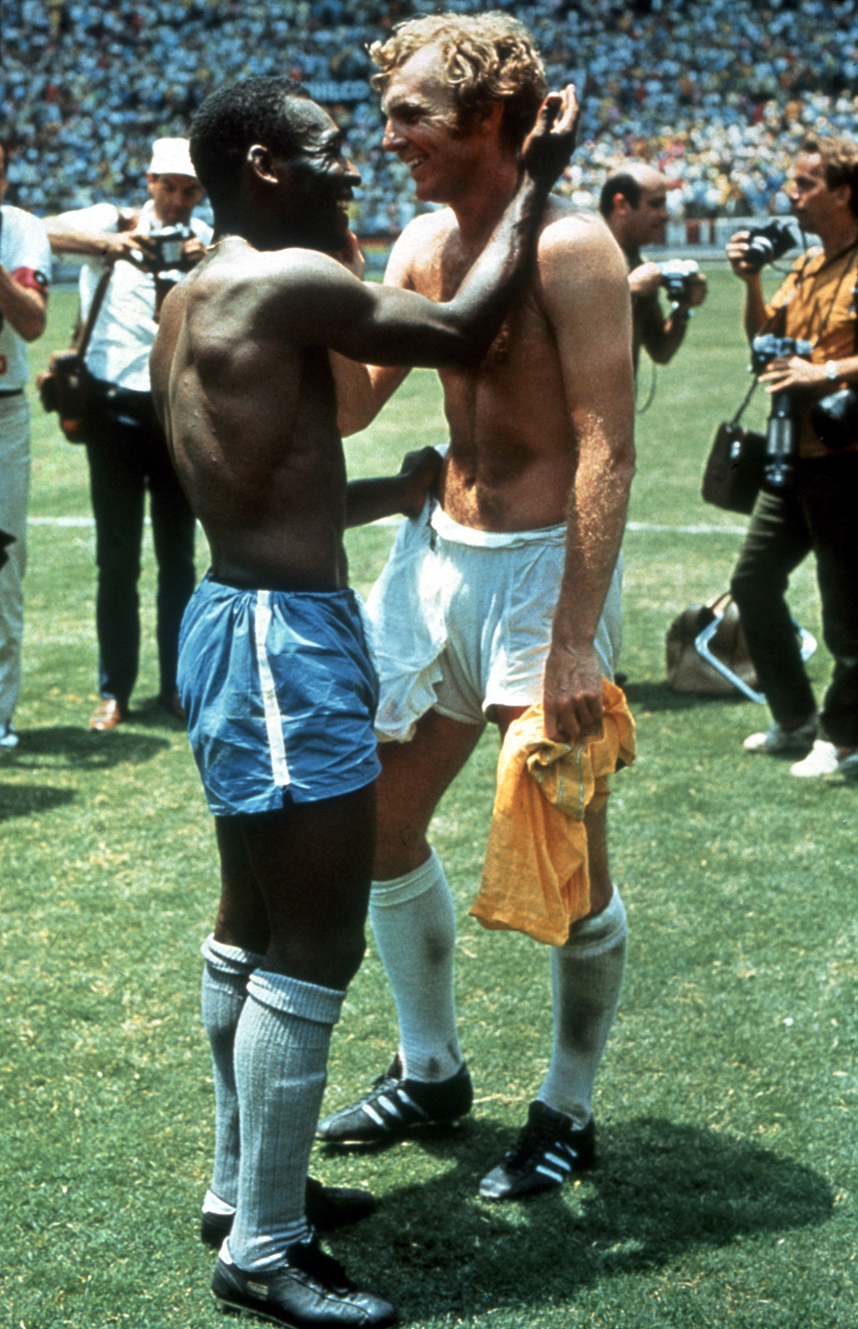 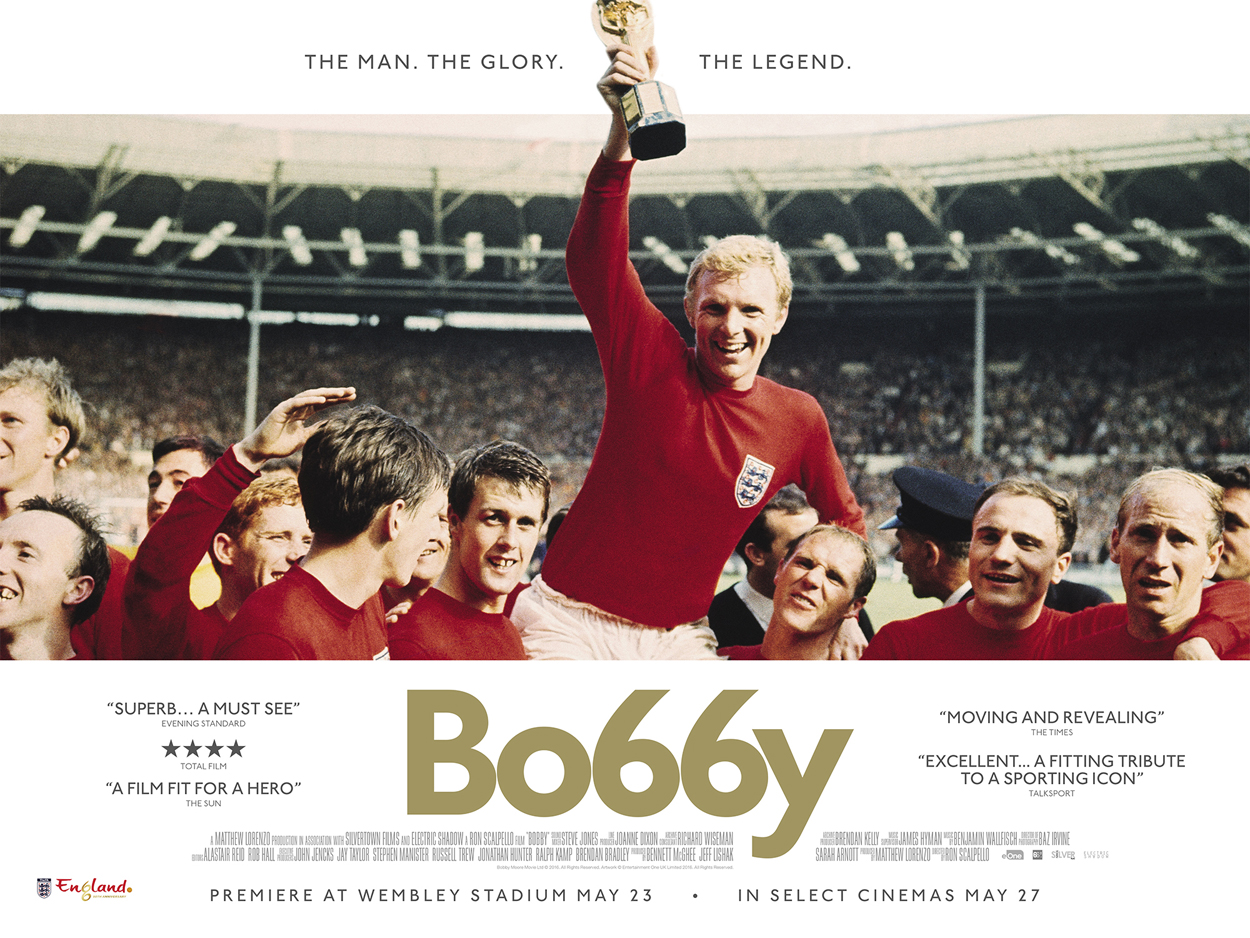 Today sees the release of BOBBY on Blu-ray, DVD and Digital HD, via Entertainment One (eOne).

Bobby Moore of West Ham United and England is a footballing legend. He is known across the world as one of the greatest defenders that ever played the game, and was England’s World Cup winning captain 50 years ago this Summer, whose life was cruelly ended far too early when he died from bowel cancer in 1993, aged just 51.

As a huge West Ham fan myself I already know everything about our greatest ever player’s achievements on the football pitch but this wonderfully, moving documentary – produced by Matt Lorenzo and directed by Ron Scalpello – also reveals what a special human being he really was, and gives such a touching insight into his extraordinary life.

Known for his calmness and film star looks, Bobby Moore was more than just a football player, he was a golden boy in a golden era with a prince like aura. This film is full of delightful footage from his early life as a player in the 1950’s, throughout the 60’s when he met his wife and had his two children. He held the World Cup aloft for England and became a celebrity, hanging around with the likes of The Beatles, The Rolling Stones and Sean Connery.

The snippets of his footballing talents are wonderful, as are the ones of his endearing interviews. Tracks from the sixties are played occasionally, including ‘You Really Got Me’ by The Kinks. Even their great front-man and song-writer Ray Davies himself appears to poetically describe Moore.

His former West Ham and England team mates, including Geoff Hurst, Harry Redknapp and George Cohen, comment fondly on those glorious years in the 1960’s, as well as his pal and journalist Jeff Powell on how they grew up in the East End of London, in a bygone era where many players played just as hard down the local pub or night club, as they trained during the day on the training ground.

His first wife Tina, who married Bobby in the early sixties, and daughter Roberta both speak so eloquently and lovingly throughout the 90 minutes, that you can’t help but well-up on several occasions. Tina is the one who gives the most insight into the man, as she reveals what a romantic he was in those early years and how nobody outside of their family had realised that he battled back from testicular cancer at just 22, to captaining England to World Cup glory just a few years later. Tina Moore really does do a sterling job in portraying the great hero that he was and is.

She also reveals how Bobby went through what appeared to be depression after his career ended. He had inexplicably struggled to find a job in professional football as a manager or coach. It seemed to stem from when he was wrongly set-up for stealing a gold bracelet during England’s tour of Colombia, just before the 1970 World Cup.

It’s at this point in the documentary that it turns to the dark side of his life for a long period as the constant rejection and bad business deals lead to bankruptcy, ending up costing the couple their marriage, but she still speaks with such love and affection. Heart-breaking.

The establishment at the FA had let him down, by not offering him something when they he surely had so much to give, even as an ambassador of the game, and West Ham were no better in their treatment of their former player who they appeared to ignore. Bobby struggled away, writing for the Sunday Sport and working for local radio. What for? All because of that stitch up in 1970???

His second wife, Stephanie Moore, speaks later on in this documentary, just as you start feeling depressed yourself about how things had turned out, but she speaks wonderfully as well about how he was in his final years, and how he handled cancer the second time around so admirably. It was bowel cancer that eventually killed him and again he kept it away from the public eye, even being able to commentate on an England game versus San Marino in 1993, just one week before his death, so that he could say goodbye to the place he loved the most, in his own private way.

Jonathan Pearce, was clearly touched by his short time in the company of Bobby Moore, when they were colleagues at Capital Radio. He too speaks with such genuine emotion about his time in the commentary box and lets us know about how much Bobby still cared about England, revealing that Moore was in ‘floods of tears’ when England lost the World Cup Semi-Final to West Germany in 1990.

Not enough was done to honour Bobby Moore during his life, and the documentary ends with his death, showing how it was only then that the FA and West Ham realised just what they had lost. Although some will say it was too late, there have been fitting tributes with statues being built outside Wembley Stadium and in East Ham. His second wife Stephanie was thought to be instrumental in making these things happen, and also set up The Bobby Moore Fund for Cancer Research.

BOBBY ends on that positive note, with further footage of his coolness and calmness on the football pitch during the credits. Sheer class.

Lorenzo’s documentary is not flashy but it didn’t need to be and is a fitting tribute to one of the greats of the East End of London and England. 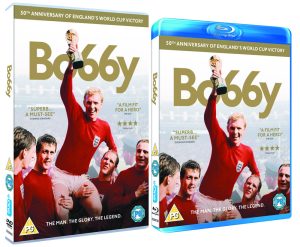