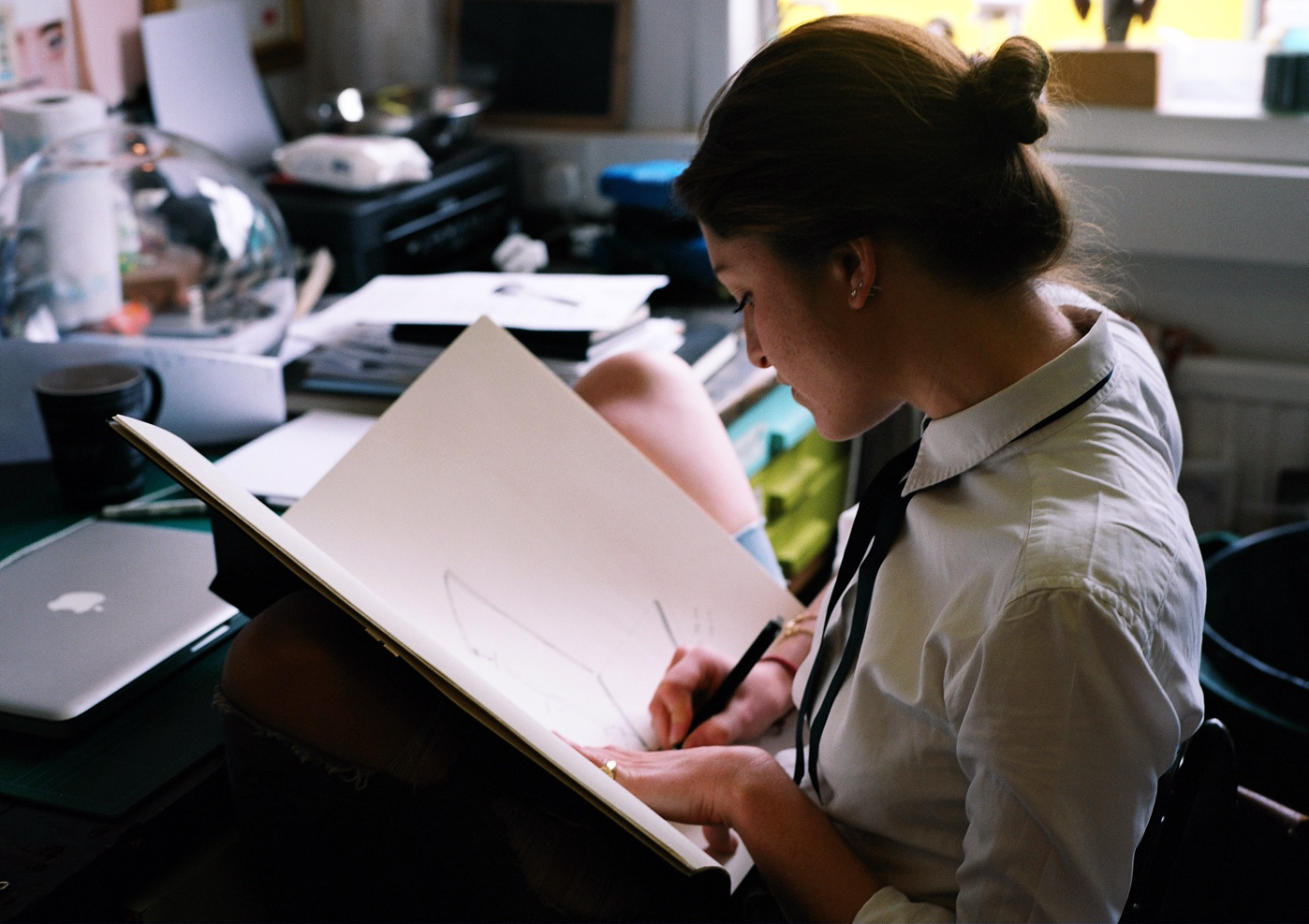 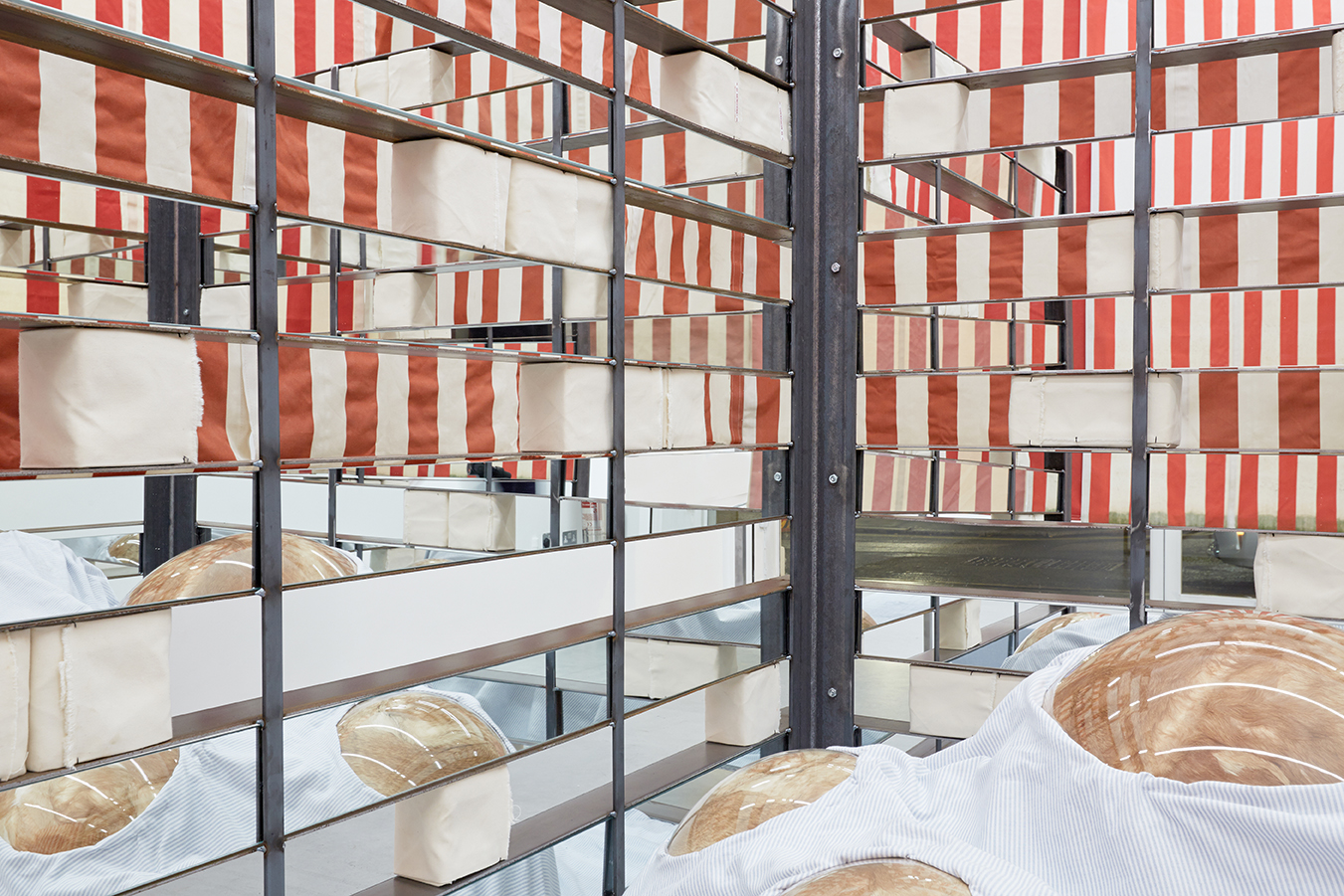 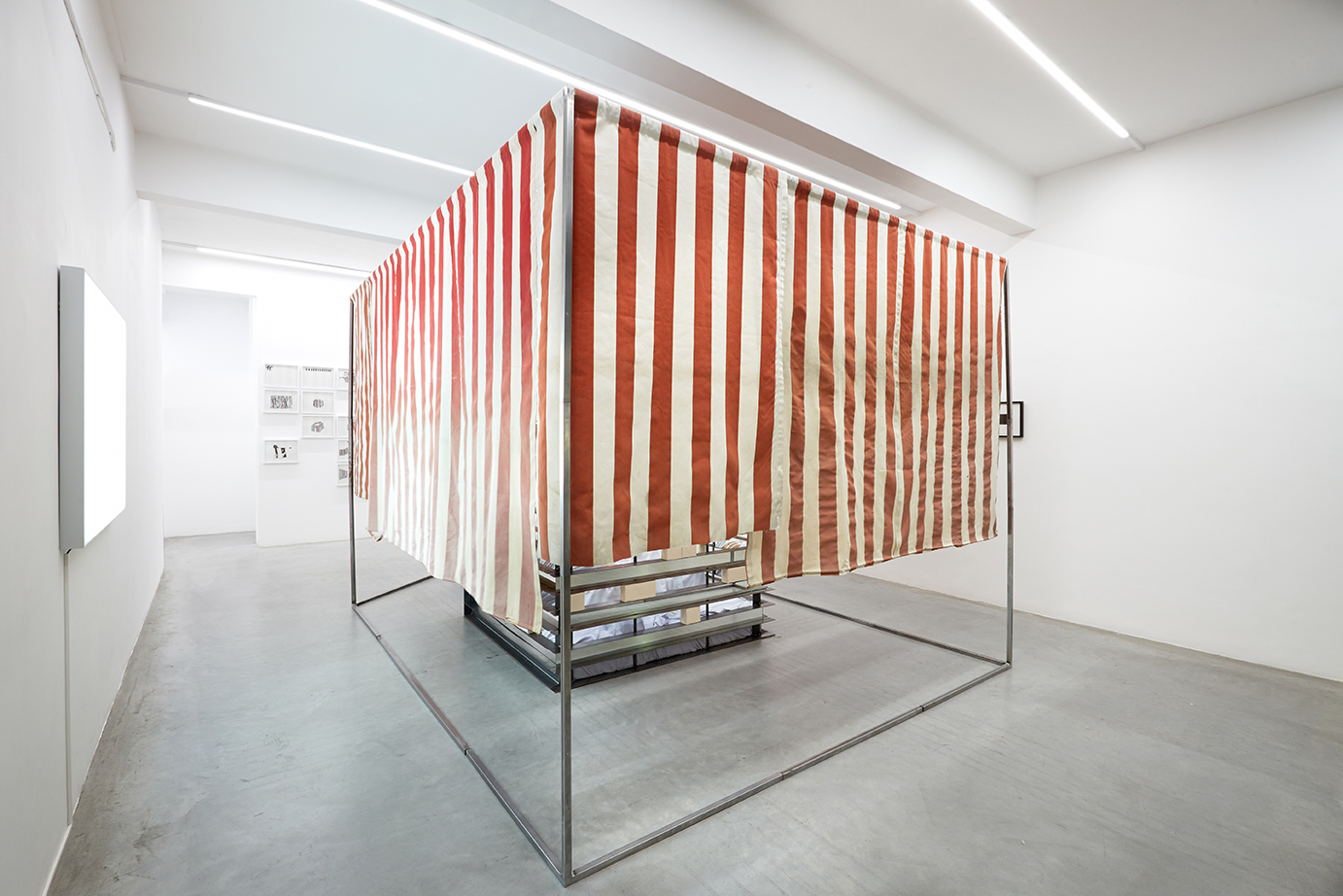 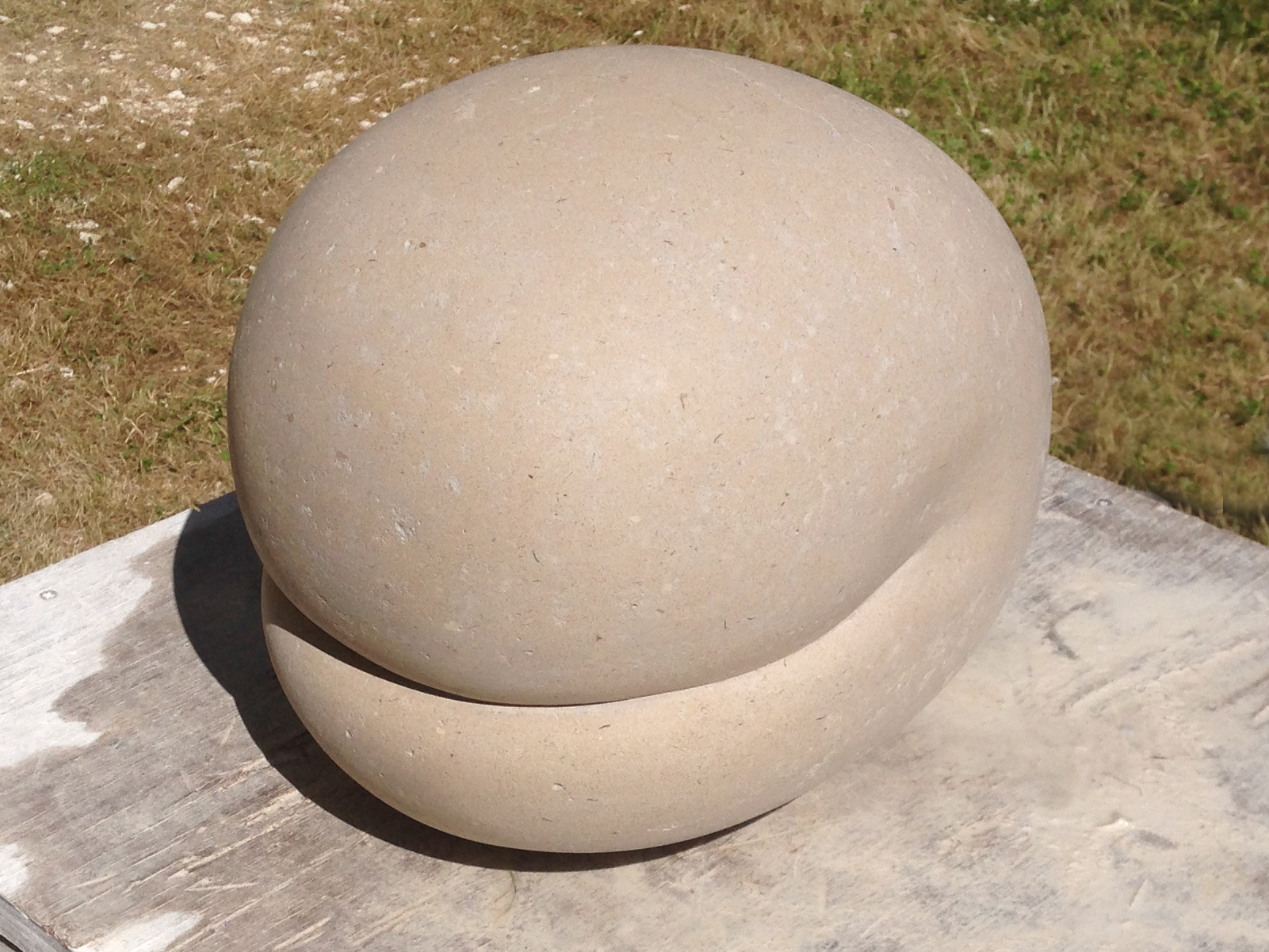 In The Flesh I, Portland Stone By Adeline de Monseignat 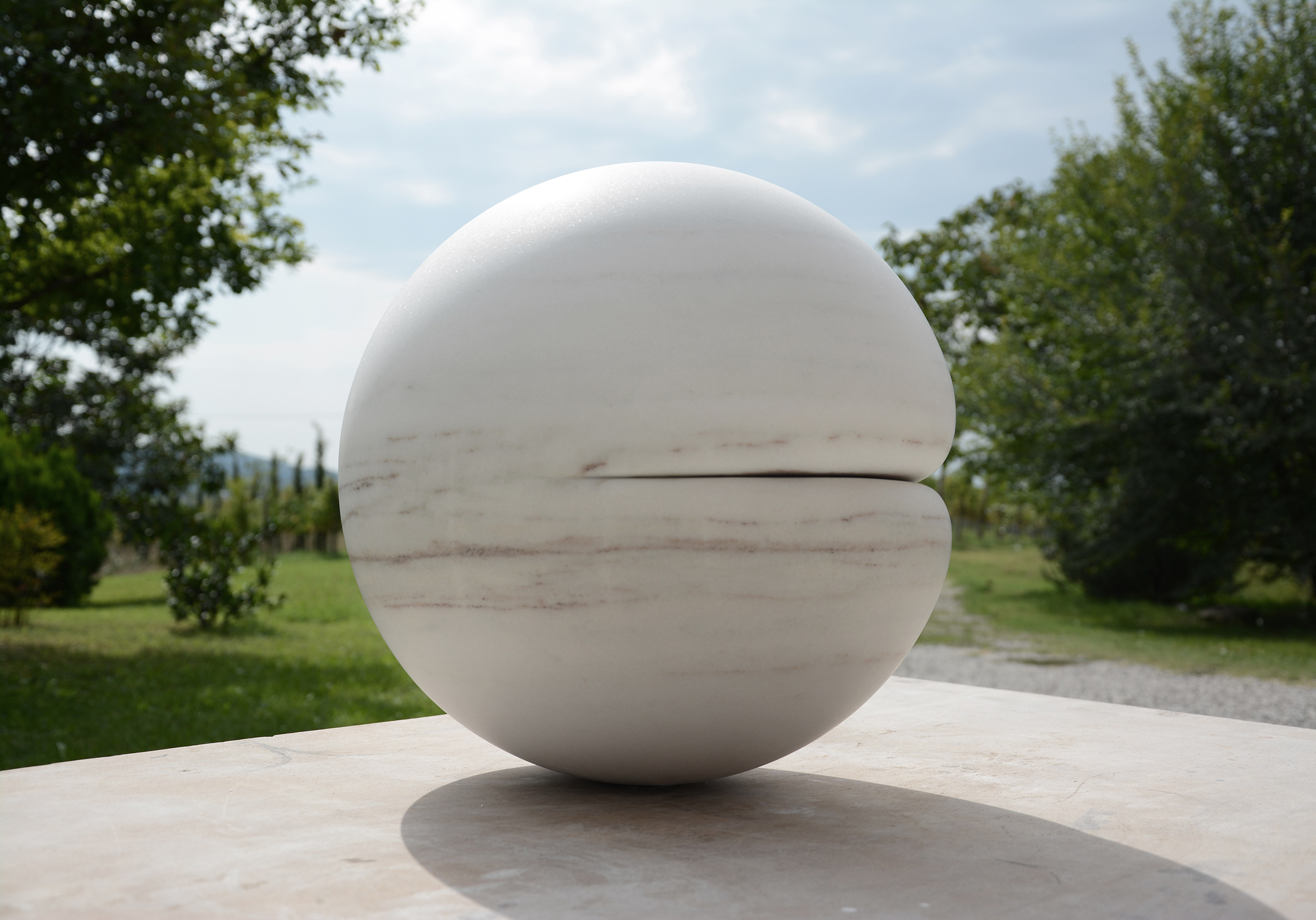 In The Flesh II, Marble By Adeline de Monseignat

In The Flesh, Film Still By Adeline de Monseignat 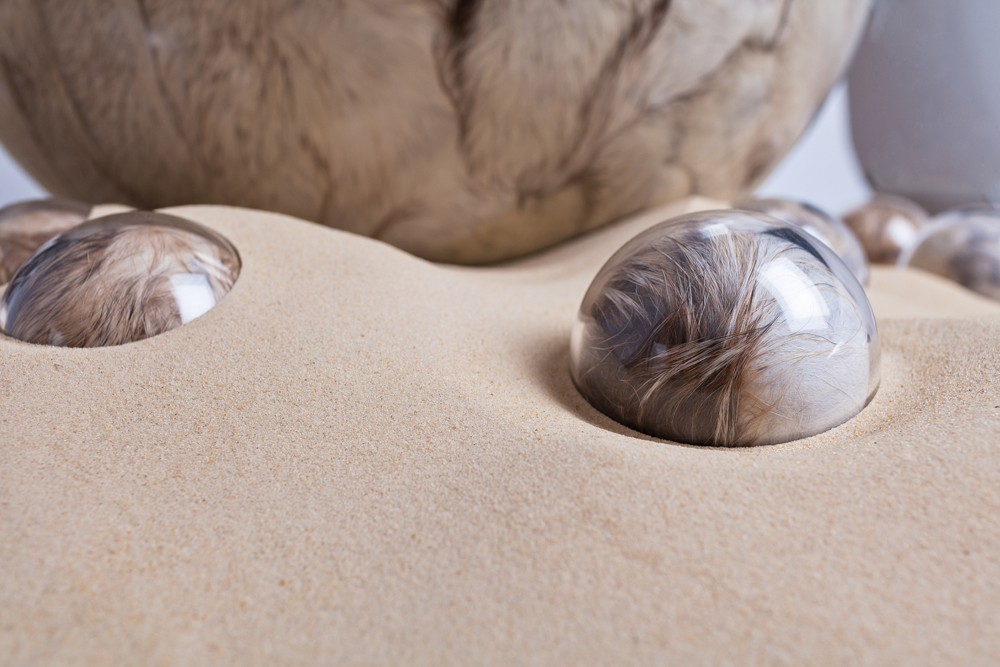 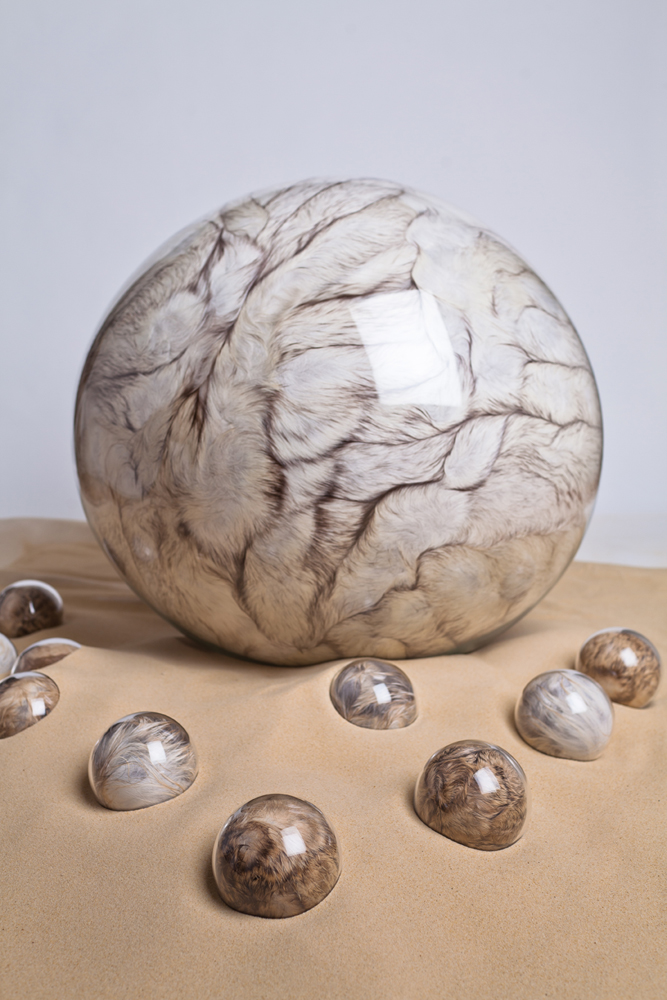 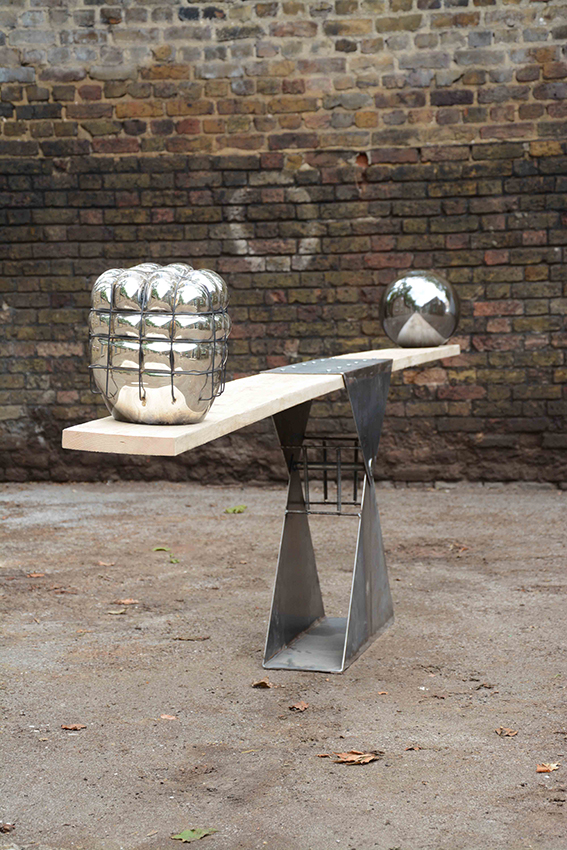 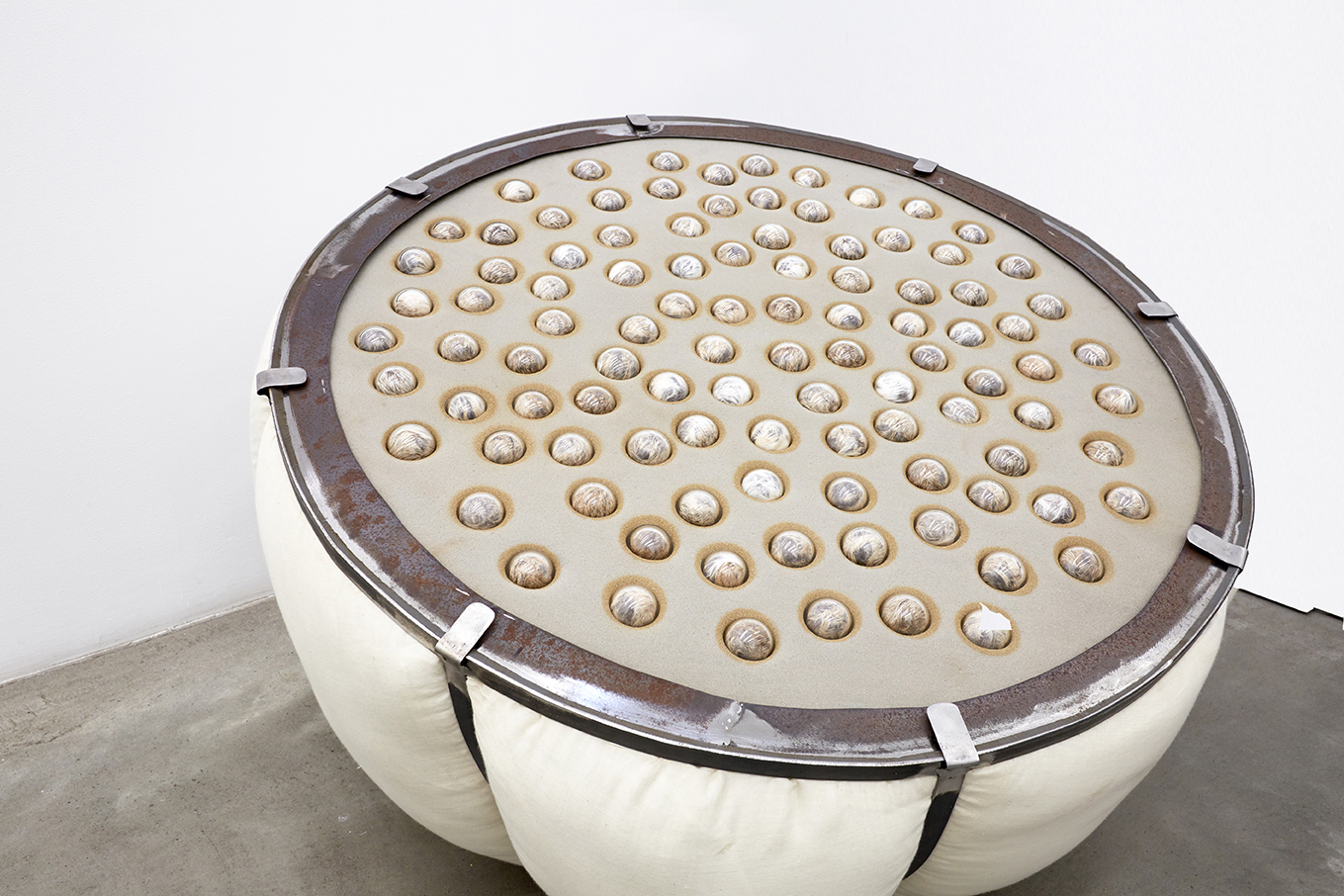 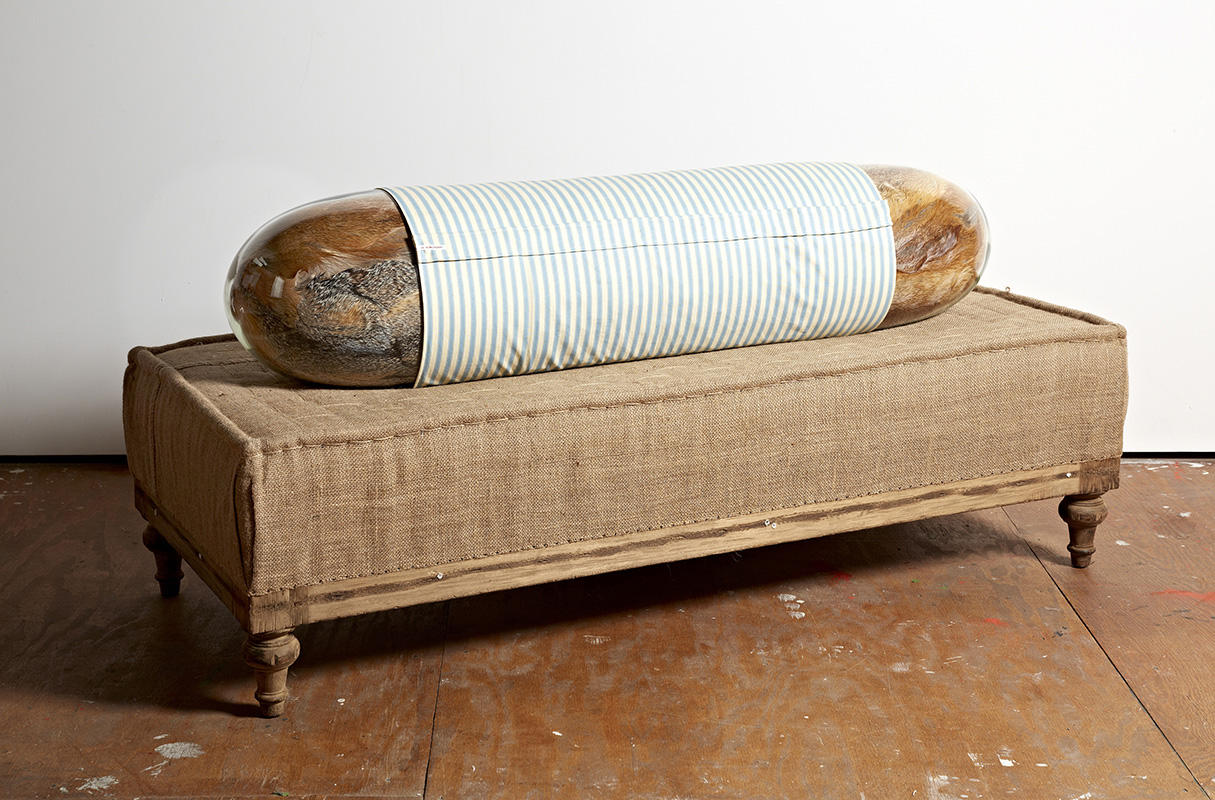 The Eclair By Adeline de Monseignat 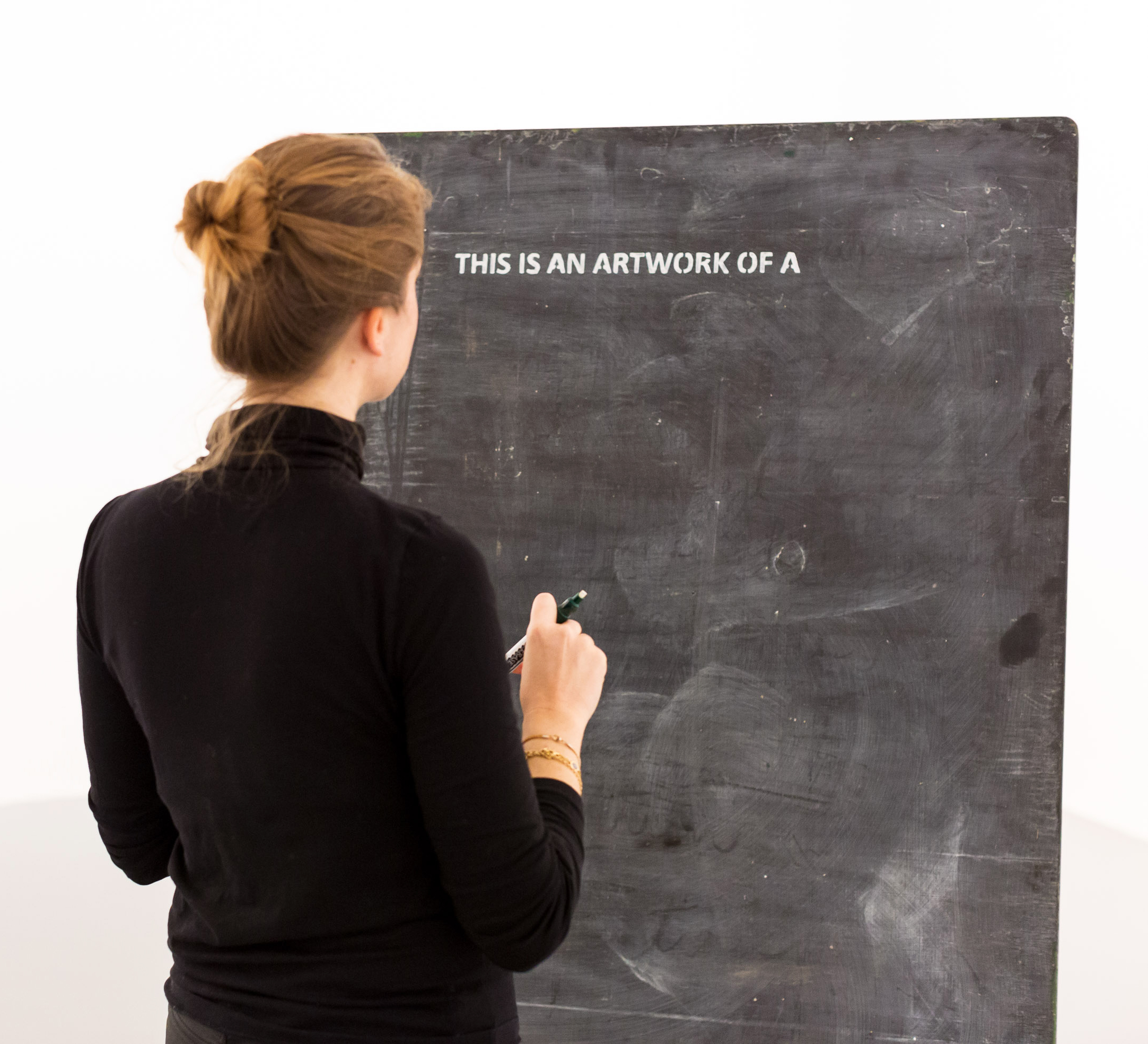 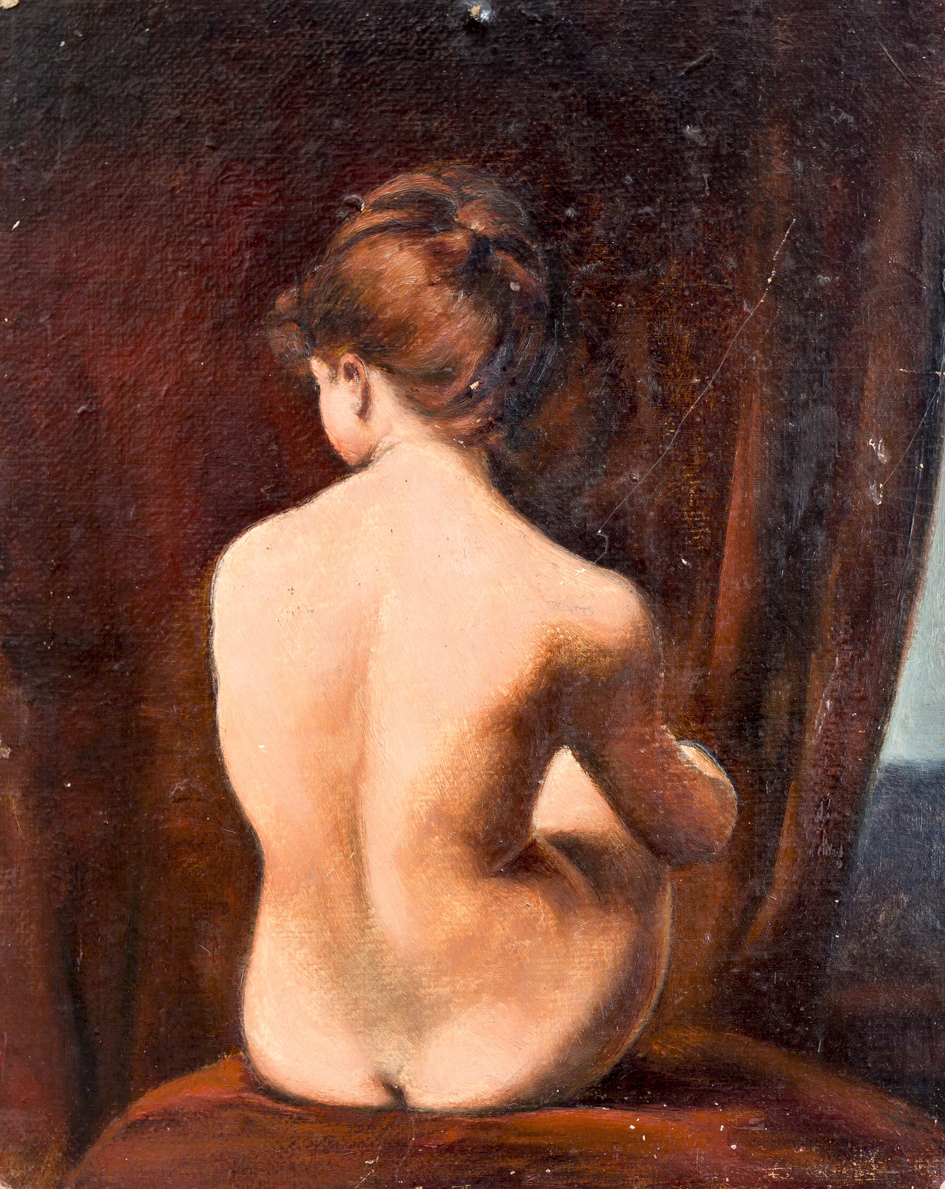 Adeline de Monseignat, is a multidisciplinary visual artist who works with a variety of mediums, exploring themes through different disciplines.

Sculpting and installation-making have been Monseignat’s main means of expression over the past six years, while slowly delving into curating, performance and filmmaking, “I’m mostly interested in highlighting the life within seemingly inanimate matter.  The core of my research reveals an obsession for unravelling the origins of things (words and their etymology, materials and their source of provenance or even child-to-mother relationships) and tend to choose materials for the potential of their tactility.”

What brought you to London?

I have been in London for the past 12 years. I first moved here when I was 17. I chose London for all it has to offer in all creative fields. I started painting and exhibiting my work very quickly.  As I had a year to spare before starting my BA at UCL, I made the most out of it and took short courses in acting, sculpting, painting, design and film production, in many of the colleges under the umbrella of the University of the Arts. I threw myself deep into what the city had to offer and would roam around every museum and gallery I stumbled upon, and still do. It’s hard to get bored in London, if anything the only reason why you’d ever need a break from London would simply be because the overload of exciting events can sometimes get overwhelming, which certainly isn’t a bad sign.

What was your dream career as a child, and does it relate in any way to what you do now?

My dream was to be an astronaut but the reality, I think, was that I was already an artist, and probably an even better, freer one back then. My interest in Space was just the proof that I was then, and still am, intrigued by that which is infinitely bigger than me, that which helps me put things into perspective. I find that oddly reassuring.

Doing my foundation (2010) at the Slade and later my MA at City and Guilds (2011) helped greatly with developing a sense of what it was I wanted to say as an artist, where my interests lied.  Curator Justin Hammond spotted my work at my degree show and it was a bit of a snowball effect after that. He included me in his Catlin Guide, thereafter selected me for the Catlin Art Prize at Londonewcastle Project Space which I was then awarded the Visitor Vote Prize for my installation ‘Mother HEB/Loleta’ (2012). This gave my work great exposure. The following year I was awarded the Bursary Award at the Royal British Society of Sculptors (2013), which was a great honour and enabled me to meet lots of like-minded sculptors in London.

I have been showing work regularly since, both in the UK (Victoria Miro, Yorkshire Sculpture Park and Saatchi) and outside the UK (Bleecker Street Arts Club and Leila Heller in New York). I have since also started building a relationship with Ronchini Gallery who have now been representing me for the last three years. I was first introduced to them by curator James Putnam who curated my first show there – The Uncanny – alongside Berndnaut Smilde (2013). I have since done two more shows at Ronchini: my solo show Home (2014) and my curatorial project Whispers (2015).

I am currently working on my first short artist film called In The Flesh, which relates to my recent stone and marble sculptures of the same name. Given my obsession with unravelling origins, especially of my chosen materials, I wanted to get to understand all about marble quarries and their history. At the V&A’s National Art Library, I stumbled upon texts by Professor Alison Leitch that reveal the intimate relationship between quarry workers and the mountain. They see ‘her’ as alive. Working in a quarry is highly dangerous. Deaths still occur nowadays. They do realise that by extracting blocks after blocks day after day, like depriving her of pieces of her own flesh, they ask a lot from her and therefore sometimes, they say, the mountain claims lives back.

The texts further reveal how they’ve witnessed ‘hearing the mountain weeping at night’, amongst other beautifully visceral and anthropomorphic descriptions of ‘her’. The film is thus a tribute to the mountain, which sacrifices herself to give us sculptors a great and noble material to work with. With a more surrealist twist, it also features a performance of a sculpture – myself – going back to her mother, the mountain, and reconnecting with her roots. After all, if the mountain has a soul, so do every piece of marble extracted from her (‘her children’). We shot the film the second week of July and are currently working on post-production.

Link us to something that you have created…

‘Home‘ as a term is at the very root of ‘the uncanny’ whose etymology takes us to the word ‘unhomely’. My solo show at Ronchini, which featured a main installation – based on the measurements of my childhood bedroom, the most intimate space one could share, yet the one where creativity originates – was an invitation for an immersive experience for the viewer to wander around and have a quiet moment within the work. I chose this link also because it contains a video of the process of making the installation and the installation itself with a voice-over poem, which was shot by Marcus Autelli, the DP who also just shot In The Flesh, the film I’m currently working on. So there’s a nice relationship between this project and the one I’m now focusing on.

Having met James Putnam, and subsequently Lorenzo Ronchini and his team. Through them I have met and exhibited with great artists, like Rebecca Ward, Berndnaut Smilde and Gianpietro Carlesso, an extraordinary sculptor who even welcomed me in his home and studio to teach me stone carving over a month.

Artists for their boundless courage of exposing themselves in the rawest of ways, and perseverance of believing in their work so unapologetically. From Louise Bourgeois, Brancusi and Marina Abramovic to my peers Jonny Briggs, Samuel Zealey, Tamsin Relly and Madeleine Botet de Lacaze, amongst many wonderful others.

I find working alongside other artists to be incredibly inspiring, and I often find ways to collaborate with them. My projects Whispers and This Whisper are the perfect reflection of that. The former, about visual language, was a painting experiment where 12 artists were invited to play Chinese Whispers by passing on their painting one after the other over 12 months. The latter, about verbal language, was a performance where 12 participants had to make the description of an artwork travel around for 6 hours.  In both cases the original artwork was either the physical painting of a nude lady painted by my great grandfather, or its very description. In both cases, the outcome was rather surprising. You can view them on the links above.

My film, In The Flesh, will have an exciting touring life, starting with the Freud Museum on 13 November, then the Royal British Society of Sculptors, Exeter Phoenix, Fondazione Sandretto Re Rebaudengo, the RA, Villa Lena Foundation, Pino Pascali Museum and Ronchini Gallery amongst others.

Another group show in the pipeline will be one curated by David Worthington on the theme of folds and creases in sculpture at the William Benington Gallery. Date TBC.

I am also expanding my Whispers curatorial project to a second edition, this time involving 12 new artists whose disciplines span from performance, photography to video installation and sculpture. This process has started and so far the result is rather astounding. Watch this space! 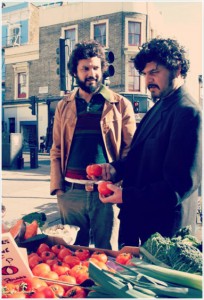 To Party: At mine!

To Shop: Ebay, hands down