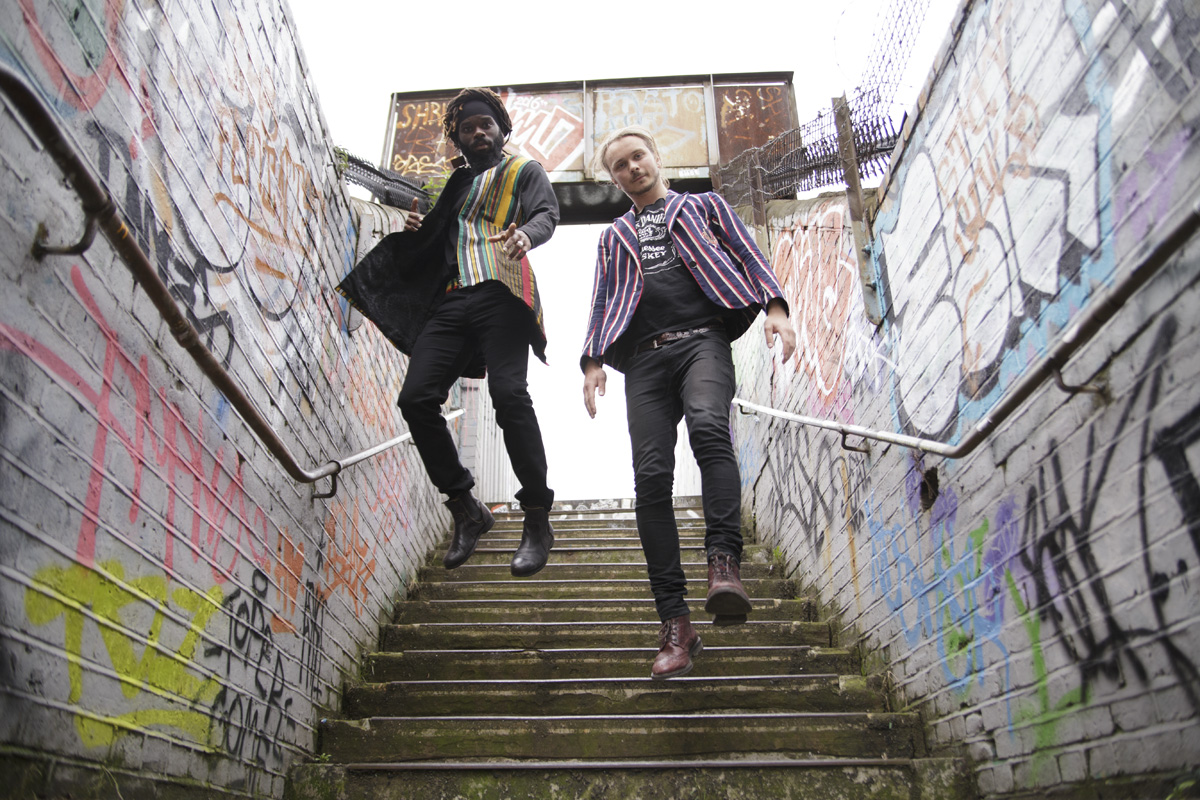 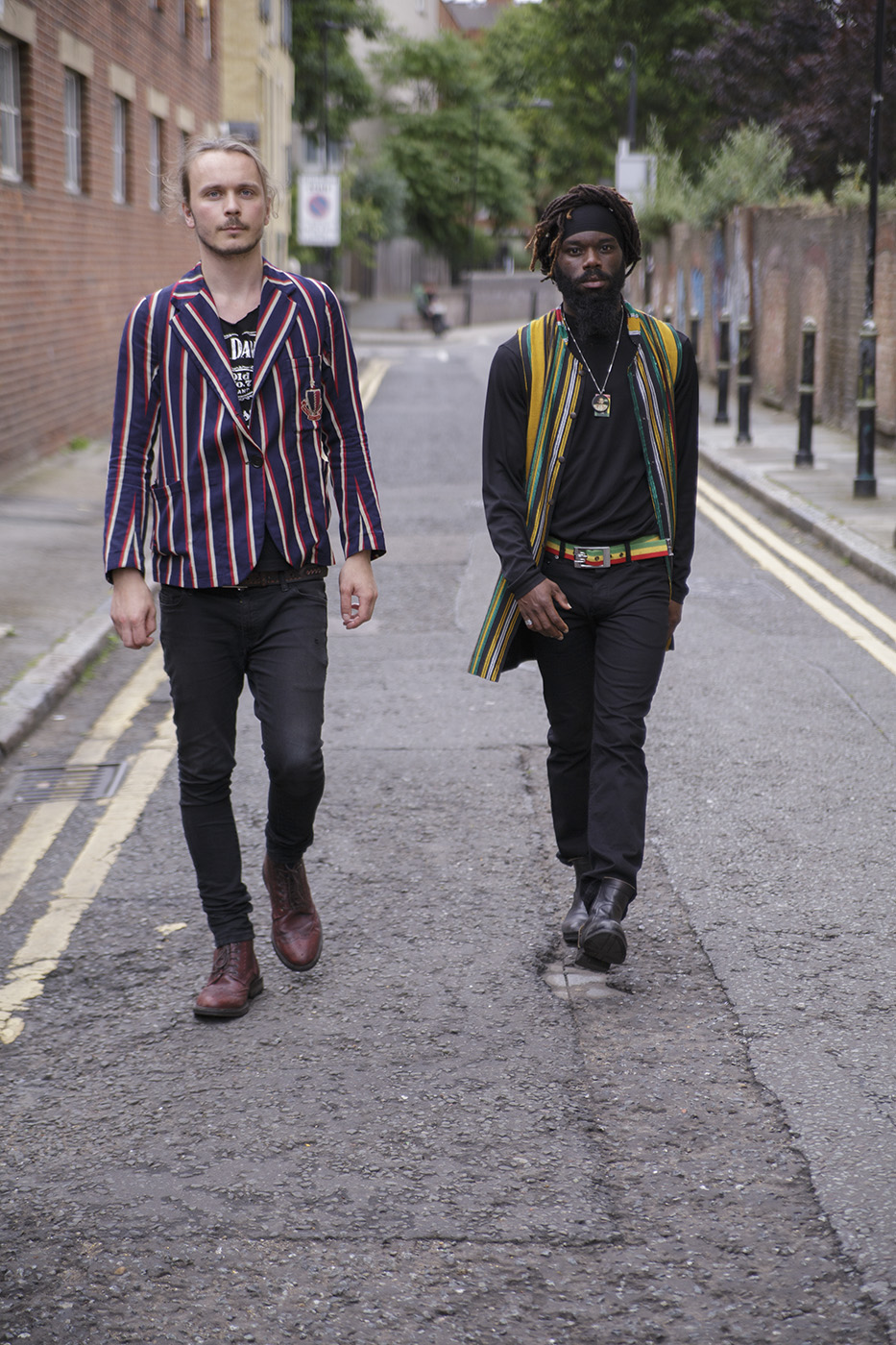 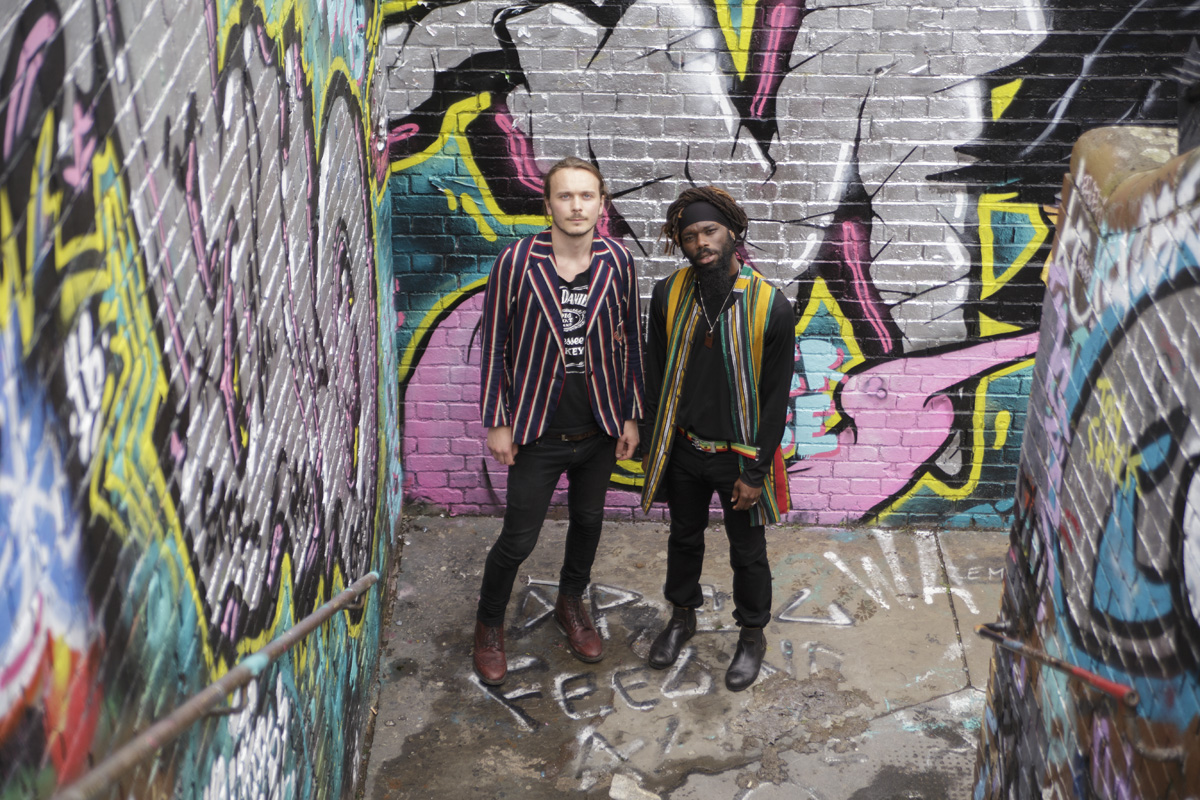 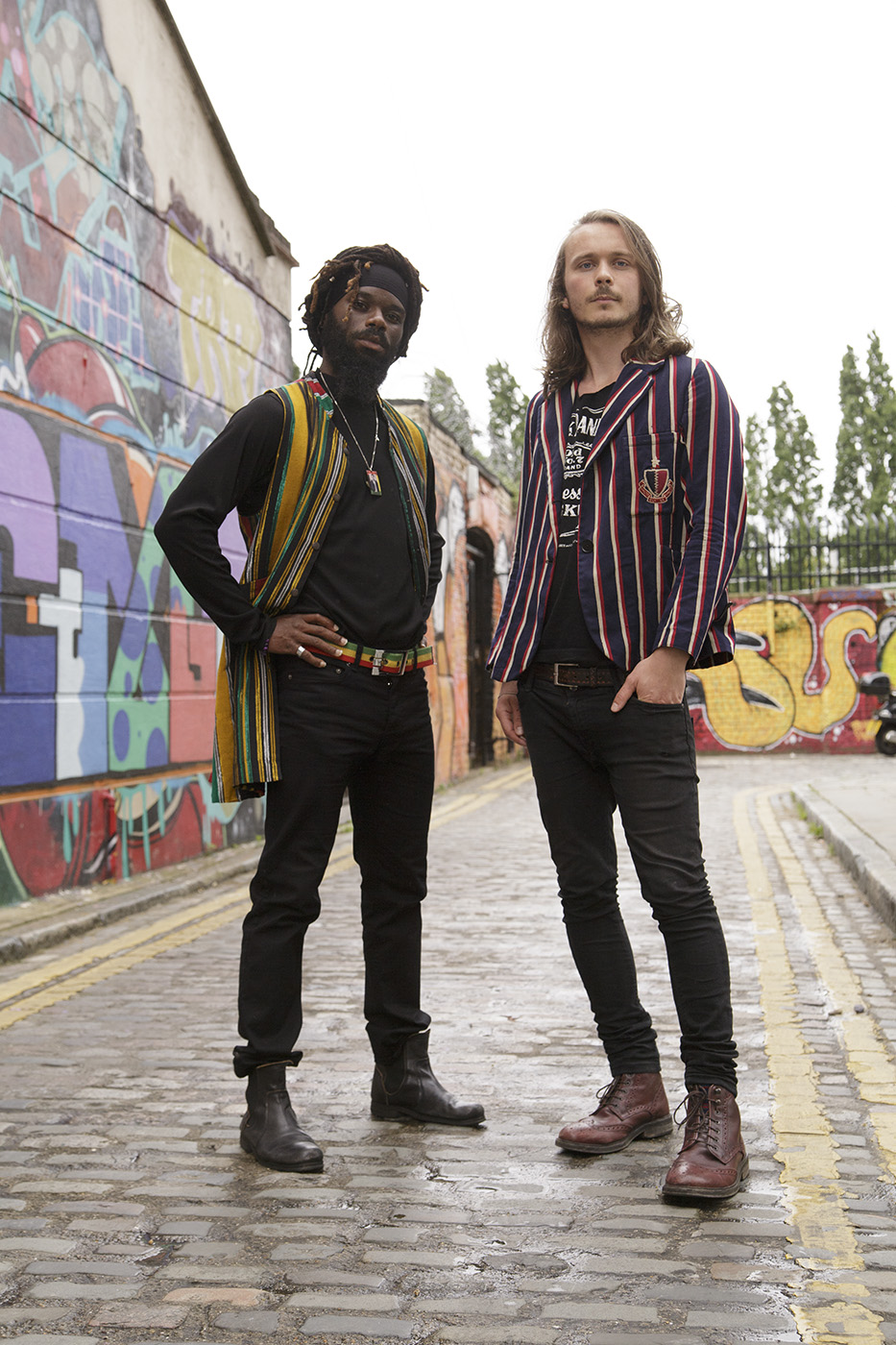 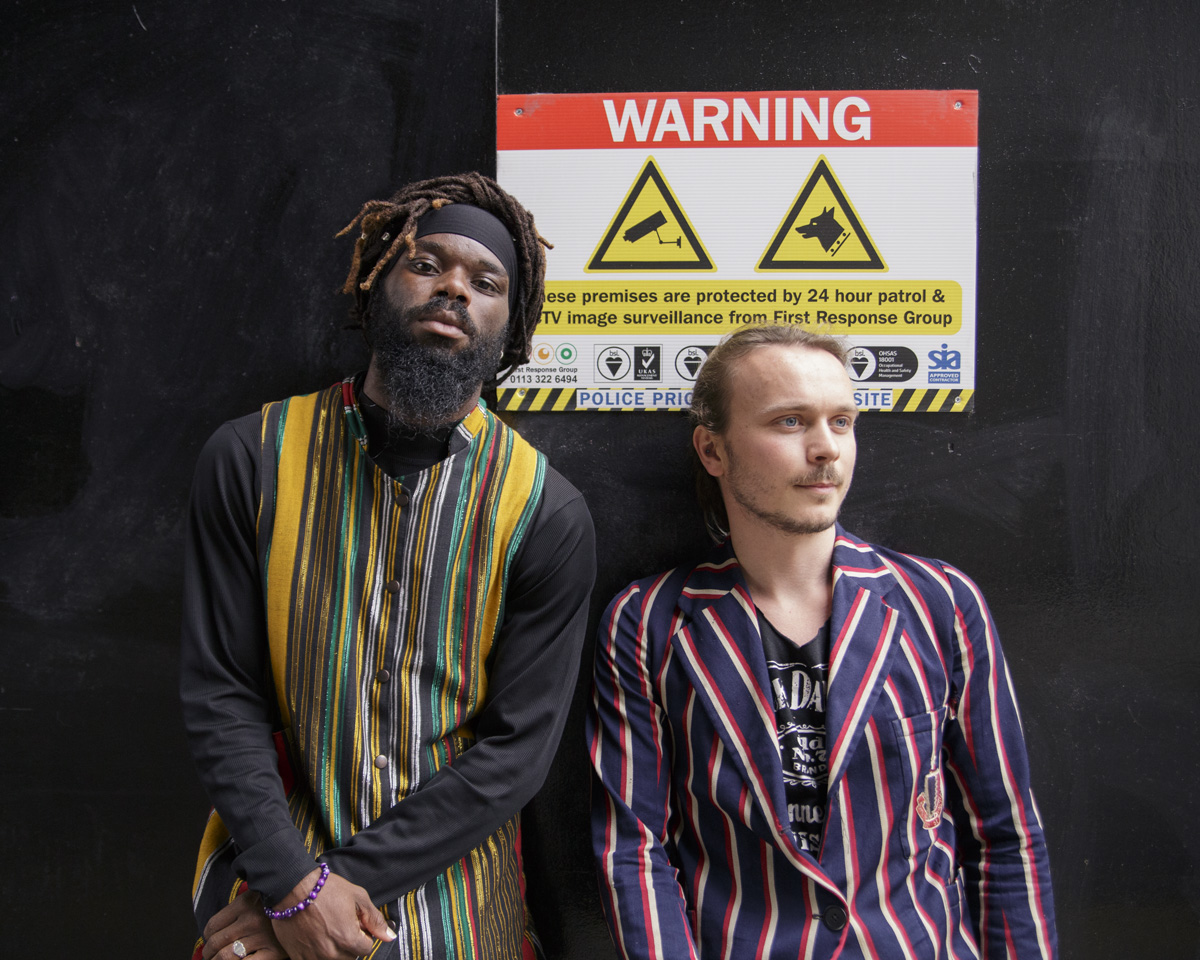 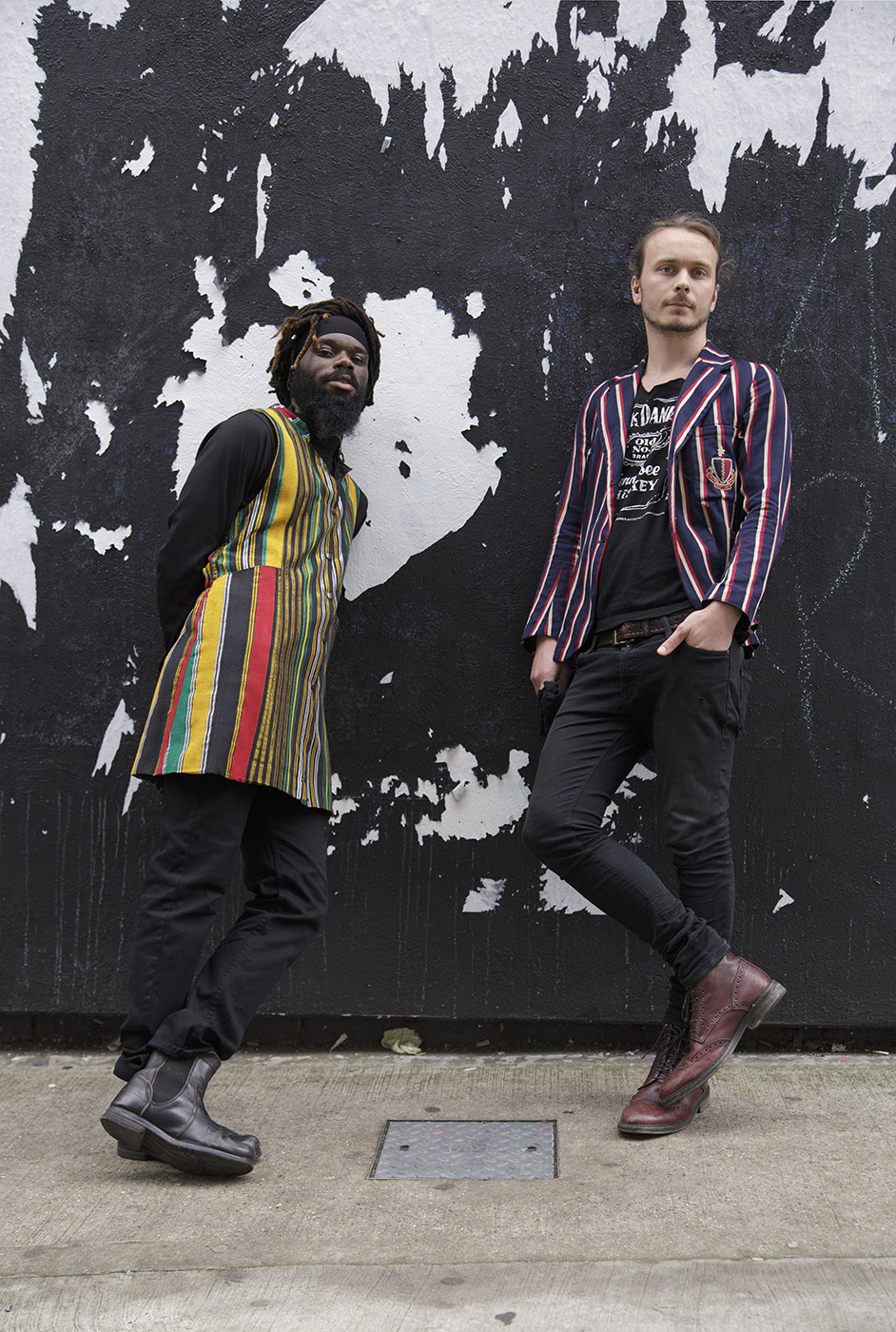 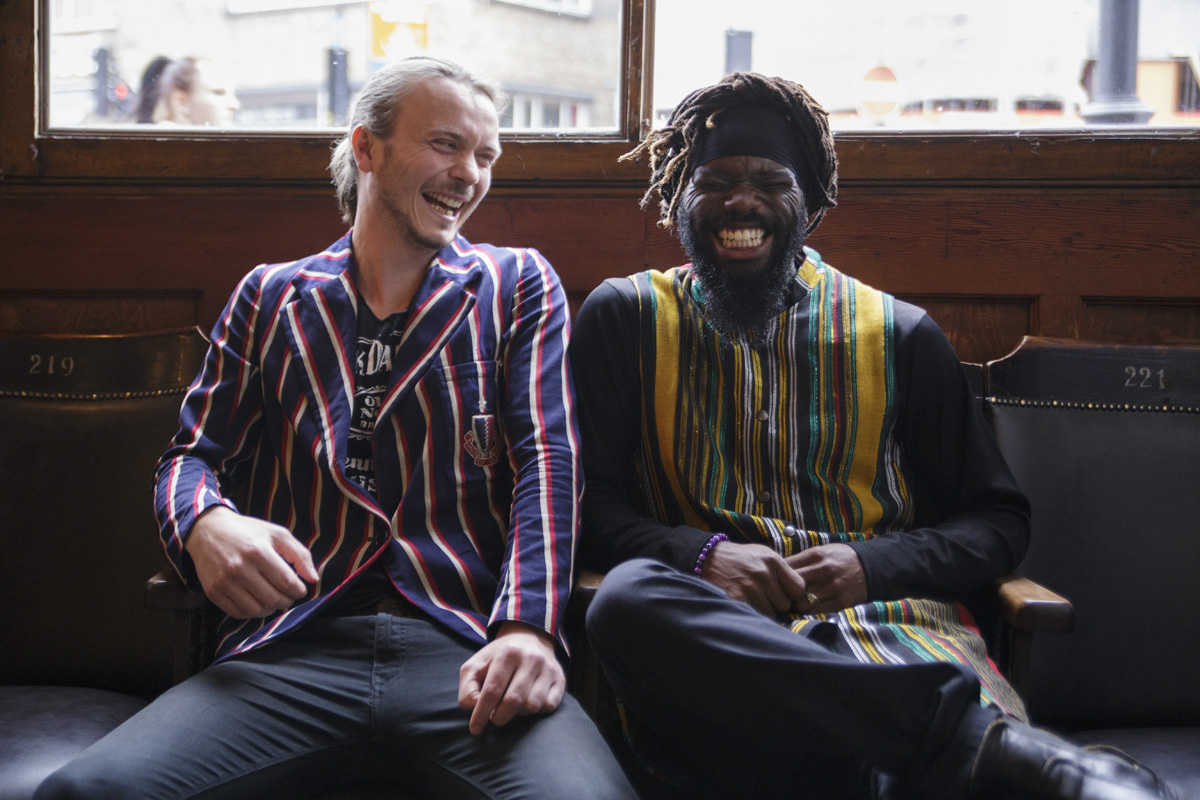 Rob Fincham and Akeba Fridye are The Purple Lights, one of the growing number of guitar and drums duos playing around the country. While Slaves, Royal Blood, and lesser known bands such as The Pearl Harts, Dolls and The Picture Books, play loud, solid rock/blues/punk, The Purple Lights have ventured into other genres. Chris Patmore spoke to Rob and Akeba at The Finsbury Pub in North London after their set at a charity gig for The Stroke Association.

You seem like an unlikely pairing; how did you first get together?

Rob: It was at university. We both went to Buckinghamshire University and ended up living together in a house share for about four years. I was doing music production there.

Akeba: And I did music performance management. Rob was actually doing acoustic, as a solo artist, and I was like, “Rob, do you want some handclaps or shakers on your track?” I saw him in the studio as I was passing by, and he said yeah, and it’s stemmed from that. Our first show was bongos and acoustic guitar, with Rob singing. I was nervous as anything. I had my head down, tapping away at the bongos.

Rob: It started from bongos and acoustic and has developed more and more. We’re still developing now and throwing in new things. I saw a picture from last year and I was still playing the electro-acoustic on stage. So we’ve only moved to a proper electric guitar really recently.

There’s a clear reggae influence to your music. Who were you listening to? Any preferred styles?

Akeba: Our mutual one would be Bob Marley. We like our dub; we like our ska. Anything upbeat. Reggae is quite dancey, it gets you moving, cracking. Who else? Seed [German reggae band]. Lots. It’s all in there.

And you’ve mixed in some blues/metal/psychedelic…

Rob: Definitely. I grew up listening to AC/DC, Black Sabbath, Nirvana, stuff like that, so some of it comes from there as well. But we’re both fans of it anyway. We both like our Pearl Jam.

With those influences you have distilled it down to the very basics of what you need for a band: guitar and drums.

Akeba: There you go. At last someone has said it.

And you have to have live drums.

Akeba: That’s correct. You’re absolutely right. Live drumming is alive. It’s more of a feeling. You can get sound pads, but they just don’t feel for me personally, as a drummer.

Rob: We do interlink things like that, but only as little splashes to add a little variation to things. There’s a humanistic feel to drums, but when it’s strictly to a metronome it sounds very robotic.

I was recently at a First Peoples festival in Montreal, and listening to the powwow it occurred to me that drums and voice are our most primal methods of communication. What are trying to communicate through your music: love, peace?

Akeba: Everything, really. It’s just our way of getting a message out there. We like to talk about all sorts of things going on out there and around you that has an impact on your life. A chicken could get run over in the street and we’d be like, [singing] “no more chicken”. When you can appropriate it to something people can relate to, they’re more interested in it. You do find that a lot.

Do you have a particular stage style or look?

Akeba: Whatever we feel comfortable in. It’s just comfort. We feel at home on stage.

Rob: I like skinny jeans and skinny jeans, boots. I wear colourful things as well, tie-dye, things like that, very psychedelic colours. In grungy venues I like to keep it black, but with a psychedelic jacket.

How’s the summer been, festival wise?

Akeba: 2016 has been our best summer yet. We played about four major festivals, which is a record for us, and we’ve only been together for just over three years, and it’s just escalated and escalated.

Rob: We’ve also had loads of smaller festivals too, so we’ve been really busy.

Akeba: We’ve had at least one gig a week since May.

Rob: We’ve had three this weekend.

Do you think the UK is getting a bit over-saturated with festivals? Not for the musicians, but for the punters.

Akeba: I see what you mean. I think a lot of people like to put on festivals because it’s a great way for people to come together and enjoy themselves. The current economic and political climate is affecting people, but, ultimately, they just want to enjoy themselves.

Rob: If the organisers can do it and make the money to continue doing it, because there is a lot involved, and it takes a long time to make money from a festival, but if people can do it, then why not? I love music festivals, and playing them. They’re our favourite gigs we do. The vibe at festivals is so different because people are open and ready for the music. Anything could happen.

Akeba: It’s more of a struggle getting people to the gigs, but there is something going on every day in London, so you have to have some sort of status to get yourself with the people all the time. We’re playing where we can, and meeting people. It’s like networking for us.

Rob: It’s happening slowly but surely. We’re working hard and it’s going to take a little bit longer. Hopefully with a bit more production, and releasing a bit more music, people are going to come out and get excited when they come to see us. We’ve worked hard on our live show and put a lot of energy into it, so we think we have got something attractive for audiences.

There’s definitely a fun vibe when you play.

Akeba: You’re the second person to say that tonight. We do try to bring that across. It’s fun for us on stage, so we need to portray that and let people know they should get involved in the fun stuff.

Rob: Because there are only two of us, we’ve really got to work it. We have to fire off each other and keep working the stage.

Akeba: We have to compensate for the lack of members in our band, so to speak.

Rob: We’ve got a single coming out soon called ‘Not Alone’. That’s our next project. It’s a slower reggae number that we played tonight. We’re going to push that and hopefully get some radio play.

Akeba: In terms of releases, we’re just going into the studio and seeing what works commercially, and if not we’re still going to put them out there for the shear fact that they’re our songs so that people can have a feel of what we are. We do need to find some kind of attention, commercially.

Do you intend to try and stay independent?

Akeba: For now, until we get the right offer we’ll stay on the track and keep going.

Rob: We’re not ignorant of the fact that if we want to take it to another level we’ll have to have some help from a third party. Unless we want to keep kicking around on the level we are, eventually you are going to have to accept help and work with other companies to develop your sound further. We’ve got studio sessions in a couple of weeks, and a single ready for release now. Things are always rolling with us. We’re always recording, always moving forward to the next and better things.