From the beginning, we just tried to be us and see what happened, our sound was never forced, it was already there.

Swedish Electronica band, Highly Sedated, are capturing the dance scene with their fresh and artful take on minimalist dance music — part of the new generation of electronic acts like Emancipator who are bridging the gap between EDM and the classic rock band.

The instrumentals that Highly Sedated use are eclectic and show a work informed by soft tremolo strings and strong brass and percussion reminiscent of classic progressive EDM artists like Cosmic Gate and N’to. Their live shows are made even better for it, with the band recently performing with the Lithuanian Chamber Orchestra, combining hard electronic beats with classical arrangements. When stripped back in their acoustic performances the band thrives, showcasing their organic sound through chopping guitar rhythms and the soulful vocals of members Patrick Ray and Verner Westlund.

In an album that confidently deploys intricate lyrics, some songs have less resonance in what seems to be a bid to ingrain songs in your mind. This is clear with their self-titled single, ‘Highly Sedated’ due to the more obvious choice of refrain ‘Highly Sedated’. This hangs on ghoulishly to a song that is otherwise supported by more meaningful lyrics and catchier moments like, ‘tell me, how are you living?’ emerging from high energy synth, sound effects and percussion.

The context behind the song though makes it much more impactful and even more so when thinking of music as a beautiful pathogen feeding itself into your conscience. When asking band member Patrick about his influences he builds this narrative, “ever since I was a little kid, music has been like drugs to me. I’ve always been on the lookout for my next fix, my next big music discovery.”

The remix of ‘Highly Sedated’ by Corey James & Anckarstrom lifts the single into a new life by breaking up and softening the melancholic vocals with an intricate euphoric take-off. Since the summer release of their debut album, All We Have Is Now, via Steve Angello’s SIZE Records they’ve been working hard to secure big hitting collaborations. Allowing such vivid interpretations of excellent original core material makes it obvious just how much Highly Sedated have to offer as a band, providing vignettes of different electronic styles that make a unique group. “We’re unafraid to explore new musical realms,” says Patrick.

New single ‘Burn’ showcases their finely-tuned production abilities, incorporating underground tones with a  futuristic, almost steam-punk vibe brought in by intense synth patterns and the anthemic beat of progressive house. The lyrics ‘set fire to the world tonight’ blared through some speakers could easily blend with grime and garage tunes like Boy Better Know’s ‘Too Many Man’. Perhaps this is linked to the wider influence of hip-hop music on the band, with Patrick explaining his love of grimey 90’s rap:

“I come from a musical household and it’s been a big part of my life since I was born. I got blues (like Robert Johnsson and Muddy Waters) from my American dad, Swedish musical legends (like Cornelis Vreeswijk) from my Swedish mom and Speed Metal & Hip Hop from my older brother. I got more and more into Hip Hop and eventually started writing, producing and rapping myself.

“I think I was about 16 when me and some friends started our first hip hop group. Fast forward 7-8 years and we had toured the country and dropped some nice projects. This is around the same time I really started getting into instrumental electronic music, and I found it to be a nice contrast to a lot of testosterone-fuelled Hip Hop.”

Despite this, there is certainly a lot of testosterone-fuelled Hip-Hop pumped into the overall sound of the band and something that could be refined to achieve more evocative vocal sequences. The wide-ranging music backgrounds of each band-member are what makes what Highly Sedated are doing particularly exciting. Blending songs together in an album that moves from ones with more grimey roots to the more minimalist beats of ‘Make Love’.

The lyrics of this song sensually announce, ‘I call her my beautiful train wreck’, combined with a walking bass-line and delicate orchestral accompaniment. Band member, Hannes Söderlund, cites songs like ‘Time’ by N’to and ‘Says’ by Nils Frahm as direct influences upon their album and this subtly threads through the whole work. Leonas Somovas supports this:

“When I started to dive deeper into electronic music, especially minimalist electronica, I was hugely inspired by Philip Glass. I found his music when I saw Qatsi trilogy scored by Philip Glass. When I close my eyes and listen to his music, I can travel to different places. Also trying to work by the formula that less is more, I think instead of adding a lot of things, it’s sometimes better to remove stuff.”

Following this up by sharing his love of The Eraser by Thom Yorke, the less is more approach that informs the work of Highly Sedated is hard not to appreciate. This makes for a vastness that can be heard in one of the most dazzling songs on the record, ‘Smoke Rings’ which incorporates falsetto singing with ambient yet dirty synths. Verner comments on this style:

“One song that inspired me in the making of our record was ‘A New Error’ by Moderat. That eerie vibe and dark landscape really got to me. I also listened a lot to Epikur by David August. It’s almost like a classical piece and it has a vastness to it that I like to get lost in. Another song that really got me was, ‘Like It Or Not’ by Bob Moses. Beautiful chord changes and great vocals. And a kind of minimalistic beat as well.”

This is all pinned in by an attention to detail and rhythm, with drum machines that keep a beautiful smoothness to the overall sound. Perhaps a nod to the ways their songs have a solid rock structure, Hannes mentions how he thinks ‘Patience’ by Guns N Roses is a masterpiece and huge influence. He even discusses the way that Guns N Roses impact the creativity and artwork of his band:

“Slash for example is an amazing designer and did a lot of their own flyers/sketches in the beginning. Something that I respect a lot and made me realise that we are going to do everything by ourselves. That we are like a little creative hub…”

This is something that becomes increasingly apparent when considering the creative backgrounds that are a recurring theme for each member of the band. Sebastian Dollinger shares with us that his father used to work for Radio Luxembourg:

“Growing up my father used to iron his shirts in the basement listening to music they never played on the radio. Stuff he played at work. I loved to go down to that room and finding him blasting Curtis Mayfield and he was probably one of my first favourite artists.”

Like wide-eyed children wandering into rooms full of music, Highly Sedated explore different soundscapes with an enthusiasm that exudes from their work. This bubble of creativity has fostered an esoteric sound packed with an experimental usage of instrumentation and sensitivity of lyric writing that accumulates in a debut album that is surprising and promising. The live shows that Highly Sedated have coming up along with their prodigious creation of new material make this a very exciting time for the band- one to watch indeed.

Highly Sedated’s All We Have Is Now is out now via SIZE Records. 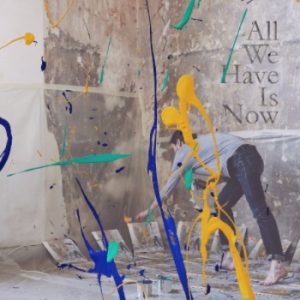