One of Nottingham’s finest musical exports, Six By Seven, are signing off their sterling career with a Greatest Hits record, a double vinyl reissue of their classic 2000 album, The Closer You Get, and two shows reuniting the original line up.

Formed in 1996 and made up of Chris Olley (vocals/guitar), James Flower (keyboard), Sam Hempton (guitar), Paul Douglas (bass) and Chris Davis (drums), Six By Seven created swirling, atmospheric music that both impressed and confused critics, who didn’t quite know how to place the record. The fusion of Brit-Pop, grunge, post-hardcore and shoegaze, whilst simultaneously rejecting all of those influences, created an enchanting musical mix. In particular, Olley’s distinctive vocal and the slow burning guitars of Hempton cut above the dense wall of sound that swirled menacingly below them.

Their politically charged and socially conscious lyrics covered a broad range of topics, including junk food culture, unexploded mines, fake success and the depressing state of society that they saw before them. The Closer You Get delivered moments such as the quietly distorted melancholy of ‘England And A Broken Radio’, the frustrated pleas of ‘New Year’ and the punk aesthetic of ‘Sawn Off Metallica Shirt’. These moments are also revisited in the recordings of one of their many John Peel sessions, released as part of the reissued record. ‘England And A Broken Radio’ is transformed into a seven and a half minute storm of distortion and feedback whilst a stripped back version of ‘Another Love Song’ captures its tender simplicity beautifully, as the band did away with the pulsating electronics of the recorded version.

Following their sophomore release, they toured in support of Ash, Manic Street Preachers, The Dandy Warhols and Placebo yet remained somewhat isolated from the rest of the industry. After the power of The Closer You Get, the bands greatest commercial success came with their third album, The Way I Feel, and led to headline tours before the band finally split in 2008. The best moments of that album are captured in the Greatest Hits package, including ‘I O U Love’, with its panpipes riff and some of the bands most affecting songwriting, alongside tracks such as ‘Candlelight’ from their debut which gives the best example of their Brit-Pop roots before it descends into signature angular guitar work.

After various side projects, Six By Seven reformed in 2012 with Olley and Flowers surviving from the original line up. The campaign in 2015 for ‘Eat Junk Become Junk’ to be Christmas Number 1 was a surprise success. It reignited interest in the band and sparked the idea to reintroduce Six By Seven to those who missed them the first time round, alongside a generation of new fans.

Six By Seven rerelease The Closer You Get on double vinyl, without any remastering or tampering. It will be complemented by tracks from their third Peel session and various B-sides as well as their Greatest Hits CD, which draws on all seven of their studio albums. All of these records will be released via Beggars Arkive on February 17th.

Their upcoming live dates include a homecoming in Nottingham that will consist of two sets, starting with 10 tracks from their back catalogue, followed by the performance of The Closer You Get in its full glory. Tickets are available HERE. 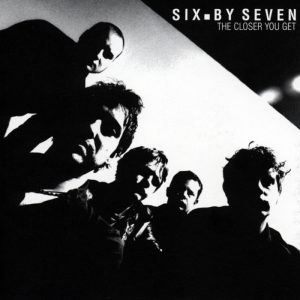