Strange U is the collaborative project of UK heavyweight MC King Kashmere and experimental producer Zygote who, having released a few singles and EPs since first working together in 2013, release their debut album, #LP4080, this month on High Focus Records.

Across the course of 16 tracks the pair mix social commentary with sonic experimentation, sci-fi imagery and endless character. The pair have an ear for the different and original, which is clear from the opening bars of ‘Terminator Funk’; spoken word samples and an 8-bit beat creating a captivating, if disorientating, introduction to a project that will continue to confuse and impress in equal measure. Science fiction and popular culture are recurring inspirations throughout the record, from the dark halo references and laser zap sound effects of ‘Bullet Proof Moustache’ through to the name checks for Van Damme, Burt Reynolds, Total Recall and Freddie Flintoff.

The album is dominated by a retro feel and the lo-fi production of single, ‘Zuul’, is the perfect introduction to the duo’s aesthetic. ‘Zuul’ is in itself a reference to the villain from the original Ghostbusters movie and the video has a crackly VHS feel to it. Zygote creates minimalist soundscapes that are often jarring, but the thick basslines and staccato drums are complemented by a swirling collage of samples, reverb and effects; part 80’s throwback, part futuristic groove. The beats provide the perfect foil to Kashmere who delivers his dense streams of lyrics, packed with storytelling, personal reflections, cultural references and social consciousness.

The record feels like it is grounded in Kashmere and Zygote’s youth, with the ideas of “computers taking you alive” and cyborgs that dominated the eighties recurring themes, but with the music delivered from the perspective of modern activists, who are looking back at the limited progress that has been made since those times of youthful innocence with a sadness and regret. ‘Eden’s Husk’ addresses the environmental damage being done, predicting a catastrophic outcome for a planet exploited, polluted and ultimately neglected, whilst the mention of ozone provides a grim reminder that so little has ultimately changed since the Terminator first emerged on our screens.

‘Hanging Chads’, meanwhile brings this disappointment full circle, as a brief but damning attack on the political elite and the concerning decisions being made both in the UK and overseas, ideas which are explored further on single, ‘Mr Kill’. As a pair they are exploring ideas that many in the hip hop scene steer clear of, showing a boldness and fearlessness that is so often missing from modern music. There is still time for Kashmere to put other wannabe rappers in their place on ‘Shots’ but ultimately this is a record for the pair, a moment of free expression and experimentation. In doing so they manage to prove why music is so important, and the diversity of output is a credit to the cultures that birth and nurture the musicians. #LP4080 doesn’t ride any current trends or reach for any form of mainstream success and this is exactly what makes it so impressive, a record that captures the spirit and ideals of its creators and in the process delivers vital messages of social change in a unique, sci-fi inspired manner.

The release is being supported by a launch night at Birthdays, Dalston on February 11th. Strange U will be accompanied by many of the artists who feature on their record, including Lee Scott and High Focus label head Fliptrix who has a killer verse on album standout ‘Illuminations’, as well as Jazz T and Molotov. Get your tickets HERE.

#LP4080 is released 10 February on High Focus records and can be pre-ordered HERE. 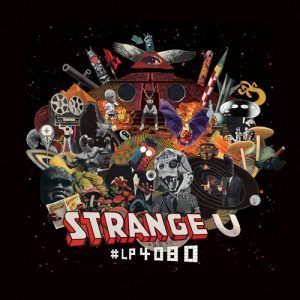