JPNSGRLS: The Thrill of Imminent Divorce

Canadian four-piece, JPNSGIRLS, are set to release their sophomore album Divorce, a thrilling record driven by the trials and tribulations of youth and memorable garage rock riffs.

The tales of isolated youth, love and lust that filled their first album, Circulation, make a welcome return, set apart from the pack by the quality of songwriting from lead singer Charlie Kerr. From the opening track ‘Oh My God’ where Kerr sings, “I was conceived in New York, two strangers planted a seed, and that was four years before their divorce, I think it had an effect on me,” it is clear this album is more personal than anything preceding it.

The social commentary seen on Circulation standouts ‘Brandon’ and ‘Mushrooms’ is even more prominent this time around. Across the 11 tracks, Kerr touches on topics ranging from male misogyny (‘Bully For You’) to the pitfalls of modern dating (‘Holding Back‘) via the unfulfilled ambitions of youth (‘Trojan Horse’), with these themes sitting alongside the alternative takes on love that dominated the first album (‘Gap Year’, ‘2009’). His songwriting captures elements of the witty social insight of Alex Turner, the sing-a-long choruses of the Gallagher’s and the honest emotion of Jesse Lacey and weaves it all together, as Kerr swings from vitriolic roar to crisp falsetto, singing with such passion that the listener cannot help but be pulled into his world.

The songwriting is complemented by the musicianship of the band and their ever expanding sound palette. JPNSGRLS – pronounced Japanese Girls – produce riffs heavy enough for Queens of the Stone Age (‘Bully For You’, ’19 Pound Baby’) and intricate math-rock rhythms reminiscent of the early work of the Foals (‘2009’,’A Girl From a Different Dimension’). The punchy and at times frenetic guitar work of Oliver Mann (now replaced by Colton Lauro) is matched by the power and drive of the rhythm section of Chris McClelland and Graham Serl, as the band produce a varied and engaging soundscape.

Production on the album was handled by Dave Shiffman (Rage Against the Machine, Biffy Clyro) and Steve Bays (Mounties, Hot Heat), with mastering from Greg Calbi (Tame Impala, Modest Mouse), providing a polished sound, whilst managing to retain a real sense of the energy of the band’s raucous live shows. This energy and spirit is also evident in the announcement video for the album, set to album opener ‘Oh My God’, a DIY video with a cops and robbers skit, and the studio teaser for new single  ‘Bully For Me’, that provide insight into the humour and spark of a young band enjoying their music. Whilst JPNSGRLS continue to experiment with their sound and influences, Divorce is a testament to the bands craftsmanship and talent as they create one of the best indie rock albums of the year so far.

Divorce is released on 22 July 2016 via Light Organ Records. 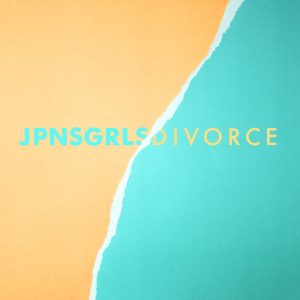