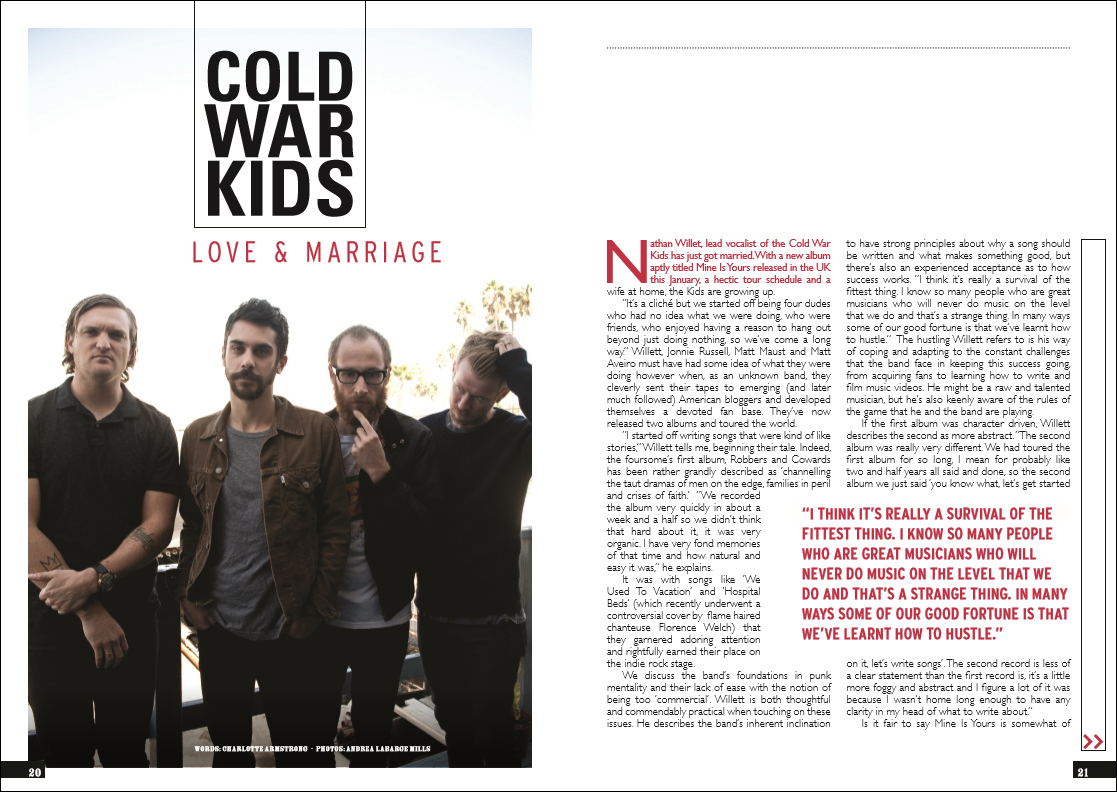 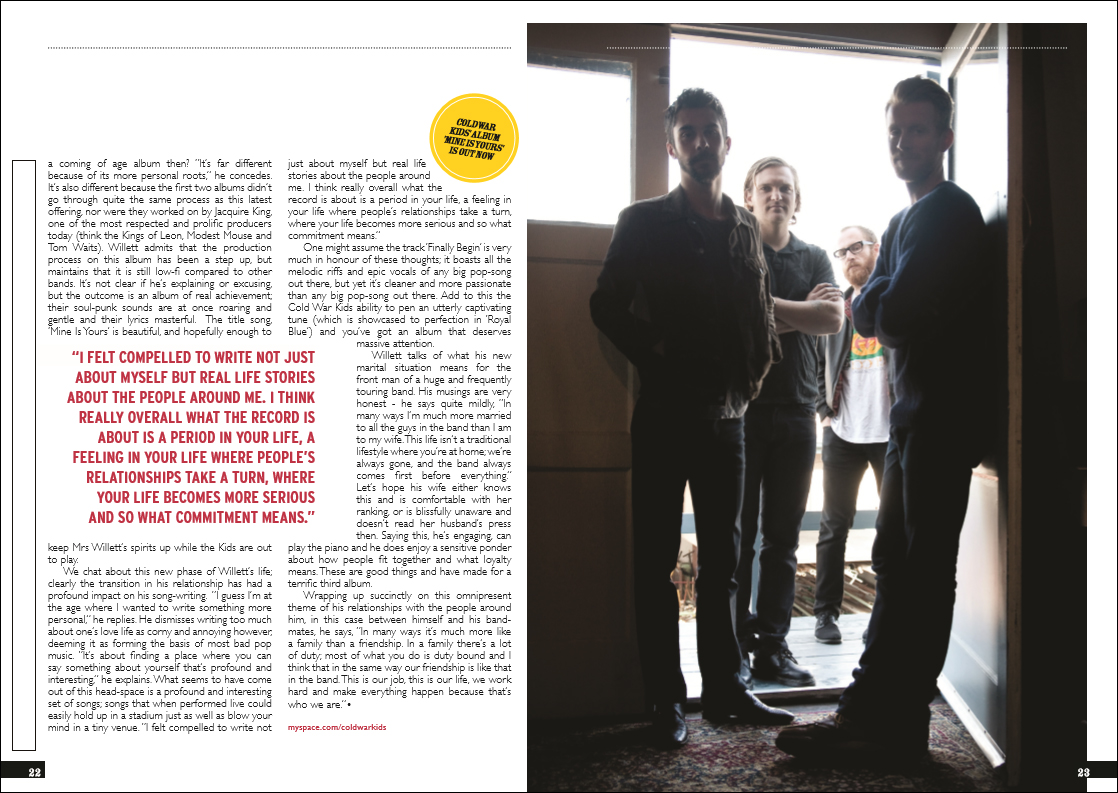 Nathan Willet, lead vocalist of the Cold War Kids has just got married. With a new album aptly titled Mine Is Yours released in the UK this January, a hectic tour schedule and a wife at home, the Kids are growing up.

“It’s a cliché but we started off being four dudes who had no idea what we were doing, who were friends, who enjoyed having a reason to hang out beyond just doing nothing, so we’ve come a long way.” Willett, Jonnie Russell, Matt Maust and Matt Aveiro must have had some idea of what they were doing however when, as an unknown band, they cleverly sent their tapes to emerging (and later much followed) American bloggers and developed themselves a devoted fan base. They’ve now released two albums and toured the world.

“I started off writing songs that were kind of like stories,” Willett tells me, beginning their tale. Indeed, the foursome’s first album, Robbers and Cowards has been rather grandly described as ‘channelling the taut dramas of men on the edge, families in peril and crises of faith.’  “We recorded the album very quickly in about a week and a half so we didn’t think that hard about it, it was very organic. I have very fond memories of that time and how natural and easy it was,” he explains.

It was with songs like ‘We Used To Vacation’ and ‘Hospital Beds’ (which recently underwent a controversial cover by  flame haired chanteuse Florence Welch) that they garnered adoring attention and rightfully earned their place on the indie rock stage.

We discuss the band’s foundations in punk mentality and their lack of ease with the notion of being too ‘commercial’. Willett is both thoughtful and commendably practical when touching on these issues. He describes the band’s inherent inclination to have strong principles about why a song should be written and what makes something good, but there’s also an experienced acceptance as to how success works. “I think it’s really a survival of the fittest thing. I know so many people who are great musicians who will never do music on the level that we do and that’s a strange thing. In many ways some of our good fortune is that we’ve learnt how to hustle.”  The hustling Willett refers to is his way of coping and adapting to the constant challenges that the band face in keeping this success going, from acquiring fans to learning how to write and film music videos. He might be a raw and talented musician, but he’s also keenly aware of the rules of the game that he and the band are playing.

If the first album was character driven, Willett describes the second as more abstract. “The second album was really very different. We had toured the first album for so long, I mean for probably like two and half years all said and done, so the second album we just said ‘you know what, let’s get started on it, let’s write songs’. The second record is less of a clear statement than the first record is, it’s a little more foggy and abstract and I figure a lot of it was because I wasn’t home long enough to have any clarity in my head of what to write about.”

Is it fair to say Mine Is Yours is somewhat of a coming of age album then? “It’s far different because of its more personal roots,” he concedes. It’s also different because the first two albums didn’t go through quite the same process as this latest offering, nor were they worked on by Jacquire King, one of the most respected and prolific producers today (think the Kings of Leon, Modest Mouse and Tom Waits). Willett admits that the production process on this album has been a step up, but maintains that it is still low-fi compared to other bands. It’s not clear if he’s explaining or excusing, but the outcome is an album of real achievement; their soul-punk sounds are at once roaring and gentle and their lyrics masterful.  The title song, ‘Mine Is Yours’ is beautiful, and hopefully enough to keep Mrs Willett’s spirits up while the Kids are out to play.

We chat about this new phase of Willett’s life; clearly the transition in his relationship has had a profound impact on his song-writing.  “I guess I’m at the age where I wanted to write something more personal,” he replies. He dismisses writing too much about one’s love life as corny and annoying however, deeming it as forming the basis of most bad pop music. “It’s about finding a place where you can say something about yourself that’s profound and interesting,” he explains. What seems to have come out of this head-space is a profound and interesting set of songs; songs that when performed live could easily hold up in a stadium just as well as blow your mind in a tiny venue. “I felt compelled to write not just about myself but real life stories about the people around me. I think really overall what the record is about is a period in your life, a feeling in your life where people’s relationships take a turn, where your life becomes more serious and so what commitment means.”

One might assume the track ‘Finally Begin’ is very much in honour of these thoughts; it boasts all the melodic riffs and epic vocals of any big pop-song out there, but yet it’s cleaner and more passionate than any big pop-song out there. Add to this the Cold War Kids ability to pen an utterly captivating tune (which is showcased to perfection in ‘Royal Blue’) and you’ve got an album that deserves massive attention.

Willett talks of what his new marital situation means for the front man of a huge and frequently touring band. His musings are very honest – he says quite mildly, “In many ways I’m much more married to all the guys in the band than I am to my wife. This life isn’t a traditional lifestyle where you’re at home; we’re always gone, and the band always comes first before everything.” Let’s hope his wife either knows this and is comfortable with her ranking, or is blissfully unaware and doesn’t read her husband’s press then. Saying this, he’s engaging, can play the piano and he does enjoy a sensitive ponder about how people fit together and what loyalty means. These are good things and have made for a terrific third album.

Wrapping up succinctly on this omnipresent theme of his relationships with the people around him, in this case between himself and his band-mates, he says, “In many ways it’s much more like a family than a friendship. In a family there’s a lot of duty; most of what you do is duty bound and I think that in the same way our friendship is like that in the band. This is our job, this is our life, we work hard and make everything happen because that’s who we are.”