Ask the DJ: Mynth – Top 10 Songs by Our Childhood Heroes

Austrian sibling duo, Mynth, released their latest single ‘Mirrors‘ just last month, a song about the twins that make up the band and how they reflect in one another. But Mynth also mirror their former selves as a band. On the surface, they changed to a lighter sound, less brooding and melancholic, but at the core it is still their characteristic interpretation of electronic downtempo pop music.

2017 saw Mynth win an Amadeus Austrian Music award in the Electronic/Dance category, and early next year will see the release of their second album, a follow-up to 2016’s Plaat II, and debut EP Polar Night, released via Seayou Records in 2015.

“We grew up in a very open-minded music affine family household,” say the twins, Giovanna and Mario Fartacek. “There was always music at home and to be honest we are still jealous about the record collection of our parents. We did our first festival experiences when we were about 15 years old, and I still don´t get it, why we were actually allowed to go to a festival with 60,000 people listening to hard-rock, surrounded by mud and pretty much any other body fluids. Back in the days it was exciting and fun, today I would say it was and still is an important part of our personal musical development, as listeners and furthermore as artists. Here are some songs that imprinted our childhood and made us the musicians we are today.”

“I can remember me as a little girl standing in front of the mirror (yes in a random way) singing along to this song. Big dream ahead, performing this song at the Mini Playback Show. I loved dressing up, putting lipstick on and lip syncing this song for hours. Starting point of my passion for singing.”

“This song sums up our childhood. Our dad used to play this song to us quite often, telling us how happy he is to have us in his life. Mark Knopfler, guitar hero, also a big role model for my brother. In December 2016, we played this song in an acoustic version at Radiokulturhaus in Vienna. Now we dedicated the song to our parents and told them we happy we are to have them in our lives.”

“The band, and especially Slash, is the reason why I started playing the guitar. The song was one of the first songs I tried to play with my first band, then I recognized that everything in music is the energy. Guns N’ Roses is one of those bands, who showed this in their best times.”

“With this song I discovered stoner rock. Since this phase, half time music and powerful sound walls are deeply anchored in our writing processes.”

“No words needed. One of the best Red Hot Chili Peppers songs, also most important songs in rock history. In my opinion.”

“At the age of 12, when I was a young boy, I was a huge fan of Slash and Lenny Kravitz. I found this song and recognized, that they did a song together. I couldn’t believe it, this pretty much sums up my musical roots, my teenage years.”

“This is one is one of the favourite songs of our parents. Since we were little, we always listened to that song at home on cosy weekends. This song reminds me on the easiness of childhood and now a true legend that will always be remembered.”

“I was living in the US for half a year. This was my punk-rock phase and I really had this thing with Rise Against, also saw them in concert at Summerfest in Milwaukee. Whenever I listen to them today, this America movie starts playing. High-school memories, yellow school busses, pretty cliché, but I guess that´s what America is. Time of personal growth.”

“The Beatles’ Revolver was my first album, which my dad bought for my birthday. I don´t know why, but I wanted to have a Beatles record. I also love the cover artwork by Klaus Voorman, who did this spacey collage of drawings, and photos complemented songs that reflected the Beatles´ LSD experiments during its production. I loved it when I was a little girl.”

“The chorus of this song caught me right away. The video of her driving the car with her (nowadays we would say ‘hipster hat’) red hat, so simple but in this case also classy. I think I didn´t really understand the lyrics till my English teacher in high school did a listening comprehension about this song with us. Yes, he was probably one of the coolest teachers ever! We worked through the lyrics and it just hits the nail on its head. In a few words, this song describes how fucked up life can be sometimes.”

Mynth’s latest single ‘Mirrors’ is out now. Their new album will see its release in early 2018.

You can listen to all Ask the DJ playlists on the FMS Magazine Spotify channel. Find Mynth’s playlist HERE. 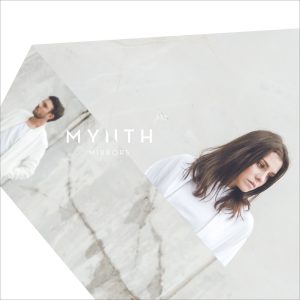