Ask the DJ: San Eco – Top 10 Cinematic Masterpieces That Sound Like They Were Produced For Films, But Never Actually Made The Big Screen… Yet

San Eco combines the unique approach of two musicians, one with a footing in innovative electronica, the other in bombastic indie pop. Five years in the making, their debut album, San Eco, finds them drawing influences from Fela Kuti to Slint, Nathan Fake to R.E.M, into a delicate and emotive electronic alt rock treat.

Morris Cowan (Adam Taylor) cut his teeth in the electronic music scene in the mid-noughties, and since then has released for Nottingham based Wigflex imprint and German label Zaubernuss. Tom Edney’s brand of alternative indie songwriting has also earned him a considerable following. It was during the recording of Cowan’s Six Degrees and Edney’s The Manchester Underground EP, that the two actually became aware of each other’s music – listening in through a wall between neighbouring studios.

Cowan tabled an offer of a session, and five years of creativity and hard work later, they released their debut album San Eco, on Manchester label Beatphreak. The self-titled debut follows ‘San Eco‘, the single.

Check out their Top 10 cinematic masterpieces that sound like they were produced for films, but never actually made the big screen…yet.

“Was David Axelrod ever involved in the making of a song that didn’t sound like it was intended for a 1970s Hollywood blockbuster?”

“The intro to this is like the perfect music to soundtrack your final moments, as your life flashes before your eyes. Be such a jam for a funeral.”

“This song evokes images of returning to the green, green grass of home after an epic Dorothy/Wizard of Oz type coming of age journey. Perfect for a film with a happily nostalgic ending.”

“About 3.56 in you hear the heavens open like Moses parting the waves. Biblical.”

“You couldn’t just drop this track in a flick willy-nilly. You’d have to shape the images around the sounds and create an original movie especially for it. Literally one of greatest songs ever written.”

“All about that cello (I think!) sample that pops up midway through, very filmic. Track for an end of season HBO style montage. Sh*t, whack the whole of Endtroducing down here in fairness.”

“Ahhhhh it’s the movies, you need some sci-fi don’t you. But then all that bombastic action music is on a 7000000 piece orchestra, so let’s go in the other direction. One man and his synths. Bliss.”

“End of the world, going to have to pick a 20-minute epic. 16mins30 in for the ultimate musical denouement, many a film would be lucky to have it. Almost worth a redub somewhere…”

“And for a sombre moment, perhaps a little cry, there’s surely a story out there that needs a piece of this, shivers and all that.”

San Eco’s self-titled debut album is out now via Beatphreak.

You can listen to all Ask the DJ playlists on the FMS Magazine Spotify channel. Find San Eco’s playlist HERE. 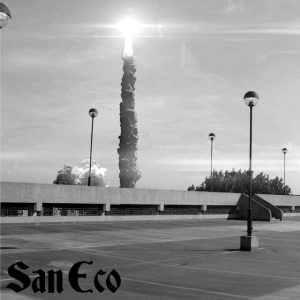