Today, sees the release of full length debut, Is, by Bleeding Heart Pigeons, via Virgin EMI.

The album – self-produced by the three piece from West Limerick – is a collection of well-crafted pop songs, filtered and layered with heavy synths, feedback and delay. Mixed by David Wrench (Jamie XX, FKA Twigs, Everything Everything), the record is a continuation from the band’s Hallucination EP, a surreal journey finally reaching its destination.

Bleeding Heart Pigeons are completed by Michael Keating (vocals and guitar), Brendan McInerney (drums and backing vocals) and Cathal Histon (synthesisers, sampling and backing vocals). The trio hail from rural Ireland and first met around eight years ago, only recently leaving their teenage years behind.

Having signed a record deal whilst still in school and practising in a parent’s shed, it has taken considered time to put together the songs that now make up Is – a collection of work that effortlessly meshes together multi-layered and perfectly constructed songs evoking whispers of Interpol, Bjork and Wild Beasts.

Is is available now, via download and on limited edition double vinyl. 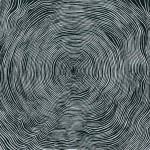