Cabbage @ 100 Club: Mossley Quintet Bring Their Own Brand of Modern, Politicised Punk to the Capital

One of the UK’s most widely tipped new acts, Cabbage, played a sold out show at London’s historic 100 Club last week, bringing their own brand of modern, politicised punk to the capital.

The Mossley quintet came onto stage to rapturous applause and launched straight into their newest single, ‘Arms of Pleonexia‘. Muscular and powerful, it served as a perfect opener, with the refrain of “how long until we take responsibility” introducing their poignant lyricism to anyone in the audience who wasn’t quite sure what to expect at that point. Their finest moments on record have been those that blend their socio-political commentary with dark humour and combine it with a soundtrack that channels the drive and energy of punk with the infectious hooks of an indie band. These are also the moments that draw the best responses from the crowd on the night, with a riotous sing along to ‘Necroflats in the Palace’ and ‘Terrorist Synthesiser’ the result.

With five EPs and 36 singles to draw from there is a lot of potential material to choose from, particularly for a ‘new’ band. On the whole they got their selection just right, with a mid-section lull broken by the memorable ‘Tell Me Lies About Manchester’ and ‘Uber Capitalist Death Trade’. Playing in support of their forthcoming album, Nihilistic Glamour Shots, due to be released 30 March, they treated fans to some new music on the night.

These tracks show great promise, with the likes of ‘Preach To The Converted’ and ‘Molotov Alcopop’ retaining much of the anarchic idealism of their earlier work. ‘Preach To The Converted’ is expected to serve as the album opener and on the night was frenetic and possibly more punk than anything the band has released to date. Contrasting this with the train service baiting post-punk poetry of ‘A Network Betrayal’ is testament to the musical avenues the band could explore.

‘A Network Betrayal’ also suggested why a support act like The Rhythm Method was selected. At face value, the trio who blend ’90s drum beats, thick house-infused guitar work, a Just Jack-esque lead and saccharine female backing vocals would not be the first band to come to mind. However, their lyrical topics ranged from Tory baiting and the closure of live venues in their hometown, London, to relationships and the impact of drugs, and it is this activist focus that brings the two group’s disparate sounds together. At times it sounded a little cabaret but there is certainly potential in their work. The expansion to a more fulsome band set up will undoubtedly help the transition from record to stage.

Cabbage, on the other hand seems perfectly at home in the 100 Club. Having played over 200 gigs in the past 24 months, this should come as no surprise, with the band exuding an effortless charisma. This is particularly true for lead singer Lee Broadbent and guitarist/vocalist Joe Martin. They also remained up close and personal with their audience, hands reaching out from the crowd to paw at their idols. This reaction shows the strong following the band has developed, with the fans age range testament to the broad appeal of the band.

Their new album promises to consolidate this and potentially launch them even further into the mainstream. Their raw song writing and musicianship has endeared them to many so far, but there is a risk that if they seek refinement they lose their essence as a band and if they don’t they may never fulfil their true potential. Approaching Nihilistic Glamour Shots therefore poses an interesting conundrum and makes for vital listening in early 2018.

Cabbage are completed by Eoghan Clifford (guitar), Stephen Evans (bass) and Asa Morley (drums). Nihilistic Glamour Shots was produced by James Skelly and Rich Turvey (Blossoms, The Coral) at Parr Street Studios in Liverpool and features already released tracks ‘Gibraltar Ape’ and ‘Celebration of a Disease’ alongside 10 new tracks. It is due for release on 30 March via Infectious Music.

There are also a number of live shows remaining in February and April as well as the band’s own Manchester all-dayer at the Ritz, ‘Glamour at Thee Ritz’, with The Rhythm Method, PINS, Witch Fever and Lady Bird already announced. Tickets for all events are available HERE. 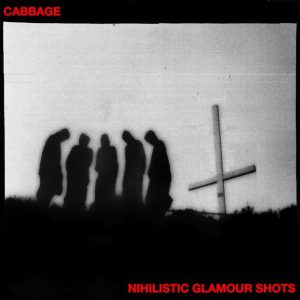