Childcare Revisit Their Best Moments to Date on Debut EP, Made Simple

FMS favourites Childcare release their debut EP, Made Simple, a typically playful record full of wit and humour but tempered by dark undercurrents and a strong sense of musical maturity.

Recent single ‘Dust’ is a post-apocalyptic epic that sees the London quartet exploring mankind’s extinction, with the usual blend of strong vocal melodies and powerful guitar work, with the added extra of an angelic choral finale. As frontman, Ed Cares explains, the track “describes a roasting high-temperature cooking experience and the final thoughts of a man approaching his maker” and builds on the band’s exploration of anxieties in their previous releases, as the wonderful refrain questions why “I’ll never grow old, I’ll never become the man I hoped I would become when I was young, I’ll never be famous, I’ll never be loved.”

Following the release of ‘Dust’, all of the tracks on the EP have been previewed previously and toured extensively. The EP should therefore be treated as a retrospective of the band’s best work to date. ‘Film Club’ is a light hearted, feel good track packed with the honest storytelling and modern urban songcraft, matched by the upbeat musical rhythms the band has become renowned for. Their grasp of melodies is reflective of the fantastic backstory of a Cares who was acting as a male nanny in west London before six year old Katie heard him humming a melody and convinced him to form a band. He has since been joined by Emma Topolski on bass, Rich Leagate on guitar and Glyn Daniels on drums.

‘Kiss’ meanwhile plays Cares and Topolski’s vocals off against each other and is a punchy post-punk number packed with tight rhythms and crisp musicianship, whilst ‘Omega Grey’ has been available since 2015 and has touches of the Foals at their growling best. Leagate’s guitar line evokes memories of film scores as Childcare prove that they aren’t just a feel good indie band, but are capable of fantastic songwriting and blend their strong pop sensibilities with a musical drive and range that moves them beyond lightweight chart friendly indie fodder.

As a result, the band are drawing strong support from tastemakers and radio alike, and 2016 saw them playing their largest shows to date in support of Bastille’s arena tour as well as FMS’s own night as part of Blogtober. Following the release of this EP, we can only hope for more new music later this year.

Made Simple is out now. Catch them live this summer, dates below. 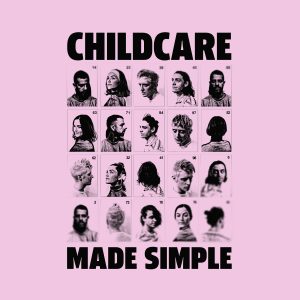