Cronicle is the solo project of Stockholm’s Melanie Mohlkert. Having spent several years fronting successful pop-punk outfit Tantrum To Blind, it was time for Mel to take a step back and work out what she wanted to do next.

As it transpired, that was moving to London and creating Cronicle. As in a combination of pop/electronica and Scandi songwriting, we’re catching up with the Swedish artist after the well-received debut single ‘Head Up & High’ which video is premiered today, right here, along with our Q&A from Mars…

01– Which colours do you associate visually with the recording & listening of this song?

“Red and blue. Red for the heartache and high energy and blue for the sorrow and pure truth behind it.”

02 – Which Records /EP/Song or Remix were on your playlist on repeat, before, during and after the mastering of the single?

“Hmm it was quite a wide range of electronic/pop and emo/alt rock really. This song was produced over quite a long period of time but I guess what influenced it was probably my obsession with Ellie Goulding’s Halcyon Days album, and I also listened to a lot of Broods and Little Dragon. Regarding tunes on repeat, I gotta include ‘Think It Over’ by Canterbury, ‘The Difference Between Medicine And Poison Is The Dose’ by Circa Survive and ‘Arcadia’ by Apparat. Pretty random mix I guess haha.

03 – Memes /Habits: Describe to us your daily routine in the studio, and some key-situations, that are reminding you of the ‘process’ of making of this song

“There’s no such thing as routine to my music making. I tend to be really impulsive when I write and it’s usually influenced by real life events. This song is a pure example of that.

“I had received the most heartbreaking phone call from my best friend. She was gasping for breath through her tears telling me the love of her life had just told her he didn’t love her anymore. A pretty common tragedy, falling in love and then getting your heart broken. But what made this so devastating was the fact that she had just lost her mom to cancer a year ago. And she is one of those people who never used to believe in love. But this guy came into her life just before her mom passed away and brought something beautiful into her life while she was going through something so unimaginably painful. I think they built a very special bond because of the situation, some light in the dark. But then, out of nowhere, he and everything that made sense to her was just gone.

“I was at a loss for words listening to her saying how much she hated him and loved him at the same time. How she wished she had never met him but would do anything in the world to be with him again.

“A moment later, the words of this song just came pouring out of me. I wrote it together with my very talented deep house/techno-producing friend Joakim Wolfert and Liverpudlian producer Rich Turvey, who also re-recorded and added additional production.

04 – Please, describe, let us know who are your teenage idols and the artists/role-models that you’re looking up to as daily’s inspiration, right now

“I don’t think I had proper ‘idols’ when I was a teenager, I guess I always thought Gwen Stefani was badass but I didn’t really listen to her music much. I mostly listened to bands like Taking Back Sunday, The Used and Nirvana etc. I have way more idols and female artists that I look up to and listen to today. K.Flay, Grimes, Banks, Lorde, MO, FKA Twigs and Bishop Briggs are all sick and true inspirations for me. All in different ways but in general empowering talented females which I’m always a fan of and they make ace music too.

05 – Behind The scene: The Making of the video, from the story board to the finish product, please let us know of any fun story or detail behind the creation and CO. of your debut video. 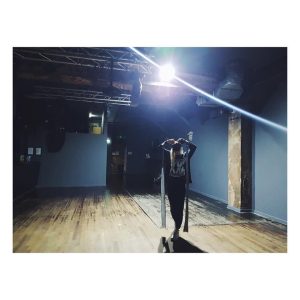 “This video came about because a filmmaker from London, Riccardo Fusetti, contacted me on Soundcloud. He basically said he was looking to do some more creative and interesting projects and was contacting musicians that he genuinely liked to find people to collaborate with. He said he loved ‘Head Up And High’ and asked if I’d be up for making music video together.

“We met for a coffee and it escalated quite a bit from there. We didn’t have a budget, being two creative DIYs already just trying to survive in London, but I had a very strong vision for the song and now this talented guy who was so keen to work hard and make my vision reality. So I kinda just went for it.

“I used to dance loads before the years in my old band. So when starting this new journey with Cronicle, it gave me a chance to involve something I love and miss a lot. Especially now being the first time I put my music into something visual. 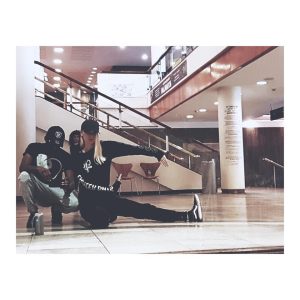 “I got my friend Raz Osman involved who’s a very talented dancer. We met up in the most random places in London to work on moves and the choreography. Anywhere that was indoors and had a big floor we could use for free. The live venue, Oslo, in Hackney where I used to work as a bartender for a while, let us use their club room when it stood empty. We also went to Southbank Centre and shared the open space by the wardrobes with tons of other random dancers from London who were practising their moves and having small dance battles. It was really cool!

“In the meantime, Riccardo and I were researching cheap locations for the shoot, ran around London looking for ropes that wouldn’t hurt my wrists too much and tried to figure out how to scout the perfect ‘heartbreaker’ for the video. I also bumped into this super passionate fun stylist through a friend’s friend who wanted to jump on board the project, Giulia Koller. She sorted some cool stuff for us to wear and was, in general, a true spark of inspiration and energy throughout the whole production. 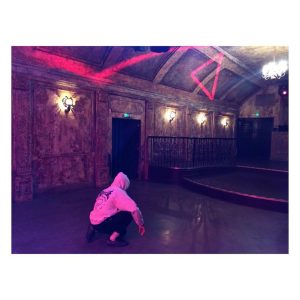 “Thanks to my friend Pearse Grady we ended up getting introduced to George Sewell who is one of the promoters for the beautiful venue Omeara by London Bridge, where we ended up shooting this whole thing. Pearse also hooked us up with his best mates little brother Jazz Jamieson who is this gorgeous professional dancer and model – a perfect heartbreaker.

“In the end, we had a team of around 13 people on set at a beautiful location on a Sunday. Riccardo even got to borrow some incredible gear to shoot with and it was all happening. We shot it all in one day, loads of things went wrong and it was super stressful, but knowing that everyone who was in the room was there and working really hard because they were into it was a truly special feeling. And I and Riccardo are both stoked about the result!”

Cronicle plays Öbaren in Stockholm on June 11th. Save the date.