Sweden’s Janice is set to play The Great Escape, this Thursday 17th May – her first UK performance following the release of her debut album, Fallin’ Up, via Sony Music.

“It’s basically just stories about me, a lot about love, about how I used to be and who I want to be,” says Janice, describing her debut as a near-concept album. “Me, going from a place that’s quite dark and unstable, and then finding my way up and finding myself. I guess I was like every other teenager, only with a lot of drama!”

It was the single ‘Queen’ that opened doors and Janice started to became one of the most interesting voice in Sweden. Fallin’ Up has been labelled by Swedish press as a future classic, its songs of dark hopefulness dealing with feelings both personal and universal. It’s intimate yet immense, the deep bass and heavy beats providing the perfect ballast to bolster Janice’s powerful voice and searingly honest song-come-diary entries, and this year saw her nominated for a Swedish Grammy as ‘Best Newcomer’.

FMS caught up with Janice with our Q&A from Mars.

01- Which colours do you associate visually with the recording and listening of your debut album?

“I think black and while describes it quite good. Which also fits with the concept for my visuals. Black because that colour describes the place I started at which was a dark and destructive time. But also a place I learned a lot from and developed as a person. White stands for the lights along the way. Red is a colour I see when I listen to a few songs from the album which represents the strong emotions. Angry and Loving.

02- Which Records/EP/Song or Remixes were on your playlist on repeat, before, during and after the mastering of your debut album?

03- The album cover is pretty iconic and fashionable, what was the inspiration behind the concept and is it something that would you like to continue or change in the next release?

“I wanted it to be simple, honest, raw and sophisticated and I got inspired by Jessie Ware’s and Alicia Keys covers. For each single release up till the album I wanted to show more of me and all my different sides.”

04- Furthermore, how much do fashion and trends influence your outfits on stage, and your stage-persona overall?

“I love fashion and my thing is to mix different centuries and materials. I think I got the ’90s vibe going on with an ’80s twist, haha. I don’t like to do things everyone else does but I guess I get influenced by some trends, don’t we all? I always want to put my own flavour on it though.”

05- Which idols as a teenager made you decide to start singing and conquer the world?

“Whitney Houston and no other!!!! Seriously, I wanted to become Whitney when I was a kid. After a few years I realized that it’s not possible, that I was just suppose to sing. But yeah, she’s basically the reason why I even started. Sade and Brandy were and are also huge idols.”

06- With TGE approaching and other shows in the UK… what are your hopes and dreams about it?

“I’m just so excited to play in the UK. And also a cute thing, I was in Brighton for the first time with my boyfriend three years ago too see Kwabs and Zac Abel live. It was epic and it was our first trip together and it was special in so many ways. I fell in love with the city and it feels good to be back now and play myself.”

07- Songs in this album are sometimes, different in genre from each other but still keeping your soul. Which direction/s, would you like to explore more for the next record and why?

“I’m actually back in the studio and very excited to see what to come. I’m going deeper into soul and RnB but that’s all I’m gonna say haha.”

Janice plays downstairs at Patterns, as part of The Great Escape, on Thursday 17th May. More details HERE.

Fallin’ Up is out now via Sony Music. 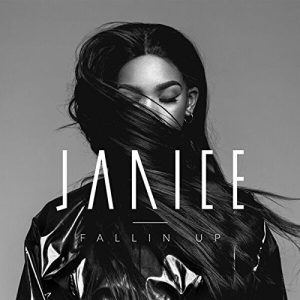