Formed in 2014, Naked Giants became members of Car Seat Headrest’s live touring band, but introduced themselves to the world as a band in their own right with their R.I.P EP in 2016, a blistering set of hedonistic garage rock and ’90s revivalism. Sluff picks up from that EP seamlessly, with ‘Easy Eating’ bridging the gap and appearing on both records.

Right from the opener, ‘Dead/Alien’, the tone is set – big crashing drums, thick basslines and fuzzy guitars swirl below snarling vocals. The band has been open in acknowledging that the record title has meaning to be “everything and nothing” and fittingly there is little in the way of deep lyricism across the album. The main recurring motif of death and loneliness dominates what is otherwise a record that seems designed to be played loud and carefree. The album hinges around a few standout moments, being ‘We’re Alone’, ‘Slow Dance II’, title track ‘Sluff’ and the jaunty ‘Everybody Thinks They Know’. These tracks capture the best of the band and see Naked Giants at their most distinctive.

Musically, first single ‘TV’ is a kaleidoscope of sound that takes in a range of influences as the band reflects, “From our perspective as millennials where everything is accessible all at once, there is no difference to us between punk and classic rock or anything like that because we’re all observing it at the same time through the same lens. And yes, history exists, but if you’re just flipping through something on the TV, it all kind of conflates together – kind of like the song does.”

With a broader musical palette than R.I.P comes touches of surf rock, emo, blues and psychedelia – there is even space for an eight minute acoustic ‘epic’, ‘Shredded Again’. A hard rock cliché maybe, and definitely an outlier on the album, but a sign of both the band’s varied influences and potential ambitions going forward.

However, much like Birmingham’s Superfood, whose debut Don’t Say That was heavily indebted to Brit-pop predecessors, Sluff exists as a product of its environment. Its sound was born in Seattle, the alt rock and grunge forebearers informing each riff and chorus. Having the record produced by Steve Fisk (Nirvana, Minus the Bear, Soundgarden, Unwound) was only going to increase these comparisons. Whether the band can move beyond this revivalist position and explore a greater individual identity (in the same way Superfood has) remains to be seen, but for now we are left with a record, which at its best cannot help but leave a smile on your face.

Sluff is available now via New West Records and can be streamed HERE. 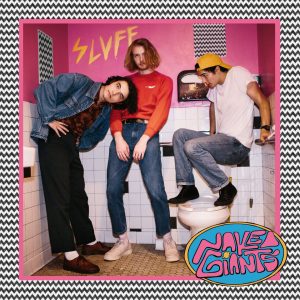