Peppermint B is the solo project of Denmark’s Steffen Westmark (The Blue Van) and his debut album, Head Perfume, is a refreshingly upbeat journey through ’90s indie and ’60s  inspired, big chorus pop.

The record moves with great pace through a wealth of sonic influences. Opener ‘New To Me’ shows the lovely tone to Westmark’s voice as the rolling track is awash in strings and rich production, bringing to mind the The Last Shadow Puppets debut album. Elsewhere, there are touches of Americana on ‘It Is Time’, a song that also shows Westmark’s strength as a songwriter as he reflects on the pressures of modern life, and ’90s fuzz on ‘Thinking ‘Bout The Kid’. There is even space for a saxophone solo, courtesy of Johan Bylling on ‘Amber Sun’.

Whilst the musical references are diverse, Westmark’s falsetto is central to the record, as shown on the likes of ‘Amber Sun’ and album standout ‘Venus  De Milo’, and it proves to be a key strength of the album. Whilst musically Head Perfume may not be breaking any new boundaries, the strength of personality and lyrical content of Westmark makes this seem largely irrelevant. There is a real poignancy and relatability to tracks such as ‘Friend’ and ‘Importance of a Kiss’ that takes Head Perfume beyond simply being defined by its nostalgic sound and pop melodies.

Nonetheless, across its 10 tracks Head Perfume is undoubtedly a feel good release, from the upbeat tempos and lush production, to the psych inspired artwork, “With my music, I urge people to seek out the positive, beautiful and true in everyday life and find their inner peace,” Westmark reflects. “We should revel in the good feelings and always look for the positive, for it makes us better people and makes us want to help each other.” Head Perfume comes as a precursor to the summer in that phase of the year that always seems the longest and hardest to get through. As you reach album closer ‘Because We’re Together’ it’s hard not to feel a smile breaking out across your face, as a sense of joyful innocence pervades the warm, carefree sound, a growing rarity in modern music.

Head Perfume was produced and mixed by Westmark and Christian Ki Dall in an underground studio in Valby, with the support of a range of established Danish musicians from the likes of The Rumour Said Fire, Mother Lewinsky and Boat Man Love. It was mastered by Brian Lucey who has worked with The Kills, The Black Keys and Arctic Monkeys.

Head Perfume is out now via Northern Sky and available to buy or stream HERE. 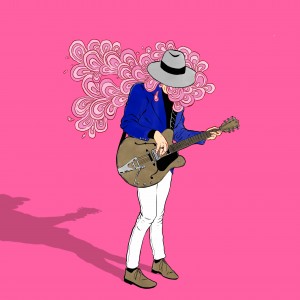