Directed by Ed Edwards of multimedia, award-winning independent film company, Ragged Crow Productions, and shot over two nights in a medieval house in Kent, it takes the form of a supernatural hallucination brought on by band members downing a strange potion during an occult gathering. The mesmerising spinning room imagery was achieved by attaching a tiny camera to an electric drill, then painstakingly layering multiple takes to produce a psychedelic, dream-like effect.

Merging effortlessly raw guitars with true rock n’ roll swagger, Saint Agnes have gone from strength to strength since they formed in 2014, releasing two sell out singles, a live EP and cementing their place as one of London’s most exciting live bands. With the camaraderie of The Kills, joint frontmen Kitty Arabella Austen (Lola Colt) and Jon Tufnell (Lost Souls Club) blend electrifying intensity with beautifully harmonised vocals and biker-bar rock riffs.

The band released ‘Sister Electric’ on limited edition lathe-cut clear vinyl that sold out in a number of days, while bassist and gear-head Ben Chernett has built a limited run of custom “Fuzzy Agnes” stomp-boxes. The single was recorded on tape at the analogue Soup Studios in Limehouse and engineered and mixed by Dave Holmes, being the first in a series of singles to be released in the same fashion. The band themselves produced it and it’s the first recording with new drummer Andy Head.

Saint Agnes are set to play the Hackney Wonderland Festival on October 15th alongside Mystery Jets, We Are Scientists, Swim Deep, Crocodiles, Demob Happy, Misty Miller and many more. Tickets are available here. 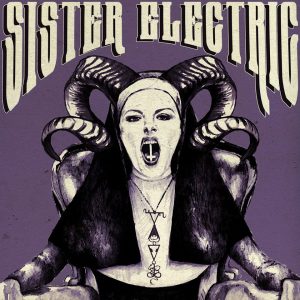