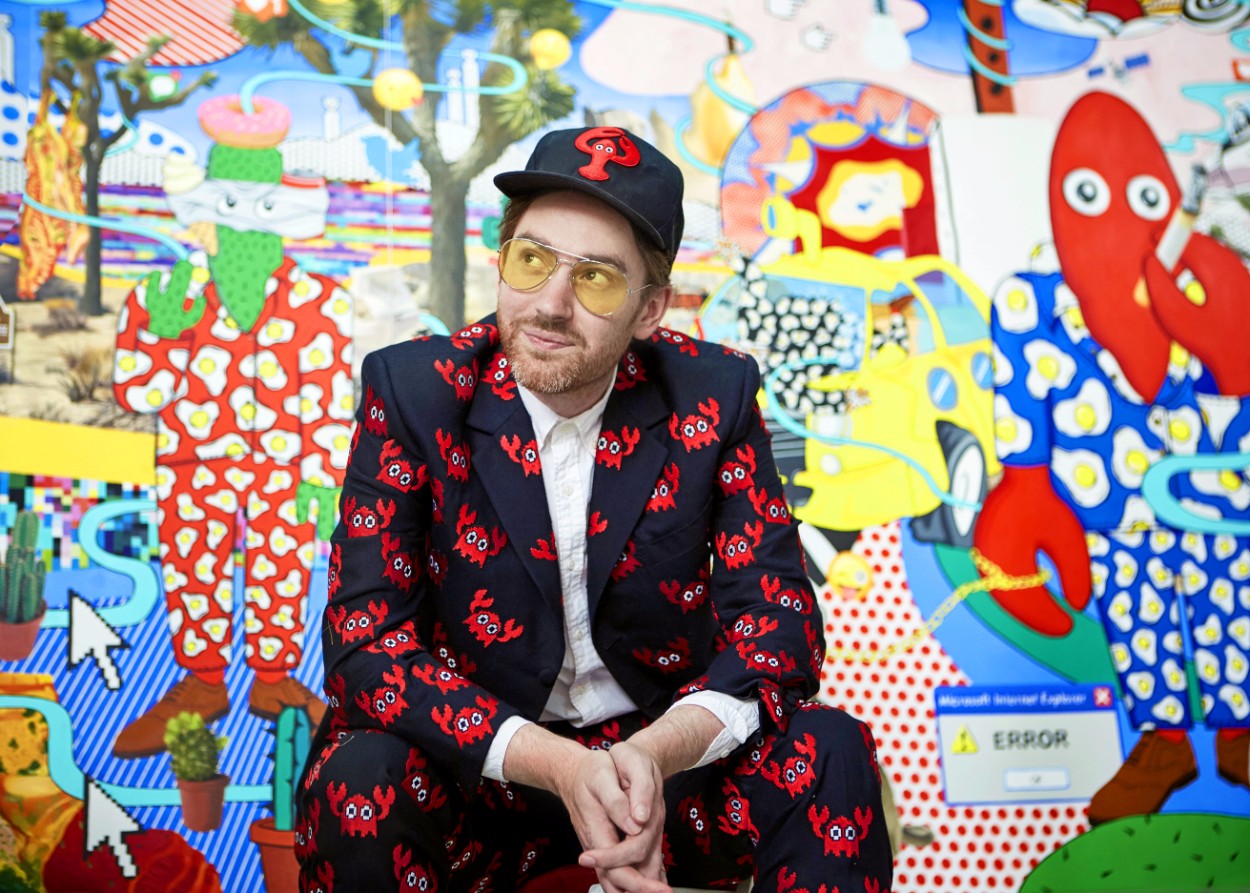 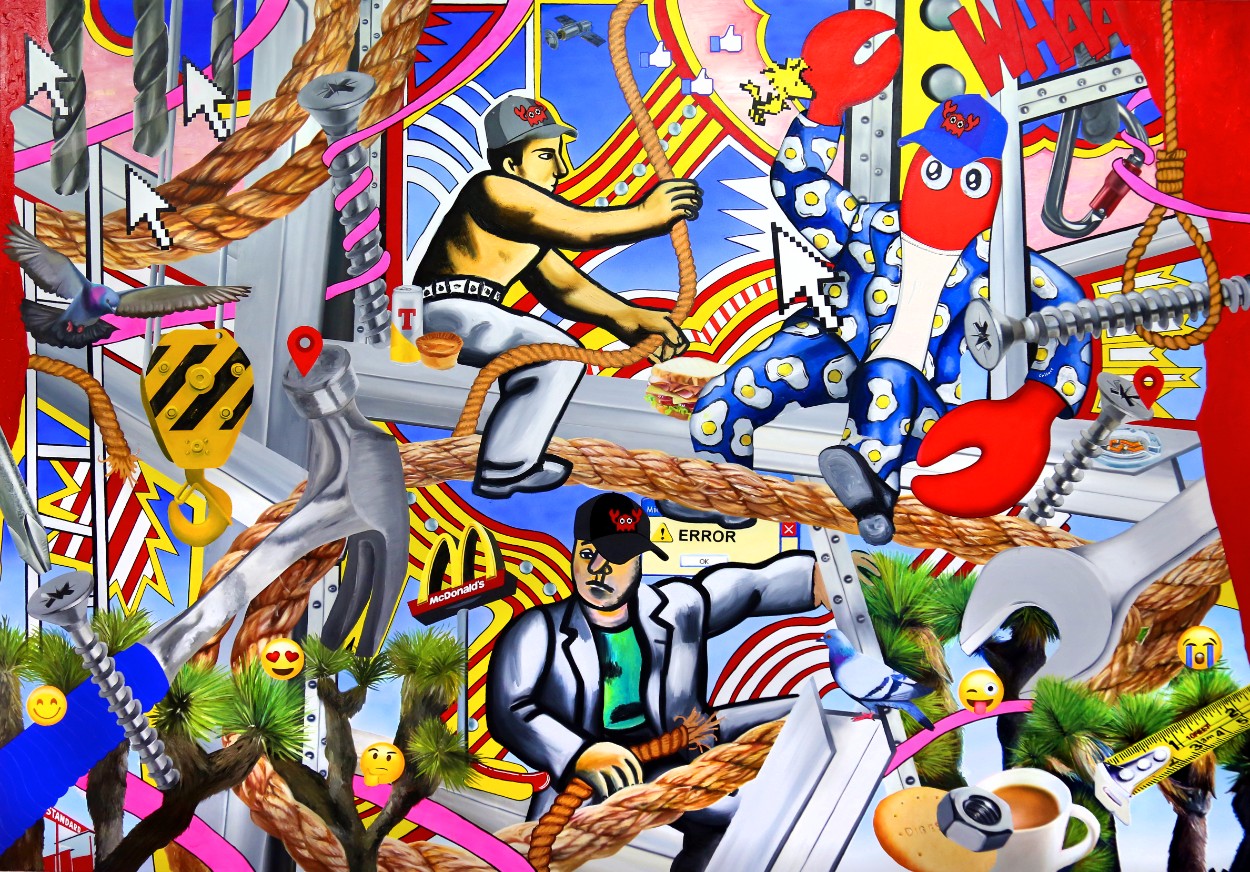 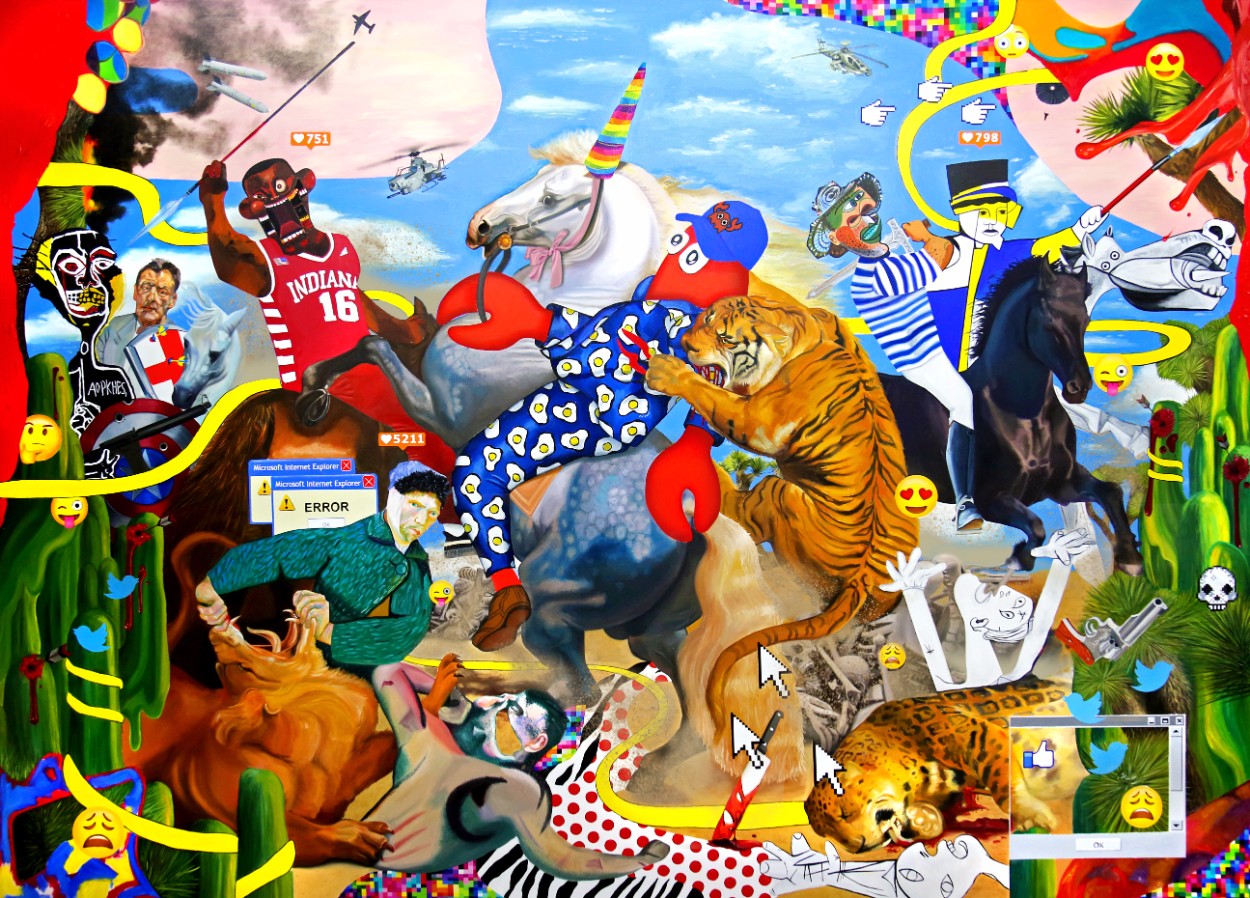 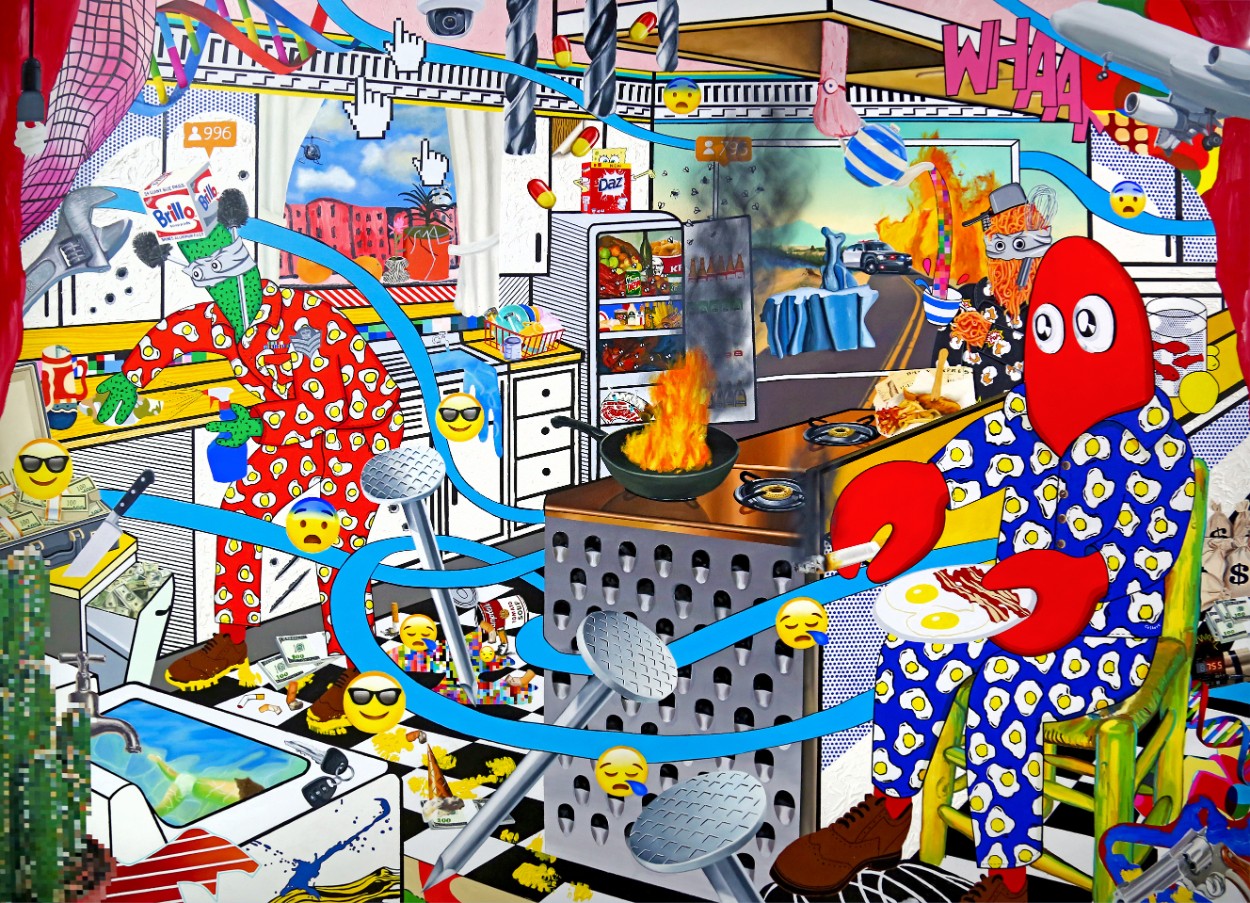 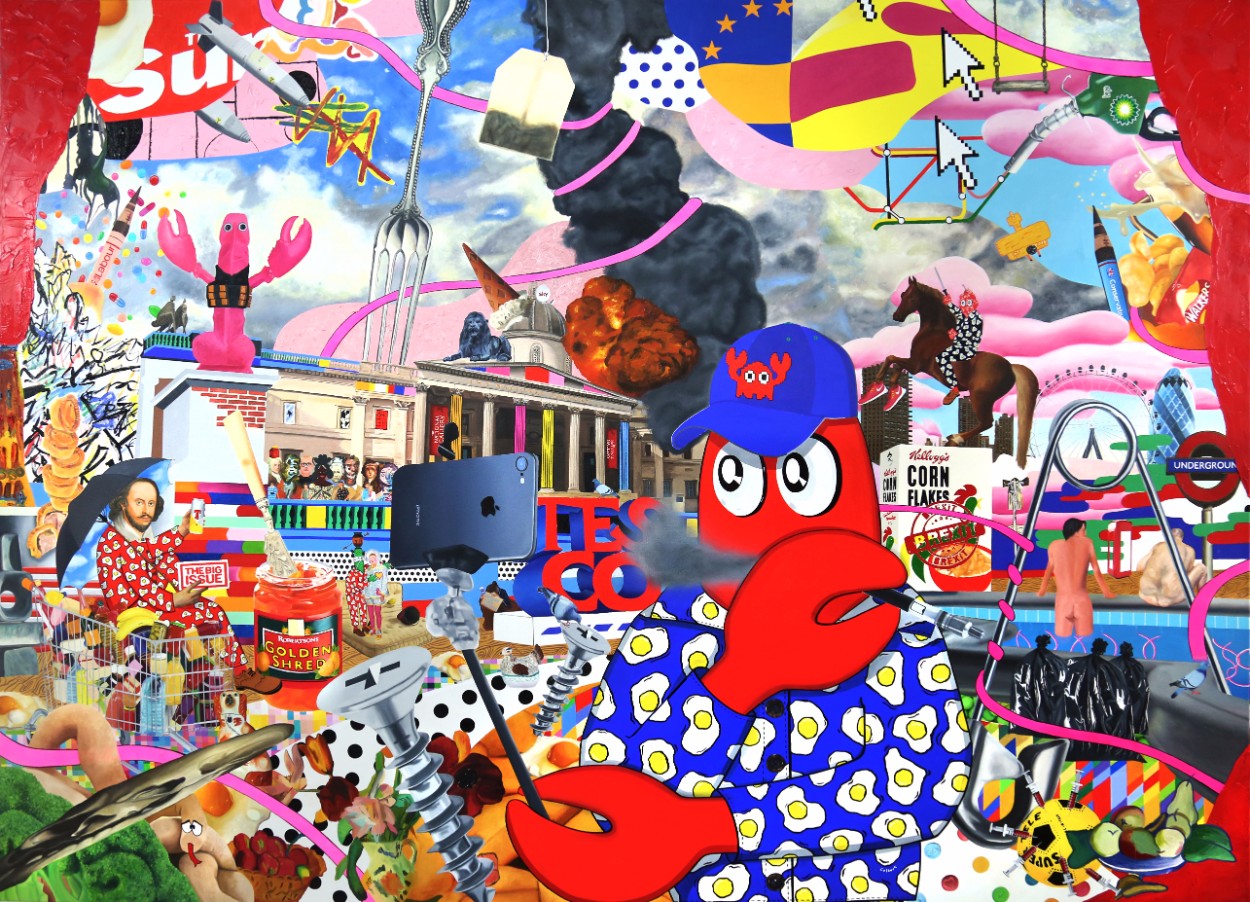 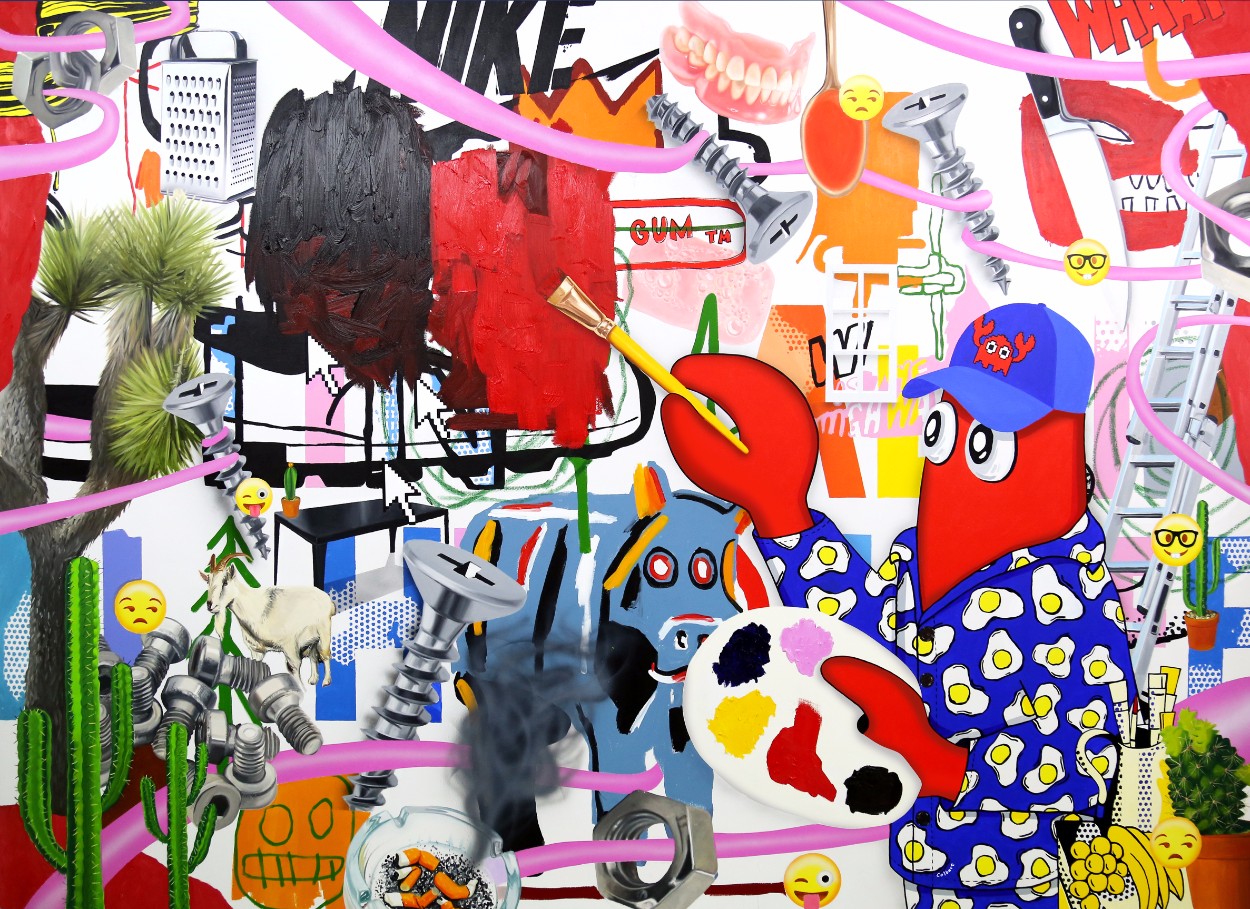 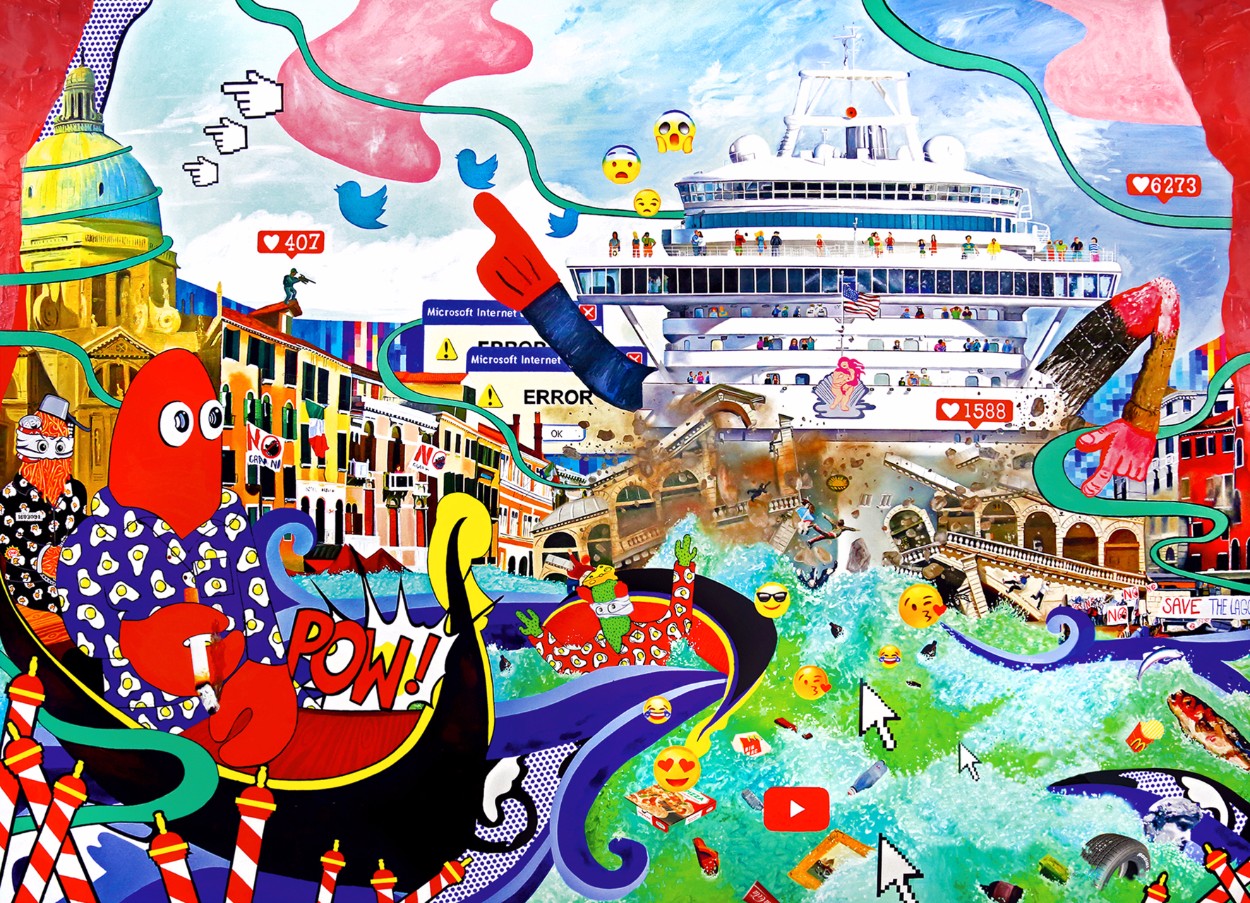 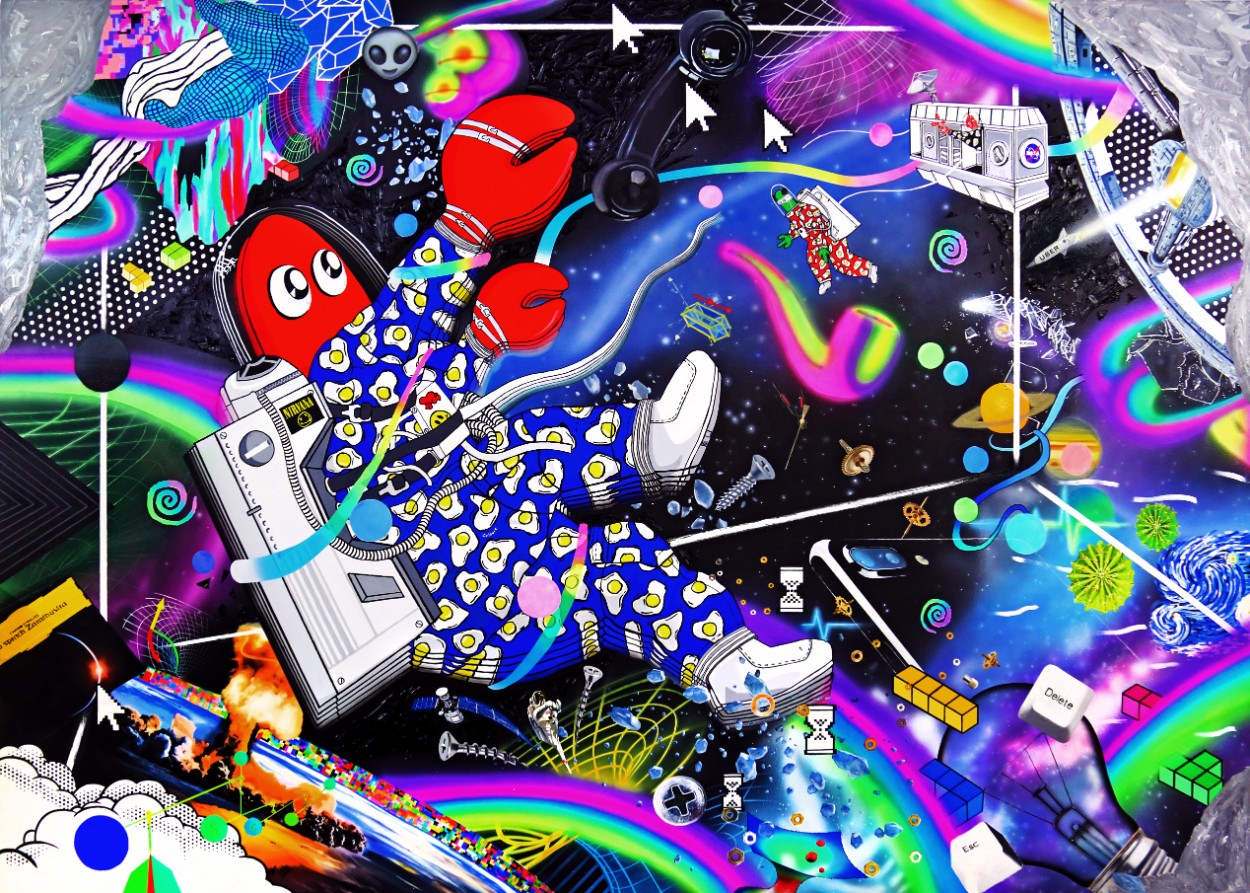 Artist and fashion designer Philip Colbert, described as “the godson of Andy Warhol” by Andre Leon Talley asserts his right to that title. From a man who made urinal dresses desirable enough to be sold in Collette Paris and Dover Street Market, he now makes his boldest move yet with a solo show of paintings at the acclaimed Saatchi Gallery in partnership with Gazelli Art House. 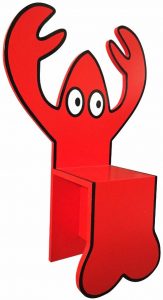 Colbert is best known for his idiosyncratic designs with his label The Rodnik Band making wearable art frocks that have won the countenance of Karl Lagerfeld and Cara Delevingne, who most-enthusiastically put herself forward to star in the advert for his brand hook-up with Snoopy for Selfridges. Some of the most avant-garde clothes horses in today’s fashion scene, including Anna Dello Russo and Lady Gaga have paraded themselves around in his attention-grabbing frocks. He’s currently putting his design head together with Kanye West on some bespoke items. His opening show at Saatchi gallery was awash with multiple glamorpuss red carpet regulars, wearing his sequinned dresses fashioned into cans of Baked Beans, glittering pencils – and even a cigarette. Rita Ora secured his services for her world tour proving that a Colbert look is not aimed at shy and retiring wallflowers who wish to blend. Having said that, even the fashionistas with a more timeless leaning, such as Sienna Miller and Plum Sykes, have been drawn into his wacky, colourful web.

Now he’s taken those rollicking pop vibes to the next level, by presenting huge vivid eight large canvases at Saatchi gallery. Attempting to “put the pop back into painting”, the paintings are jam packed with references and motifs of contemporary culture and art history. At the centre of each piece, Colbert is represented by his infamous lobster character mascot, who is clearly nonplussed by the animated, confusing world that surrounds him. Philip has said, “I paint lobsters, I make suits featuring them in repeat patterns, so people associate me with the lobster. So, I turned myself into one to open this show.” Created as a dialogue between himself and his pop forefathers, the paintings ruminate on their contributions in the face of popular culture and his own autobiographical journey within it. 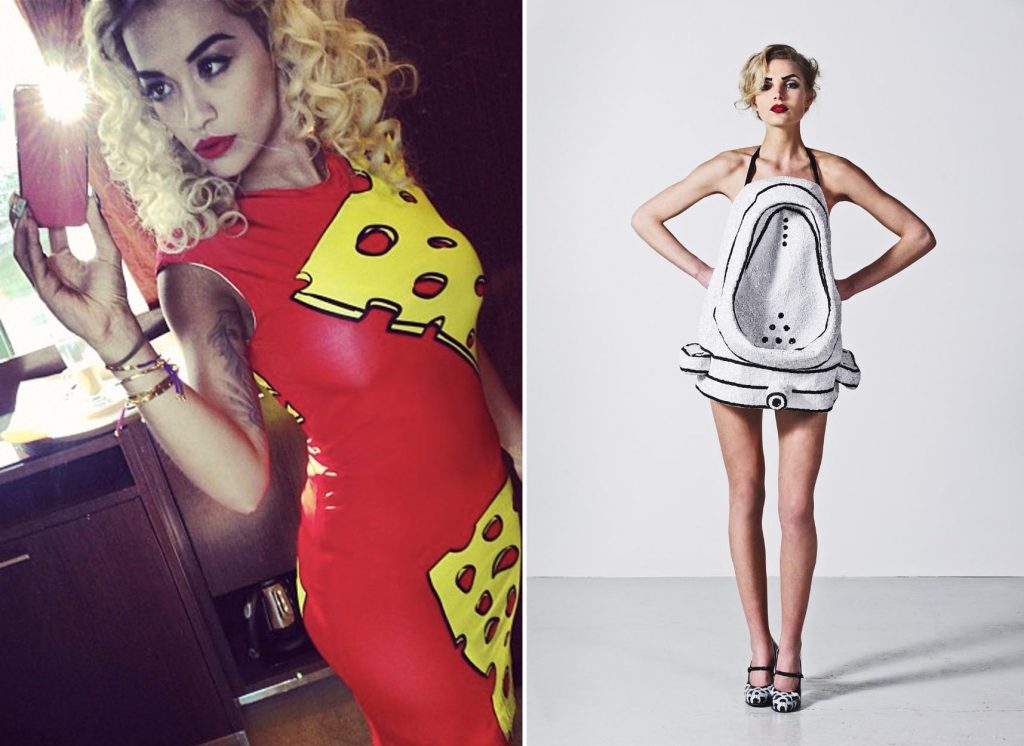 The paintings pay homage to pop art and cultural founders of the movement with elements of David Hockney’s swimming pool, Francis Bacon’s distorted portraits, Salvador Dali’s Lobster telephone, Man Ray’s ball bearings, William Shakespeare with a pint in hand. One of today’s best-loved commentators and artists, Grayson Perry makes an appearance as his alter ego Claire as part of the whimsical composition. Interlaced with these quaint motifs, the canvases are bestrewn with testament to life in today’s world and internet culture; Selfie sticks, Emoji’s, Instagram and Facebook likes, mouse pointers and computer error pop ups. 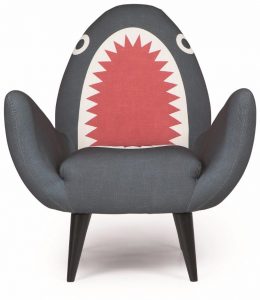 So, if Colbert is the lobster and he clearly, is as confused as we are, by a society that is reaching a point of brand, social, cultural and digital saturation. What Colbert’s shares in common with his pop forefathers is a commercial training in the visual vocabulary of mass culture. Andy Warhol was a highly successful magazine illustrator and graphic designer; Ed Ruscha was also a graphic designer, and James Rosenquist started his career as a billboard painter. Similarly, commercial, from graduating from St Andrew’s to moving to London to start a fashion brand, a world he knew nothing about, Colbert has spent over a decade creating a visual vernacular. By creating his world on canvas, he’s managed to cast himself alongside his heroes.