Having emerged in 2014 with the release of their debut EP, Yumi Zouma endeared themselves to listeners without ever having played a live show. Everything to date had been created online, without the band ever meeting given their disparate bases in Christchurch, Paris and New York. This technologically enabled existence seems fitting as, in spite of their deference to prior genres and styles, their music is effortlessly modern, shimmering and refined in both sound and production.

Willowbank, just released, is the follow up to their full length debut, Yoncalla, and provides more of the same rich dream-pop soundscapes and bewitching vocal harmonies. Whilst Yoncalla was recorded on the road, Willowbank is a product of being ‘home’ in Christchurch, with recording falling over the quiet and peaceful holiday season. Lead single, ‘December’, captures that spirit and the sensation of being at one with their roots informs the record.

There are numerous highlights across the course of Willowbank,with the majestic ‘Ostra’ the standout moment; lead singer, Christie Simpson‘s whispy vocals carrying such emotion and longing, the songwriting typifying a perfect pop track that won’t break the mainstream charts, before the thick and roving bassline plays the track out. Their clever approach to composing tracks is also seen on the disco inflections of ‘In Blue’, as a sax slides in to the mix and plays out the riff , with this attention to detail elevating the album above its many compatriots.

The album focuses on relationships and the passing of time and is underpinned by dark overtones of anxiety, dejection and defiance that sit in wonderful contrast to the weightless beauty of the vocals. There are also so many subtle stylistic deviations across the course of the album. ‘Half Hour’ is a slice of storytelling of lost love, complemented by the same kind of rich synth lines that Kavinsky, College, Drive and Stranger Things have managed to bring back in from the Eighties. The acoustic leanings of ‘Gabriel’ hint at indie pop in the vein of Field Music whilst the urgent electronic bleeps of ‘A Memory’ veer closer to house music.

The result is a highly accomplished modern pop album from a band that continues to impress. Whilst created amidst home comforts, Willowbank continues to push the band in new directions, explore new ideas and most importantly, delivers an effortlessly stylish album, packed with some of the groups best work to date.

Willowbank is out now via Cascine. 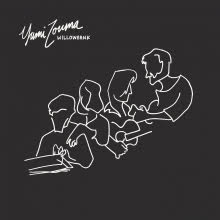