Manchester-based five-piece, AFFAIRS, have just dropped their latest single ‘Gracious World’, and are gaining deserved recognition, having released their Stained Gold EP and ‘Life of Leisure’ single last year. Their sound, which has been variously described as ‘electro-pop fused with guitars’ and even ‘audible chocolate’, has attracted praise from BBC Introducing’s Alan Raw, and the band have recently been aired on Radio 6 Music.

FMS caught up with frontman, James Robinson, and guitarist, Liam Grindell, in the rather grand setting of Leeds Corn Exchange after their set at this year’s Live at Leeds, the metropolitan music festival that promotes an eclectic mix of fresh and established artists and bands at venues all across the city. The guitar/synth band, who formed while they were students at Hull University, opened the Briggate stage, and confessed that they actually quite enjoyed being the ‘guinea pigs’ in kicking off the festival and being able to relax and take it all in.

“The idea of ‘Gracious World’ is really that the world can be your oyster if you want it to be,” says Robinson. “Go out and see new places and make the most of every experience.  Too many of us get trapped in the same routine, with dull 9-5 jobs we don’t really enjoy, purely for financial security and the expectations society throws on us. Rather than being stuck in one place, make the world home with the freedom and mindset to discover all it has to offer.”

The track was written by Grindell, who came up with the concept and wrote the music for it. Robinson then contributed some vocal ideas, and the single was born. Having already enjoyed working with producer James Kenosha (Dry The River, Dinasour Pile-Up, Pulled Apart By Horses) on ‘Life Of Leisure,’ it made sense to work with him again and they’re pleased with the results, “James really gets our sound and what we’re trying to do as a band. He has a great calmness in the way he works, guiding you in the right direction production-wise, while leaving his incredible imprint on your work.”

‘Gracious World’ is a strong offering, showing off Robinson’s powerful semi-operatic vocal style from the beginning, carried along by some very catchy hooks and jangly guitars. Its bright, upbeat sound somehow feels perfect for the summer. The lyrics in the catchy verses and chorus are repeated with profoundness; “so we’re saving the world; if we fight it, we’ll never know” is a rallying cry that screams out to be turned up and sung along to.

Although not vocally-trained, it’s interesting to learn that both Robinson’s parents are theatre singers, and he reckons that may have influenced his style and presence. Whatever it is, it sets AFFAIRS apart from other bands, with a nod to synth-pop from the 1980s. As for their new home in the North-West, “It’s not consciously there, but we always like to take influence from our surroundings. So I suppose there might be a Manchester influence somewhere.” While Grindell states that, “it just made sense when we moved there,” referencing the draw of the Manchester music scene.

As we made our way out of the fabulous Corn Exchange building, sunlight filtering through the huge domed roof, the guys were keen to go back to the same stage to discover new bands. Having made a tongue-in-cheek shout-out to some of the high-street shops of Briggate in between songs earlier, their humour and desire to show support for up-and-coming bands are endearing qualities. Those, coupled with their fresh musical style, certainly makes them one to watch in 2017. 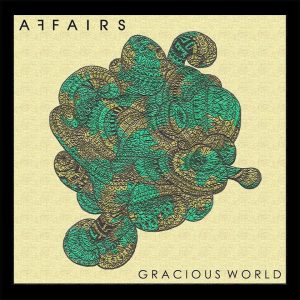