Ask the DJ: AK/DK – Top 10 Tracks from Brighton (Or Nearby… At One Time or Another)

Analogue synthesizer veterans, AK/DK, have made a refreshing return with their air-drumming anthem ‘Lagom’, the first single to be taken from their forthcoming album to be released later this year, having already gained radio support from the likes of BBC Radio 1‘s Huw Stephens and John Kennedy (Radio X).

‘Lagom’ resides within a clear love for electronic pioneers, Devo and Kraftwerk, yet resembles modern references to the recent revival of synth-pop in mainstream music. The pounding powerhouse of a track combines their trademark searing synth lines and their incessant double drum layers. Whereas AK/DK’s debut album (Synths + Drums + Noise + Space) was a strictly live and improvised affair, these new recordings showcase some more of their compositional flair. Alongside their relentless disco-punk drums and arpeggios, a more developed sound and style is now on offer.

AK/DK is Gee Sowerby and Ed Chivers, whose barrage of high-energy, and largely improvised, layers of fizzing arpeggios and crushing motorik drums has earned them places at many of the stages and festivals all around the UK and Europe. Some of these recent festival appearances include Latitude and Green Man.

“We decided to make a Top 10 of some of the bands we’ve played with and/or admired from Brighton over the past few years. This small seaside town has always punched above it’s weight in terms of musical output, producing a huge array of styles and acts. Obviously there are loads to choose from and this is by no means an exhaustive list – neither is it in any order of preference – and maybe they don’t all still live in Brighton or are fully active – but they’re some of our favourites.”

“Bunty is a musical force to behold; whether you catch her at one of her live audio-visual shows or a late night, psychedelic improvisation in some strange tent at a festival – you will be amazed. Here we see her full colour and imagination put to maximum effect – brilliantly mixing experimental sounds, light-hearted humour and deep sound system bass.”

“Fellow explorers of the synth and drums universe, Soccer 96 have always been amazing and totally inspirational. Now based out of the Total Refreshment Centre in London, they spread their musical genius wherever they roam, including their most recent collaboration as two-thirds of the equally astounding The Comet Is Coming. Incredible instrumental skills combined with super fresh musical taste make this a duo to take note of.”

“This trio have grown from strength to strength; from their early grunge like gigs to the recent powerhouse of an album, Abstract Figures In The Dark. Although you’ll find all the normal rock ingredients of pounding bass, thick guitars and thumping drums, there is a depth to their music and lyrics that keeps you coming back for more. They also totally look the part.”

“I remember picking up the gorgeous 7” vinyl of this song a while ago, in one of the (now shut down) record shops in Brighton, and continue to listen to this perfectly crafted rock-pop record over and over. It reminds me of Deerhoof and elements of Sonic Youth – all wrapped up in what seems to be a song about conservation of the famous black and white bears.”

“To understand this bands style best, look to the words of their uber-fan Stuart Lee who recently wrote this review of their new album: “a super-dense sci-fi mindfuck of a thing, music scholarship charity case keyboards in combat with squally spacerock guitars, dub boom bass and multi-time-sig clatter; a territory staked out over mushrooms at break-time””

“This illusive band have long been ploughing their mind bending musical furrows in Brighton, and are part of the ever eclectic stable at the arts collective, Beatabet. Andy Sowerby directed this video, he’s also done the business for some of ours too. This track sees the band channelling relentless, bass and drum heavy, afro-beat rhythms over which they paint shifting and haunting colours using delay soaked vocals and guitars. There is talk of an album coming out in the near future, but don’t be surprised if they keep us waiting for a while yet.”

“This is the newest entry on this list and comes with recent recommendations from the likes of Annie Mac and Edith Bowman. This duo is an intriguing mixture of synth-pop sensibilities but with a strong underlying current of experimental noise and electronica. Sweeping, ghostly vocals mingle with glitchy beats and bass lines to make this alluring soundscape – expect more new material from them very soon.”

“This band are sort of like an establishment in Brighton and are certainly one of the most established acts on the list. This video and the track it accompanies are a perfect example of the sort of kosmiche-style motorik beats and riffs that make the band what they are.”

“Probably lots of people know about this guitar and drum duo already, but it’s only right they find their way onto the list as they have made themselves an indelible part of Brighton’s bands history. These two musicians are part of the fabric of the town’s musical make-up and one or both of them can often be found down at the ever-popular rehearsal and recording studios, Brighton Electric.

“TRAAMS will blow your face off live. Totally mind-numbingly loud bass and drums are countered by the unusual and distinct vocal sound and melodies. Just the right blend of heavy sludge and urgency, like a mixture of Black Sabbath and Gang of Four, that gives this three-piece their powerful, unique sound.”

You can catch AK/DK across the UK over the next few months, performing as part of a multi-discipline theatre show called ‘Margate Dreamland’.

You can listen to all Ask the DJ playlists on the FMS Magazine Spotify channel. Find AK/DK’s playlist HERE. 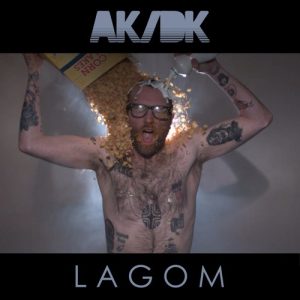