Having recently returned from their SXSW shows in Austin, South London’s Happyness follow up the success of their debut album with their sophomore release, Write In. After the post-grunge, slacker rock aesthetic which dominated Weird Little Birthday, Write In has the feel of a more mature record, informed by a broader range of pop and rock influences. It is also more focussed on song creation, with the likes of Roxy Music and Randy Newman credited with impacting the band during the recording of this album.

Outward looking, inventive and deeply English in its perspective there is still a marked American influence in its college rock sound. However, Write In is a fuller, more rounded record than its predecessor. It is a hazy, understated yet charming record, right from the hypnotic opener and single ‘Falling Down’. That track (and much of the record) is driven by melodic riffs and lead singer Jon EE’s purring, almost whispered vocals, before the production opens up and strings are added to a more expansive mix than previously seen in much of their work.

‘The Reel Starts Again’ and ‘Through Windows’ are piano led and the former in particular has vocal tendencies and mixes reminiscent of The Beatles, and that ’60s rock influence is clear throughout the record, with the band having previously discussed how they opened their mind to this sound, and particularly to The Kinks. These tracks are also marked by their very matter of fact lyricism and storytelling, much like their debut but with a step away from some of the more abstract lines of that record, and rooted in real experiences, particularly on ‘Victor Lazzaro’s Heart’

On ‘Anytime’, ‘Anna Lisa Calls’ and ‘Bigger Glass Less Full’ a fuzzy alt rock sound is still very prominent, recalling the dense wall of sound that Happyness made their name with. However, even these moments move with a swell and melancholy evoking the Beach Boys and this record has even more dream pop tendencies than its predecessor. As a result ‘Falling Down’ is arguably the most immediate track of the album, but many of the others lack the instant impact of ‘Naked Patients’ and ‘Anything I Do Is All Right’ from Weird Little Birthday. Instead, the listener is encouraged to be swept along with the tracks and there is even space for some Americana twang om ‘Uptrend Style Raids’ which meanders through its near 7 minute running time. Extended running times are something the band has never been afraid of across all of their previous releases, despite the modern tendency towards the three minute track.

Write In was recorded and self produced by Jon EE alongside fellow band members Ash Cooper and Benji Compston in the same Jelly Boy Studios as their debut, a studio which had previously sat above a bookshop and has now been reduced to rubble. The record was subsequently mixed by Adam Lasus at his LA home studio and Write In has a reassuring warmth to its mix and production throughout.

Write In therefore marks a gradual evolution for Happyness, as they embrace wider influences and a fuller sound across the album’s ten tracks. The reserved, laid back sound of the record is unlikely to ever truly astound but it is easy to be swept along in the melancholic swell and it is refreshing to see a band not afraid to develop and challenge their own ideas and sound. ‘Tunnel Vision On Your Part’ closes the record and provides the perfect summary of what has come before; heartfelt and touching, a beautifully produced alt pop track, allowing space for the mix of fuzz, acoustic balladeering and twinkling keys to come through alongside Jon EE’s affecting vocals.

Write In is set to be released on Moshi Moshi Records on 7 April 2017 and they then go on a European and North American tour, starting in April and finishing in June.

The album is available to pre-oder HERE and tour tickets are available HERE. 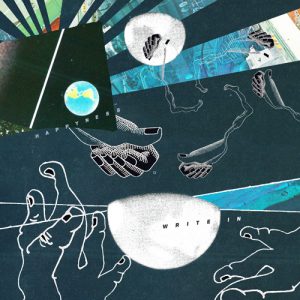