Chloë Black recently followed up her melodramatic and soulful singles, ’27 Club’ and “Wild At Heat’, with the wonderfully grungy ‘Waterbed’ (listen HERE). “I grew up partly in Seattle during the nineties and because of that grunge has a big place in my heart,” says Black, nicknamed ‘The White Witch’.

“’Waterbed’ is symptomatic of my nineties nostalgia but shot through a 2017 lens. I don’t want to say too much about it because I prefer when people are able to interpret things their own way; but I will say that to me the song is more than just literal.” On that note, check out her top 10 songs of the nineties.

“This song has always resonated with me for some reason. I used to listen to it on repeat. I love the Rhodes/roads thing and it was featured in one of my favourite cult movies, Tank Girl.

“I picked this song of Bjork’s because it’s lesser known and really shows off her incredible voice. She sort of screams and sings perfectly in tune. The breaks in her voice are so beautiful and raw. The only other person I’ve really heard do this is Sia. I love the dramatic string arrangement too. This was also featured on a soundtrack although I’ve still yet to see the film (The Young Americans).”

“It’s hard to pick a favourite Nirvana song. Of course, I love ‘Heart Shaped Box’ and ‘All Apologies’… basically their whole catalogue… I chose this one because it was one of the first songs I ever learnt to play on guitar and it has a kind of fascinating story behind it (included below) which is sadly as relevant as ever. I like to think that even though this song is sung from the perspective of the perpetrator, that Kurt was in his own way trying to shed light on violence against women.”

“Kurt Cobain wrote this song in response to something he read in the newspaper in June 1987. A 14-year-old girl went missing after going to a rock concert. She had accepted a ride home from a 49-year-old man called Gerald Friend. Instead of getting the girl home safe, Gerald Friend repeatedly raped and tortured her. Fortunately, the girl could escape by jumping from his truck when they stopped at a gas station. Gerald Friend was stopped by the police a couple of days later for a traffic violation. The deputies recognized him and Friend was arrested. In August 1987, about 30 years ago, Gerald Friend was convicted of first-degree kidnapping and rape. Many deputies still can’t believe why Gerald Friend was a free man at the time. He had been convicted of rape and torture in 1960 and was sentenced to 75 years in prison. However, after serving 20 years and escaping twice, he got out on parole.”

“I wouldn’t be who I am without Fiona Apple. She was the single greatest influence on me growing up. Playing the piano was seen as really naff and I remember begging my parents to get me guitar lessons and let me quit the piano because everybody cool played guitar. That was until I was introduced to Fiona. Then I sat back down at the piano, began writing and never looked back.

“The opening line of this song is so sophisticated and gut wrenching. I can’t believe she was only 19! ‘So be it I’m your crowbar…if that’s what I am so far…until you get out of this mess’.”

“The nineties was such a time of collective angst. This song embodies that teen angst in a way that’s so cheesy it’s almost comical…but I can’t help but love it. It’s got such a sexy opening too… ‘The world is a vampire…’”

“I had pictures of Courtney Love all over my notebooks in school. I never really understood why she was vilified for doing exactly the same things as her male counterparts. She’s such a rock star and this song was my favourite because it showed a rare moment of vulnerability.”

“It’s hard to choose one Nine Inch Nails song because they have such a huge catalogue. I loved ‘Pretty Hate Machine’ and ‘Downward Spiral’ too but I particularly loved some of the prettier moments on The Fragile like ‘La Mer’ and ‘The Great Below’. I think the album was kind of hated by a lot of critics and fans but I think it’s a masterpiece.”

“Once again…picking just one Radiohead song is pretty difficult…I always loved the beauty, sadness and simplicity of this one. The empty spaces in it are heart-breaking.”

“Mechanical Animals was sort of seen as the worst Manson album for a time but it’s actually brilliant and I love how glam he was during this era. Sure, it’s a total appropriation of Bowie, but it was sexy, and it really upset a lot of people in white middle America which gets it bonus points in my book. I love nothing more than boys in make-up and a good mantra… ‘I don’t like the drugs but the drugs like me.’ Amen.”

“Being introduced to Tori Amos marked another turning point for me and further cemented my desire to be a singer songwriter. This song really shows off her incredible and effortless piano playing. I love how different this sounds to the original and how she takes Kurt’s rage and turns it into something sorrowful. It’s the most nineties song of all time. A nineties cover of a nineties hit.”

‘Waterbed’ is out now. 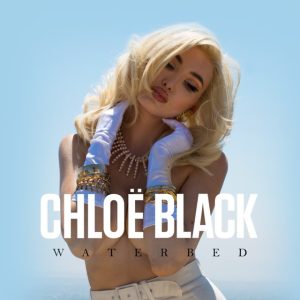