San Francisco’s No Vacation released their latest EP, Intermission, earlier this month; an inspired and motivated record from a band which has already experienced its fair share of highs and lows, since emerging as a dorm room duo in 2015.

Their first proper release, Amo XO, provided an almost whimsical introduction, soundtracking the day to day reality of college life and young relationships. It moved from warm, atmospheric instrumentals to acoustic songcraft. The likes of ‘Beach Bummer’ felt like the moody indie of The XX if Romy and co had been raised by the beaches of America’s west coast, rather than a rainy and grey London skyline as Sab Mai and original member Basil Saleh’s vocals played off against each other. Intermission provides a musically more cohesive statement from the band, blending nostalgia drenched indie rock riffs, dream pop melodies and memorable hooks to captivating effect. Lyrically, the tracks revolve around romance and break ups, but these ideas are underpinned by a deeper experience that is merely hinted at.

The band has had a relatively tumultuous history in its short life, with a handful of line up changes since Amo XO was released and, more significantly, a break up last year, although thankfully this was short lived. This EP is informed by the time that the band was on its haitus, with lead single ‘Mind Fields’ an ode to breakups and inspired by their own as a group (with a fantastic accompanying video). It provides both the depth of emotion that comes with the break-up of any relationship and the sense of happiness and creative inspiration that results from reuniting. The sweet melodies of ‘Yam Yam’ in particular express the relief felt by the band at making music together again.

Reuniting also brought about signing with Topshelf Records, something they had avoided previously as they didn’t feel ready to commit to a label. The No Vacation that has emerged with Intermission feels refreshed, focused and ready to take a college band to the next level and stake their place in the indie rock landscape. With tracks so musically rich as ‘Your’e Not With Me’, as it swells with delicate riffs and warm synths, and the emotional range displayed on ‘Reaper’ expectations will only continue to grow.

Intermission is out now via Topshelf Records and due for release on vinyl and cassette on 15th December. Pre order HERE. 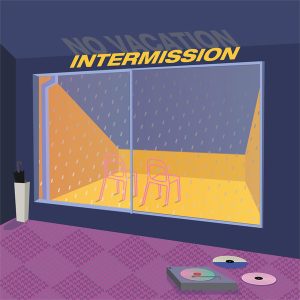