Ask the DJ: Marnie – 10 Tracks/Themes from Films That I Have Fallen In Love With

Ladytron’s Marnie released her second solo album, Strange Words And Weird Wars, via Disco Pinata earlier this year. The follow-up to 2013’s Crystal World sees Marnie continue to develop her very own take on a truly modern pop sound, featuring a synth-heavy take on the ice and steel of electro-pop but with a heartbeat all of its own.

Check out the top 10 tracks/themes from films that she has fallen in love with.

“Under The Skin is one of my favourite films. I know it divided a lot of people, but for me it is pretty much perfection. The dark, edgy, skin-crawling inducing nature of the music enhances what is a weird, horrible, yet beautiful film that encapsulates the good and bad of human beings. Also, it was filmed in Glasgow and on the north east coast where I spent much of my childhood.”

2. Shigeru Umebayashi – ‘Yumeji’s Theme’ | In the Mood For Love

“Wong Kar-wai has a way of making everything look beautiful, and Shigeru Umebayashi’s accompanying soundtrack amplifies that aesthetic. Everything about the film and music is seductive and emotional, and you can’t help but be dragged into it. This film was my first foray into Chinese cinema, and Umebayashi also composed for another brilliant film House Of Flying Daggers. It was hard to pick just one theme.”

“It might not be the best film on the planet, but it didn’t need to be because Ewan McGregor and Cameron Diaz together were enough. They just gel. Plus, they dance and sing and that never happens in modern films that aren’t musicals. Danny Boyle knows good soundtracks and the way they stop and start the track is brilliant.”

“This track would spawn a million indie synth bands to life, but not many would compare to this. It was luck, and very, very good timing. Very little is actually said in this film, so it’s the soundtrack that really takes over.”

“I always remember this scene when I think of the film. It really showcases the power of opera in a non-classical environment, but also showcases Maria Callas’s powerhouse of a voice. The scene and the music is raw and Oscar-worthy.”

“It’s a classic horror movie with the perfect synth score. The vivid colours and music are what make this film. I was lucky enough to see Claudio Simonetti from Goblin perform the entire score along to the film in a small venue in Glasgow in 2014.”

“I think this was a film for a generation. One of those films that comes along and just evokes so much feeling among you and your peers. ‘The Killing Moon’ as opening scene was pure genius. Big and bold and memorable.”

“No one can forget the glorious sing along to ‘Tiny Dancer’ in this film. It’s one of the most joyful moments in film, and for that reason I had to choose it. People often forget how bloody amazing a singer and songwriter Elton John was. They only see where he is now – post Diana’s ‘Candle In The Wind’. I discovered Elton John when I was about 15, going through the CDs of a parent whose kids I was babysitting.”

“I’m not big on war films. I generally find them hard to watch. I did, however, appreciate Oliver Stone’s Platoon, and Barber’s ‘Adagio’ perfectly portrays the horror of war. The piercing strings and their gradual crescendo imitate the escalation of war in the scene.”

“OK, this is definitely NOT a film, though I wish it had been. This was a TV series that aired for one season when I was about 15 and was the epitome of teenage angst. Every teenage girl could relate to it. I remember watching this episode, knowing nothing about Buffalo Tom, but falling in love with them at that very moment.”

Strange Words And Weird Wars is out now. 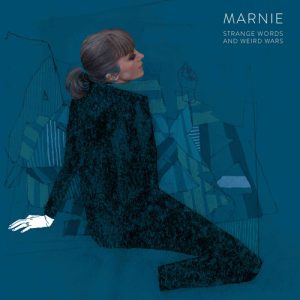