With his trademark orange hat and heavy stubble, Snorri Helgason is currently one of Iceland’s most prominent singer-songwriters, having released five albums in both English and Icelandic since leaving his band, Sprengjuhöllin, in 2009 to embark on a solo career. His most recent acoustic folk album, Margt Býr Í Þokunni, was released at the end of 2017, telling tales of the outlaws and hidden people of Icelandic folklore.

In the midst of 2017’s Iceland Airwaves festival, FMS chatted to Snorri over a coffee in the laid-back artisan Stofan café in central Reykjavík, discussing his recent work, the creative culture of Iceland and his plans for the future.

Airwaves 2017 was the twelfth time playing in a row for the 33-year old, who feels the festival has grown and changed a lot during that time. “It makes us focus more,” he says, “because people from the international community who can make a difference come here at that point. It’s like Christmas – tidy your house and put on your fancy dress.”

It’s a common focus for Icelandic musicians: Airwaves is the time each year for local artists to get noticed. That was certainly apparent during Snorri’s cosy set at Dillon, a small upstairs bar that was packed with a variety of nationalities sheltering from a north Atlantic storm that was blowing down the street below. Snorri played a relaxed but polished collection of songs from his growing repertoire, accompanied superbly by Örn Eldjárn on guitar and Guðmundur Óskar on bass.

Having started his solo career in 2009 following the demise of his first band, Sprengjuhöllin, Snorri feels that the experiences of being in a band of ‘five opinionated guys’ are very different from those of being solo and, latterly, working with his own band. “I learned a lot with the band. But now, it’s always centred around my own songs.”

Over the last year, Snorri has been busy touring in Poland, where he feels his acoustic folk music is well-received – possibly better-received in live venues than in London, where he used to live. “It works well in Poland: people just shut up and listen!”

Although Margt Býr Í Þokunni is very much an acoustic folk album, it is beautifully eclectic, with opening track ‘Reynirinn’ concentrating on the purity of guitar and vocals, while the excellent Americana-sounding ‘Egilsstaðablá’ and more country-driven ‘Álfadans’ demonstrate a richer, more upbeat sound. The delightfully- smooth ‘Selurinn’ features superb lead vocals from fellow Icelandic singer, Lay Low, while ‘Bjarna-Dísa’ is almost religiously choral.

Interestingly, Margt Býr Í Þokunni features artwork for each of the album’s ten tracks, providing a creative visual accompaniment to what is a very well-put-together record.

Aside from the new album, Snorri has more music in the pipeline, which is being made with his band and will be separate from the folk style he is concentrating on for his solo projects. However, time is quite a significant constraint at the moment: “Everyone in my band is in about ten other bands, so it’s difficult to find time to organise shows and even more difficult to work on new music.”

Indeed, one of the members of Snorri’s band is Valdimar, who also fronts his own eponymous band in Iceland and who joined Snorri for the interview.

In recent times, there have been a number of musicians leaving Iceland (albeit temporarily) to pursue more creative songwriting opportunities, while some artists, such as the acclaimed Irish singer-songwriter Damien Rice, have travelled the opposite way, seeking inspiration in the Nordic wilderness.

“I moved to London to be creative,” says Snorri, who lived in the capital until 2013 and released his debut solo album, I’m Gonna Put Your Name On My Door and Winter Sun, while he was there.

“The best quality about the Icelandic music scene is also its worst quality: everyone is just one phone call away. You can call anybody and ask them for a favour. It becomes suffocating; it’s a little bubble. It’s good to go out and do your own thing, as it can be a little echo chamber here. It can get a little too easy making things happen. In London, nobody knew who I was.”

Valdimar concurs with this view, citing the ‘hunger of achievement’ for Icelandic musicians who are looking to progress. “If you’ve done it here, you don’t have anything else to prove.” For musicians who perform extensively, such as Snorri and Valdimar, it’s clear that new audiences become harder and harder to come by in a country of just 330,000 people.

“Imagine how many guys there are with guitars here in Iceland,” adds Snorri. “About thirty? In London, it’s about a million. You need to get in shape and challenge yourself if you want to get recognised, especially in live performances.”

Warm, softly-spoken and grounded, Snorri appears to have benefited from his time in London; bringing new ideas back home with him and with a strong drive to continue to create more music with his network of fellow musicians.

Looking to the immediate future, however, there’s the small issue of becoming a dad for the first time in February 2018. “Things might change following that,” he chuckles, “but I’ve made my kid a new album.” 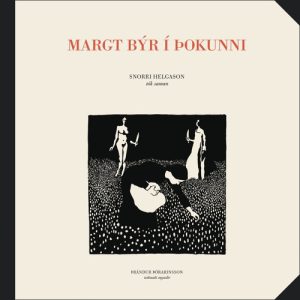