After twenty years touring the globe as one third of one of the most successful electronic acts in the world, Maxi Jazz, Buddhist rapper and frontman of Faithless, has formed a guitar band with some of his favourite musicians. Now, Maxi Jazz & The E-Type Boys are set to release album debut, Simple… Not Easy, via Man In The Moon Records on September 30th.

Faithless hit the airwaves in 1994 with killer singles, ‘Salva Mea’, ‘Insomina’ and ‘Reverence’; have sold over 15 million records worldwide to date, and been dubbed responsible for the creation of a whole new sonic landscape for Dance Music; the first to mix dance, hip-hop, blues, folk and classical music. In 2013, on a hiatus from Faithless and with no plan or agenda, Maxi got back into the studio, armed with nothing but a guitar and his notebook, and began to write. Influenced by everything from Todd Rundgren to Sly Stone, from James Brown to JJ Cale, from Jimi Hendrix to Parliament as well, of course as the ‘Golden Age’ of Reggae, a new sound emerged – incorporating melodic funk and blues mixed with reggae beats, dub baselines, Jamaican melodies, and smooth insightful, penetrating lyrics; distinguishing more than ever his great love of the human spirit.

Ahead of the new release, Maxi took some time out to pen the top ten tracks that have inspired him over the years.

Not just tracks, but moments of musical genius.

“The first time I heard ‘Hey Joe’ I was sitting in my bedroom; I remember it clearly. ‘Hey Joe’ came on and I was fucking transfixed. I was bolt upright. My skin started to tingle. And that tune builds, in the most incredible way. Not just in the way that Jimi’s singing and playing, because he’s putting more into it with each verse, but there’s these incredible backing vocals. And the tune is building and building. And here I am, 10 or 11 years old, and here’s a man singing about having just shot his woman. I’d never heard anything like it in my life, anything close. I still haven’t heard anything like it. It changed my world. A lot of what I’d been listening to before, I couldn’t listen to anymore. Because the benchmark had been set.”

“Again, never heard anything like it, before or since. There will never be a guitar riff written anything like as good. It’s the guitar riff of them all. I remember I was walking my dog, with my radio – I never went anywhere without my radio. This one I must’ve been about 11 or 12. My radio came everywhere with me because I didn’t want to miss out on any music. At that time he definitely was my favourite artist. And then the DJ starts to play ‘a brand new track by Jimi Hendrix’ and it starts. And my dog is about 50 yards away, doing dog things. And I have to sit down on somebody’s front wall, because I can’t move anymore. I’m staring at my radio. I was just blown to bits, right? I’m just somewhere else. It was on Nutfield Road. And before you knew it, my dog was sat next to me, realised that something was up, and was just staring up at me like ‘are you alright?’ My head was blown to bits.”

“Now, there’s my favourite artist right there. I first heard the single when it came out in the early ’70s, and I just thought, ‘that’s the best fucking thing I’ve ever heard’. It’s such a lovely song. When I bought that album I was 16. It was off an album called Something/Anything?. It was a double album, and for the first three sides Todd played every instrument. Of course wrote every song. Arranged it, produced it, did the whole fucking thing. The fourth side, he got his mates into the studio, and they played on four or five of his songs. First take. They were just chatting away, and jamming. And it was like ‘an afternoon in Todd’s house’.

This album really did change my world. I didn’t listen to another thing for nine whole months. Because I knew he’d done it all on his own. It made me listen to every single aspect of this record. From the guitars, to the backing vocals, to the little studio noises that he managed to create, to the jiggery-pokery. He’s an absolute fucking genius. It’s fair to say, I didn’t listen to that album, I studied it.”

“I’ve never heard a record with more energy on it. Because I’ve seen bands with loads of energy, but it’s so hard to capture it on record. If you don’t feel good after 10 seconds of listening to this tune, something’s seriously wrong here.”

“Well, Jesus Christ, what’s to be said about this tune? I must have about 30 James Brown albums. He’s one of my absolute heroes. I think he’s a stone-cold genius. And he changed the course of modern music, pretty much on his own, in my view. In terms of black music, and the way it was going in America. I mean, the Ohio players were a jazz band, and they became one of the funkiest, soulful bands that ever existed, and that’s all down to James. I don’t know what he had in him, but I’m really glad I was on the planet at the same time he was, because that was some shit.

The first time I heard sex machine, I was in my house. My mate came round and he played it, and I didn’t realise music could be that hypnotic. It sends you somewhere that you maybe haven’t been before.”

“When my mum came back from New York in ’68, when I was 11, she brought this Otis Redding record with her, and well, I wore it out. When I left home I took it with me. She missed the record, but I’m her son, and I can pretty much do what I want. She knew I was a DJ and that I wanted it for my work, and she said, ‘OK son, that’s fine’.

So, ‘Hard To Handle’, the piano riff, the horns, Otis’ vocal is funky BAD. When I first heard that I was like ‘oh my goodness’, and I played it over and over and over again. And I still do.

I sampled it myself, when I was making hip-hop – on a track that hasn’t come out yet, but I might bring it out at some point in the quite near future.”

“It’s the same with all great reggae music – I’m not sure how that works, but you hear the rhythm, and this rhythm resonates in your body somehow, and you lose your mind. ‘Prophet Rides Again’ and my next choice ‘Worries In The Dance’ have these rhythms – rhythms that will help you to lose your mind.”

8. Frankie Paul – ‘Worries In The Dance’

“When I first heard the Frankie Paul rhythm I was listening to David Rodigan – one of the greatest, if not THE greatest reggae DJ that ever lived. He’s somebody who I am extremely grateful for, because he helped me with my education on reggae music, because my parents didn’t play much reggae in the house. So I relied on Roddy, and he never let me down. And I remember he started his show, and he could barely speak he was so excited, and he put [the record] on, and it was the wrong fucking side. And he turned it over, and stuck it back on, and out came this bassline, and I was like ‘oh Jesus, no wonder he was so excited’. It has the heaviest bassline you can imagine. And he’s talking about difficult times in Jamaica. Absolutely incredible record.”

“So, this is another one that the hip-hop guys sampled the hell out of. It’s got one of the most recognisable riffs ever, and there’s a beautiful vocal bit that everybody has used. It’s so funky; you have to listen to this record. It’s just a perfect record. It’s like champagne or jelly, there’s never a wrong time.”

“I remember exactly where I was when I heard this – I was at a Soul II Soul night. And I was with my new girlfriend. And they were playing such great music. Then this track came on, and I was like ‘oh shit’. I had to look around me, and look at the floor, to make sure everything was still in place, and there wasn’t an earthquake going on. So the drums come in, and you’re thinking ‘Jesus, that’s funky’, and now you’re nodding your head and starting to move, and then the bass comes in, and it’s distorted and overdriven and it’s too fucking loud. And it sounds amazing, especially on a big system – I thought the walls were coming in. The first line is ‘Feel like a king’, and I just thought, ‘This is the sexiest record I have ever heard’. I mean I can dance with myself to ‘Sex Machine’, but when ‘Just Kissed My Baby’ comes on, you start looking around for somebody to dance with.”

New LP ‘Simple.. Not Easy’ is out on September 30 via Man In The Moon Records. First single, ‘Bitter Love‘, is out now. 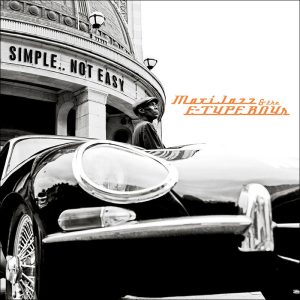