Having released their sophomore album, Touch, on 9 September, July Talk descended on Tuffnell Park for a commanding performance, filled with glorious riffs, boundless energy and a playfulness that has come to define the July Talk experience.

The first thing that anyone new to July Talk will notice is the vocal interplay between Peter Dreimanis and Leah Fay. Dreimanis possesses a growl that brings to mind Tom Waits, and Fay a soprano that is a soft and sultry. They are both polar opposites and perfect bedfellows and their chemistry and playful relationship is central to both the recorded material and live performances. In BMR it was best demonstrated on new songs ‘Beck + Call’ and ‘Lola + Joseph’. Despite Fay and Dreimanis being the clear focal point of the night, the importance of Ian Docherty (guitar), Josh Warburton (bass) and Danny Miles (drums) should not be underestimated, as their tight musicianship provided the perfect platform for the theatrics in front of them.

Touch sees the band bring the visceral energy of their live performances to record. As guitarist and singer, Dreimanis explains, “There’s a danceability but there’s also this darkness. The songs all had to contain a certain amount of darkness while still moving your muscles uncontrollably.” Lead single ‘Push + Pull’ is a prime example of this dynamic, and sounded fantastic live. It also spent 12 weeks atop the Canadian alternative chart, as the band continue to develop a strong following in North America. This following seems to be spreading across the Atlantic, as the assembled crowd sang lyrics back to the band word for word, leaving the band visibly humbled.

The album also focusses on Western excess and our never ending appetite for more, highlighting the importance of human connection in an increasingly virtual world. In doing so, the band have built on their self-titled debut with an increasingly creative and open musical outlook. ‘Now I Know’ has synth pop overtones, ‘Touch’ possesses the understated grandeur of Massive Attack, and ‘Strange Habits’ is dark and sombre, built around a haunting keys riff. Performed live, these tracks, and ‘Picturing Love’ in particular, allow Fay the opportunity to position herself as a genuine rock band frontwoman, and not a foil to Dreimanis or anyone else. She is enthralling throughout, whether moving endlessly round the stage, climbing the speakers or dancing around the crowd, with a freedom not seen at larger venues.

The band is capable of switching mood at the drop of the hat, taking the listener with them at all turns. In London the band moved with consummate ease from the stomping ‘Summer Dress’ through the dark ‘Gentleman’ to the heavier blues of ‘Johnny + Mary’, via the slowly building ‘Touch’ (dedicated to the new album’s producer, Ian Davenport) before finishing with the rumbling Americana of ‘The Garden’.

July Talk performed a number of the highlights from their debut album, including ‘Guns + Ammunition’, ‘Blood + Honey’ and ‘Paper Girl’, and these well known tracks drew the best reactions of the night. Touch adds to this repertoire, with ‘Push + Pull’ and ‘Lola + Joseph’ a few of the standouts from the new material. More than establishing themselves as a single’s band however, Touch feels a more complete record than its predecessor, adding a level of consistency to their undeniable ability to write fantastic song. When matched with their brilliant live presence, July Talk are quickly establishing themselves as a band to watch out for on the biggest stages.

July Talk are in the middle of a world tour, with date across North America and Europre, which also sees the band support Nothing But Thieves.

Dates are below and tickets HERE. Touch is available to purchase and stream now. 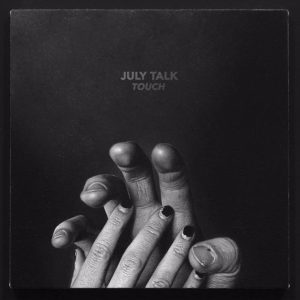