Canada’s Mo Kenney returns to the UK next February, following the release of her latest single, ‘On The Roof‘, taken from third album, The Details.

“I began writing ‘On The Roof’ during a solo tour in the US,” says Kenney. “I had a day off in Syracuse, NY, and wrote the chorus for the song that day. When I sit and think of all the negative things in the world it can get me down, because there’s a lot of it. I go down that wormhole often, as I’m sure a lot of people do. The song is about being in that mindset and not being able to shake it.”

Before and during writing the album, Kenney was enroute to rock bottom: depressed with dark blues and drinking like a fish, unable to hold herself or her relationships together, alienating the people she loves, and living hell-bent on oblivion, “The Details is a fourteen song concept album. The album starts off kind of hopeless and gets progressively more optimistic. This album is the details of coming out the other side.”

As for her playlist for FMS, “This is a list (in no particular order) of some songs I really remember digging as a child. Mostly extremely embarrassing; have mercy.”

“I was a big fan of the Spice Girls as a child/had a crush on them all. This song wasn’t my favourite, but I have a specific memory of weeping in bed to this song because it made me so emotional. Such a beautiful song….”

“I found a Walkman in the cupboard in my kitchen in grade primary as well as a Bryan Adams cassette. I listened to this tape all the time and brought it to school once. I didn’t really understand the music at the time, but I loved this song. Probably wept to it as well.”

“I wasn’t really that into Backstreet Boys when I was a kid, but this song really got me goin’. I think I recall doing a project on it for school.”

“Another song that really got me goin’! One of my earliest memories is dancing like crazy to this song in my living room. I was so wound up I tried to do a backflip off of the coffee table unsuccessfully. I think I was 3 or 4.”

“There were dances every once in a while at the Fire Hall in Rawdon, NS where I grew up. This song was played regularly and was extremely popular amongst us 8-10 year olds. It was definitely one of my favourites. ‘Sucks To Be You’ was deadly too.”

“My mom drove me to elementary school sometimes in the mornings and this song seemed to be on the radio frequently. I loved it. A classmate started singing it one day in class and I was really spooked. I don’t think I realized other kids could listen to the same radio stations as me.”

“In grade 5 our music teacher started letting different students bring in a song to play for the class on Fridays. I had recently purchased Big Shiny Tunes 5 and I thought this song was pretty cool. I brought it in on my Friday and while it played the whole class sat in silence, stewing in a collective angst. Beautiful.”

“Another pick from Big Shiny Tunes 5! I absolutely loved this song. The lyrics really stuck with me, I liked how self-depreciating they are. I’d like to cover it at some point.”

“I was a big fan of Eminem when I was a kid. I first heard this song at my babysitters’ house. My cousin Clifford and I were in the garage and he put this song on. He explained the story to me and it was so dark and angry that I fell in love. We used to go whack trees with an axe when we were bored, and I remember rapping this song during. Just regular kid stuff, you know.”

‘On The Roof’ and The Details are out now. 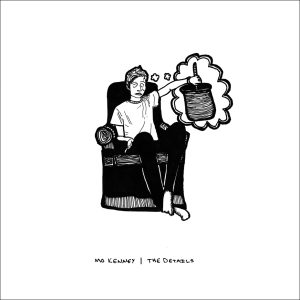