Brighter Wounds marks another fundamental shift for Lott as he leaves universal themes behind to write from a personal perspective: during songwriting he became a father and lost a family member to cancer. Days of ‘firsts’ were also days of ‘lasts,’ and the normal fears of first-time parenthood were compounded by a frightening new reality – Lott’s son was born shortly after Election Day. Brighter Wounds draws on all of that: warm reflections of a fading past, the pain of still-present loss, and a mix of anxiety and hope for a future promised to none.

In the meantime, check out Son Lux’s playlist of songs that evoke ‘paradoxical architecture’… yup.

“We witness the boundlessness of space, fold, collapse, expand and its bandleader leads us into a new time signature.”

“Ornithology rap at its most on-point. We are all flightless birds trying to remember our flight patterns.”

“That moment when human and machine trade currents for breaths.”

“Are there investments we can make, a new deal, into the infrastructure of peace, of connection, of understanding? Let’s replace the roads with rivers.”

“Turn your map upside down.”

“Grit and grime for hair gel and social capital. Prepare for the ice age.”

“MC5 kicked out the jams, Samiyam is all marmalade and fruit preserves.”

“Surrender over your Euclidian predispositions and false hierarchies.”

“Whispers and lightning. Chakras and probiotics. Your body moves. Use it.”

Brighter Wounds is out on February 9th via City Slang. 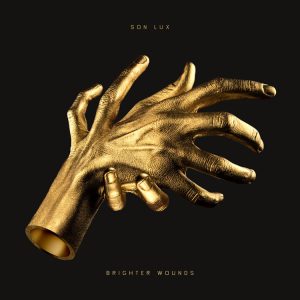