Ask the DJ: Tim Muddiman – Top 10 Soundtrack to the Past, Present and Future

In the run up to their show at London’s Lexington this eve, Muddiman – who has long connections with electronic pioneer, Gary Numan, and as producer and musician for Pop Will Eat Itself – put together his top 10 soundtrack to the past, present and future.

“This playlist has been created as inspiration and by no means reflects replication,” said the man himself, who already has a follow-up album in the works, “There is no stopping. Get involved.”

“’Inside a broken clock. Splashing the wine with all the Raindogs. Taxi, we’d rather walk. Huddle a doorway with the Raindogs. For I am a Raindog too.’ Best opening line ever.”

“Rework of ‘Staggor Lee’ or ‘StagoLee’. Story of Lee Shelton written around 1895. This is Nick Cave’s version.”

“A beautiful cover of one of Peter Gabriel’s finest songs.”

“Featuring John Lee Hooker. I love the original written by John Lee, but this has something extra.”

“Another cover but the bass and the vocal performance on this are sublime.”

“Musical vitality and swing at its best.”

“No rules. Just the blues.”

“This song for the world’s best goose bumps moments.”

“This for ripped up rugged and torn energy of life.”

Tim Muddiman and The Strange play The Lexington on September 4th.

Paradise Runs Deeper is out on September 9th and available to buy HERE. 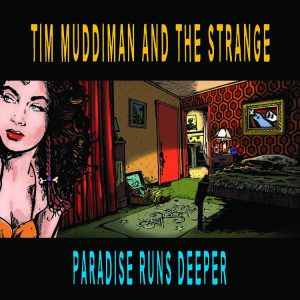