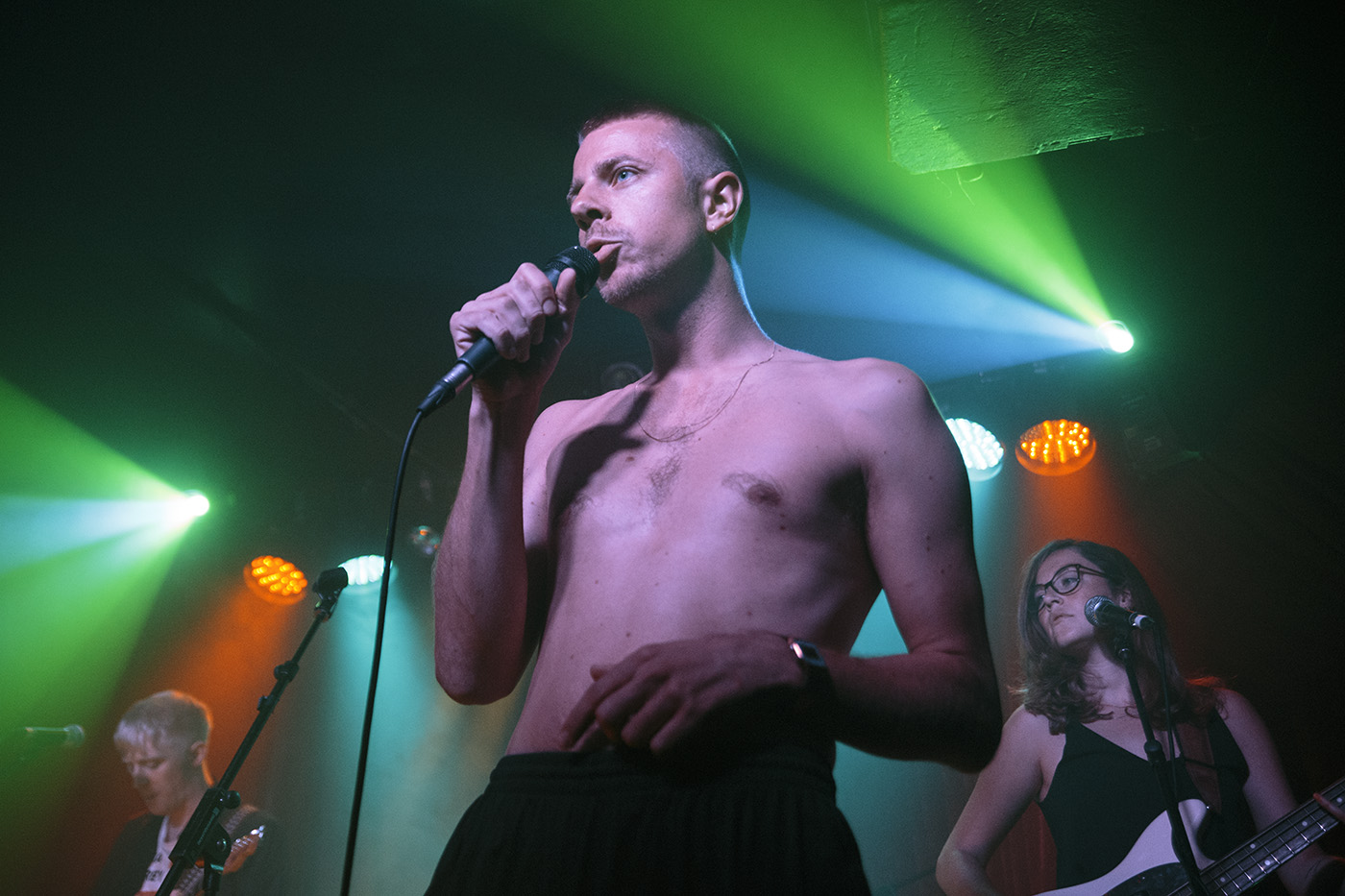 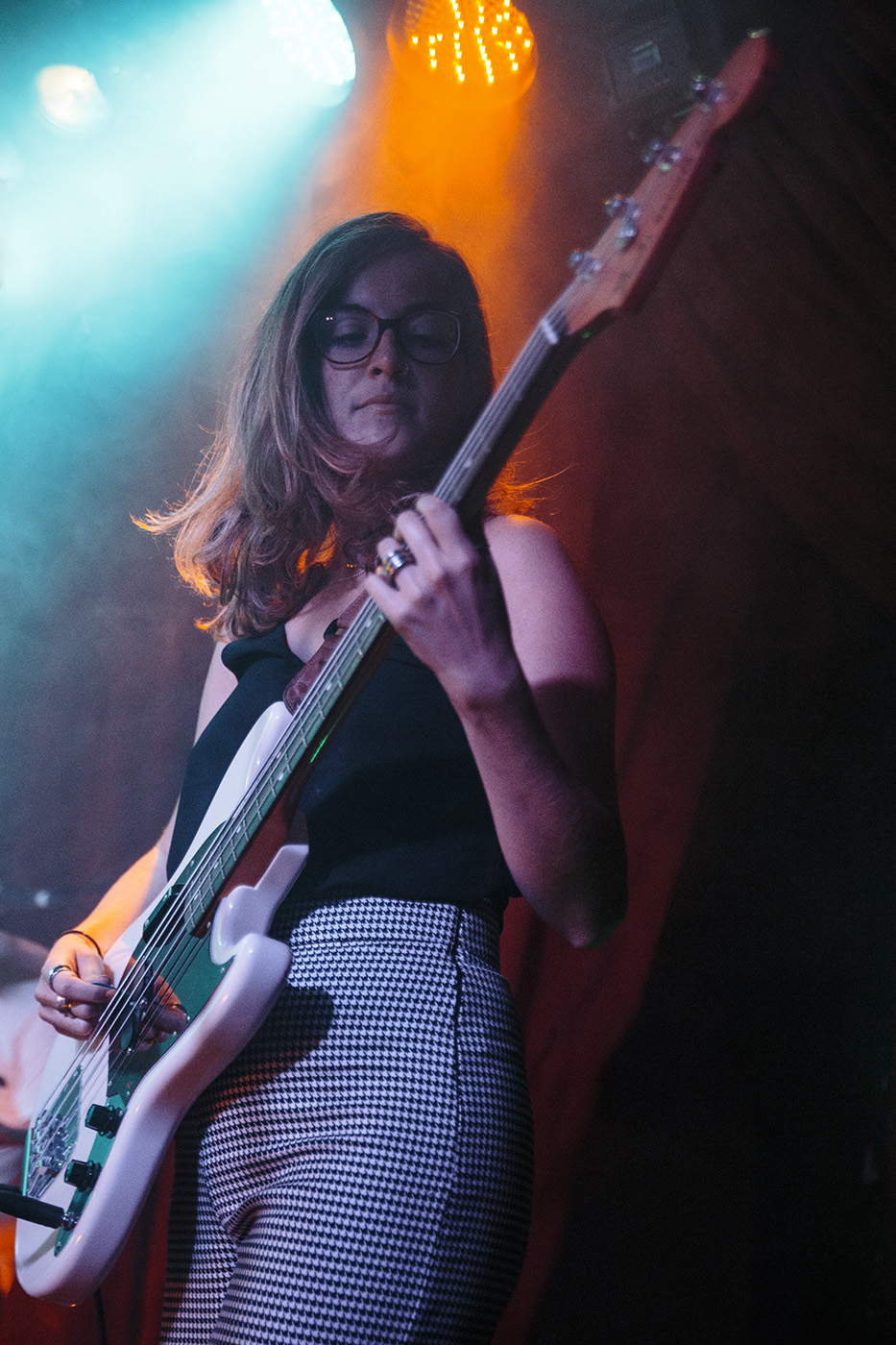 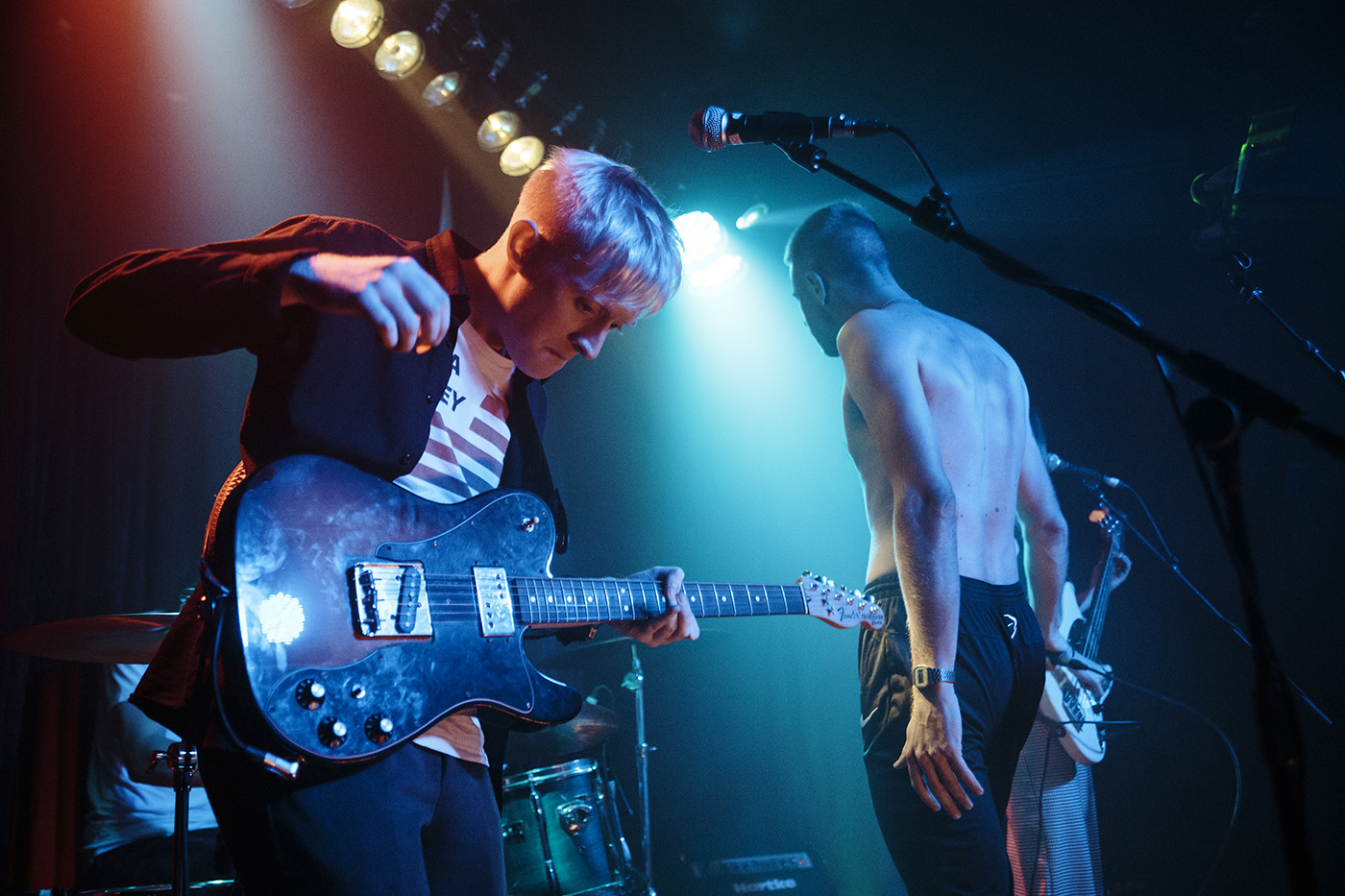 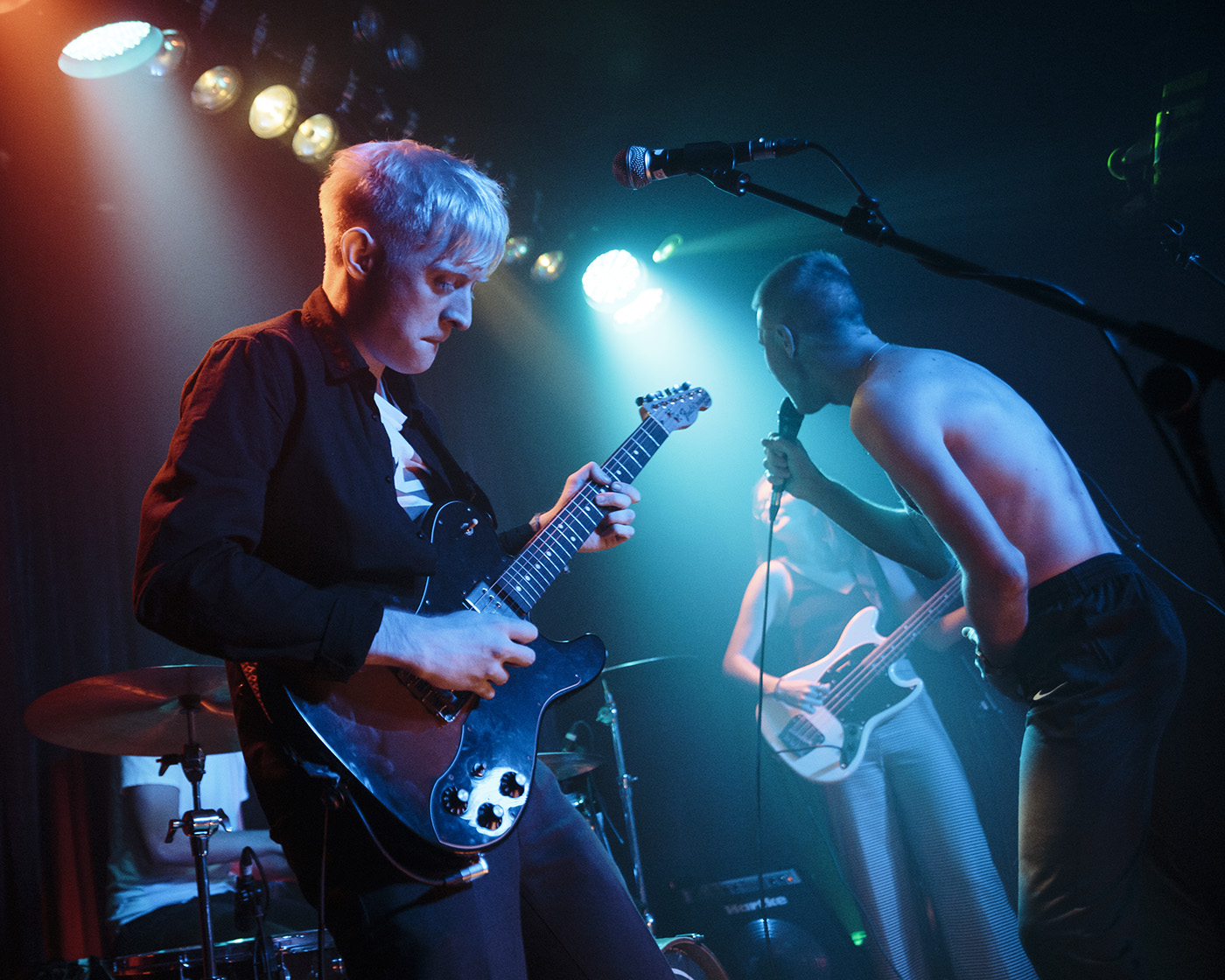 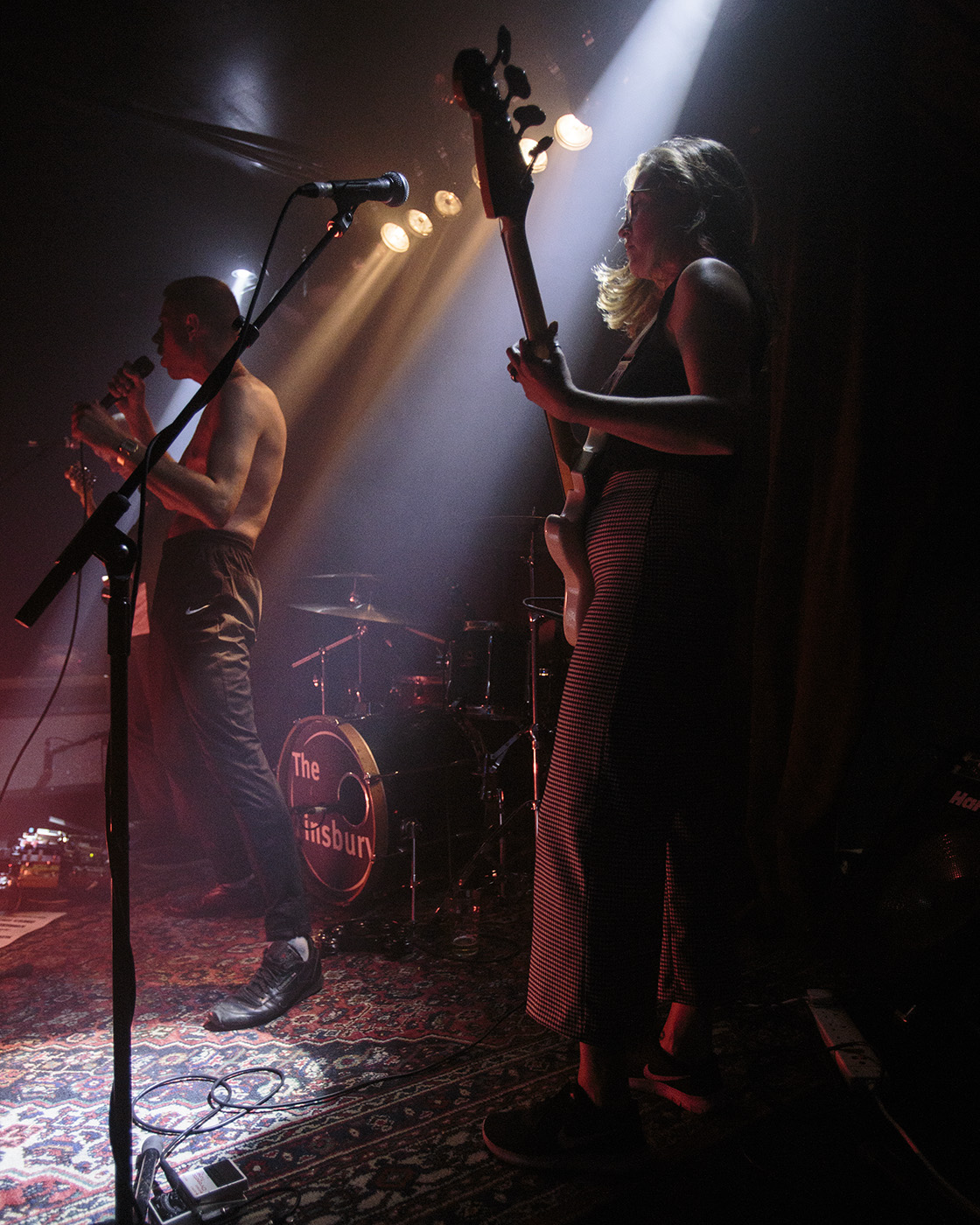 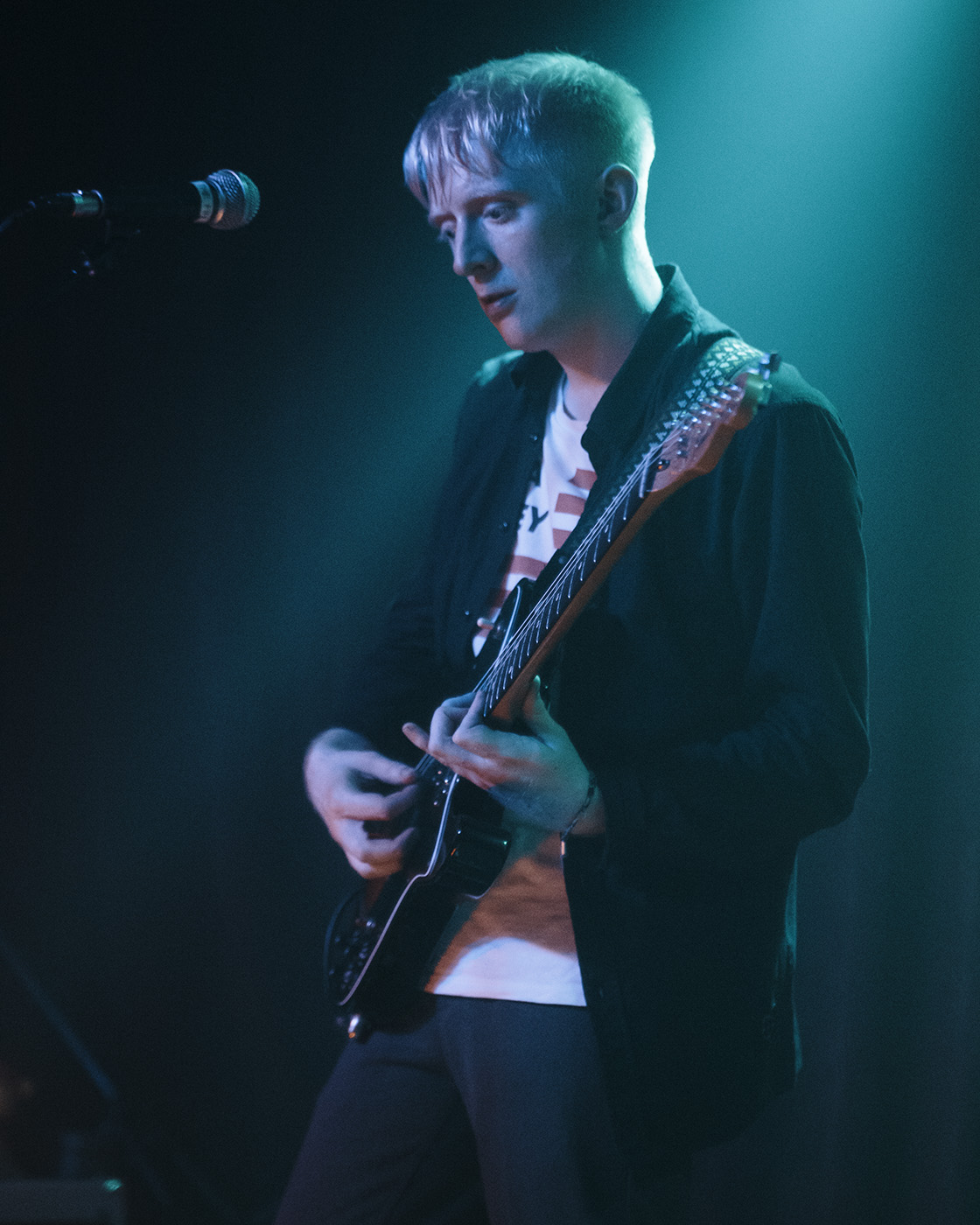 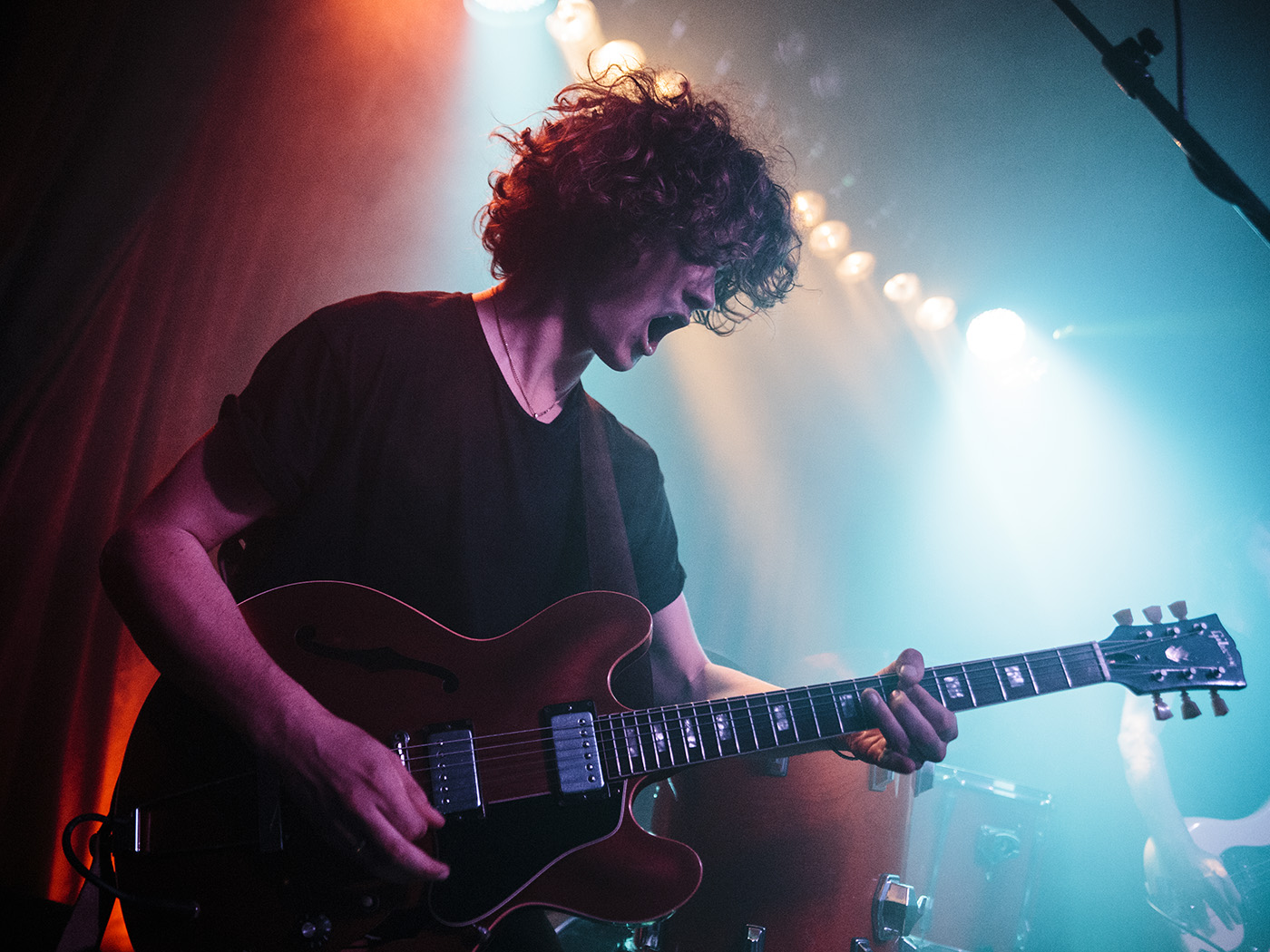 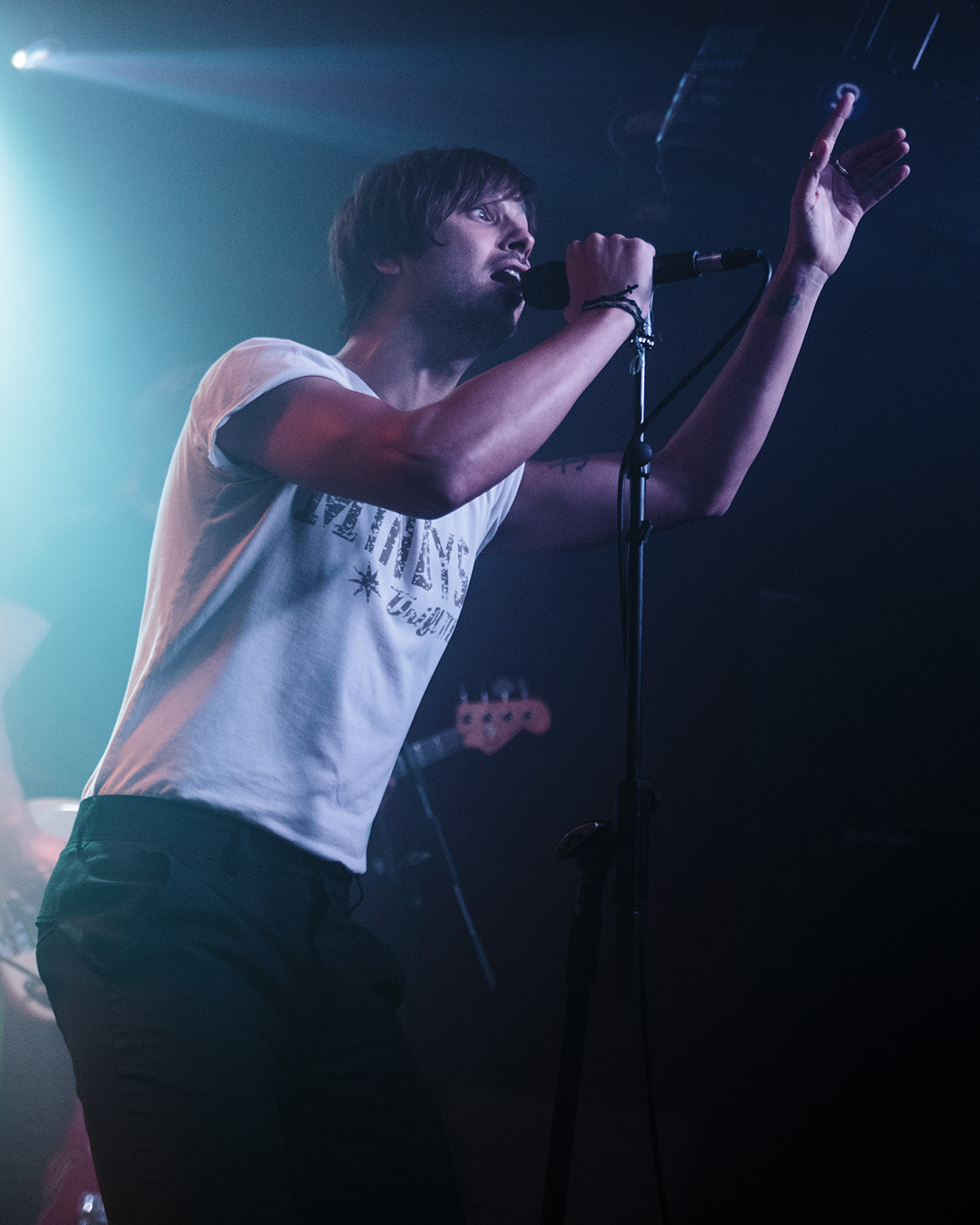 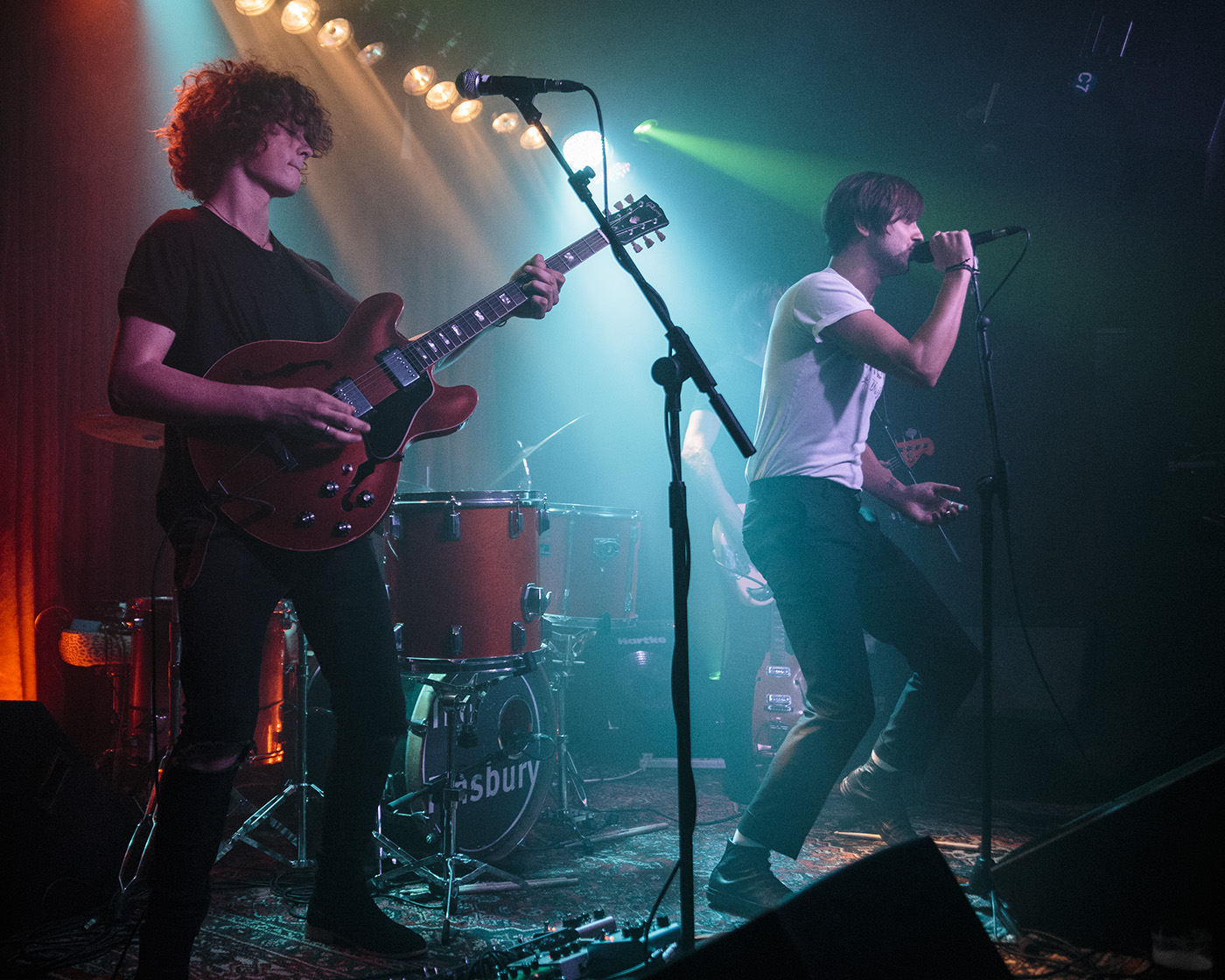 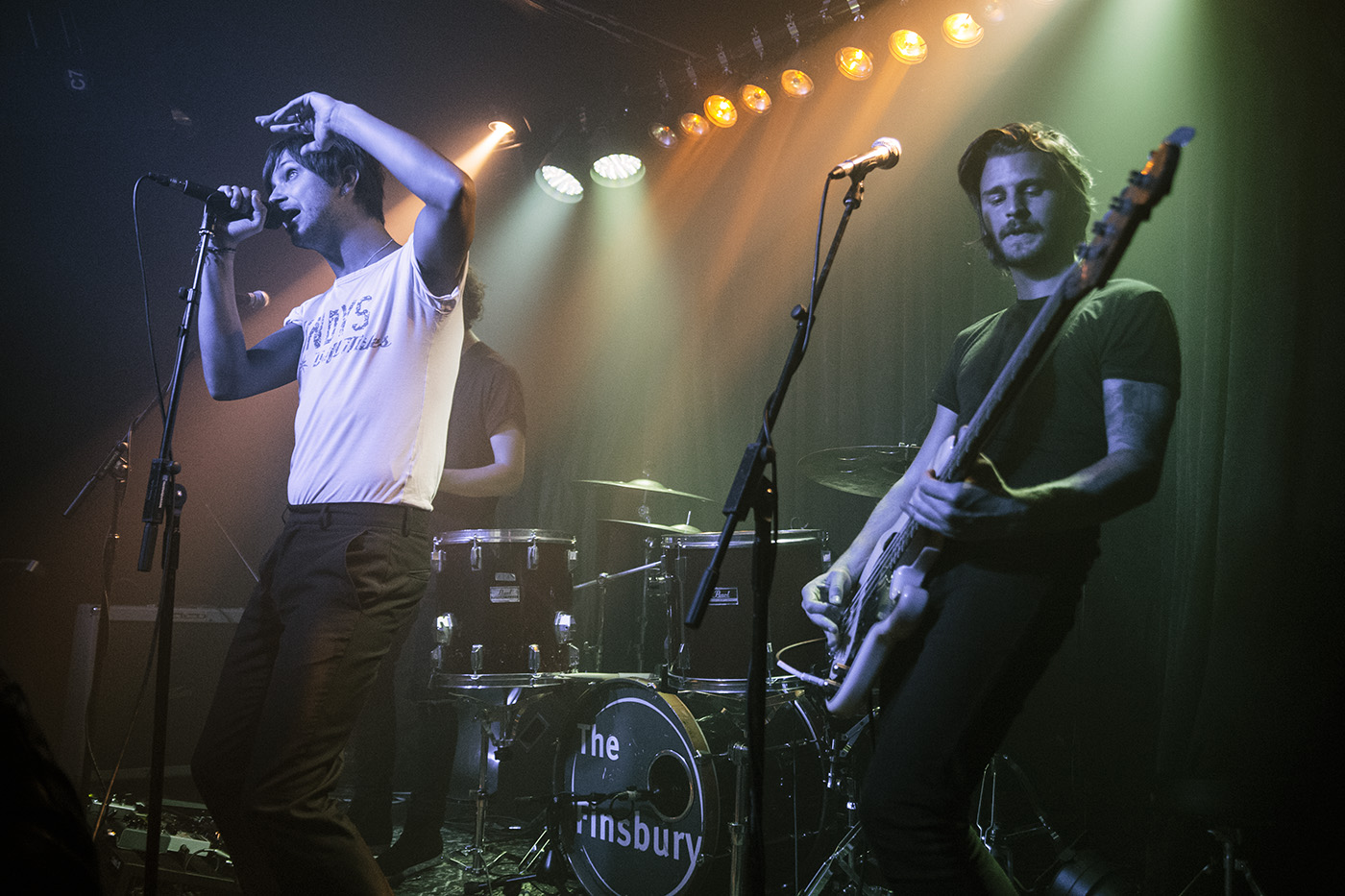 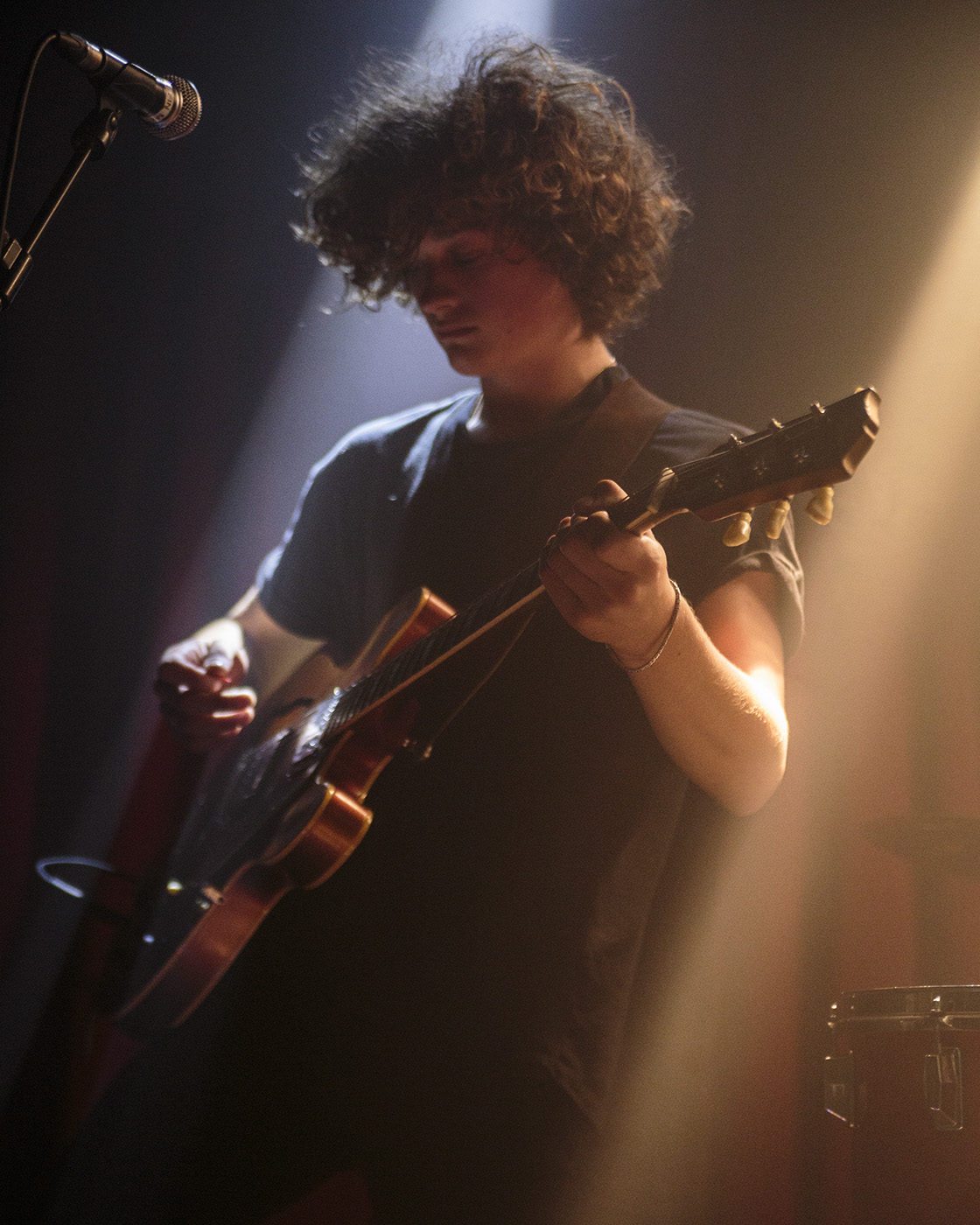 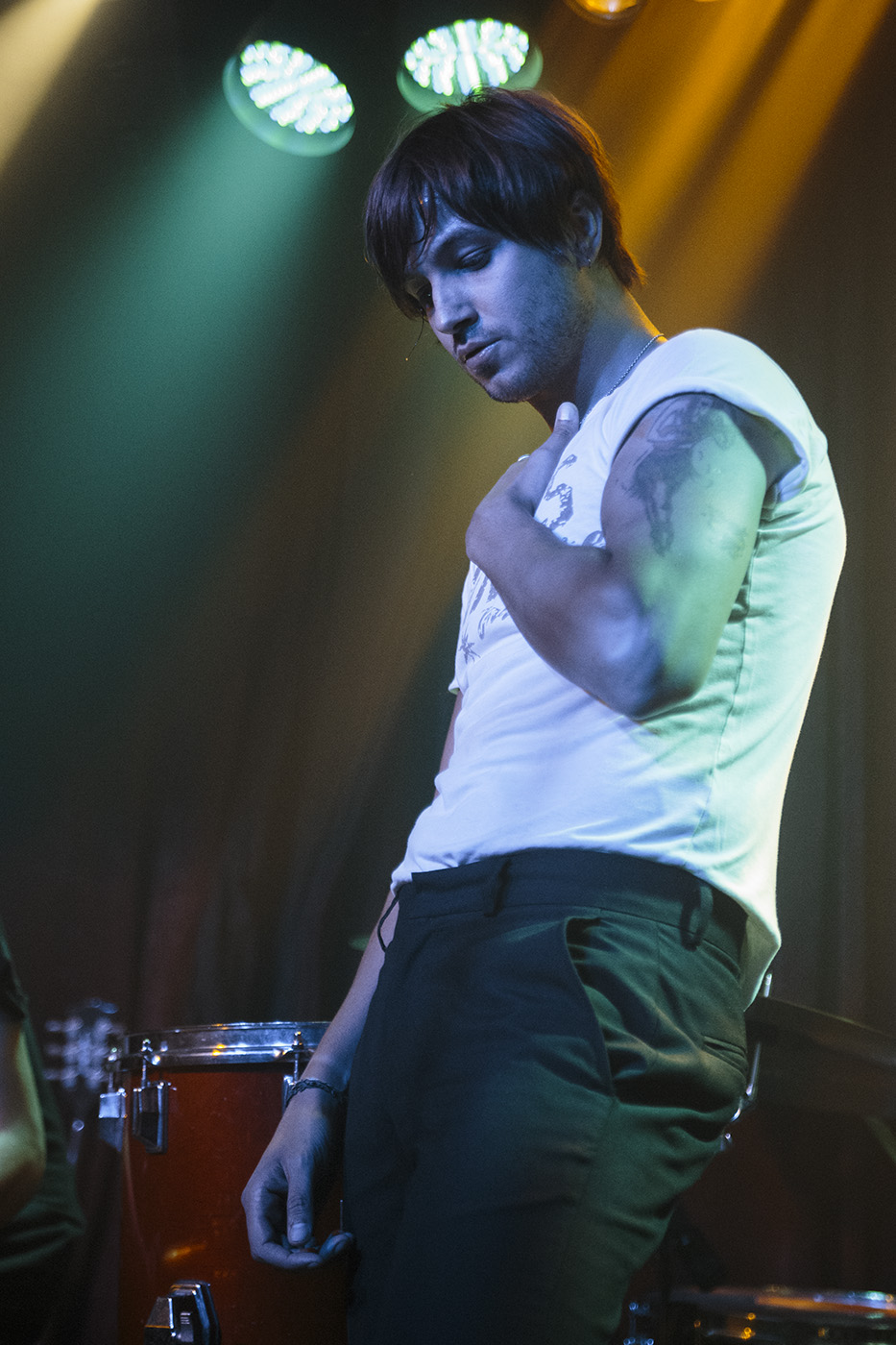 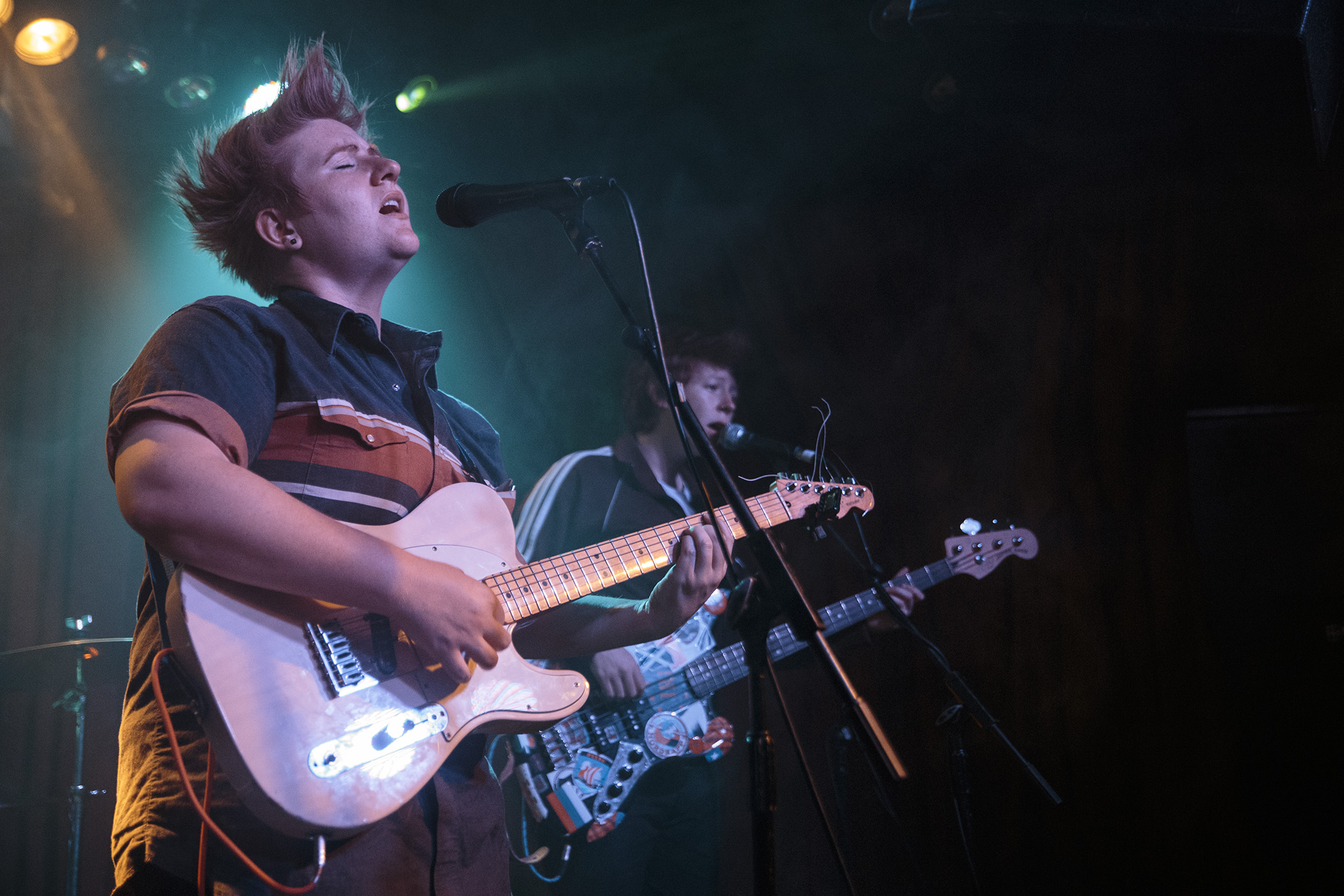 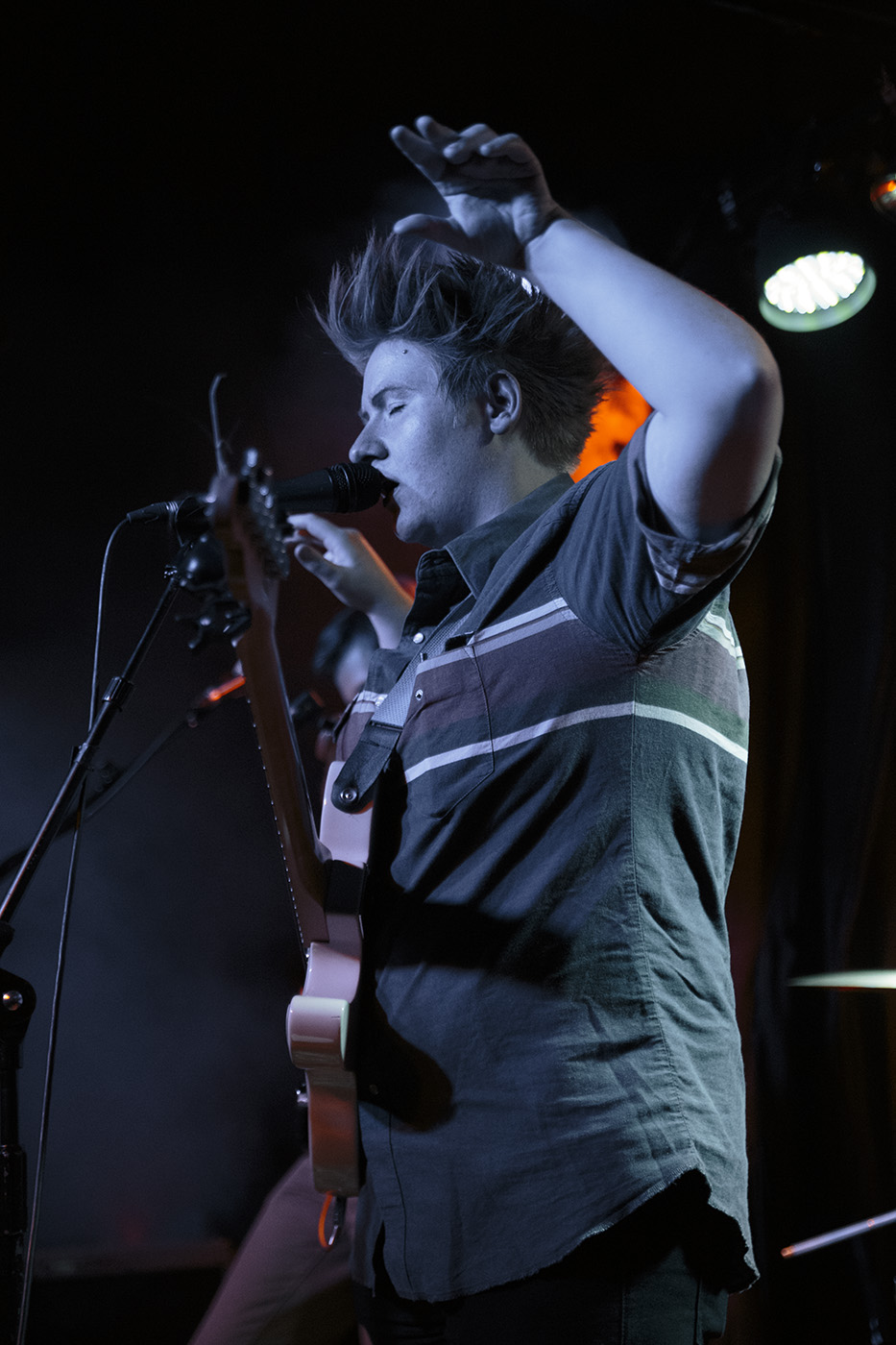 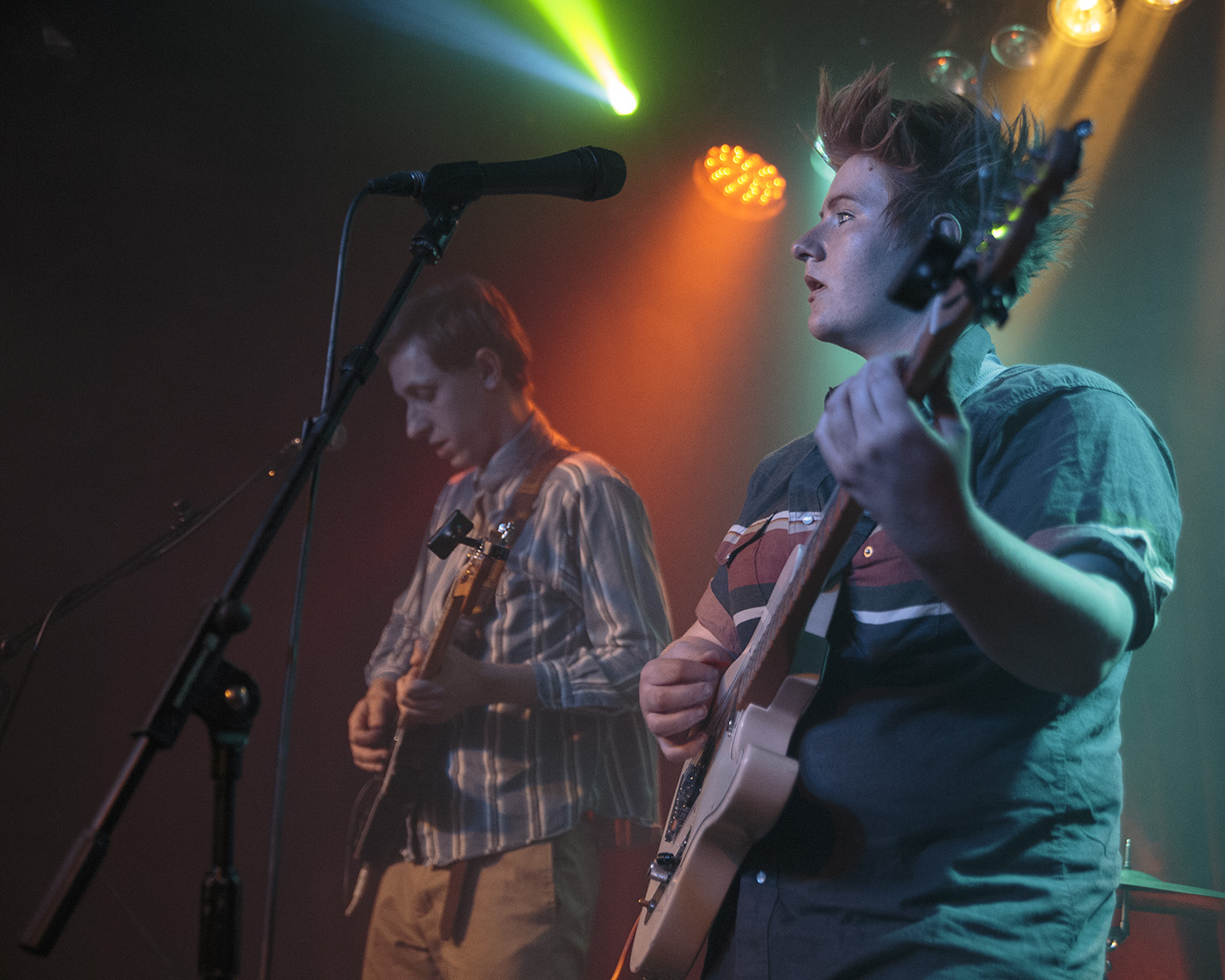 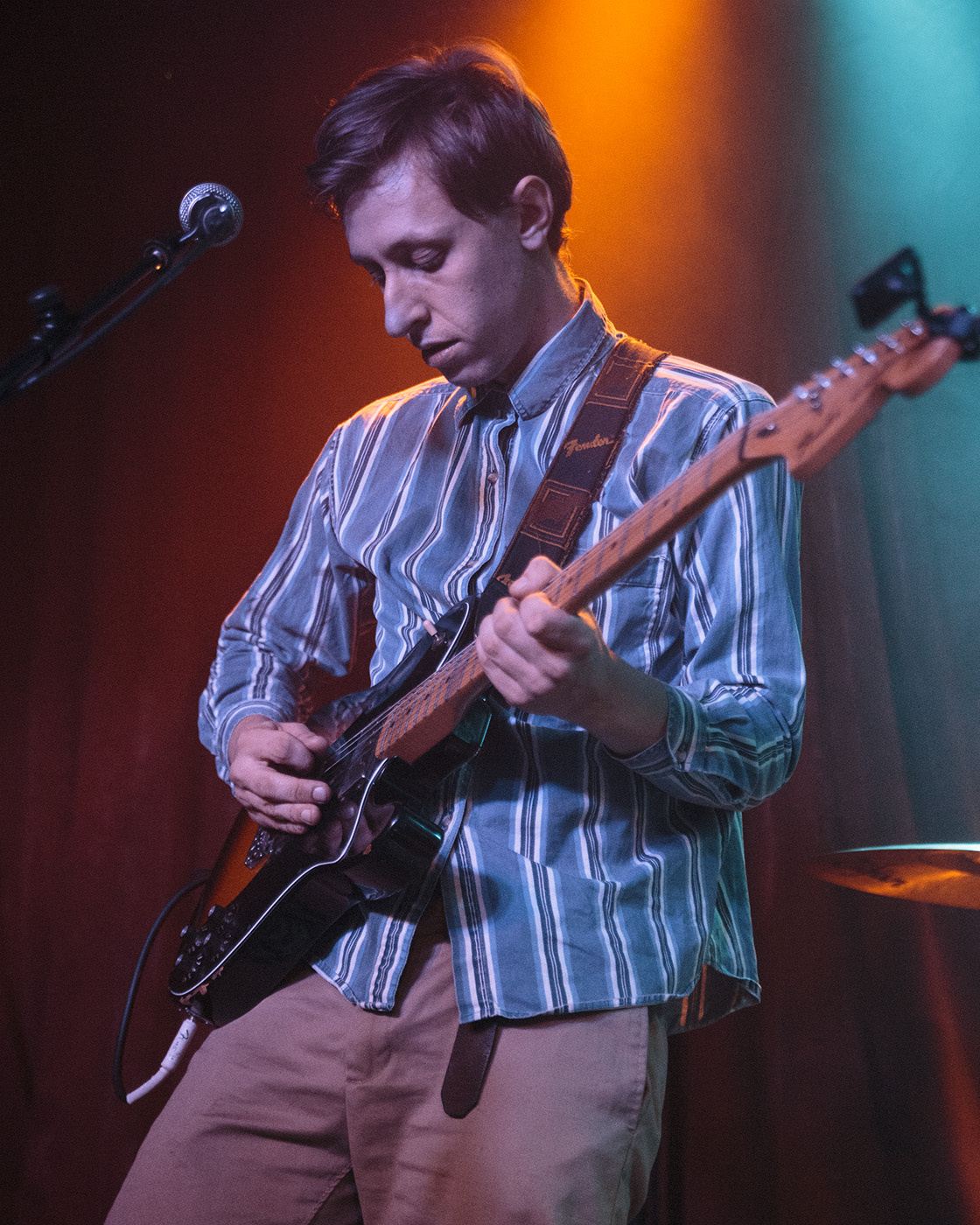 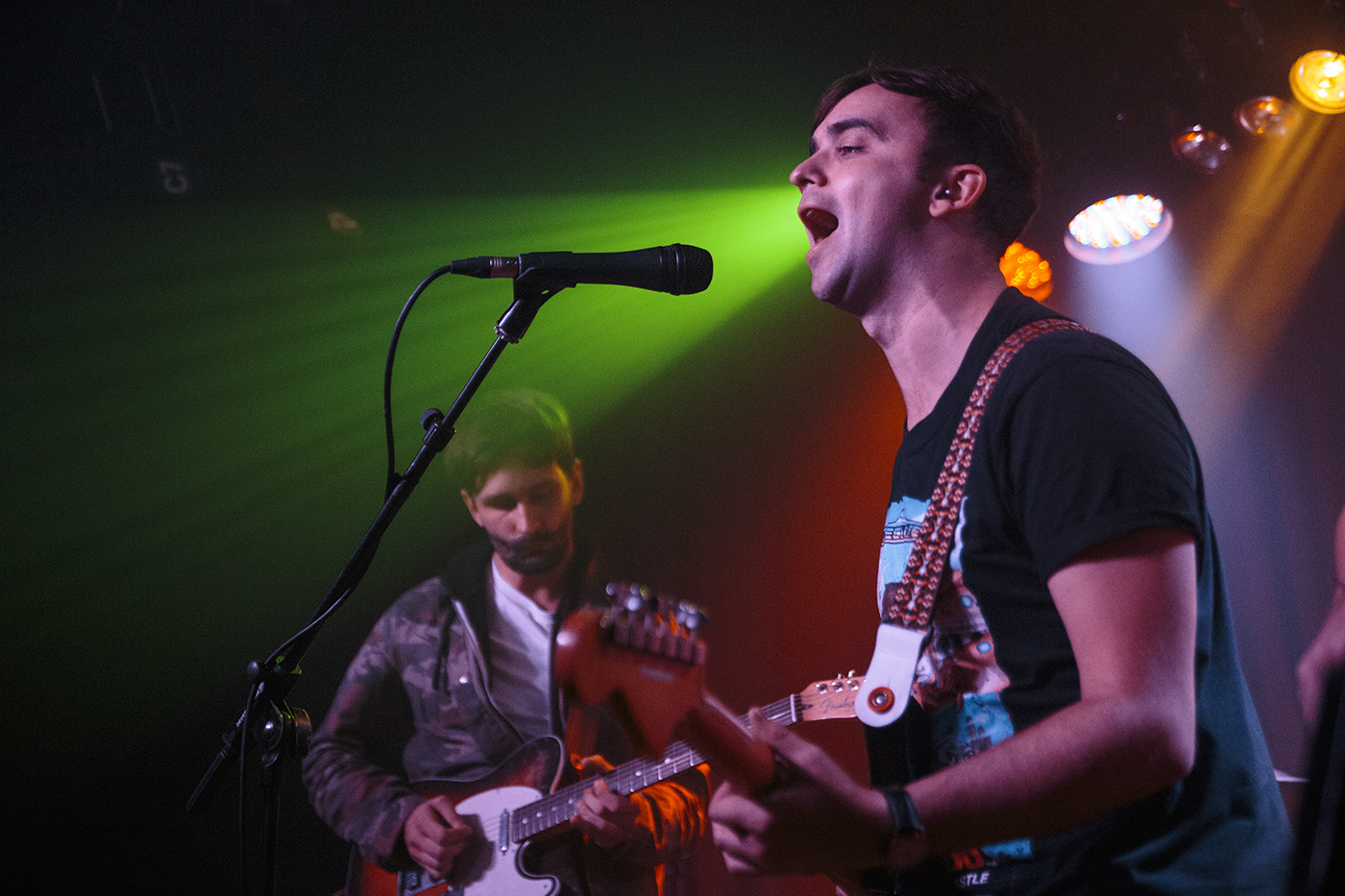 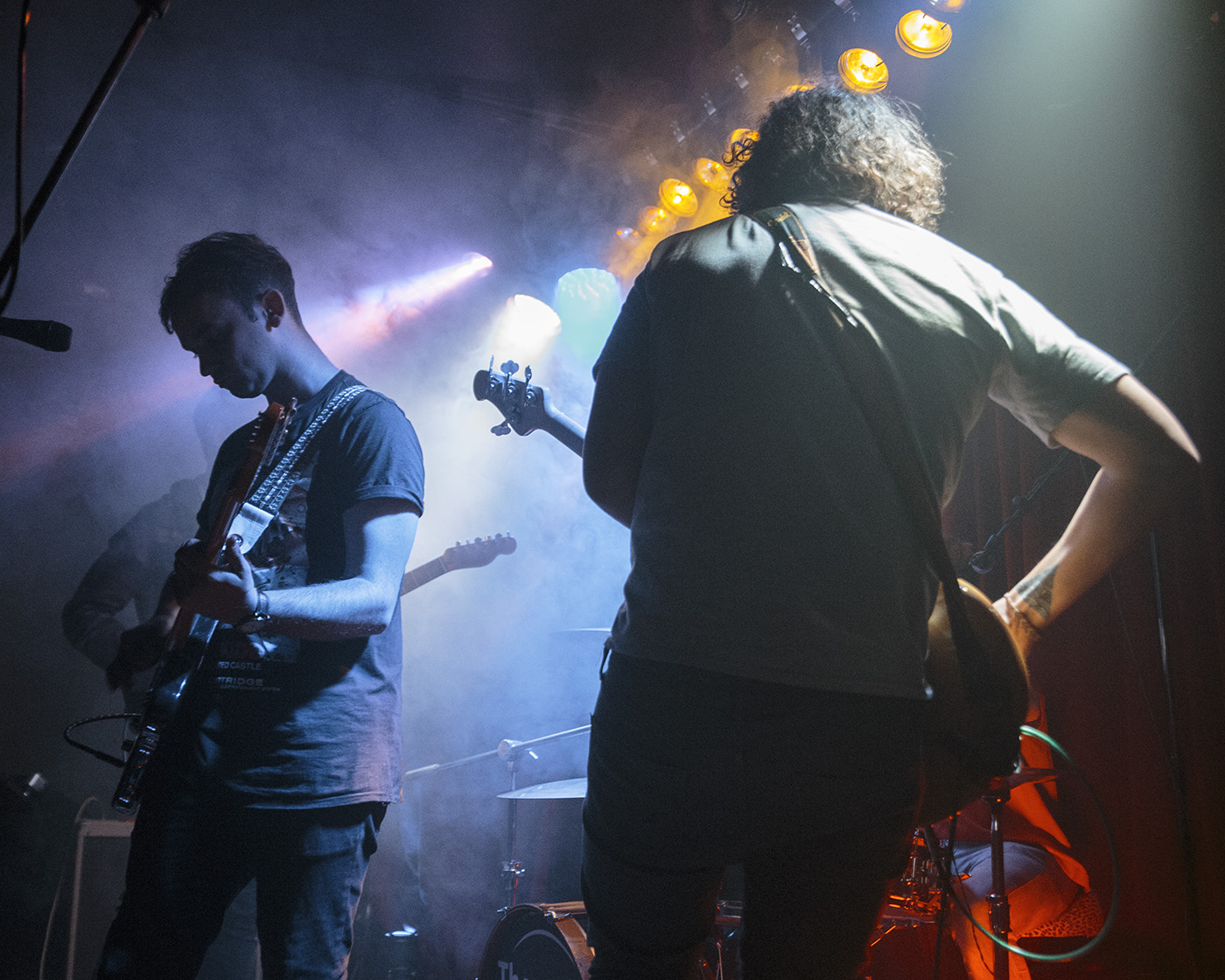 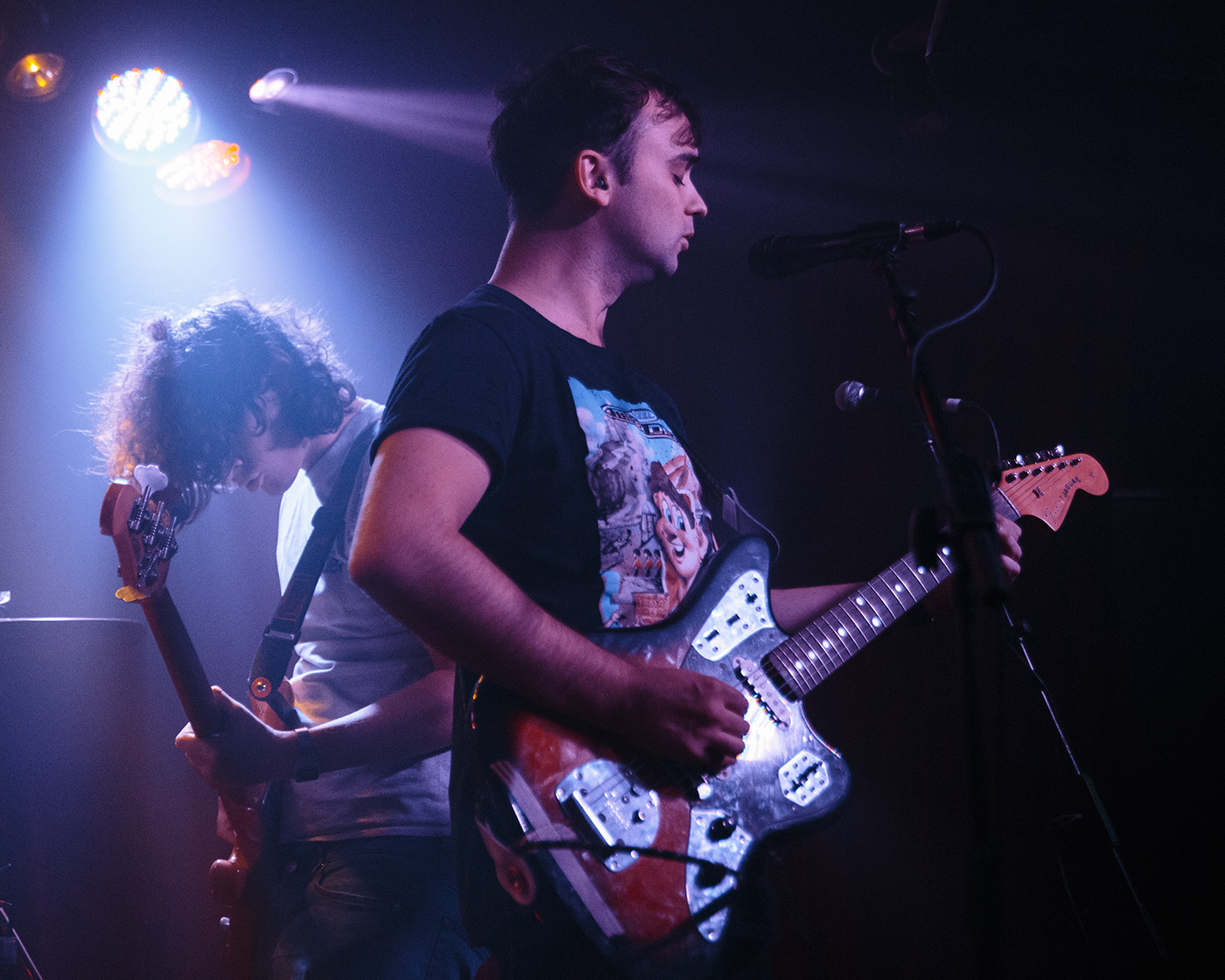 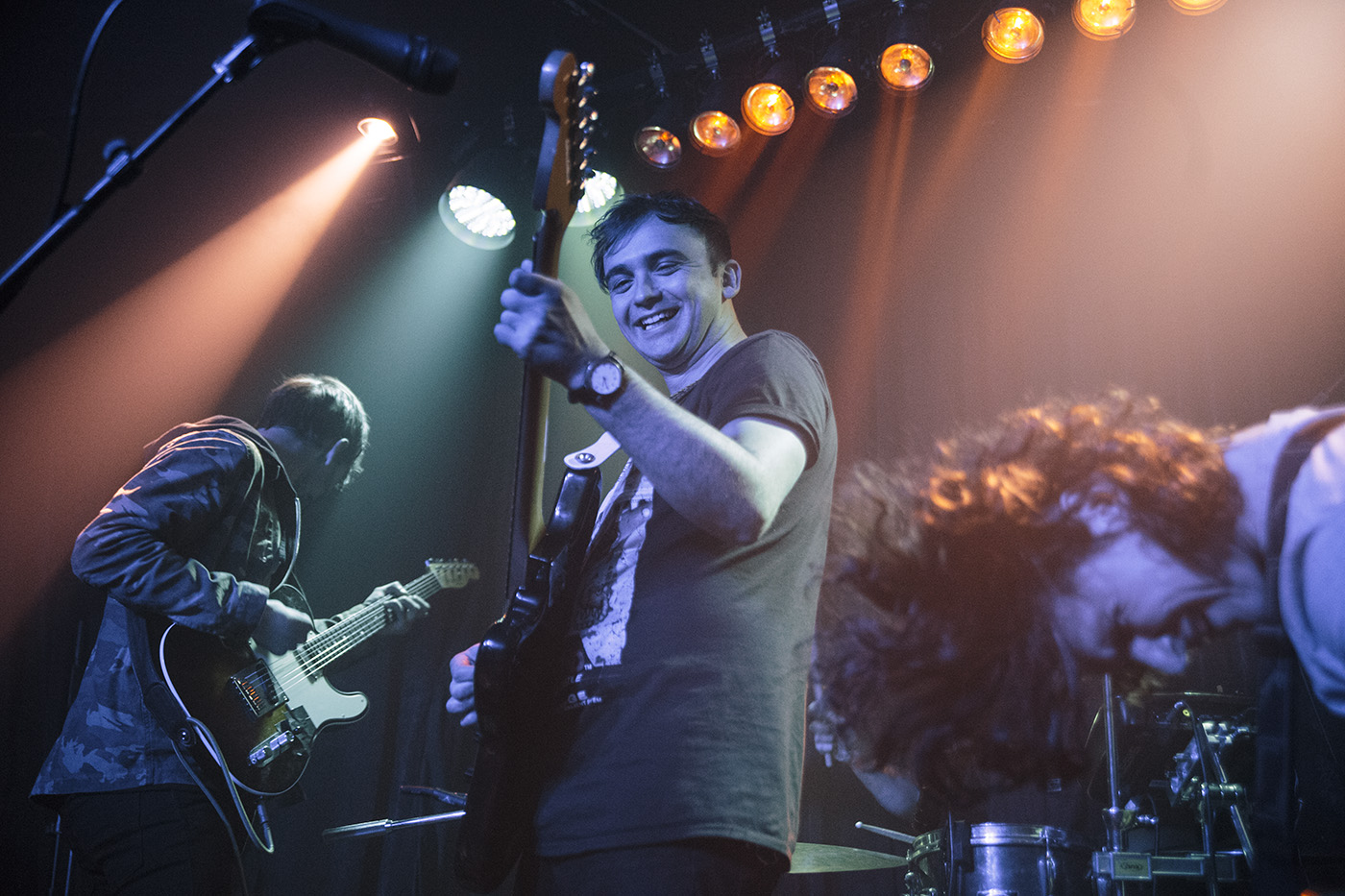 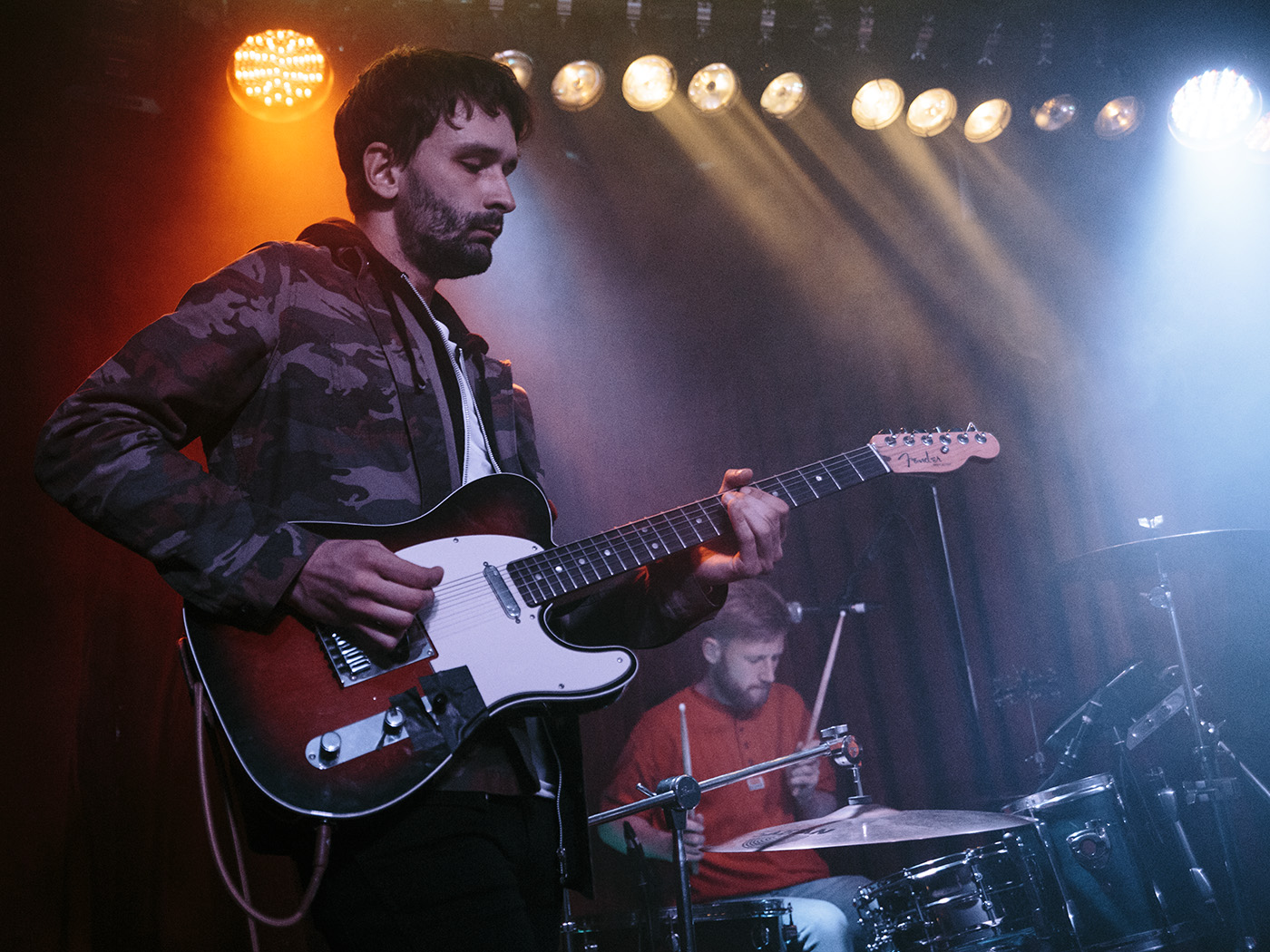 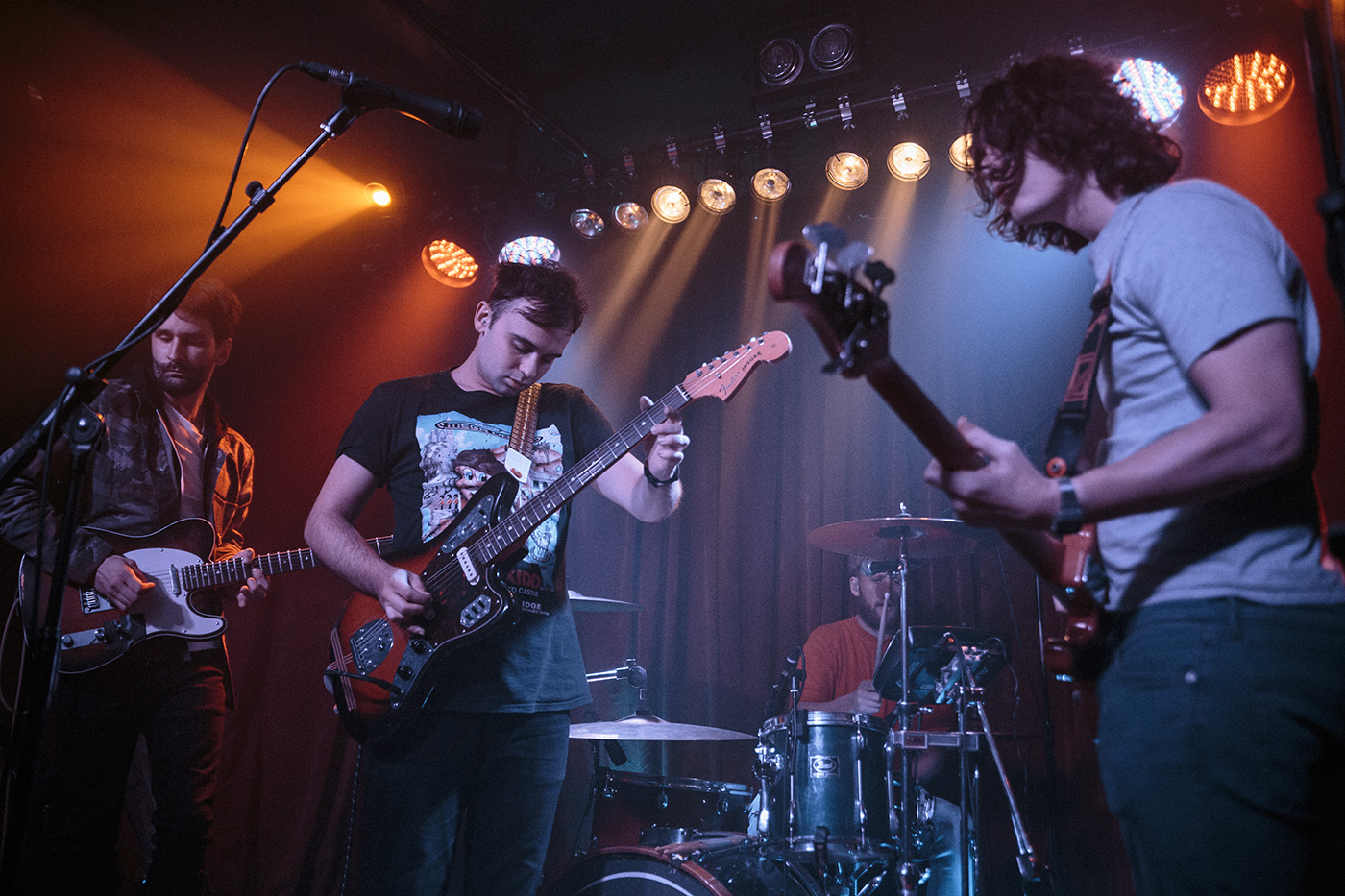 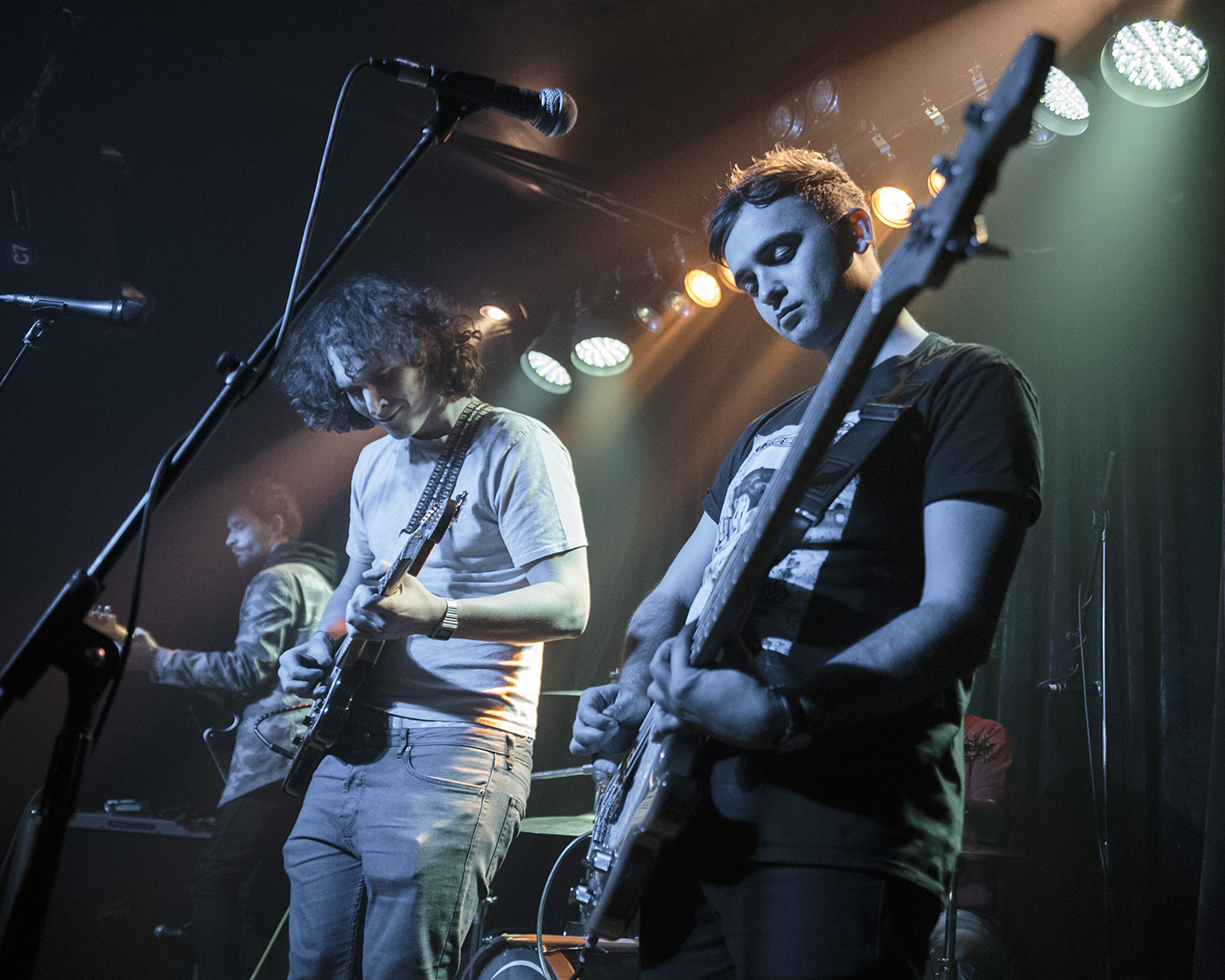 As part of the ongoing #Blogtober series at The Finsbury in London, FMS Magazine recently hosted a vibrant night packed with new music from four quickly emerging London-based bands.

The night kicked off with Childcare. The band’s mix of propulsive drums, thick basslines, sweet melodies and urban songcraft was at times hypnotic and throughout their set the band showed a mastery of building tension, musically and lyrically. In particular, they proved adept at capturing the feelings of anxiety that can cripple so many young people.

The craftsmanship and performance value of the band was fantastic, with instrumental sections and tight drum and bass combinations, courtesy of Emma Toplock and Glyn Daniels. There was also a harmonious mix of sweet female vocals from Toplock and the London twang of lead singer, Ed Cares. Cares roamed throughout the crowd and ended up laying on the floor towards the close of their set on ‘Omega Grey’.  There was even some space for some humour at the start, coming back on after some technical issues.

New single, ‘Film Club’, is due for release later this year and they have been announced as support to Bastille on some of their upcoming UK dates.

Next up, Playing House delivered an exuberant mix of tight art-rock riffs, playful lyricism (tinged with darkness) and a strong dose of nostalgia. Their indie rock sound is reminiscent of many of the more art minded indie bands of the early noughties, which is not surprising given the age of the band; these were their formative years. More unique however was their honest lyricism, in particular on their breakout track, ‘New Haircut’. Elsewhere the band showed themselves capable of writing affecting songs of lost love and slowly came to terms with their passing youth.

Electronics and synths add depth to their sound, and with time this can be expanded and evolved to add real variety and range. For now we have the benefit of enjoying a band on the rise, previewing new songs on the night, ahead of the release of their new album in February 2017 – recorded with Mercury Prize winner Richard Formby (Wild Beasts, Ghospoet) – and tour dates following later that year.

FACE performed a thumping set of their alt inspired pop music. The band looked every part the pop rock band and their music had the choruses to match. Their sound was big and full bodied, filling the room and testament in part to the quality of space The Finsbury can provide. The band wear their range of inspirations on their sleeves, drawing on the likes of Jimmy Eat World, their riffs carrying touches of Foals and Catfish and the Bottlemen, whilst lead singer David Arthur was every part the theatrical lead.

Their lyrics are often filled with melancholy, restlessness and lost love, as typified on ‘Fear’, the lead track from their debut EP of the same name. ‘Fear’ opens with swelling synths that build anticipation ahead of a country inspired track and anthemic chorus. A similar pattern is followed on ‘Change’, and both tracks point to the huge potential of the band.

There was even space for a musical breakdown mid set, Arthur and Matt Kern (bassist and fellow songwriter) joining Slim Gabriel on drums and creating a thumping rhythm section alongside guitarist JC. This proved that FACE aren’t just a pop band but talented musicians, and with a recording session in LA coming up (having signed to Stuart Price’s new label AOA) the band seem well set for future successes.

London based Three Girl Rhumba brought the night to a close, with a set filled with their heady mix of tropical/Balearic inspired indie, and ensured the night finished on a real high, the perfect antidote to the quickly onsetting British winter.

New tracks, including the band’s latest single, ‘Pica’ (see its warm, pastel coloured video below), were played alongside their best known tracks, such as ‘Minnie Driver’, and touched on tales of youth and love, all filtered through a warm, feel-good screen. The lack of familiarity with those new tracks did not do any harm to the performance, and whilst the band have clearly cultivated a following in their adopted hometown, they drew an equally positive reaction from the rest of the crowd, their sound making dancing almost irresistible. Tom Thurgood, James Sefton, Ed Day and Ian Lee brought a real energy and vibrancy to the set, their interactions with the crowd refreshing and their rawness a reminder that Three Girl Rhumba, and everyone else who played on the night, are young bands making real progress in the music industry.

Blogtober continues every night at The Finsbury for the rest of October – full line-up HERE.