Following a fantastic run of nights at The Lexington, PIAS Nites returns with its latest event at London’s newest venue, Omeara; featuring electronic artists, Vessels, Kllo and Groves. FMS Magazine have a pair of tickets to give away to what promises to be a brilliant night- see below for more details.

The establishment of Omeara in Borough has been overseen by Mumford & Sons and Communion’s Ben Lovett, as he and his team have sought to create a venue that both provides a platform for emerging bands whilst helping protect the small venue culture of the capital. PIAS have decided to embrace this and host their latest night here, hosting a number of acts from the electronic arm of PIAS, Different Recordings.

Leeds based band, Vessels, follow a run of summer festival dates with a return to the capital and the promise of new material from their upcoming album, due for release in early 2017. This follows a re-release of their third album, Dilate, having signed to Different earlier this year. That record saw the band move forward from their early post rock sound to a more undulating, pulsating form of electronica, in the vein of Four Tet or Caribou. Recent track, ‘Are You Trending?’ suggests that the band has continued to move further away from their guitars and further embraced house influences, whilst retaining their thoughtful, mature approach to song-craft.

Kllo, an Australian duo, are coming to the UK after sell out dates in Australia, the release of a new EP (Well Worn) in August, and having racked up more than 10 million Spotify streams. Their blend of UK garage and two step with R&B overtones places the cousins, Chloe Kaul and Simon Lam, right on the pulse of the pop-electronica scene, and has seen many plaudits mark them as breakout stars for 2016. Kaul’s vaporous vocals mixed with the warm synth lines of Lam, mix over beats ranging from glitchy to soulful, and prove the electronic scene in Australia is buoyant, joining fellow stars Flume and UV Boi. Their debut album is set for release in 2017.

Groves are the most recent signing to Different Recordings. The Manchester raised and London based band have made a name for themselves at club nights, warehouse parties and their live shows throughout the capital. Their subtle blend of atmospherics, math rock and melodica is captured perfectly on debut single, ‘Do You Feel’ , which hints at even more to come. With touches of Hot Chip, Foals and Haelos, take the opportunity to catch this band very early on!

Don’t miss out on the opportunity to enjoy this eclectic mix at London’s newest venue – tickets are available HERE.

FMS Magazine have one pair of tickets to give away for the PIAS NITES event on Thursday, 03 November. To be in with a chance of winning, simply follow @FMSmag on Twitter and retweet the competition tweet. Entries close on Monday, 24 October. One winner will be selected at random and notified via Twitter. There is no cash prize alternative. 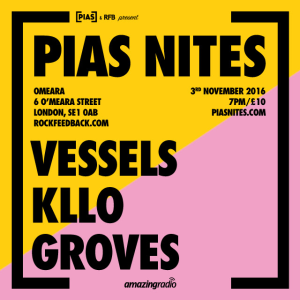