Tom Ogden, frontman of Stockport indie upstarts Blossoms, was eight-years-old when he first visited his hometown’s famous Plaza Theatre. ‎Ostensibly there to watch a special matinee screening of the 1952 film classic Singin’ in the Rain, the young Ogden, wide-eyed and curious, was too engrossed in his surroundings to follow what was happening on the screen.

“I couldn’t believe how big everything was,” he recalls. “I’d never been anywhere like that before; I was just overwhelmed by it all. The Plaza’s such a grand, historic venue.”

15 years later and Ogden, alongside his Blossoms bandmates – Charlie Salt (bass), Josh Dewhurst (guitar), Joe Donovan (drums) and Myles Kellock (keyboards) – are now gearing up to headline the Plaza Theatre for a special album launch concert, on Friday 5th August. On the stroke of midnight, the exact moment that their self-titled, James Skelly-produced debut album is released, Blossoms will take to the Plaza stage for what Ogden describes as, “Probably the most special gig we’ve done. Being Stockport lads, this is the pinnacle! I’ve gone past the Plaza every day on the bus for most of my life. It’s surreal.”

Surreal perhaps, though it’s fair to say Ogden has surely overcome that childhood wonderment about the Plaza’s imposing size. Indeed, if there’s one particular characteristic that’s come to define Blossoms’ rise over the past two years, it’s surely the value of thinking big.

Touring relentlessly, they went from playing to 30 people in Stockport pubs to headlining the Manchester Ritz in just over a year. They signed to major label Virgin EMI, a platform which Ogden states, “gives us the chance to have our music heard by as many people as possible. I’ve never got why some bands only wanna be underground.” ‎And, perhaps most significantly, they were the only guitar act to appear on the influential BBC Sound of 2016 list at the start of the year.

Conquer-the-world rhetoric might well be intrinsic to the Manchester band DNA, but there’s a steely determination to the way Blossoms, from the very outset, predicted the way things would pan out. “Even when we played (intimate ‎Manchester boozer) The Castle,” Ogden recalls, “We were picturing ourselves playing arenas. The kind of songs we write, they’re meant to be heard by big crowds in big venues. We write pop songs with choruses for people to sing along to. There’s no shame in that.”

The fact that Blossoms have earned approving nods from various local alumni – they’ve supported The Stone Roses at the Etihad Stadium, and Johnny Marr is a vociferous cheerleader – also suggests a certain passing of the Manc music torch.

“It’s weird to meet all these people you admire and who’ve influenced you,” Ogden beams. “Johnny Marr approached us in the Arndale and said he liked one of our tunes. It’s crazy.”

Out of all the musical alliances they’ve made, however, it’s fair to say Blossoms’ strongest bond was with Viola Beach. The Warrington band – who all died, along with their manager, in a car accident in Sweden back in February – were actually due to support Blossoms on tour until fate tragically intervened. Blossoms decided to honour their friends by continuing the tour, each night playing out a 25-minute audio recording of a Viola Beach set.

“It was emotional and upsetting to watch, but celebratory as well,” reflects Ogden. “We wanted to give them the platform their music deserved. They were amazing lads, so full of enthusiasm about being in a band. Watching them progress, it had so many echoes of what we did. It just puts everything into perspective.”

You get the sense that Blossoms, for all their steely self-possession, are still trying to process everything that’s happened to them over the past 18 months. Even so, with a manic few months ahead – album promotion, festival appearances, tours of Asia, that performance at the Plaza Theatre – the idea of sitting back and toasting their success is just about the last thing on Blossoms’ minds.

“There’s been a lot to take in,” says Ogden. “By the end of the year, I think we’ll have done about 150 shows. But we’re not gonna sit back and get lazy. I’ve already starting writing the second album. We’ve dreamt about this all our lives; we want to keep progressing.”

Blossoms self-titled debut album is out on August 5th via Virgin EMI, and is available to pre-order HERE. 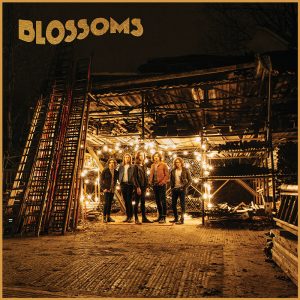