Cage The Elephant: Cage Against The Machine 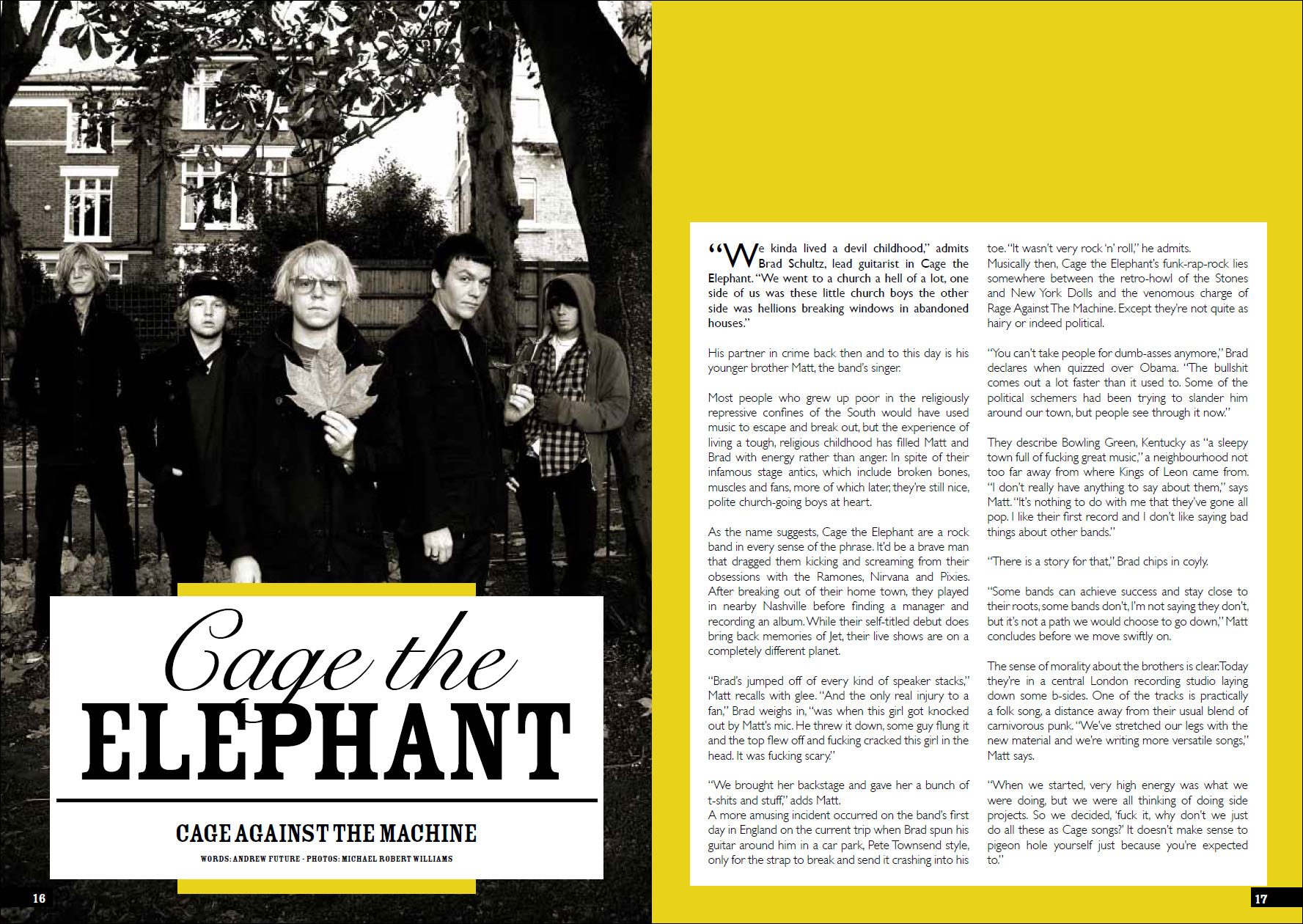 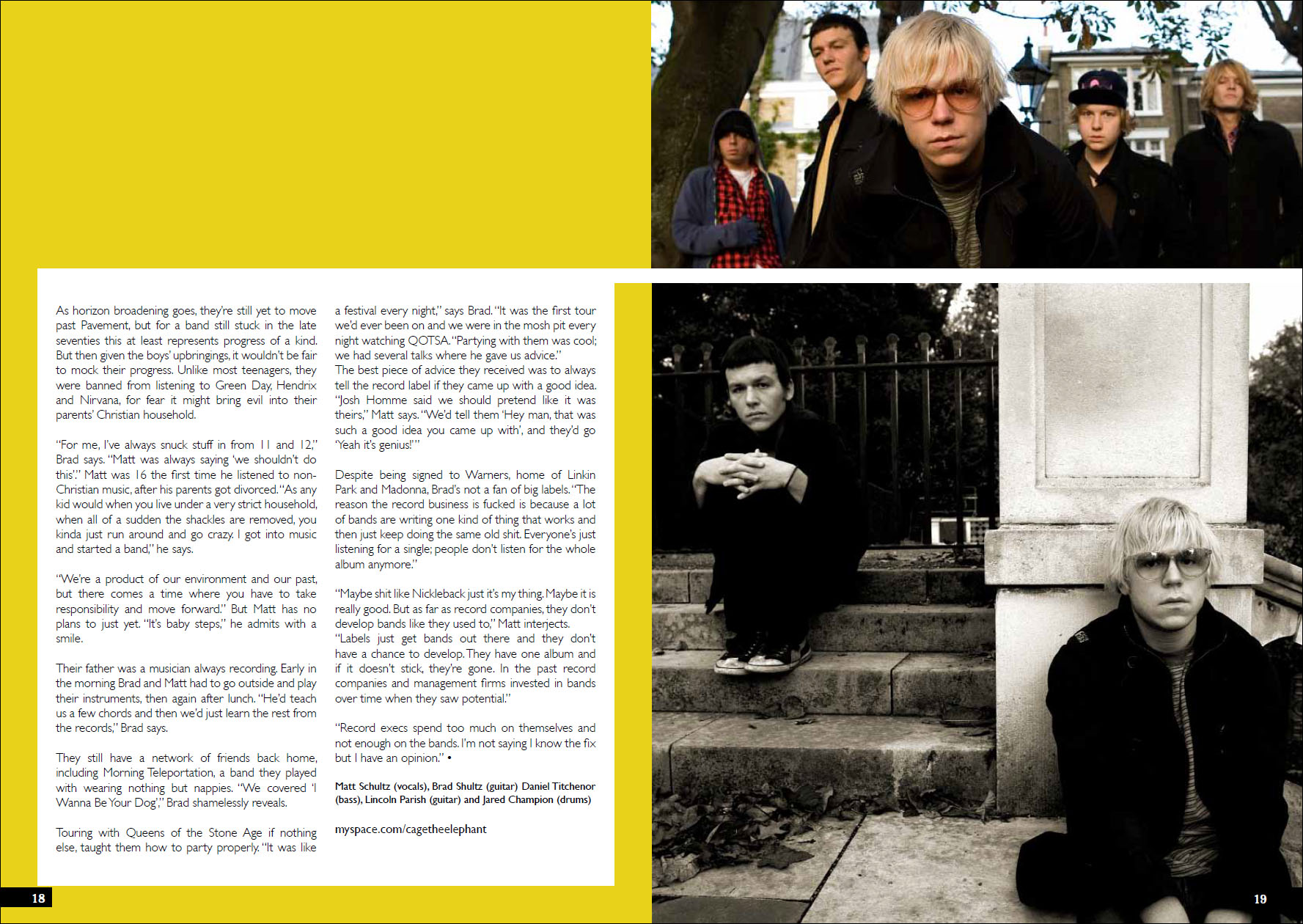 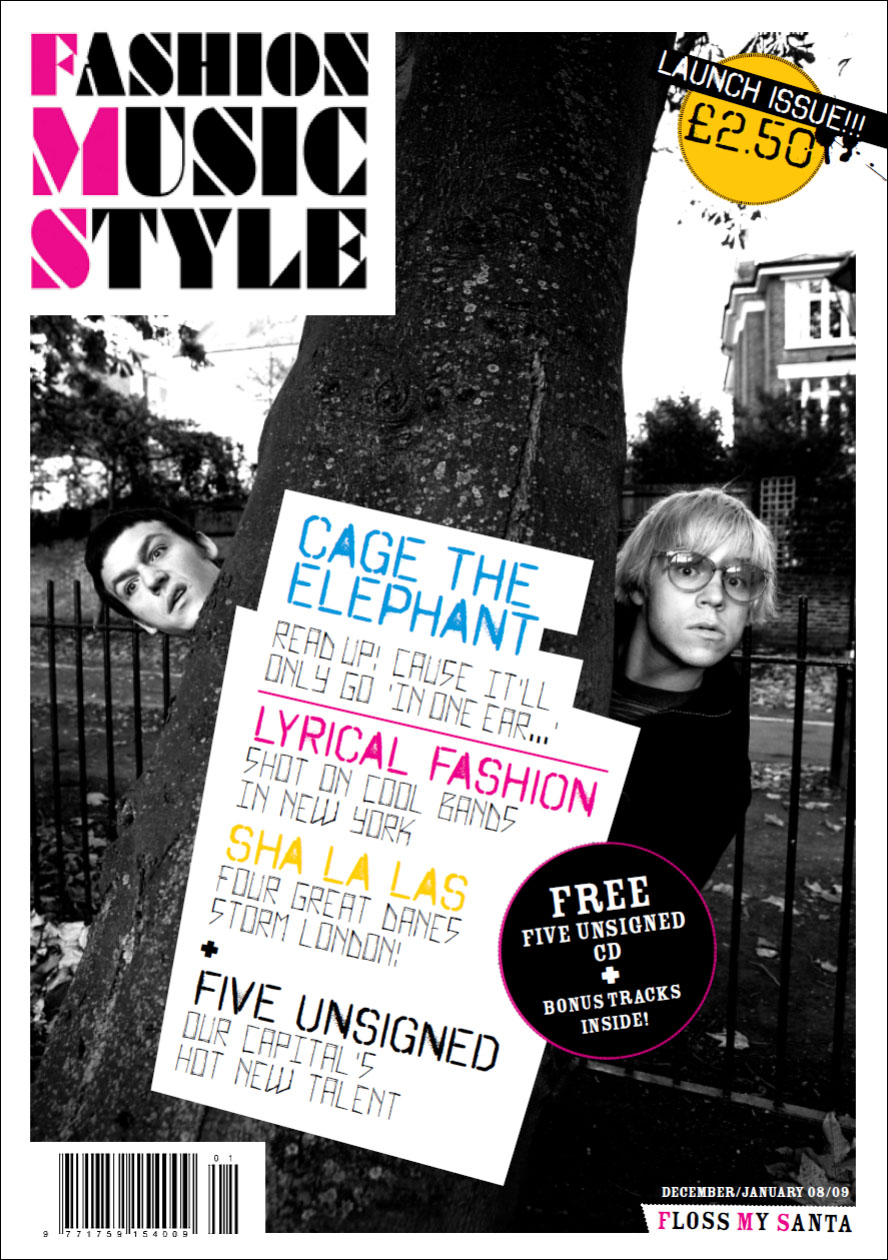 “We kinda lived a devil childhood,” admits Brad Shultz, lead guitarist in Cage The Elephant. “We went to a church a hell of a lot, one side of us was these little church boys, the other side was hellions breaking windows in abandoned houses.”

His partner in crime back then and to this day is his younger brother Matt, the band’s singer.

Most people who grew up poor in the religiously repressive confines of the South would have used music to escape and break out, but the experience of living a tough, religious childhood has filled Matt and Brad with energy rather than anger. In spite of their infamous stage antics, which includes broken bones, muscles and fans, more of which later, they’re still nice, polite church-going boys at heart.

As the name suggests, Cage The Elephant are a rock band in every sense of the phrase. It’d be a brave man that dragged them kicking and screaming from their obsessions with the Ramones, Nirvana and Pixies. After breaking out of their hometown, they played in nearby Nashville before finding a manager and recording an album. While their self-titled debut does bring back memories of Jet, their live shows are on a completely different planet.

“Brad’s jumped off every kind of speaker stacks,” Matt recalls with glee. “And the only real injury to a fan,” Brad weighs in, “was when this girl got knocked out by Matt’s mic. He threw it down, some guy flung it and the top flew off and cracked this girl in the head. It was fucking scary.”

“We brought her backstage and gave her a load of t-shirts and stuff,” adds Matt.

A more amusing incident occurred on the band’s first day in England, on the current trip, when Brad spun his guitar around him in a car park, Pete Townsend style, only for the strap to break and send it crashing into his toe. “It wasn’t very rock ‘n’ roll,” he admits.

Musically then, Cage The Elephant’s funk-rap-rock lies somewhere between the retro-howl of the Stones and New York Dolls, and the venomous charge of Rage Against The Machine. Except they’re not quite as hairy, or indeed political.

“You can’t take people for dumb-asses anymore,” Brad declares when asked about Obama. “The bullshit comes out a lot faster than it used to. Some of the political schemers had been trying to slander him around our town, but people see through it now.”

They describe Bowling Green, Kentucky as “a sleepy town full of great fucking music,” a neighbourhood not too far away from where Kings of Leon came from. “I don’t really have anything to say about them,” says Matt. “It’s nothing to do with me that they’ve gone all pop. I like their first record and I don’t like saying bad things about other bands.”

“Their is a story for that,” Brad chips in coyly.

“Some bands can achieve success and stay close to their roots, some bands don’t, I’m not saying they don’t, but it’s not a path we would choose to go down,” Matt concludes before we move swiftly on.

The sense of morality about the brothers is clear. Today they’re in a central London recording studio laying down some b-sides. One of the tracks is practically a folk song, a distance away from the usual carnivorous punk. “We’ve stretched our legs with the new material and we’re writing more versatile songs,” Matt says.

“When we started, very high energy is what we were doing, but we were all thinking of doing side projects. So we decided ‘fuck it, why don’t we just do all these as Cage songs?’ It doesn’t make sense to pigeonhole yourself, just because you’re expected to.”

As horizon broadening goes, they’re still yet to move past Pavement, but for a band still stuck in the late seventies this at least represents progress of a kind. But then given the boys’ upbringings, it wouldn’t be fair to mock their progress. Unlike most teenagers, they were banned from listening to Green Day, Hendrix and Nirvana, for fear it may bring evil into their parents’ Christian household.

“For me, I’ve always snuck stuff in from 11 and 12,” Brad says. “Matt was always saying ‘we shouldn’t do this’.” Matt was 16 the first time he listened to non-Christian music, after his parents got divorced. “As any kid would when you live under a very strict household, when all of a sudden the shackles are removed, you kinda just run around and go crazy. I got into music ans started a band,” he says.

“We’re a product of our environment and our past, but there comes a time when you have to take responsibility and move forward.” But Matt has no plans to just yet. “It’s baby steps,” he admits with a smile.

Their father was a musician, always recording. Early in the morning Brad and Matt had to go outside and play their instruments, then again after lunch. “He’d teach us a few chords and then we’d just learn the rest from the records,” Brad says.

They still have a network of friends back home, including Morning Teleportation, a band they played with wearing nothing but nappies. “We covered ‘I Wanna Be Your Dog’,” Brad shamelessly reveals.

Touring with Queens of the Stone Age, if nothing else, taught them how to party properly. “It was like a festival every night,” says Brad. “It was the first tour we’d ever been on and we were in the mosh pit every night watching QOTSA. “Partying with them was cool, we had several talks where he gave us advice.”

The best piece of advice they received was to always tell the record label if they come up with a good idea. “Josh Homme said we should pretend like it was theirs,” Matt says. “We’d tell them ‘Hey man, that was such a good idea you came up with’, and they’d go ‘Yeah it’s genius!”

Despite being signed to Warners, home of Linkin Park and Madonna, Brad’s not a fan of big labels. “The reason the record business is fucked is because a lot of bands are writing one kind of thing that works and then just keep doing the same old shit. Everyone’s just listening for a single; people don’t listen for the whole album anymore.”

“Maybe shit like Nickleback just isn’t my thing. Maybe it is really good. But as far as record companies, they don’t develop bands like they used to,” Matt interjects.

“Labels just get bands out there and they don’t have a chance to develop. They have one album and if it doesn’t stick they’re gone. In the past, record companies and management firms invested in bands over time when they saw potential.”

“Record execs spend too much on themselves and not enough on the bands. I’m not saying I know the fix but I have an opinion.”

This feature was first published in Issue 01 of FASHION.MUSIC.STYLE, December/January 2008/09.