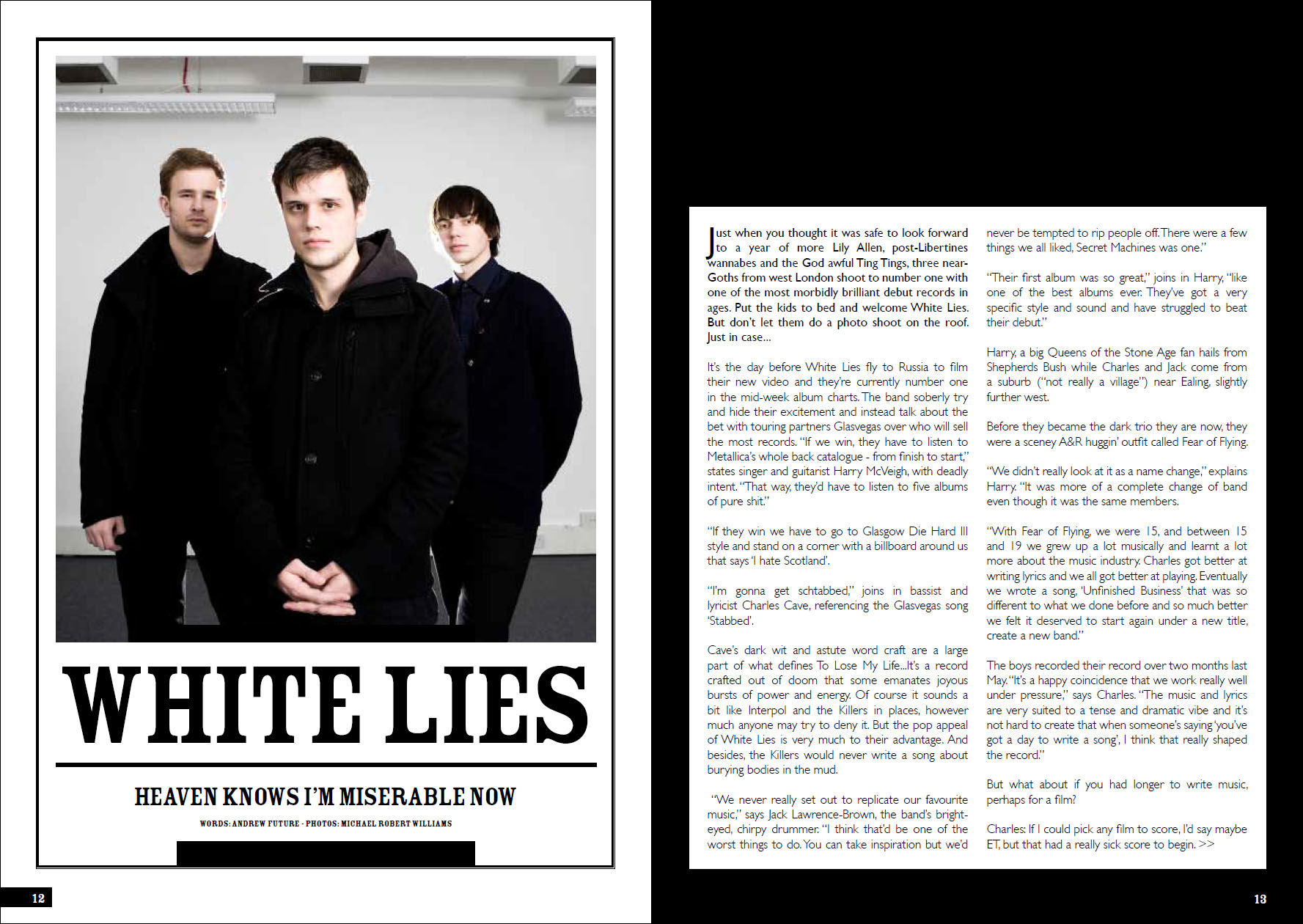 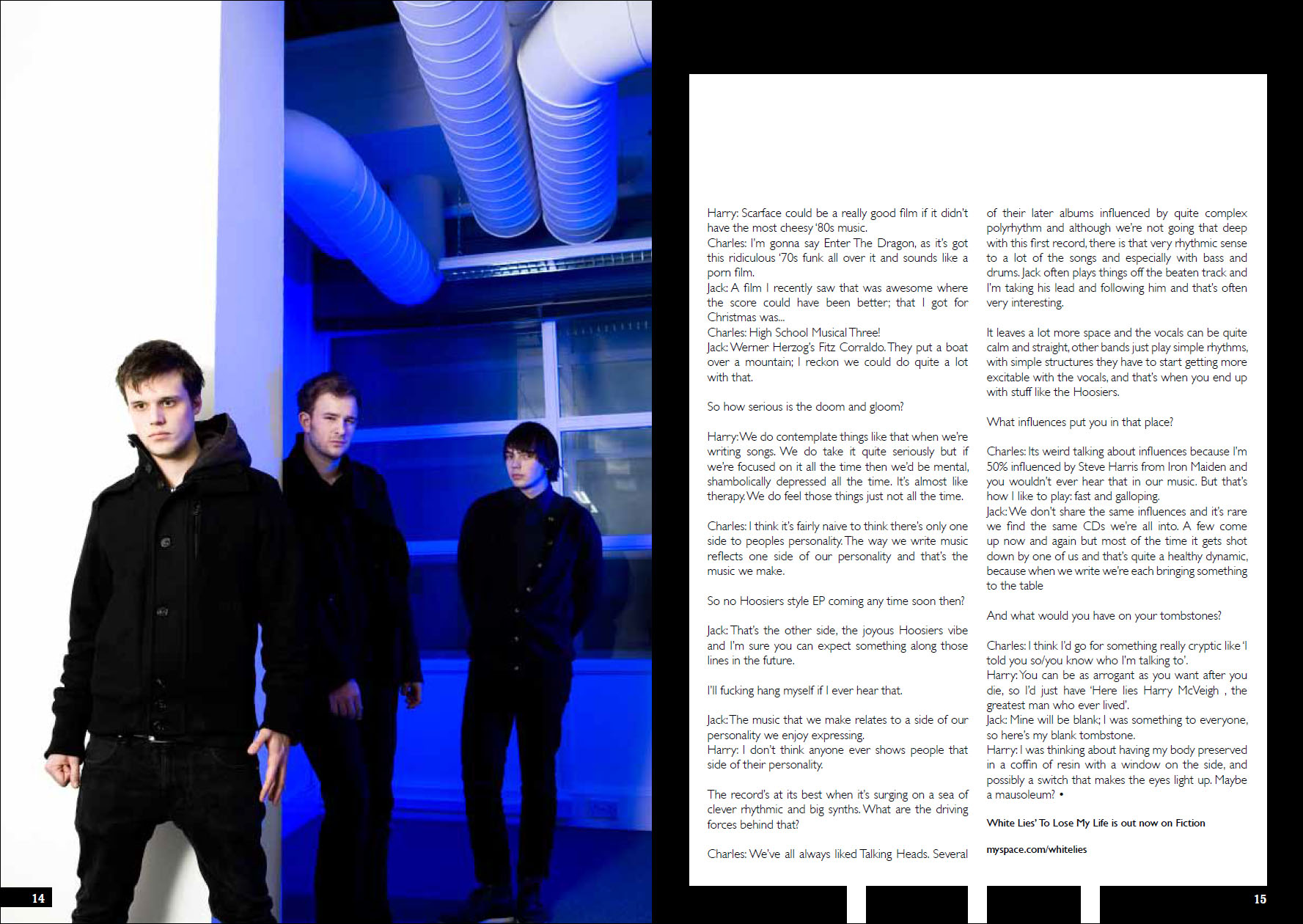 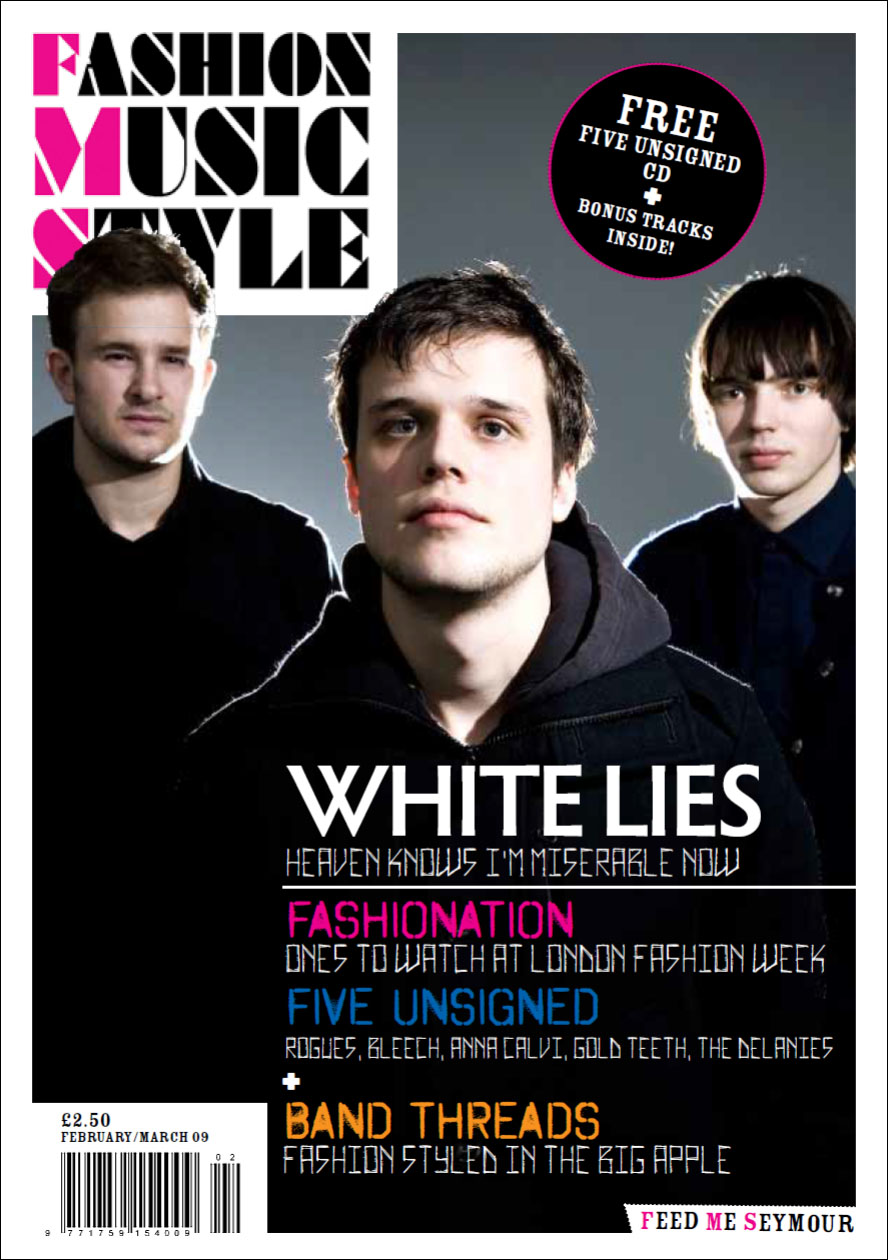 Just when you thought it was safe to look forward to a year of more Lily Allen, post-Libertine wannabes and the God awful Ting Tings, three near-Goths shoot to number one with one of the most morbidly brilliantly debut records in ages. Put the kids to bed and welcome White Lies. But don’t let them do a photo shoot on the roof. Just in case…

It’s the day before White Lies fly to Russia to film their new video, and they’re currently number one in the mid-week album charts. The band soberly try to hide their excitement and instead talk about the bet with touring partners Glasvegas over who will sell the most records. “If we win, they have to listen to Metallica‘s whole back catalogue – from finish to start,” states singer and guitarist, Harry McVeigh, with deadly intent. “That way, they’d have to listen to five albums of pure shit.”

“If they win, we have to go to Glasgow, Die Hard three style, and stand on a corner with a billboard around us that says ‘I Hate Scotland’.”

Cave’s dark wit and astute word craft are a large part of what defines To Lose My Life… It’s a record crafted out of doom that sometimes emanates joyous bursts of power and energy. Of course it sounds a bit like Interpol and the Killers in places, however much anyone may try to deny it. But the pop appeal of White Lies is very much to their advantage. And besides, the Killers would never write a song about burying bodies in the mud.

“We never really set out to replicate our favourite music,” says Jack Lawrence-Brown, the band’s bright-eyed, chirpy drummer. “I think that’d be one of the worst things to do. You can take inspiration but we’d never be tempted to rip anyone off. There were a few things we all liked, Secret Machines was one.”

“Their first album was so great,” joins in Harry, “like one of the best albums ever. They’ve got a very specific style and sound and have struggled to beat their debut.”

Harry, a big Queens of the Stone Age fan, hails from Shepherds bush, while Charles and Jack come from a suburb (“not really a village”) near Ealing, slightly further west.

Before they became the dark trio they are now, they were a sceney A&R huggin’ outfit called Fear of Flying.

“We didn’t really look at it as a name change,” says Harry. “It was more a complete change of band, even though it was the same members.”

“With Fear of Flying we were 15, and between 15 and 19 we grew up a lot musically and learnt a lot more about the music industry. Charles got better at writing lyrics and we all got better at playing. Eventually we wrote a song, ‘Unfinished Business’ that was so different to what we’d done before, and so much better, we felt it deserved to start again under a new title, create a new band.”

The boys recorded their record over two weeks last May, “It’s a happy coincidence that we work really well under pressure,” says Charles. “The music and lyrics are very suited to a dramatic vibe, and it’s not hard to create that when someone’s saying ‘you’ve got a day to create a song’, I think that really shaped the record.”

But what if you had longer to write music, perhaps for a film?

Charles: “If I could pick any film to score, I’d say maybe ET, but that had a really sick score to begin.”

Harry: “Scarface could be a really good film if it didn’t have the most cheesy ’80s music.”

Jack: “A film I recently saw that was awesome, where the score could have been better; that I got for Christmas was…”

Jack: “…Werner Herzog‘s Fitzcorraldo. They put a boat over a mountain; I reckon we could do quite a lot with that.”

So how serious is the doom and gloom?

Harry: “We do contemplate things like that when we’re writing songs. We do take it quite seriously, but if we focused on it all the time then we’d be mental, shambolically depressed all the time. It’s almost like therapy. We do feel those things just not all the time.”

Charles: “I think it’s fairly naive to think there’s only one side to peoples personality. The way we write music reflects ones side of our personality, and that’s the music we make.”

So no Hoosiers style EP coming anytime soon then?

Jack: “That’s the other side, the joyous Hoosiers vibe, and I’m sure you can expect something along those lines in the future.

I’ll fucking hang myself if I ever hear that.

Jack: “The music that we make relates to a side of our personality we enjoy expressing.”

Harry: “I don’t think anyone ever shows people that side of their personality.”

The record’s at its best when it’s surging on a sea of clever rhythmic and big synths. What are the driving forces behind that?

Charles: “We’ve always liked Talking Heads. Several of their later albums influenced by quite complex polyrhythm, and although we’re not going that deep with this record, there is that very rhythmic sense to a lot of the songs, and especially with bass and drums. Jack often plays things off the beaten track and I’m taking his lead and following him and that’s often very interesting. It leaves a lot of space and the vocals can be quite clean and straight, other bands just play simple rhythms, with simple structures they have to get more excitable with the vocals, and that’s when you end up with stuff like the Hoosiers.”

What influences put you in that place?

Charles: “It’s weird talking about influences because I’m 50% influenced by Steve Harris from Iron Maiden and you wouldn’t ever hear that in our music. But that’s how I like to play: fast and galloping.”

Jack: “We don’t share the same influences and it’s rare we find the same CDs we’re all into. A few come up now and again but most of the time it gets shot down by one of us and that’s quite a healthy dynamic, because when we write we’re each bringing something to the table.”

And what would you have on your tombstone?

Charles: “I think I’d go for something really cryptic like ‘I told you so/you know who I’m talking to’.”

Harry: “You can be as arrogant as you want when you die, so I’d just have “Here lies Harry McVeigh, the greatest man who ever lived’.”

Jack: “Mine will be blank; I was something to everyone, so here’s my blank tombstone.”

Harry: “I was thinking of having my body preserved in a coffin of resin with a window on the side, and possibly a switch that makes the eyes light up. Maybe a mausoleum?”

White Lies’ To Lose My Life is out now on Fiction.

This feature was first published in Issue 02 of FASHION.MUSIC.STYLE, February/March 2009.