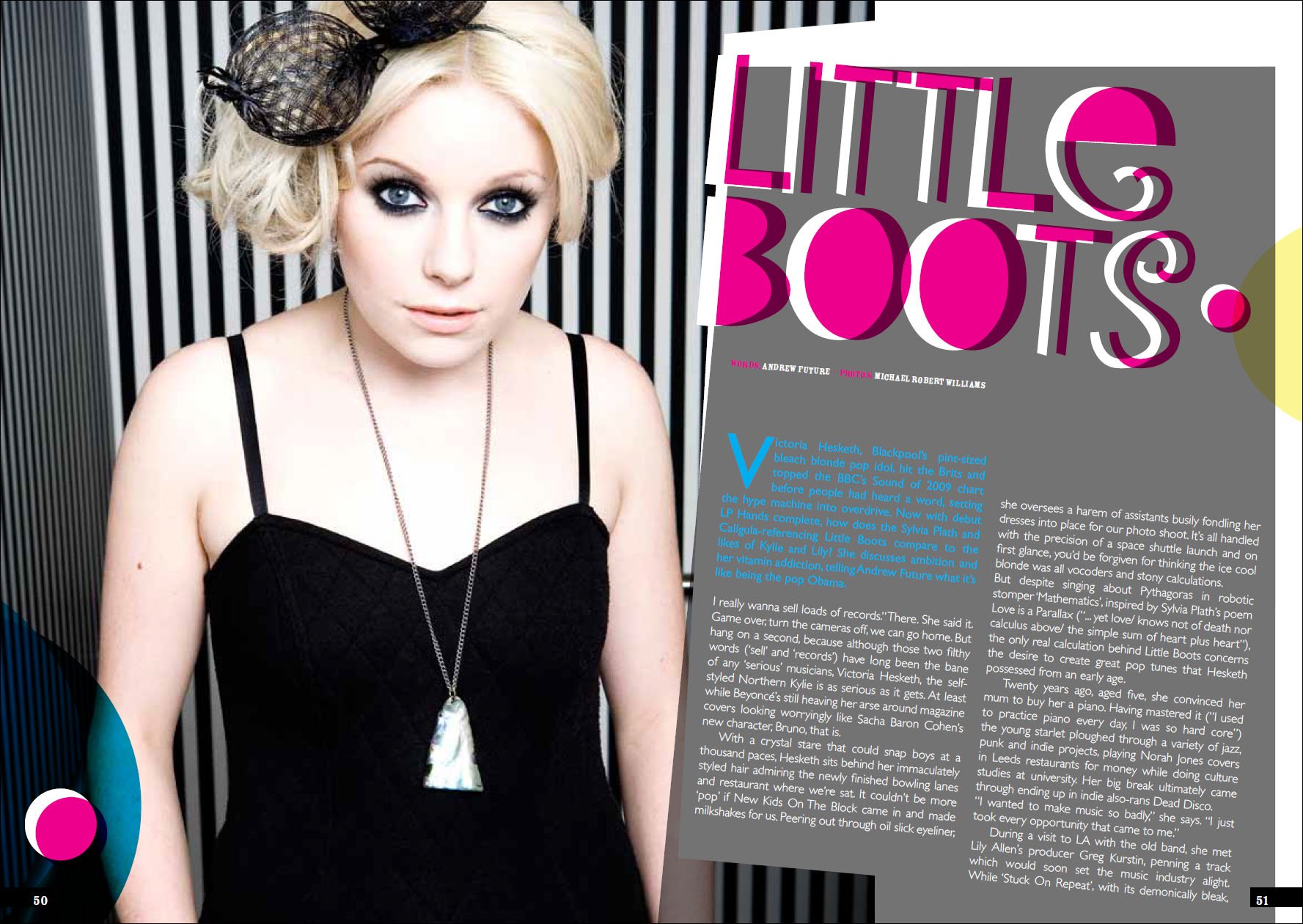 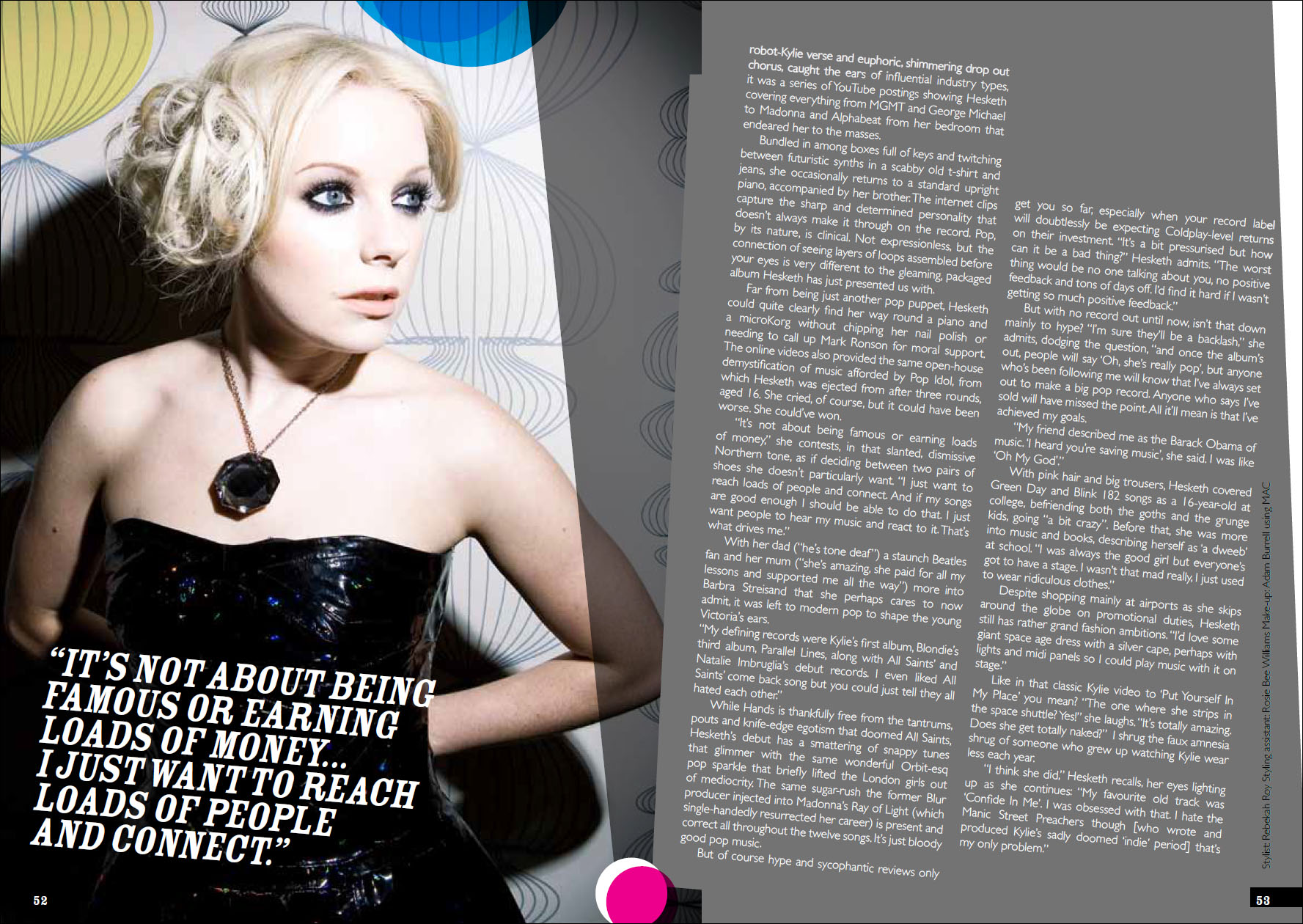 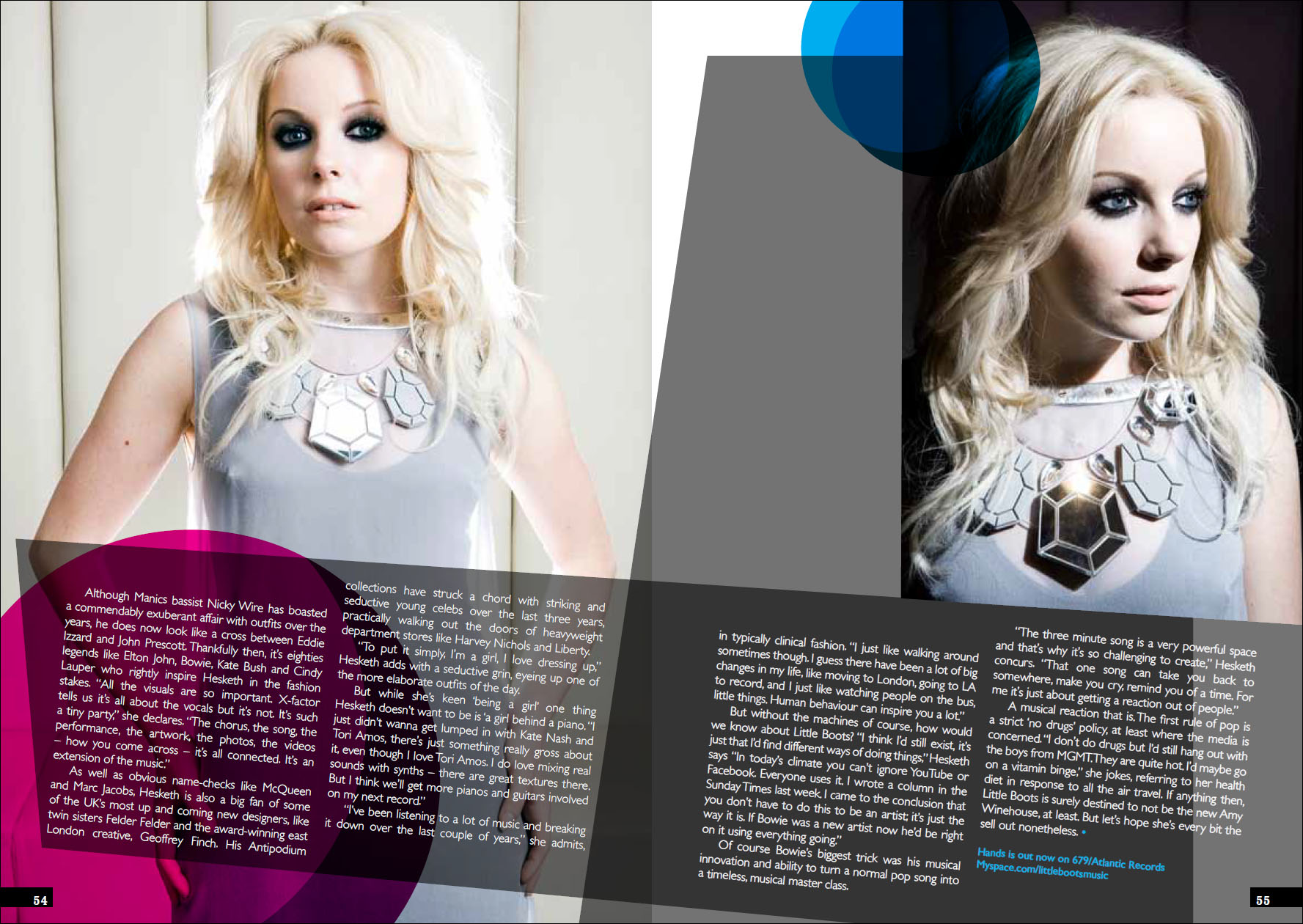 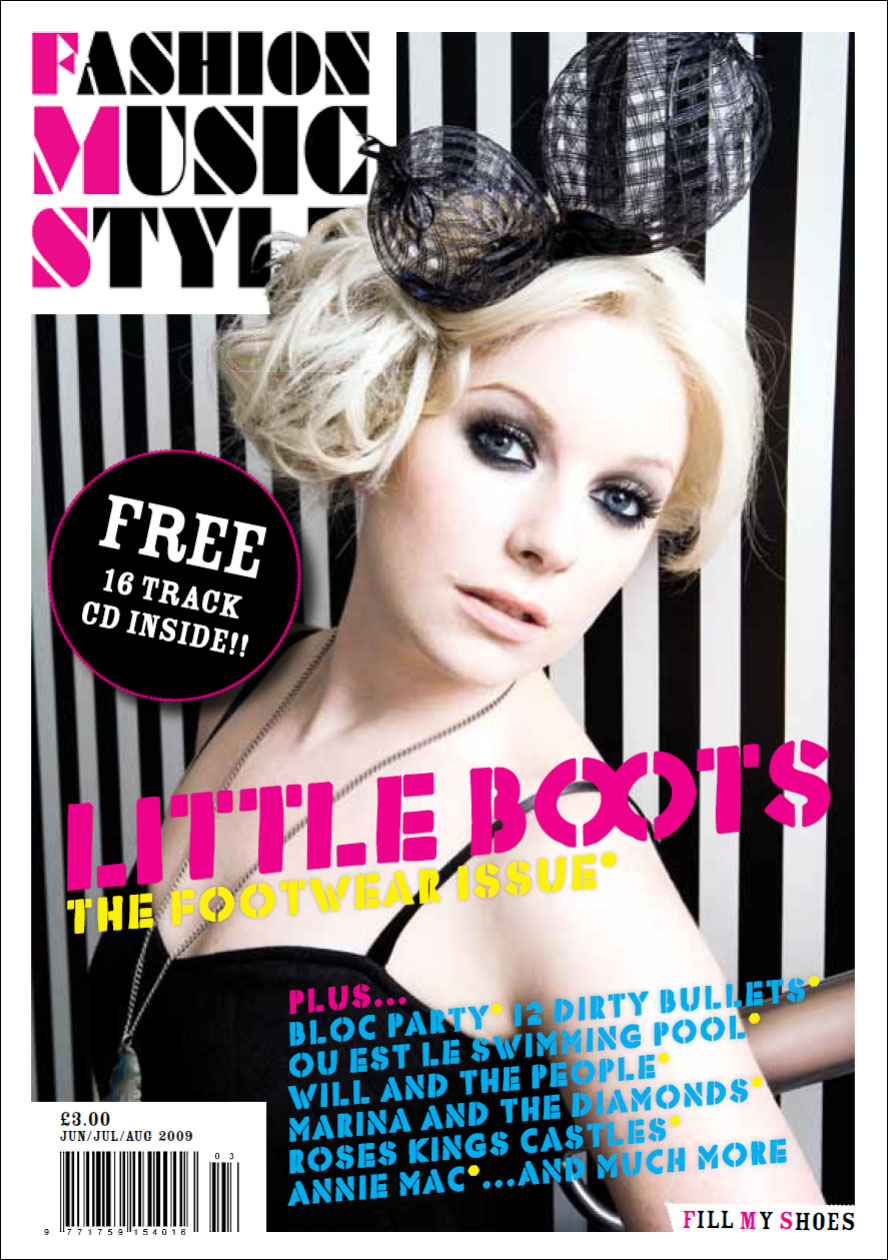 Victoria Hesketh, Blackpool’s pint-sized bleach blonde pop idol, hit the Brits and topped the BBC’s Sound of 2009 chart before people had heard a word, setting the hype machine into overdrive. Now with debut LP Hands complete, how does the Sylvia Plath and Caligula-referencing Little Boots compare to the likes of Kylie and Lily? She discusses ambition and her vitamin addiction, telling Andrew Future what it’s like being the pop Obama.

“I really wanna sell loads of records.” There. She said it. Game over, turn the cameras off, we can go home. But hang on a second, because although those two filthy words (‘sell’ and ‘records’) have long been the bane of any ‘serious’ musicians, Victoria Hesketh, the self-styled Northern Kylie is as serious as it gets. At least while Beyoncé’s still heaving her arse around magazine covers looking worryingly like Sacha Baron Cohen’s new character, Bruno, that is.

With a crystal stare that could snap boys at a thousand paces, Hesketh sits behind her immaculately styled hair admiring the newly finished bowling lanes and restaurant where we’re sat. It couldn’t be more ‘pop’ if New Kids On The Block came in and made milkshakes for us. Peering out through oil slick eyeliner, she oversees a harem of assistants busily fondling her dresses into place for our photo shoot. It’s all handled with the precision of a space shuttle launch and on first glance, you’d be forgiven for thinking the ice cool blonde was all vocoders and stony calculations.

But despite singing about Pythagoras in robotic stomper ‘Mathematics’, inspired by Sylvia Plath’s poem Love is a Parallax (“… yet love/ knows not of death nor calculus above/ the simple sum of heart plus heart”), the only real calculation behind Little Boots concerns the desire to create great pop tunes that Hesketh possessed from an early age.

Twenty years ago, aged five, she convinced her mum to buy her a piano. Having mastered it (“I used to practice piano every day, I was so hard core”) the young starlet ploughed through a variety of jazz, punk and indie projects, playing Norah Jones covers in Leeds restaurants for money while doing culture studies at university. Her big break ultimately came through ending up in indie also-rans Dead Disco.

“I wanted to make music so badly,” she says. “I just took every opportunity that came to me.”

During a visit to LA with the old band, she met Lily Allen’s producer Greg Kurstin, penning a track which would soon set the music industry alight. While ‘Stuck On Repeat’, with its demonically bleak, robot-Kylie verse and euphoric, shimmering drop out chorus, caught the ears of influential industry types, it was a series of YouTube postings showing Hesketh covering everything from MGMT and George Michael to Madonna and Alphabeat from her bedroom that endeared her to the masses.

Bundled in among boxes full of keys and twitching between futuristic synths in a scabby old t-shirt and jeans, she occasionally returns to a standard upright piano, accompanied by her brother. The internet clips capture the sharp and determined personality that doesn’t always make it through on the record. Pop, by its nature, is clinical. Not expressionless, but the connection of seeing layers of loops assembled before your eyes is very different to the gleaming, packaged album Hesketh has just presented us with.

Far from being just another pop puppet, Hesketh could quite clearly find her way round a piano and a microKorg without chipping her nail polish or needing to call up Mark Ronson for moral support. The online videos also provided the same open-house demystification of music afforded by Pop Idol, from which Hesketh was ejected from after three rounds, aged 16. She cried, of course, but it could have been worse. She could’ve won.

“It’s not about being famous or earning loads of money,” she contests, in that slanted, dismissive Northern tone, as if deciding between two pairs of shoes she doesn’t particularly want. “I just want to reach loads of people and connect. And if my songs are good enough, I should be able to do that. I just want people to hear my music and react to it. That’s what drives me.”

With her dad (“he’s tone deaf”) a staunch Beatles fan and her mum (“she’s amazing, she paid for all my lessons and supported me all the way”) more into Barbra Streisand that she perhaps cares to now admit, it was left to modern pop to shape the young Victoria’s ears.

“My defining records were Kylie’s first album, Blondie’s third album, Parallel Lines, along with All Saints’ and Natalie Imbruglia’s debut records. I even liked All Saints’ come back song, but you could just tell they all hated each other.”

While Hands is thankfully free from the tantrums, pouts and knife-edge egotism that doomed All Saints, Hesketh’s debut has a smattering of snappy tunes that glimmer with the same wonderful Orbit-esq pop sparkle that briefly lifted the London girls out of mediocrity. The same sugar-rush the former Blur producer injected into Madonna’s Ray of Light (which single-handedly resurrected her career) is present and correct all throughout the twelve songs. It’s just bloody good pop music.

But of course, hype and sycophantic reviews only get you so far, especially when your record label will doubtlessly be expecting Coldplay-level returns on their investment. “It’s a bit pressurised but how can it be a bad thing?” Hesketh admits. “The worst thing would be no one talking about you, no positive feedback and tons of days off. I’d find it hard if I wasn’t getting so much positive feedback.”

But with no record out until now, isn’t that down mainly to hype? “I’m sure they’ll be a backlash,” she admits, dodging the question, “and once the album’s out, people will say ‘Oh, she’s really pop’, but anyone who’s been following me will know that I’ve always set out to make a big pop record. Anyone who says I’ve sold will have missed the point. All it’ll mean is that I’ve achieved my goals.

“My friend described me as the Barack Obama of music. ‘I heard you’re saving music’, she said. I was like ‘Oh My God’.”

With pink hair and big trousers, Hesketh covered Green Day and Blink 182 songs as a 16-year-old at college, befriending both the goths and the grunge kids, going “a bit crazy.” Before that, she was more into music and books, describing herself as ‘a dweeb’ at school. “I was always the good girl, but everyone’s got to have a stage. I wasn’t that mad really, I just used to wear ridiculous clothes.”

Despite shopping mainly at airports as she skips around the globe on promotional duties, Hesketh still has rather grand fashion ambitions. “I’d love some giant space age dress with a silver cape, perhaps with lights and midi panels so I could play music with it on stage.”

Like in that classic Kylie video to ‘Put Yourself In My Place’ you mean? “The one where she strips in the space shuttle? Yes!” she laughs. “It’s totally amazing. Does she get totally naked?”

I shrug the faux amnesia shrug of someone who grew up watching Kylie wear less each year.

“I think she did,” Hesketh recalls, her eyes lighting up as she continues: “My favourite old track was ‘Confide In Me’. I was obsessed with that. I hate the Manic Street Preachers though [who wrote and produced Kylie’s sadly doomed ‘indie’ period] that’s my only problem.”

Although Manics bassist Nicky Wire has boasted a commendably exuberant affair with outfits over the years, he does now look like a cross between Eddie Izzard and John Prescott. Thankfully then, it’s eighties legends like Elton John, Bowie, Kate Bush and Cindy Lauper who rightly inspire Hesketh in the fashion stakes. “All the visuals are so important. X-factor tells us it’s all about the vocals but it’s not. It’s such a tiny part,” she declares. “The chorus, the song, the performance, the artwork, the photos, the videos – how you come across – it’s all connected. It’s an extension of the music.”

As well as obvious name-checks like McQueen and Marc Jacobs, Hesketh is also a big fan of some of the UK’s most up and coming new designers, like twin sisters Felder Felder and the award-winning east London creative, Geoffrey Finch. His Antipodium collections have struck a chord with striking and seductive young celebs over the last three years, practically walking out the doors of heavyweight department stores like Harvey Nichols and Liberty.

“To put it simply, I’m a girl, I love dressing up,” Hesketh adds with a seductive grin, eyeing up one of the more elaborate outfits of the day.

But while she’s keen ‘being a girl’ one thing Hesketh doesn’t want to be is ‘a girl behind a piano. “I just didn’t wanna get lumped in with Kate Nash and Tori Amos, there’s just something really gross about it, even though I love Tori Amos. I do love mixing real sounds with synths – there are great textures there. But I think we’ll get more pianos and guitars involved on my next record.”

“I’ve been listening to a lot of music and breaking it down over the last couple of years,” she admits, in typically clinical fashion. “I just like walking around sometimes though. I guess there have been a lot of big changes in my life, like moving to London, going to LA to record, and I just like watching people on the bus, little things. Human behaviour can inspire you a lot.”

But without the machines of course, how would we know about Little Boots? “I think I’d still exist, it’s just that I’d find different ways of doing things,” Hesketh says “In today’s climate you can’t ignore YouTube or Facebook. Everyone uses it. I wrote a column in the Sunday Times last week. I came to the conclusion that you don’t have to do this to be an artist; it’s just the way it is. If Bowie was a new artist now, he’d be right on it using everything going.”

Of course, Bowie’s biggest trick was his musical innovation and ability to turn a normal pop song into a timeless, musical master class.

“The three-minute song is a very powerful space and that’s why it’s so challenging to create,” Hesketh concurs. “That one song can take you back to somewhere, make you cry, remind you of a time. For me it’s just about getting a reaction out of people.”

A musical reaction that is. The first rule of pop is a strict ‘no drugs’ policy, at least where the media is concerned. “I don’t do drugs, but I’d still hang out with the boys from MGMT. They are quite hot. I’d maybe go on a vitamin binge,” she jokes, referring to her health diet in response to all the air travel. If anything, then, Little Boots is surely destined to not be the new Amy Winehouse, at least. But let’s hope she’s every bit the sell out, nonetheless.

Hands is out now on 679/Atlantic Records.

This feature was first published in Issue 03 of FASHION.MUSIC.STYLE, Summer 2009.