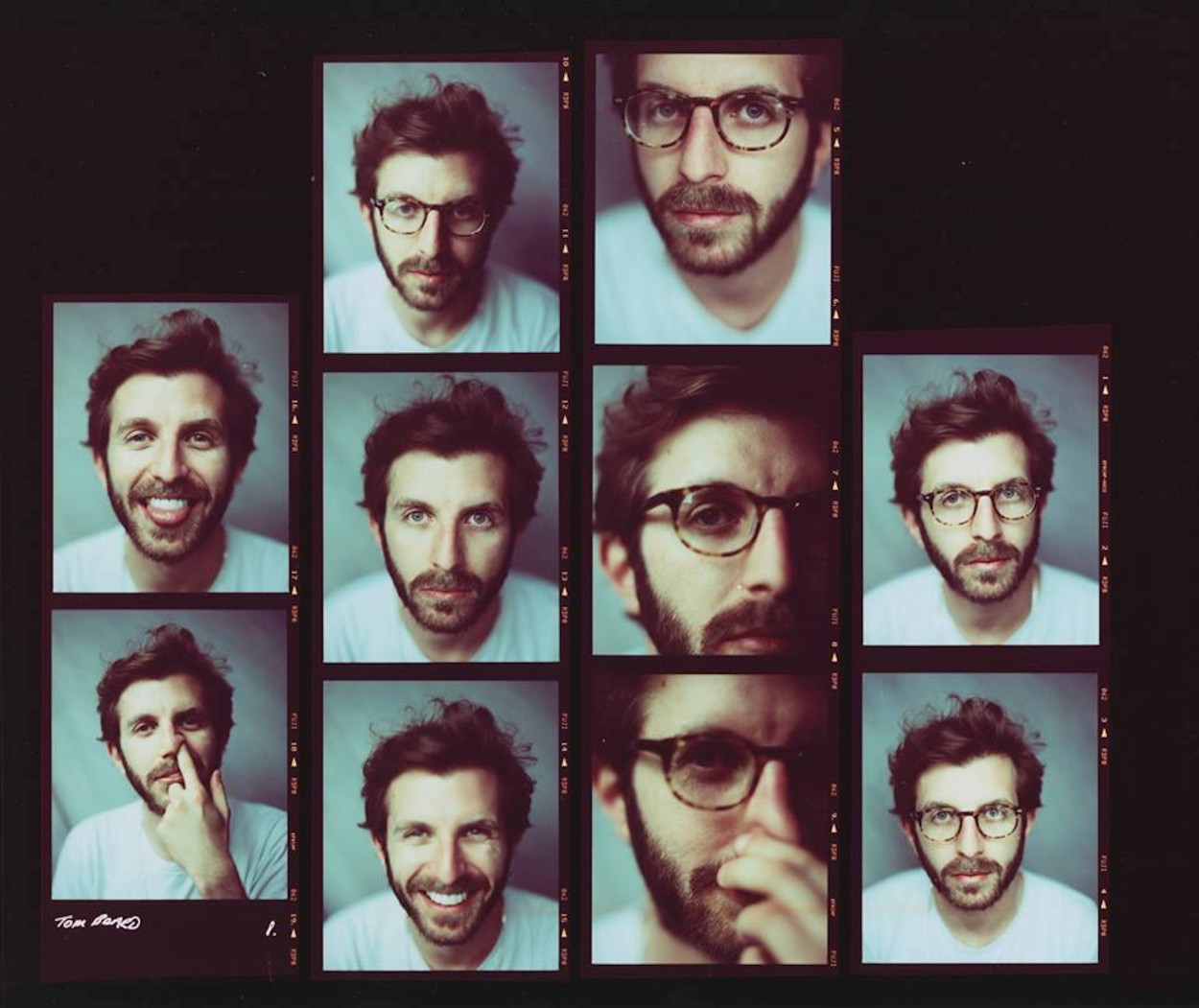 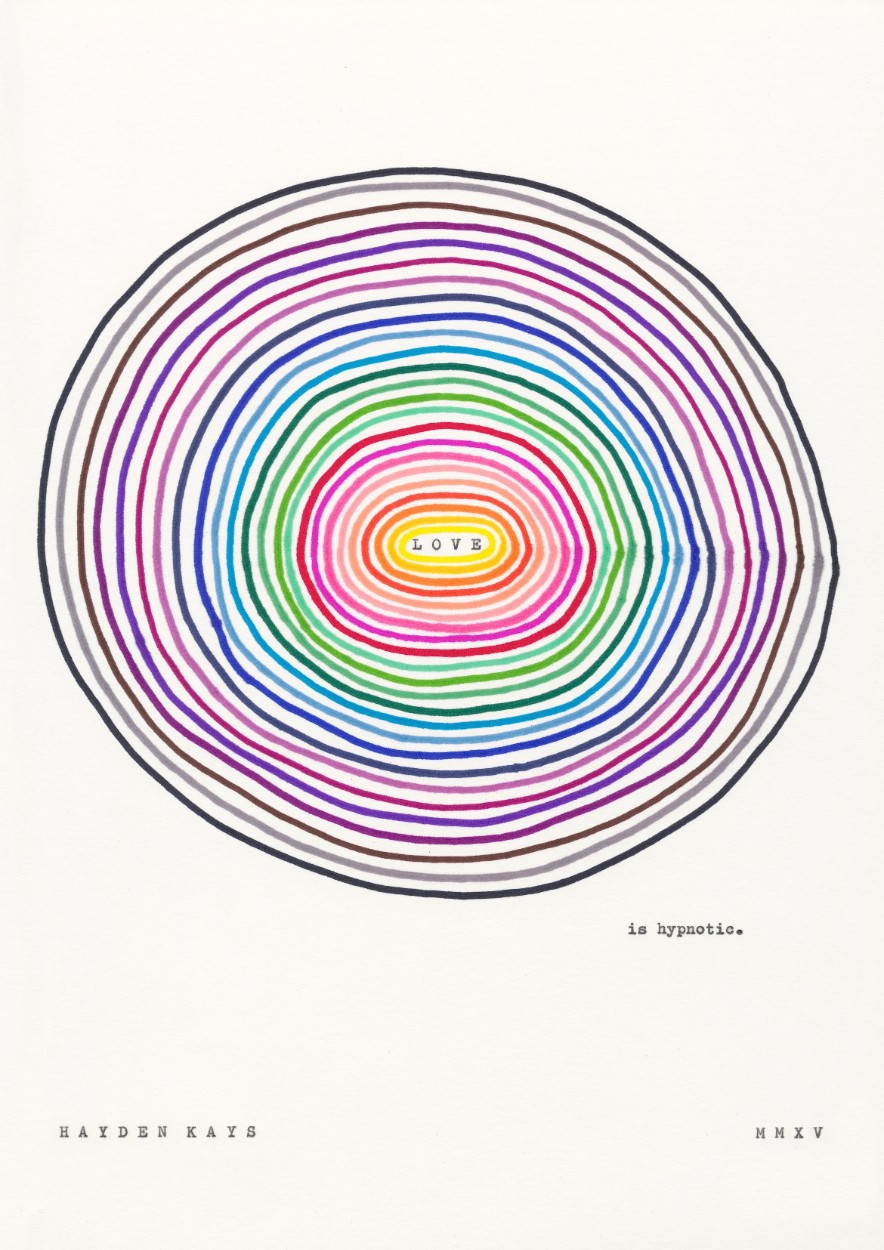 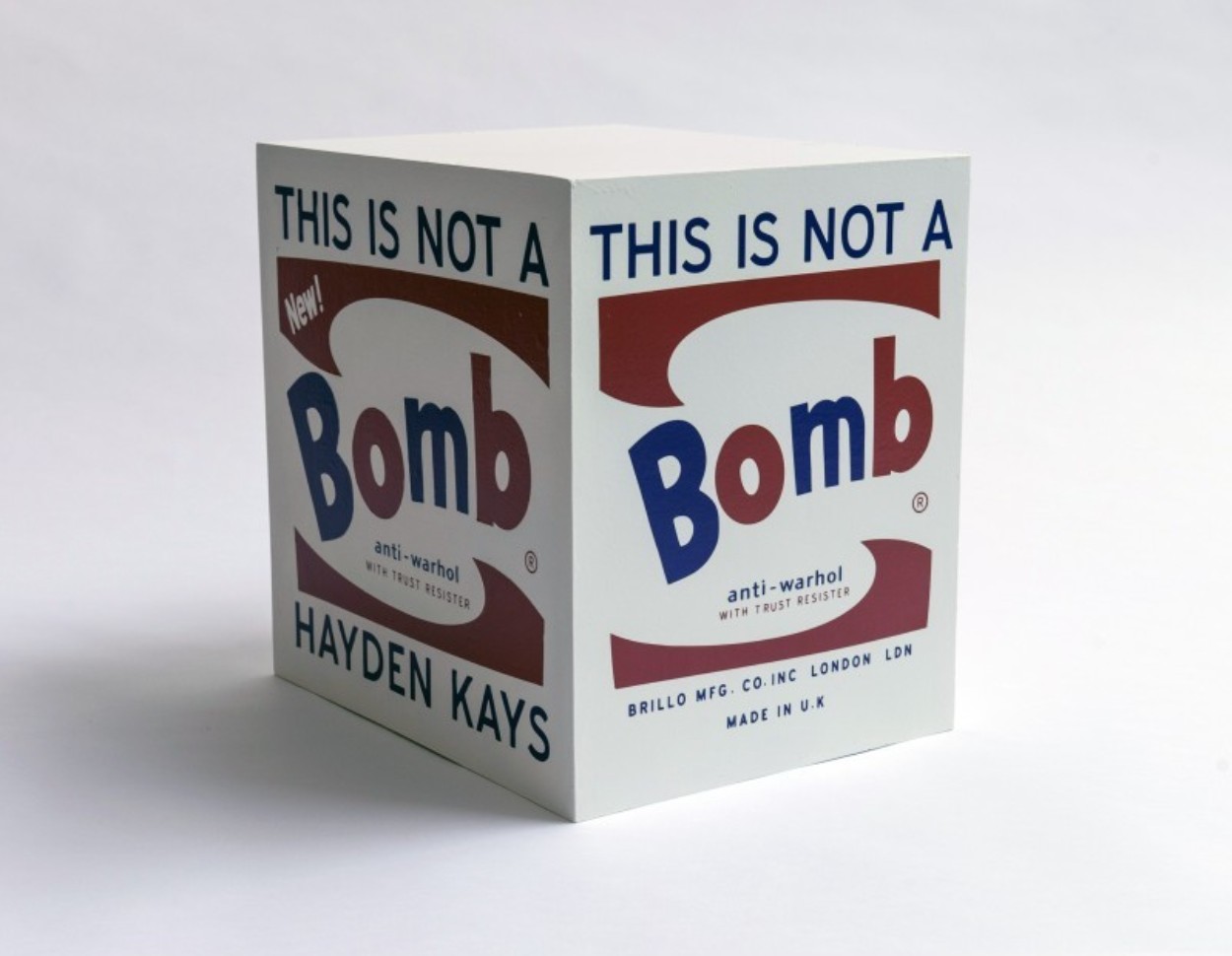 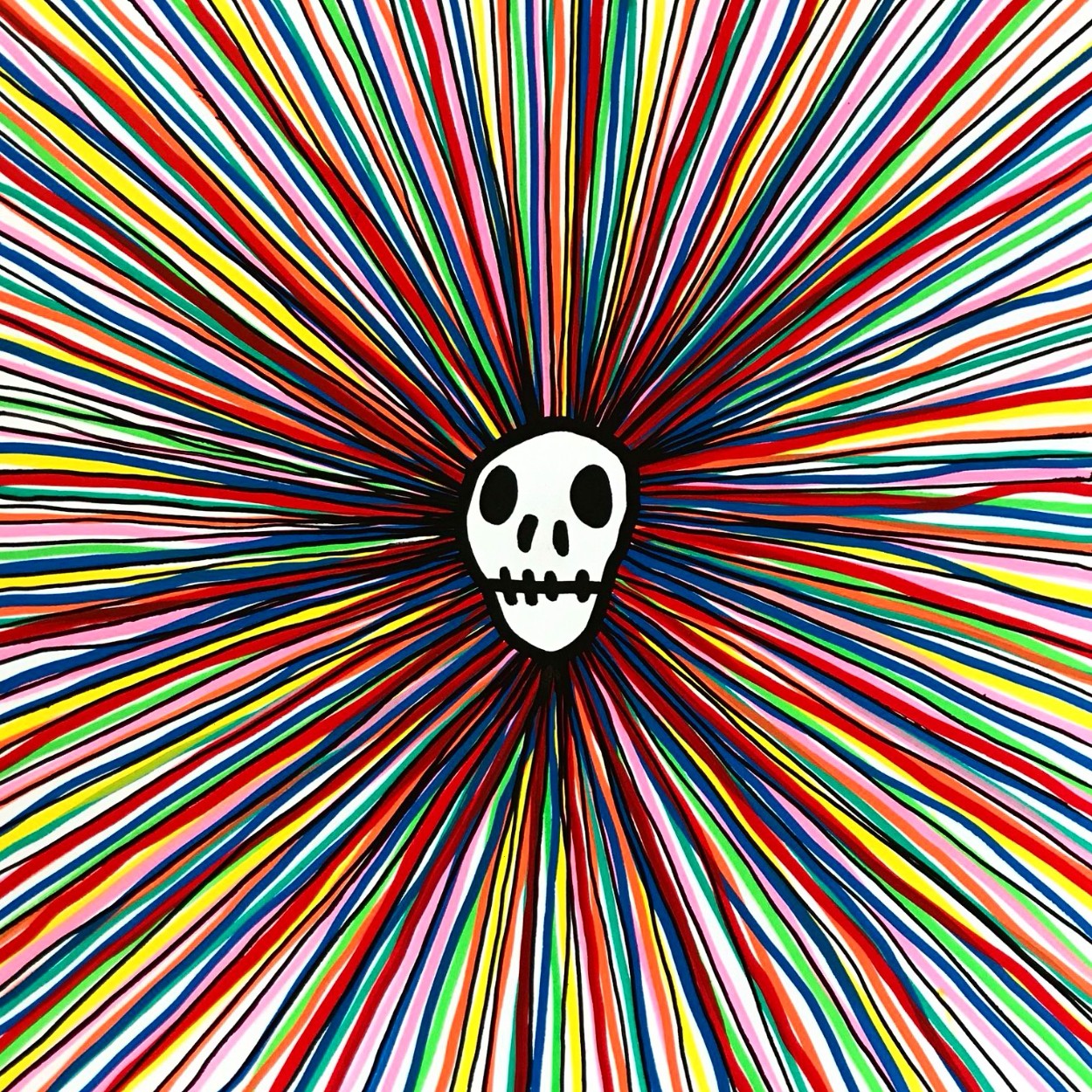 “I’m an artist. I paint, I draw, I sculpt,” states Hayden Kays, whose work is held in the private collections of such luminaries as Harry Styles, Jude Law and Jennifer Lawrence; enjoying international exposure from platinum-selling band The Kooks, who used Kays’ work ‘Sending My Heart’ as the cover artwork for their latest album.

“I’m somewhat of a rarity in London, in that I was actually born in Central London. I was born in Westminster in October 1985. The hospital I was born in is now a luxury block of flats. I’d love to own one, one day. I now spend my time between London and Margate. I’m very fortunate to be able to live two different lives.”

He describes his career path as ‘long and winding’. “I’ve always known I was going to be an artist. I’m possessed when it comes to making the ideas I play with in my head. I’d obviously love to be a rock star, but who wouldn’t??” 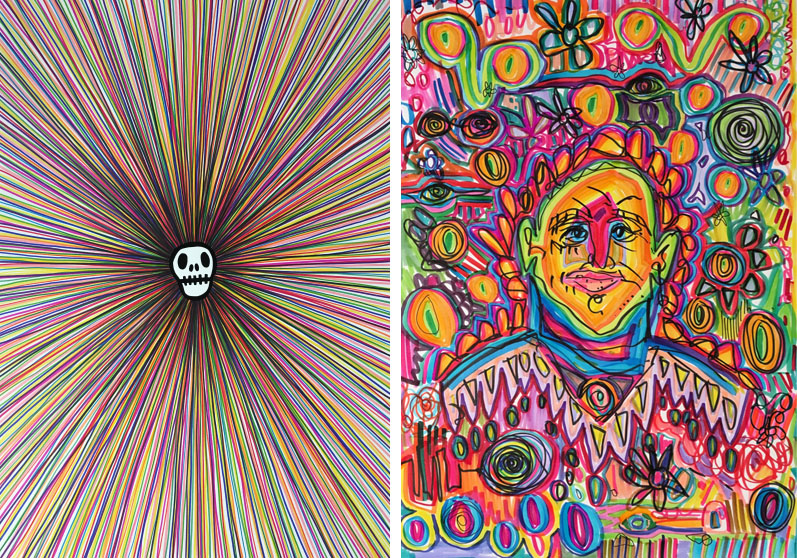 Kays’ work is characterised by bold imagery, often drawn from popular culture and art history, acerbic word-play, traditional craftsmanship and deadpan humour. Using everyday references and pithy witticisms, his work relates to and subverts the canon of the Pop Artists of the 1950s and the Young British Artists movement of the 1990s.

Touted as the YBAs heir for the street art generation, spearheading the evolution of the movement in the UK today, Kays’ hard-hitting messages, blur the lines between capitalism and culture, human sensibility and the machine age, catching the eye of patrons such as contemporary art bad boy and original YBA Jake Chapman.

“Making my first book – ‘Hayden Kays is An Artist’ was a fantastic moment. There’s still something very special about physical publication,” says Kays, on the highlight of his career so far, but he’s far too polite to name a few of whom he admires in the art world: “Too many to mention, and I wouldn’t want to offend anyone that I didn’t mention.”

As for the tools of his trade, “Anything that helps communicate the idea. I’m not wasteful and I’m very resourceful, I think having no money for years when you’re trying to make things forces you into a position to find another way.”

“Nearly three years ago I was asked to design the logo for an infant charity with the sole objective to ‘Help Refugees’. I’m extremely proud of my artwork being associated with such a wonderful and worthy cause.” …visit helprefugees.org 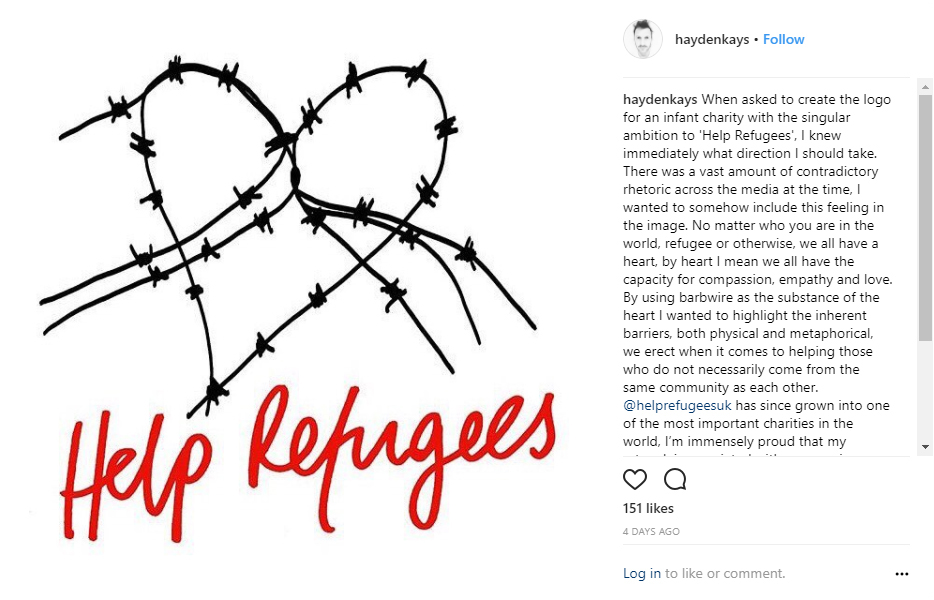 This Thursday, March 29th, sees the launch of Kays’ latest exhibition at For.Fuk.Sake on Dalston’s Kingsland Road. ‘Drink Drawings’ features 15 original artworks in an eclectic mix of styles and materials, all evoking the powerful emotions and hazy memories of drink-fuelled passion, joy, sadness and regret.

“Each one has been executed whilst under the influence,” says Kays. They are delivered in pen, pencil, pastel, chalk, acrylic – or whatever is to hand in the studio at the time – often amongst a sea of empty bottles. There will also be a limited print edition for each of the 15 originals.

Kays admits that his relationship with alcohol has occasionally helped him to express himself in a truly uninhibited manner – which has led to some of his most memorable nights, if only he could remember them. He has now captured this effect and combined it with his primary form of expression, art.

Using booze as a catalyst for creative inspiration Kays has produced some of his most open and revealing works to date – his trademark wordplay and love of puns are mixed with familiar references to the British and their unique drinking culture.

He claims we often see things with extreme clarity when drunk – and he has tested this theory by exploring inebriation every time he went into his Margate studio to let his booze-fuelled mind run riot – while his hands played catch-up. 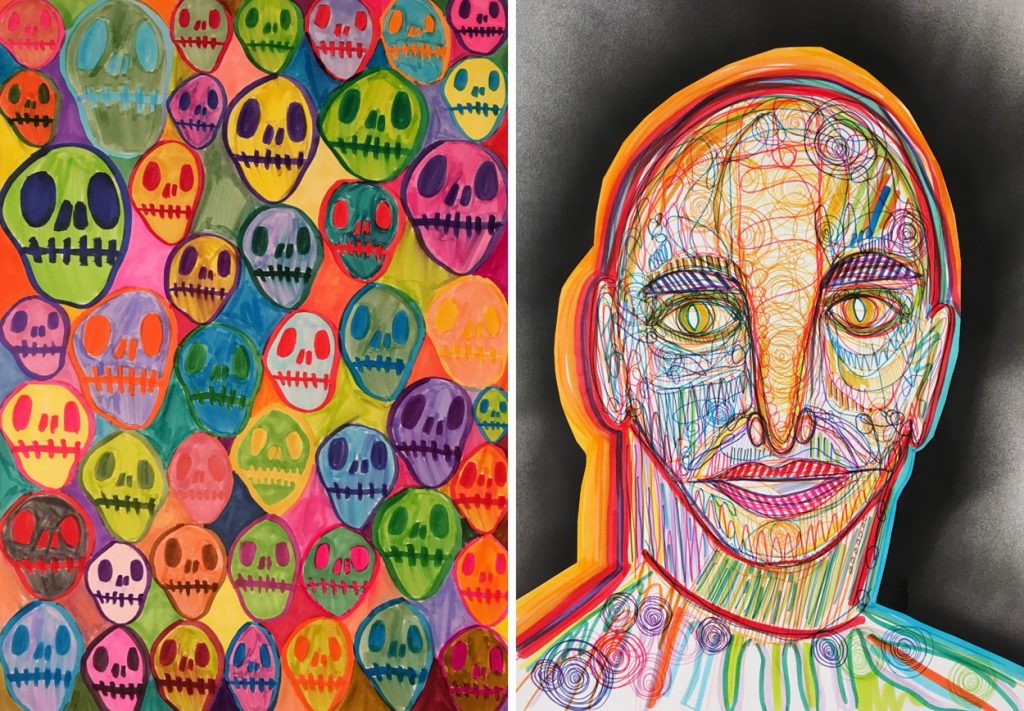 Kays joins a rich tradition between alcohol and artists. From Francis Bacon’s notorious binges in the drinking dens of Soho that were an enormous influence on his work. To the abstract artists of early 20th century Paris, expanding their minds on absinthe to help shape the surrealist and modernist movements.

For.Fuk.Sake is an intimate venue providing the perfect backdrop for Kays’ drunken artistic antics. It blends the two traditional aspects of Japanese nightlife – the finest sake in abundance on the ground floor and neon-lit chaos in the decadent basement below.

Kays work already adorns the walls of several infamous watering holes including The Groucho Club and The Boogaloo, “Sometimes work gets in the way of my drinking so I decided to make drinking my work for a while. I started drinking around the same time as I started making art. They’ve been bedfellows ever since.

“Drink has been the unsung hero for a lot of my work, inspiring me behind the scenes be it during the highs of a celebration or the brutal lows of a hangover, so I decided to make it the star of the show on this occasion. Give it centre stage and long overdue credit where credit is due.

“In Britain we drink to celebrate, we drink to commiserate and we drink when we’re bored just to start the cycle again, cheers.”

‘Drink Drawings’ is an Oli Goss Art exhibition, proudly sponsored by Old Blue Last Beer and Tengu Sake. On the opening night, those arriving early enough will be able to have their “pissed portraits” drawn live by Kays, provided that he hasn’t drunk too much… 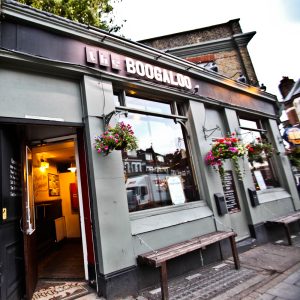 To Eat: I love Italian food, so where are you taking me?

To Drink: Boogaloo in Highgate is a perfect place for a pint or 6.

To Party: Boogaloo in Highgate is the perfect place for a party

To Walk: Anywhere I’ve not been before.

To Shop: Camden used to be my place, many moons ago. 90% of my shopping is online now.