This week, we meet songwriter and record producer, Louis Souyave, who runs Writing Rooms – a production company who write and produce music for commercial artists as well as for Film, TV and advertising. Writing Rooms have recording studios in Peckham and Bermondsey, and are also working on developing work spaces for freelance audio-visual professionals in the near future. Louis also works under the name ‘TALES‘ for various production and writing projects.

We find out what brought Louis to London, and all that jazz…

I had no choice in coming to London I’m afraid, I am a born and raised South Londoner. I’ve lived around the country but always get drawn back to Dirty South. I’ve been living in Peckham for the past three years which is evolving literally week on week… however, not necessarily for the better…

Oddly enough I wanted to be a lawyer as a kid, but to my parents’ horror, at 15/16 I fell in with a crowd that skewed my ambition towards music. I got a guitar from Argos (thanks, Mum!), started playing in bands, got some pirated recording software and started recording myself and friends mucking about with covers and comedy songs. That evolved a bit over the years and after doing seemingly hundreds of free gigs, people started paying me. I turn 30 this year and I’m still making a living from it, which I suppose means it’s going well.

I went to uni and was in a band called Daytona Lights during that time, just as I graduated we signed a record deal and started working with Steve Levine (Culture Club/Beach Boys/The Clash) on our first album. We ended up promoting the record by playing fictionalised versions of ourselves on Hollyoaks (of all places) and did what bands do for a few years. When we parted ways with Steve, I produced our next record (Old Fashioned Love) in a studio we built in my mum’s back garden, which we dubbed the Grotto. Sadly, the Grotto is no more, but it laid the foundations for what is now Writing Rooms. After the band split up, I blagged a job in a Soho recording studio as an in-house songwriter and producer. This was a baptism of fire, where we were expected to knock out five songs a day in an unspeakable number of genres. After a couple of years, I took on more freelance work and ended up leaving Soho and starting up my own place in Bermondsey, officially launching Writing Rooms.

At this moment I’m working on records for a few new artists, including Breen, Glint and Ashleigh Anita. This year so far has already been exciting, three new artists we’ve worked with in past months have started to make waves on BBC Introducing and beyond. We’ve been sworn to secrecy, but we can say that there is something incredibly special happening with one of our acts in the near future. Also, there is talk of a publishing deal on the horizon for me, which would be a helpful boost.

Everyday is different, depending on what project I’m working on. On any given day, I might be writing bespoke music for an advert or producing and arranging a song brought to me by one of my artists. Within that there are infinite tasks I could be getting up to day to day, from session playing, writing, mixing to editing (to name a few). There is a common misconception that songwriters sit around all day waiting for inspiration to strike…. this is bollocks! Years ago I read that Paul McCartney would go to the studio every day, Monday to Friday, and write, regardless of whether or not it was for a specific project. I took this to heart and figured if it worked for Macca, it’s certainly good enough for me.

My laptop, my three hard drives (filled with projects, samples and miscellaneous weird sounds), my NS-10s, Fender Strat and my Juno 60. Most importantly though, are my ears! In production, debates always rage surrounding which tools are the best for what purpose, however I’m a believer in getting to know the tools you have and learning to get the best out of them.

Link us to something that you’ve created…

I think the best place to start is my website WritingRooms.co.uk. There’s a wealth of music to get your ears around there, in particular I’m really proud of a strange little record I made with a vocalist named Felicity Abbott last year. That can be found on my ‘TALES’ Soundcloud page.

What’s been the highlight of your career so far?

I’m always hesitant to identify highlights as I feel the best is yet to come!

The current industry people I admire mostly would be producers and writers, such as Nile Rodgers, Jamie XX, Gregg Wells, Mark Ronson and Jimmy Napes. However, on a personal level I particularly admire Paul Epworth who I’ve followed since his early work with Futureheads and Bloc Party. He essentially soundtracked my early 20s. I love that he produces records that straddle that line between great pop and great alternative indie. I know that’s partly the artists he works with, but his role shouldn’t be understated. He has a deep understanding that the song comes first and the production frills come second, and I feel that comes through as honesty in his records. 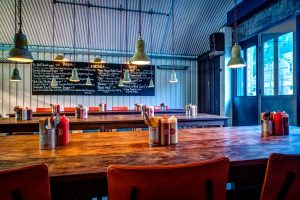 To Eat: Patty and Bun

To Party: Getting old, so probably my kitchen and front room