Dabbla, the latest signing to High Focus, releases his debut album, Year of the Monkey, later this month – a record bristling with energy, humour, honesty and a strong dose of hip hop purism.

Lead single ‘Stupid’ perfectly encapsulates the spirit of the record – the high octane flow of Dabbla, the bass-heavy production, punctuated by crisp hand claps and a lyrical call to arms. Prior to this release, Dabbla had performed in a range of crews and groups, including LDZ, Problem Child and Dead Players, but this is his first proper effort as a solo artist. With its reggae inspired beat, ‘Stupid’ also positions itself firmly in the lineage of UK hip hop, building on the work of London Posse and Roots Manuva in particular.

Dabbla comes across as a scholar of MCing and hip hop, with a real passion for the art. With beats influenced by everything from boom bap to Timbaland’s futuristic stomp, the production is at its core classically British and provides the platform for Dabbla to demonstrate his vocal control and range. Production is handled by Tom Caruana, Chemo, Ghosttown and Naïve amongst others. It is also clear that Dabbla and his collaborators did not feel the pressure to follow any trends. Right from the opening track Dabbla appoints himself as a defender of the cause as he raps “come we resurrect that we shit fell in love with, but not popping stupid bottles in the club bit, hip hop is on some mug shit.” The rejection of materialism and desire to follow fashion is a recurrent theme throughout the record, and the skit at the end of ‘PterdactILL’ criticises those who abandon their sound to pursue the latest trend.

Elsewhere, Dabbla is capable of being the joker and an aggravator. His delivery and content transitions with ease from serious storyteller to self confident challenger with detours into shock rap, and he is not afraid to use vulgar and incendiary lyrics to incite a reaction, typified by ‘Vomit’ and ‘Psychoville’. The most high profile artist this brings to mind is of course Eminem, but there is a rich tradition in hip hop of the joker character, with Busta Rhymes and Foreign Beggars other contemporaries. There is even space for some emotional depth on ‘Butterfly’, with its soft rock inspired production demonstrating a creative openness and willingness to embrace new ideas. There is a sense that Dabbla is playing catch up sonically across the course of the album, and the references to Dubstep being the ‘hot’ genre seem a little outdated, but this may be testament to the time that has been invested into making this record. Ten years in the making, Dabbla has described this record as his ‘opus’ as he has gone through a long drawn out process to reach this point and this investment is clear across the 17 tracks.

The record features many of High Focus’s established acts, with Jam Baxter, Dirty Dike and fellow Problem Child member Dubbledge contributing. It also features another previous collaborator, Ocean Wisdom, who possess a similarly high energy, double time flow and they play off each other on album standout ‘Get It’ that brings to mind the Foreign Beggars/Skinnyman classic, ‘Hold On’.

Whilst the content may alienate some and not every track hits the mark, The Year of the Monkey is a strong debut release, carried primarily by the charisma and vocal dexterity of Dabbla himself and complemented by some strong production. Much like Edward Scissortongue’s recent release, Year of the Monkey is further evidence of the vibrancy of the underappreciated UK hip hop scene, with High Focus in particular enjoying a stellar year.

Dabbla is performing at the High Focus Block Party at Lakota in Bristol on 27 August alongside Fliptrix, Ed Scissor, Ocean Wisdom and others. Tickets are available HERE.

Year of the Monkey is released via High Focus on 9 September – pre order the album HERE. 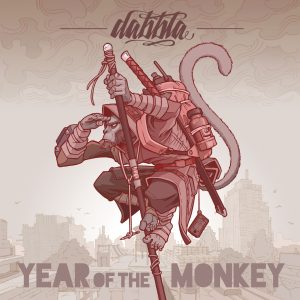