Descendents return with their first album since 2004’s Cool To You, Hypercaffium Spazzinate, an album three years in the making and packed with grown up angst set to the high energy drumming, tight musical interplay and riffs that the band have been producing for over 30 years.

The punk rock luminaries returned with ‘Victim Of Me’ last month, which was accompanied by a live video, shot on April 20th, where Descendents performed their first South Bay Area show in 20 years, at the intimate The Standing Room in their hometown, Hermosa Beach, California.

Much like Cool To You and Everything Sucks before it, there is a sense of maturity throughout the album, and lead singer Milo Aukerman has talked of the power the record had to provide the band with an outlet for their frustrations, a freedom to clear their minds. This is not the same youthful band that formed in 1978, although they have barely diverged from the musical formula previously established. Lyrically, however, much of the angst, humour and vulgarity remains. ‘On Paper’ comments on social awkwardness and romantic rejection, ‘Human Being’ is infused with anxiety, whilst ‘No Fat Burger’ is seemingly humorous track but underlain with a darker message.

The whole album demonstrates a slowly evolving world view for the band. Indeed, these moments sound more befitting of a band of their experience. On ‘Limiter’ they flip the narrative and turn social commentator, looking at the over-prescription of ADHD medication and the damage it causes. ‘Testosterone’ is a tale of the workplace angst Aukerman felt working as a microbiologist at DuPont, struggling with the egotistical characters around him. ‘Feel This’ looks at the societal pressure bassist Karl Alvarez felt under to feel a certain kind of emotional pain following the death of his mother. The whole band continue to contribute to the songwriting, giving the sense the album was a cathartic process for all involved. ‘Smile’ sees Aukerman offering a pep talk to help drummer Bill Stevenson, who has struggled with several major health problems. Unsurprising for a band who have been together so long, completed by Stephen Egerton on guitar, there is a real sense of companionship, best symbolised by album closer and career retrospective ‘Best of Memory’.

Aukerman also sounds as impassioned as before, but deprived of some of his grit and aggression. In its place comes greater range, with an increase in softer choruses and more mainstream melodies, seen on second single ‘Without Love’, with it’s rooving bassline, and ‘Comeback Kid’. Whilst the band are now into their fifties, they continue to prove they haven’t lost any of their passion for making music, and the influence cast by Descendents, both on those clear successors such as The Offspring, Blink-182 and Green Day, as well those numerous other acts who have paid tribute to them, should continue into another generation.

‘Victim Of Me’ and ‘Without Love’ are out now and Hypercaffium Spazzinate is set for release on July 29th via Epitaph. 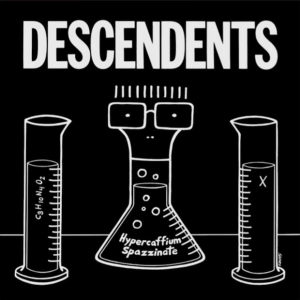