Emberhoney has released a 1940’s Film Noir inspired video, ahead of her final gig for 2016 at The Dublin Castle, in London this eve.

‘Some Kind Of Alchemy’ is a pensive affair, combining cinematic strings with melancholic vocals and lyrics of existential angst.

Elements of Tim Burton, David Lynch, and Fritz Lang’s Metropolis, are thrown into the video for good measure, as singer-songwriter, Taylor Madison Damion, drawls, “Tiptoe through the tombstones/A graveyard in my head/I could grieve forever/The child in me is dead/But you give me love to live for/Bring me back to life instead…”

Emberhoney has drawn comparisons to Nick Cave, Agnes Obel and Anna Calvi for her mesmerising live performances on piano and guitar. Her debut EP, Smoke, achieved multiple spins on BBC 6 Music following its release in 2015, winning praise from multi-award winning composer, Sir Tim Rice, and a commission to write the theme song for a stage show in New York.

Her popular cover of Nick Cave’s ‘Into My Arms’ is available for free download HERE.

Forthcoming EP, The Ghost in the Machine, is set for release in spring 2017.

‘Some Kind Of Alchemy’ is out now. 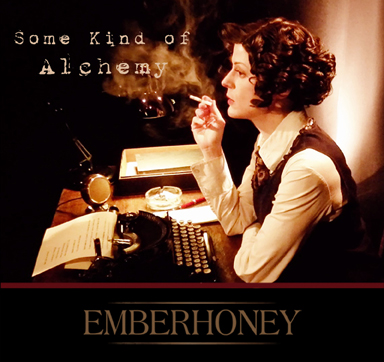