After a truly stellar year for High Focus Records, label founder and managing director Fliptrix looks to finish 2016 on a high, with the release of his sixth album, Patterns of Escapism; a thought- provoking and introspective exploration of the human psyche. Produced exclusively by Illinformed and featuring some of High Focus’ finest, including the rest of The Four Owls, Ocean Wisdom, King Kashmere, Life MC, and DJ Sammy B-Side, the record is testament to the strength of the label and UK hip hop today.

Created over a three year period, it is firmly grounded in the aesthetics of British underground rap, the scene that Fliptrix has helped to spark back into life, ever since the release of his debut album in 2007. 2016 has been no different, with The Four Owls having embarked on a tour across Europe and Australia and releases from Dabbla and Ed Scissor enjoying critical and commercial success.

Patterns of Escapism is packed with Fliptrix’s trademark wit, forward thinking and original outlook. Album opener, ‘Circadian Rhythms’, introduce the key themes of the album, as it discusses the biological cycles of life and how wider influences are disrupting and redefining these cycles. It is set to the kind of dusty, jazz and soul influenced beats that define Illinformed’s work and the production standard across the record is incredibly high.

‘Astral Plaining’ follows and, like much of the record, is a great reminder of the technical brilliance of Fliptrix, as he creates dense collages of words, seeking to fill every space with his smooth, intoxicating delivery. Across the record there are explorations of social issues and the pursuit of a better understanding of the self, as seen on the title track, ‘The Poltergeist; and ‘The Lion’s Den’. As Fliptrix explains, “The music I make is all about the depths of self-exploration and the heights of human consciousness. Even though the world can be ugly, I try to bring positive vibes. Everyone in this world seems to want to escape their reality in some way and there are various means, both positive and negative, in which this can be done. Patterns of Escapism explores the correlations between these and takes the listener into an immersive journey through my mind, experiences and outlook on life.” The culmination of this message is ‘Spread Peace Around’ at the close of the album.

Lead single, ‘The Chronic’, in contrast is relatively light hearted, a feel good reintroduction in a similar vein to the classic, ‘Wylin Out’. There are other similar tracks, including ‘That’s You’, a Four Owls collaboration, which brims with confidence and energy, as Fliptrix grows comfortable with his successes and calls out the competition. However, it is the more lyrically expansive tracks that hold most interest, including the latest single, ‘Thunder Clouds’. The track seems to be a statement of intent for the High Focus team, as Fliptrix raps, “Grappling for pieces of the puzzle in the cold, yet I never wear a muzzle when the truth must be told.” In the context of the tumultuous year we have had it is artists like Fliptrix, who are not constrained by major label pressures or chart expectation, that are capable of delivering challenging and engaging records, which may not always embrace the major issues head on but prove that there is still space for creativity to flourish free from prejudice.

‘High Focus’ is an opportunity for Fliptrix to reflect on the progress he has seen and the pride he takes, alongside Verb T and Dabbla, in the approach they have taken to pursuing a career in music. Patterns of Escapism  is a testament to that unerring faith and the huge impact he has had on British hip hop in the process.

The album release party is being held at Brixton Jamm on 10 December 2016 and features some of the High Focus roster, including newest signing Strange U, alongside veterans such as Task Force. It promises to be a fantastic evening of UK hip hop and tickets are available HERE.

Patterns of Escapism is released on 25 November 2016, preorder available HERE. 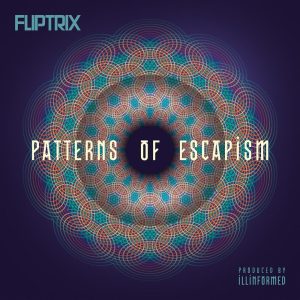