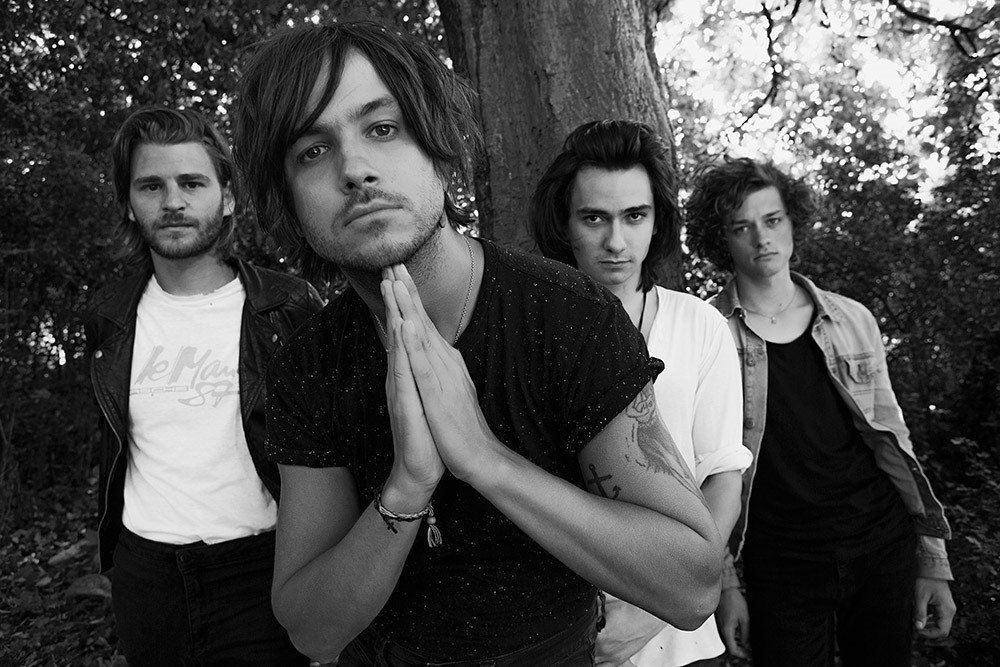 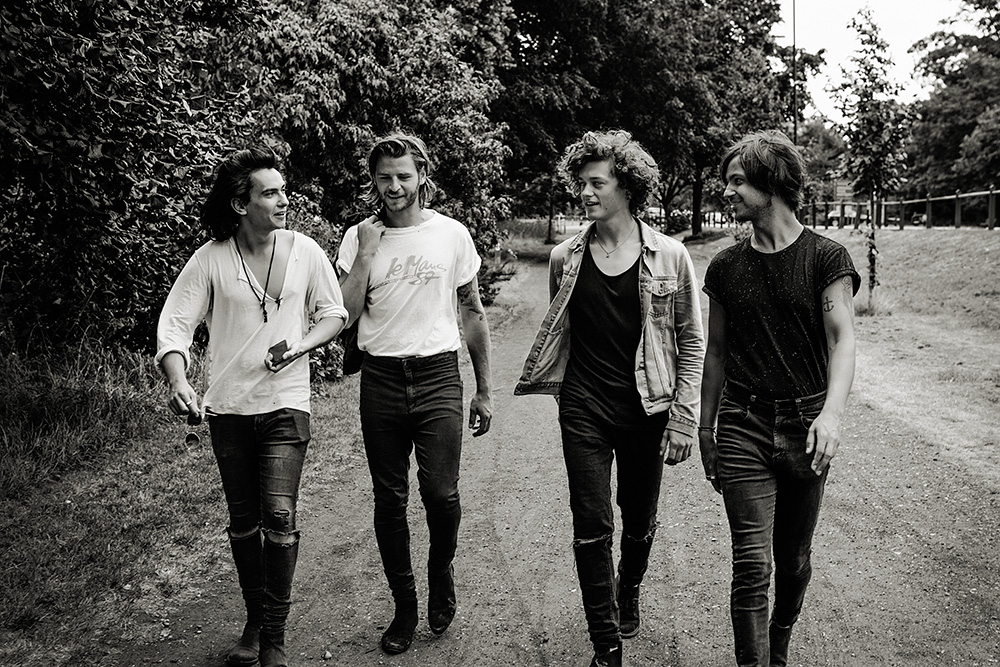 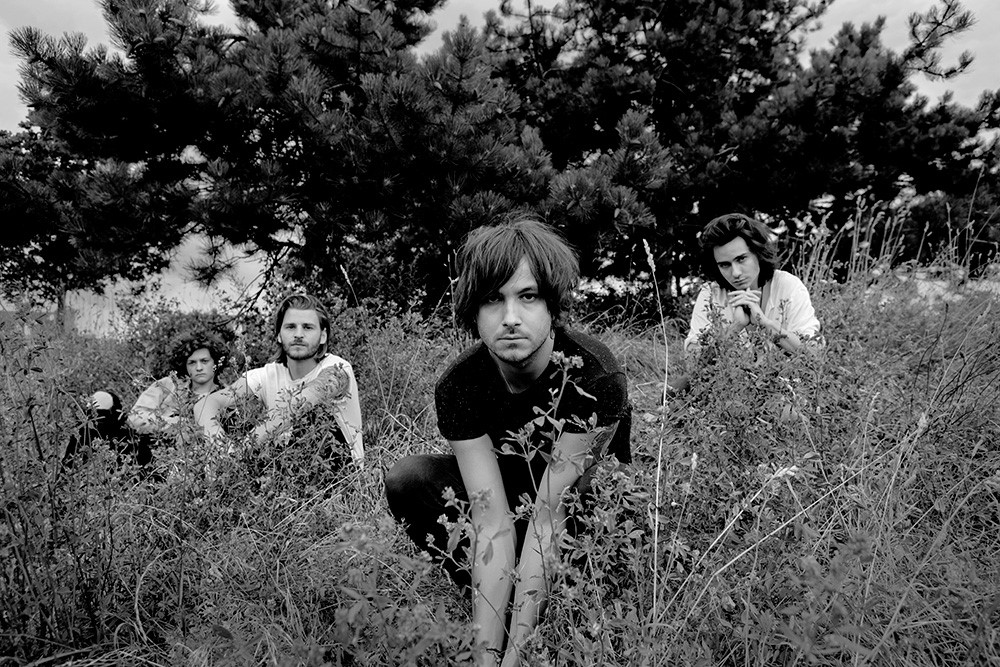 From a windowless cotton mill in Manchester to the sunny streets of LA, things are certainly looking up for the band named FACE, as they bring their blend of pop-rock anthems to the masses. Signed to Warner Music/AOA, and set to release their second EP in the New Year, this serendipitously formed foursome are definitely ones to watch.

Glaswegian-born David Arthur (vocalist) and fellow songwriter, Matt Kern (bass), first met in a North London pub, after discovering they were dating the same girl, “She cheated on me with him,” tells Kern. “She’d been doing that for a while, and that was the first time I saw him. I just saw his picture. I knew who he was and in my mind I see this guy and think, ‘I’m going to hurt him.’

“I don’t know what I was doing. I’ve never been in a fight in my life. And then I saw him and he just seemed like a decent guy.”

“She was sort of playing the both of us, really,” adds Arthur, who’d been none the wiser, but they soon ditched the girl in a truly British manner. “We got fish and chips and started a band,” says Kern, going on to explain how they’d immediately bonded over music and then ‘kind of forgot about the whole thing’. “I ended up recording some of his acoustic songs, and that was it.”

Arthur already had a bunch of songs, and Kern – who was mostly working as a session musician at the time – had done some audio engineering and was keen to record new bands and new people. “When I ended up recording some of Dave’s stuff, we ended up just changing it a lot and writing stuff, and we just thought, actually this is kind of working, as in writing, as opposed to me just recording it. So we just started with that.

“I didn’t have one thing I was really focused on until I met Dave, and he was just like, ‘Come on, man, let’s just start the biggest band in the world. Let’s just do it properly.’ I was like, fuck, okay.”

“The first track you guys wrote was ‘Devil’, right?” asks guitarist, JC, who joined the band after they’d signed to Warner’s at the backend of 2015. “Yeah, it’s actually going to be on the [next] EP, the first song we ever wrote together,” answers Kern. It’s also the first and only song they’d posted on SoundCloud, before that fateful first gig at The Black Heart in Camden… where they scored their manager, Duncan Ellis, and everything fell into place.

“We put everything into this one show,” tells Arthur, who had been living in a pretty bleak situation with Kern in Manchester, where they resided in the basement of an old cotton mill. Unable to afford their London rent, the pair had relocated North to focus on their music, “When we were living there, we literally had no money,” Kern explains. “And we were living in this really awful… we were living in a rehearsal room, with no windows.”

“Got some fond memories of it, though,” adds Arthur, ever the optimist, describing it as ‘the greatest city.’

“It was great for our music, because it forced you to kind of get stuff done, and want to get out of there,” continues Kern. With that in mind they set about recording demos to send to industry folk, inviting them down to the only show they could afford to do in London. Ellis heard about the band through mutual friends and knew they were looking for a manager, “We just made a whole lot of demos and sent them around to people, and Duncan was one of the guys that picked up.”

“We had a good response from those tracks,” adds Arthur, validating their creatively rich but cash poor existence up north.

“When you look at what he’s done, it’s pretty amazing,” says drummer, Slim Gabriel, who dropped the E from his Turkish name (Selim) to make it more pronounceable in the UK, “Especially since he’s quite young for a manager. We’re lucky to have quite an amazing team around what we do.”

Gabriel independently moved to London at the age of 18, “It was a complete no brainer. I didn’t even think twice about it. It was just really obviously the right thing to do. […] I was brought up in Istanbul, which is where I was born. I come from quite a mixed background. My dad’s Turkish Cypriot and my mum’s German. And then I started to get really serious with drumming when I was about 11; became completely obsessed with it. I knew that I couldn’t really do what I wanted to in Turkey.”

He’d been doing a lot of session work, when he heard the band were looking for a drummer through a guitarist friend, but insisted on hearing their music before moving forward, “All the songs that I heard, were just so huge, and just happened to be exactly what I would write, if I could. So, that was a no brainer as well. I went to go meet the guys and it was just really natural.”

It was through a chance meeting with Gabriel that JC came on board, “It was so weird, I was stood outside Ronnie Scott’s for literally five minutes,” says JC, who’s mate had bought him tickets to see Lee Ritenour. Gabriel mentioned they were looking for a guitarist and JC was keen to say the least, “Because I knew how amazing Slim was I went away and was like oh fuck, I’ve gotta get this job… I’ve gotta get this job.”

“It was complete chance, though, complete chance because I think I’d met him, but hadn’t really remembered,” explains Gabriel, who invited him down for an audition. “Just recognised him, and this was around the time we really were looking for a guitarist.”

“Jack turned up six hours early,” remembers Arthur. “Absolutely smashed it,” adds Gabriel. “He was there before we were.”

“I didn’t get the slot time,” explains JC. “I was there until the end as well.” But this only made it all the more obvious that he was their guy, explains Kern, “The fact you were just sitting there, and people were coming and going and you were there on the bench, listening to everyone.”

“It’s weird, because when you think about how the whole thing came together. All the way back to how they met. It’s all so lucky. That it all feels like there’s no real effort,” says Gabriel, explaining how naturally the band seemed to come together.

The foursome are now working in their ‘dream scenario’ with multiple Grammy-winning producer, Stuart Price (The Killers, Everything Everything, Coldplay), who is not only helping them fulfil their potential in the studio, but has also made them the first signing to his new Warners-affiliated label, AOA, “He started a label for us because he loved our songs and had been waiting to find a band that he could do that with,” tells Arthur. “We want to make really fucking great pop songs together.”

“I think something that got me,” says Gabriel, speaking of their experience working on their debut EP (Fear, June 2016), “When we were working with him in the studio he had this spur of the moment approach to creativity, so he’d work on one song here, and then work on another one, and come out with something that you couldn’t even possibly dream of, and he seemed like he was doing it in quite a jovial fashion. It wasn’t like it was taking up all of his concentration space. It just seemed to be that thing that was in his head, and he’d somehow just manage to synthesise it into a sound. And it’s come out, and it’s exactly what it needs. You know, that breakdown and change and stuff like that…”

“Yes, his sounds,” agrees Kern. “He’s really great at that. He’ll get on his laptop and come up with some really awesome organic sounding synthesis and sounds, and that’s something we can’t do. That’s something you’ve got to be really into, massively into the synths. Because you can’t just use a pre-set, chuck it in your songs, it kinda sounds a bit tacky, but the stuff he uses – string arrangements and little parts and little tiny ideas, that’s a really good addition.”

Price has been a lot more hands on with the upcoming EP, however (recently recorded in LA), and the band have been saving some of their favourite gems for this new release in the New Year. “We were holding some stuff back, you know. That’s how we came up with EP 1,” explains Kern. “We had no fans; starting from nowhere so we didn’t want to put out our best songs, just kind of build it.”

“These guys are such solid producers, that when you mix what they do, with someone like Stuart, it’s almost unthinkable to add someone else on top as well,” says Gabriel, when asked if anyone else was involved in production. “We’re quite OCD, I think,” adds Kern. “So we can’t just give someone a demo, we kind of have to give the whole idea of arrangements and parts, and we ended up getting used to that.”

And now they have EP 2 in the bag, “Yes! Just back from the city of angels,” tells Arthur. “Was an unbelievable experience, man. Surreal to think that the songs that we wrote in a windowless cotton mill in dreary fucking Manchester, we were now recording in one of the most prestigious places in the world.” Following in the footsteps of Carole King, Paul McCartney, Tom Petty and Kings of Leon at Jim Henson Studios, no less, before heading over to MDDN Studios (owned by the Madden Brothers) to record vocals. “They have this amazing studio they bought off Will Smith over in Burbank,” continues Arthur. “They were stellar fellas. Had decent whiskey too!

“All four of us had the most surreal 10 days of our lives. Getting to touch Carole King’s crystal was a pretty sizeable highlight. When we walked in there was this big white rock stuck to the wall and we were told right away it belonged to Carole King. Apparently it had mystical powers. If you listen closely to the record when it comes out you’ll probably be able to hear it on the record, was a fucking mystical crystal that thing!”

We’ll have to wait to hear the results of Carole King’s mystical crystal thing, but in the meantime you can catch FACE at Queen of Hoxton this Saturday, November 26th, or out on tour with Youth Club this December. Tickets available HERE.