Happyness have just announced their upcoming sophomore album, Write In, and released a new video for latest single, ‘Falling Down’.

Visuals for ‘Falling Down’ were filmed by the band, as guitarist, Benji Compston, explains, “A friend of ours manages a cinema (shoutout Nyla!) and she gets free use of it every Monday night when the public have left. We showed up at midnight with an old TV and some musical equipment and a vague plan to shoot a Spiegel Im Spiegel effect with the cinema screens. Special credit should probably also go to the coffee machine.”

The impressive DIY ethos carries through to the artwork for the upcoming album cover, which was created by the band’s own Jon EE Allan, while the record was made in the band’s own studio above a now-abandoned bookshop. Drawing on influences such as Roxy Music, The Beach Boys, Randy Newman, Sonic Youth, Big Star and Pierre Cavalli, the album was finished and mixed with Adam Lasus at his LA home studio.

“I’d like to think this record looks outside the little American alt-rock sphere we were looking in on,” says Allan. “I think we used to be very afraid of being earnest. And now we’re able to be tender or heartfelt without feeling too guilty about it. This record cost us about £500 to make, and that was mainly spent on an eight track tape recorder and a dehumidifier. We self-produced it in our studio [the affectionately named ‘Jelly Boy Studios’, where the band also recorded their debut, Weird Little Birthday]. The building’s being redeveloped at the end of the year, so this is the last record we’ll make there, which feels like the end of a chapter for us.”

We’re also loving their video session for Yala! Records, featuring co-founder, Felix White (The Maccabees), on album closer, ‘Tunnel Vision On Your Part’. Kudos to left-handed White, who had to play a right-handed bass upside down.

Happyness – completed by drummer, Ash Cooper – kick off a headline tour at The Hope & Ruin in Brighton on April 18th, with a Dublin show at Whelan’s on the 21st. The tour wraps up in London with their biggest show to date at The Dome in Tufnell Park, “The April tour’s our first UK headline tour for a while now,” says Compston, “and for the first time we’ll have two albums to play from so we’re looking forward to it a lot. We’ve got a lot of expensive ideas for stage props that we probably won’t be able to realise by April.”

Write In is set for release on April 7th via Moshi Moshi Recordings (Bar/None in US). Pre-order HERE. 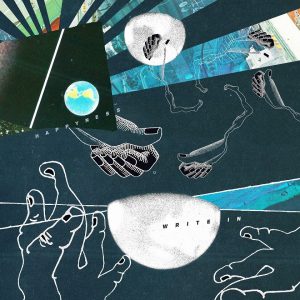