High Wycombe’s alternative-rock five piece, SALT, have released their latest single, ‘Don’t Look At Me That Way’ – an anthemic slice of stadium leaning rock. FMS Magazine caught up with the band to see how things are going, following the release of the video and their debut EP, Pierman.

Jack Reynolds (guitar/backing vocals) and Frankie Lord (lead singer/lyricist) formed the band in 2014, the result of jamming sessions and the encouragement of friend and former band member Tom Earley. Ryan Morritt quickly joined on drums before transitioning to guitar, and finding Dean Ward to replace him on percussion. The final piece of the puzzle was quickly slotted in, with Sam Brockland on bass.

They define their sound as alternative, story driven rock, drawing comparison with Kings of Leon and The Stooges, and this is clear from ‘Don’t Look At Me That Way’. The track is a ballad of longing for a distant partner, as its shredding guitars, powerful chorus and rolling rhythm build towards the thunderous climax. The band talk of the admiration they hold for the Beatles, if not necessarily for the direct influence they have on their sound, but certainly in their approach to making music. The sense that they, “weren’t afraid to move forward and change their song writing styles” is something that SALT hope to channel, and whilst Frankie has commented modestly that, “if the Beatles were bigger than Jesus, then we might just about be on par with Ant-Man,” their sound carries greater ambition.

To date, SALT have released an EP, Pierman, which combines the same mix of heavy rock, blues and alt influences with the distinctive vocals of Lord. The artwork also shares the same striking visuals as the ‘Don’t Look At Me That Way’ video. Talking of the initial inspiration, “Frankie was going on about some idea of a girl rising up from a bath with all multi-colour fluorescent paints.” Whilst the expense of fully exploring that idea was beyond the band they sought alternatives and found a water dye that reacts with backlight and glows a fierce green. The result was such a success that it was taken forward to the music video and the resulting contrast of monochromatic video with the splashes of colour is startling, particularly when filmed on the band and their instruments.

This resourcefulness and creativity is a key factor for a young, emerging band. SALT have already enjoyed some memorable highlights, including BBC Introducing sessions and a range of festival appearances. One highlight the band pick out in particular was the opportunity to record at Abbey Road Studios, thanks to an online competition. Dean had entered some of their demo’s into a competition, without letting the rest of the band know, and they ran out winners of a recording session. These early highs are only the start for SALT as they look towards the next 12 months, promoting their EP, and playing as much as possible. The Abbey Road recordings are mastered and ready for release, and beyond that there is the promise of more writing and recording, and hopefully new releases.

The video for ‘Don’t Look At Me That Way’ was directed by Peter Roe with Jesse Llande as director of photography.

Pierman is out now and available to purchase HERE and a free download of the single is HERE. 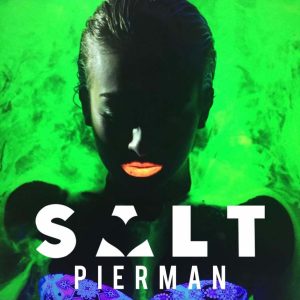